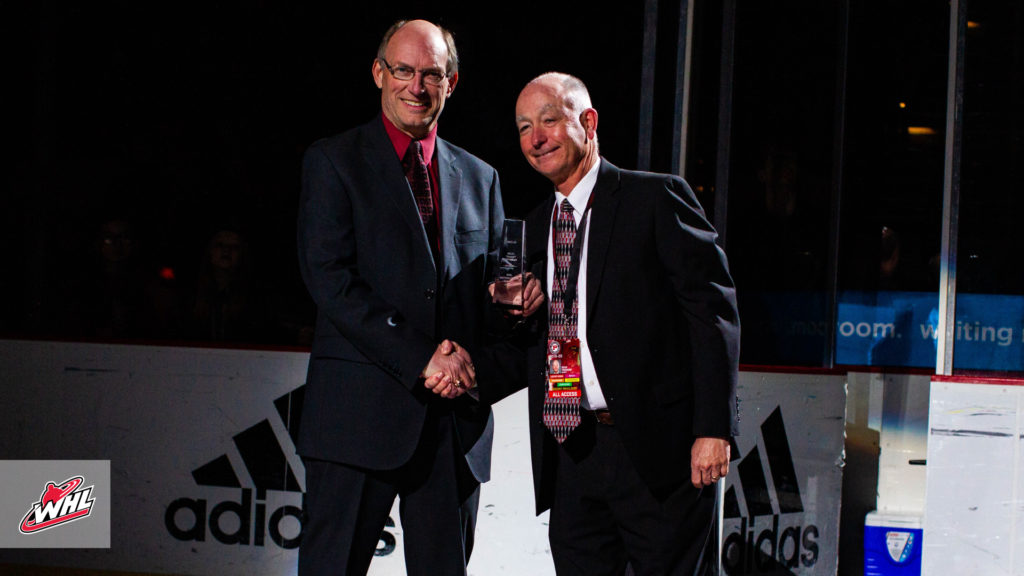 Portland, Ore. – Western Hockey League Commissioner Ron Robison announced today, on behalf of the WHL Board of Governors, that Dean “Scooter” Vrooman, the former play-by-play voice of the Portland Winterhawks, has been named a recipient of the WHL Distinguished Service Award for the 2019-20 WHL season.

Vrooman was honoured by WHL Vice-President of Hockey Richard Doerksen in Portland during a special ceremony prior to Saturday’s game between the Winterhawks and Victoria Royals.

“Having served in many capacities with the Portland Winterhawks organization for 32 years, ‘Scooter’ embodies what the WHL Distinguished Service Award is all about,” commented WHL Commissioner Ron Robison. “From his role as play-by-play voice of the Winterhawks, to serving an important role in corporate partnerships, ‘Scooter’ has endeared himself to the Portland sports community and has left a last impression on the Winterhawks franchise. He is truly a deserving recipient of the WHL Distinguished Service Award.”

Serving as the play-by-play voice of the Winterhawks for 26 seasons, Vrooman called thousands of games for the club between 1982 and 2008. He called the club’s triumph at the 1983 Memorial Cup on home ice as well as their WHL Championship and Memorial Cup victories in 1998. As hockey gained increased popularity in the U.S. Pacific Northwest, Vrooman played a critical role in delivering that message, becoming synonymous with the sport of hockey for Oregonians.

“There is nothing more gratifying than seeing someone like Dean “Scooter” Vrooman receive the recognition he deserves for his decades of great service to the Portland Winterhawks and the WHL,” said Doug Piper, President of the Portland Winterhawks. “The years he spent as the radio voice of the Hawks have left an indelible mark on the history of our franchise. We congratulate Scooter for receiving the Distinguished Service award.”

Vrooman also served in a key community role with the Winterhawks, handling corporate partnerships to ensure the club’s financial stability as well as their long-term success in Portland. He was the de-facto representative for the club at local schools, youth centers, and charity events, helping introduce the sport to thousands of children and adults.