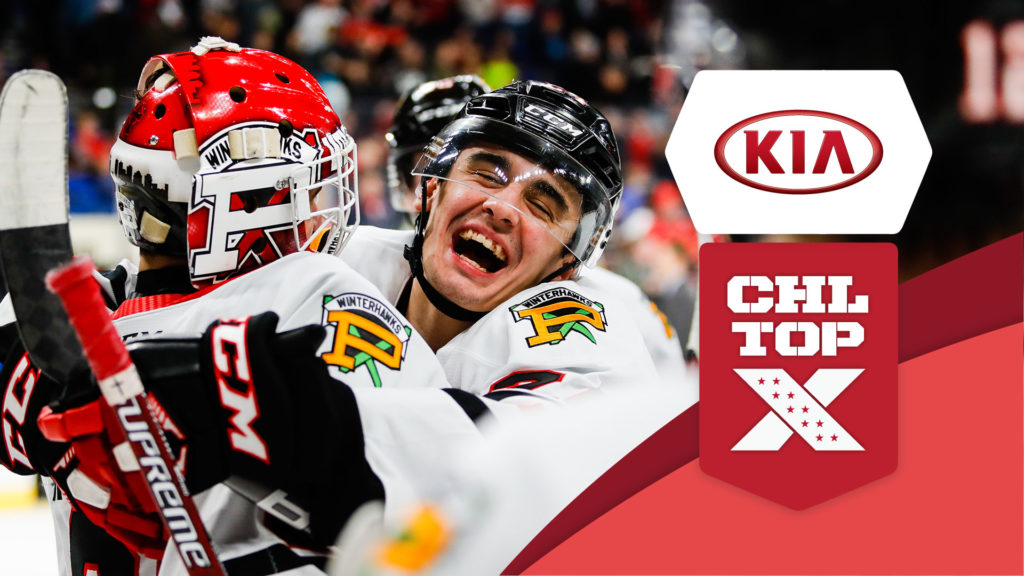 Toronto, Ont. – The Canadian Hockey League today announced the week 18 edition of the Kia CHL Top-10 Rankings for the 2019-20 season. The weekly rankings of the CHL’s Top-10 teams are selected by a panel of National Hockey League scouts.

Another perfect week has vaulted the Portland Winterhawks to the top spot in the Western Hockey League as well as the second spot in this week’s rankings. Portland extended their undefeated-in-regulation streak to 19 games (17-0-1-1) on the strength of a 5-3 win against the Spokane Chiefs Friday as well as 7-0 and 3-2 triumphs over the Kelowna Rockets Saturday and Sunday at home. The team’s new-look goaltending tandem of Winnipeg, Man. products Joel Hofer and Dante Giannuzzi continued to frustrate defences, with the highlight of the weekend coming via Giannuzzi’s first-ever WHL shutout. His 17-save performance against the Rockets Saturday moved his record to 5-0-0-0 this season while maintaining a 1.59 goals-against average, 0.933 save percentage, and one shutout. Portland returns to action on Friday, January 24 (7 p.m. PT), playing host to the Tri-City Americans at the Moda Centre.

Leading the WHL’s Eastern Conference and Central Division, the Edmonton Oil Kings reclaimed the fifth spot for this week’s rankings. The Oil Kings split their pair of weekend games, losing a 2-1 overtime contest to the Prince Albert Raiders Friday before doubling up the Medicine Hat Tigers Sunday by a 4-2 score. Having extended their undefeated-in-regulation streak to eight games (6-0-1-1), the Oil Kings hold a nine-point lead over the aforementioned Tigers for first place in the Central Division. Sunday’s win was sparked by a natural hat trick from Riley Sawchuk as the 20-year-old recorded the ninth multi-goal game of his WHL career. The Oil Kings will begin a three-game road trip through Saskatchewan on Wednesday, January 22 (7 p.m. CT) against the Swift Current Broncos.

Placing seventh for a second-consecutive week were the Kamloops Blazers. The Blazers widened their lead in the B.C. Division standings to 10 points with a 12-3 and 9-0 wins against the Tri-City Americans as well as a 4-0 topping of the Vancouver Giants Sunday. Entering Wednesday’s play, the Blazers are just one of three teams to rank in the top five for both the league’s home and away records, sharing the honour with the Winterhawks and Oil Kings. The Blazers will head to northern British Columbia for their next pair of games, taking on the Prince George Cougars. Puck drop for the first of the two games is on Friday, January 24 (7:00 p.m. PT).

Immediately behind the Blazers in the rankings are the Everett Silvertips. The Silvertips kept pace with the top teams in the division, rolling through a perfect weekend with a 3-2 win against the Rockets and back-to-back shutouts against the Seattle Thunderbirds, winning 8-0 Saturday and 2-0 Sunday. Dustin Wolf’s incredible performance between the pipes vaulted him into the record books with the 17th and 18th shutouts of his WHL career. The Calgary Flames prospect now places in a tie for ninth among all-time shutouts in WHL history, eight behind the league record of 26, which is held by former teammate Carter Hart and former Vancouver Giant Tyson Sexsmith. The Silvertips are back in action on Wednesday, January 22 (7:05 p.m. PT) as they take to the road against the Spokane Chiefs.

Earning an honourable mention for another week were the Tigers, who split their pair of weekend games. They downed the visiting Lethbridge Hurricanes 6-2 Saturday and dropped a 4-2 decision to the Oil Kings Sunday. A natural hat trick as part of a four-goal game from captain James Hamblin Saturday moved him into a tie for second in the WHL’s scoring race with 69 points (27G-42A) through 44 games. Hamblin is now six goals, two assists, and eight points shy of tying career-best totals from last season. Hamblin will look to add to his offensive totals when the Tigers head to northern Saskatchewan for the final time this season, beginning with a date against the Saskatoon Blades on Friday, January 24 (7 p.m. CT).