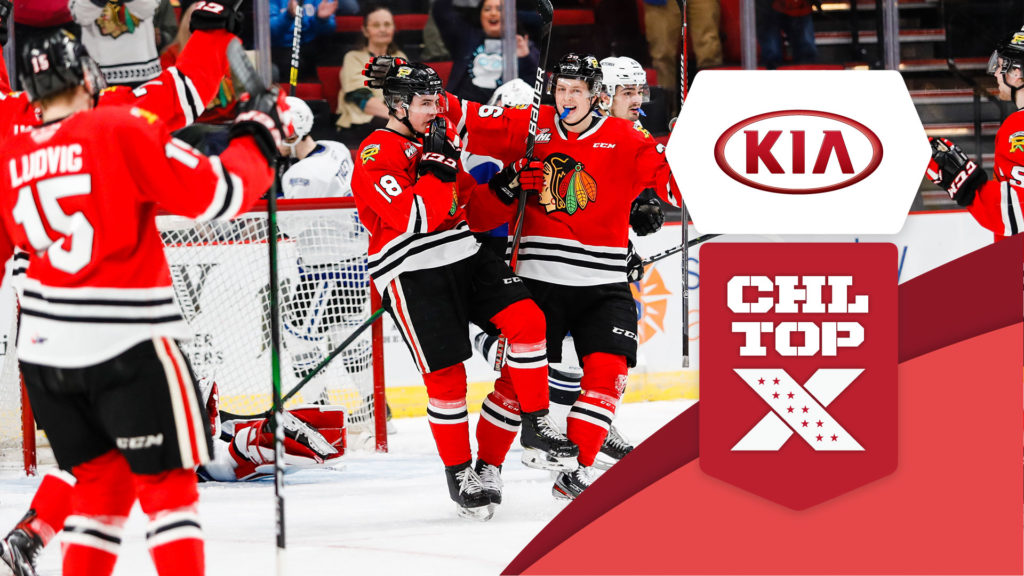 Toronto, Ont. – The Canadian Hockey League today announced the week twenty-five edition of the Kia CHL Top-10 Rankings for the 2019-20 season. The weekly rankings of the CHL’s Top-10 teams are selected by a panel of National Hockey League scouts.

Rising two spots to the fourth spot in this week’s rankings are the Portland Winterhawks, who lead the U.S. Division, Western Conference, and WHL’s overall standings with a 45-11-3-4 record through 63 games, giving them 97 points. Topping the Tri-City Americans 11-2 on Wednesday, the Winterhawks also scored a 5-4 win in overtime and 4-1 regulation win against the Victoria Royals on the weekend. Sunday’s victory confirmed the 17th time in club history that the Winterhawks had earned 45 or more victories in a single season. The Winterhawks are on the road in their next matchup, taking on the Spokane Chiefs on Friday, March 13 (7:05 p.m. PT) at Spokane Veterans Memorial Arena.

Earning the fifth-place ranking this week, the Everett Silvertips continued to contend for the top spot in their division, conference, and the WHL’s overall standings with a 46-13-3-1 record through 63 games, giving them 96 points. The Silvertips shutout the Americans by a 6-0 score Friday before splitting a home-and-home set against the Seattle Thunderbirds with a 5-2 loss and a 3-2 win. The past week has been an exciting one for the Silvertips, who saw all three overage players sign three-year, entry-level contracts. Captain Bryce Kindopp signed with the Anaheim Ducks, while defencemen Jake Christiansen and Wyatte Wylie signed with the Columbus Blue Jackets and Philadelphia Flyers, respectively. The Silvertips will return to action on Friday, March 13 (7:05 p.m. PT) against the Americans at the Toyota Center.

In the eighth spot this week, the Edmonton Oil Kings continued to hold onto the rank of the top team in the WHL’s Central Division and Eastern Conference with a 42-12-6-4 record through 64 games, giving them 94 points. The Oil Kings took a 6-2 loss from the Spokane Chiefs to open the week, rebounded with a 4-1 win over the Swift Current Broncos, and then dropped a 4-1 decision to the Medicine Hat Tigers to close out the week. Closing in on the final two weekends of WHL regular season action, the Oil Kings have the best home winning percentage of any Eastern Conference team, sporting a 24-5-2-1 record through 32 games. The Oil Kings will take to the road in their next contest, facing the Lethbridge Hurricanes on Friday, March 13 (7 p.m. MT) at the ENMAX Centre.

Debuting in the 10th spot this week, the Spokane Chiefs continued to ride a wave of momentum with a 41-18-4-1 record through 64 games, giving them 87 points. Locked into third place in the WHL’s U.S. Division, the Chiefs are finishing the regular season strong with a 10-game winning streak. The Chiefs’ week featured a 6-2 win over the Oil Kings, 5-1 win against the Red Deer Rebels, a 6-3 triumph against the Calgary Hitmen, and a 3-0 win over the Kamloops Blazers. Tuesday win against Kamloops was significant as it saw Los Angeles Kings prospect Lukas Parik score the ninth-ever goal by a goaltender in WHL history. Parik made the night even more momentous by recording a 36-save shutout, becoming the first WHL goaltender to score a goal and record a shutout in the same game. The Chiefs will play their final two home games of the regular season this weekend, beginning Friday, March 13 (7:05 p.m. PT) when they play host to the Winterhawks at Spokane Veterans Memorial Coliseum.

Earning an honourable mention this week were the Blazers, who hold a record of 41-18-3-1 through 63 games for 86 points. The Blazers extended their winning streak to six games with a win over the Lethbridge Hurricanes Friday and a pair of road wins against the Americans, but saw it end Tuesday with a 3-0 loss to the Chiefs. The good news for the Blazers over the week was their clinching of the B.C. Division, claiming the title for the first time since 2012. Scheduled to play three of their final five games at home, the Blazers will play host to the Kelowna Rockets on Friday, March 13 (7 p.m. PT) at the Sandman Centre.