Winterhawks’ Ludvig named WHL On the Run Player of the Week 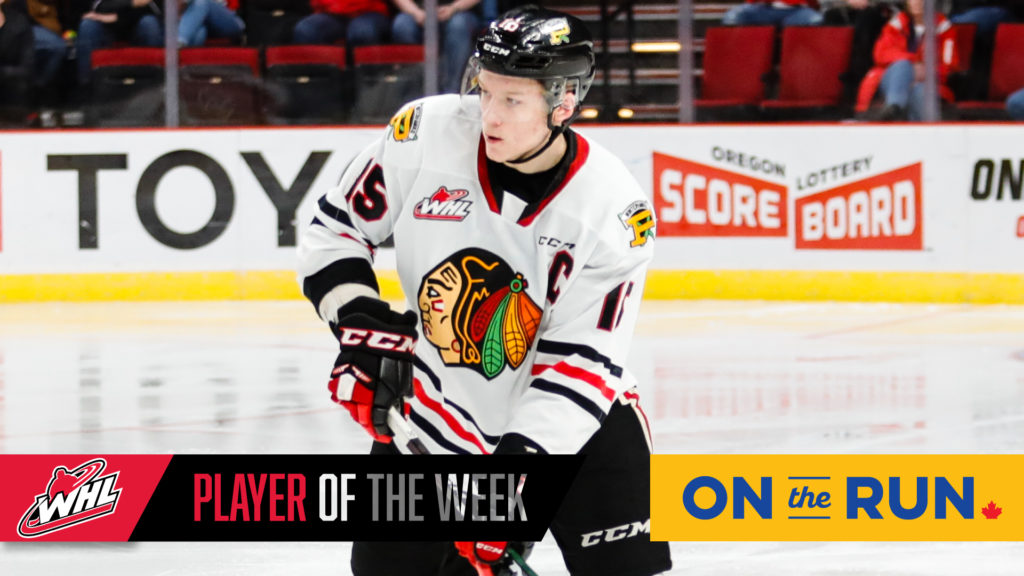 Calgary, Alta. – The Western Hockey League announced today that Portland Winterhawks captain Johnny Ludvig has been named the WHL On the Run Player of the Week for the week ending February 9, 2020.

Ludvig recorded nine points (2G-7A) and a plus-two rating this week as the Winterhawks earned five of a possible six points from their three games. With a record of 37-7-3-4 through 51 games, the Winterhawks became the first team to clinch a spot in the 2020 WHL Playoffs last week.

In a 7-6 overtime loss to the Spokane Chiefs Tuesday, Ludvig registered a goal and four points. Ludvig scored Portland’s third goal of the contest while picking up assists on their first, fifth, and sixth goals. He was named the second star of the game for his performance.

Friday, Ludvig tallied a goal and three points as the Winterhawks opened a weekend road set against the Kelowna Rockets with a 7-3 win. Ludvig scored Portland’s seventh goal of the contest and assisted on their second and sixth goals as well, picking up honours as the second star of the game.

Closing out his week with a 4-2 win against the Rockets Saturday, Ludvig posted a pair of assists. He picked up helpers on Portland’s second and third goals to help provide the difference in the game.

A 6-foot-1, 205-pound product of Kamloops, B.C., Ludvig is enjoying a career year with the Winterhawks. The 19-year-old has recorded 52 points (16G-36A) in 51 games, including eight power-play goals and one game-winning goal.

The Florida Panthers chose Ludvig in the third round, 69th overall, at the 2019 NHL Draft. Originally listed by the Winterhawks, Ludvig has recorded 77 points (23G-54A) in 160 WHL regular season games, including eight power-play goals and two game-winning goals. In 14 WHL playoff games with the Winterhawks, he’s recorded four points (1G-3A), including one game-winning goal.

The Winterhawks return to action on Friday, February 14 (7 p.m. PT), playing host to the Spokane Chiefs at the Moda Centre.