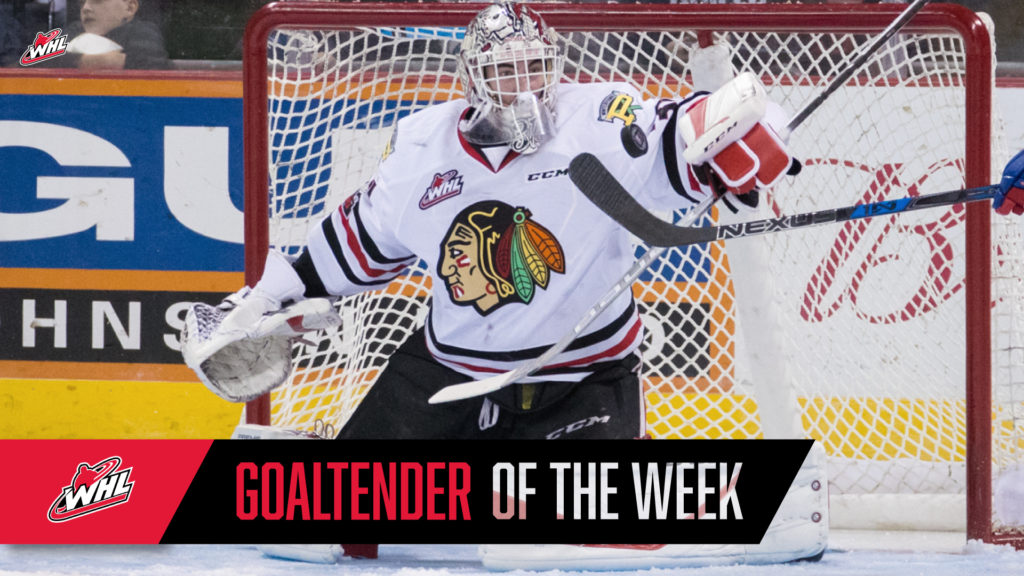 Kehler, a 6-foot-4, 203-pound product of Altona, Man. led the Winterhawks to three wins in four days, becoming the first WHL goaltender to win the weekly award twice this season.

Wednesday against the Prince George Cougars, Kehler made 30 saves in a 2-1 victory for the Winterhawks, shutting down the Cougars’ offence as Portland made their successful comeback bid. He was named the first star for his efforts in the game.

Friday, Kehler was sharp in the crease once again, making 47 saves on the road against the Spokane Chiefs in a 4-1 victory. The Winterhawks were able to grab a 3-1 lead after 20 minutes, with Kehler stopping all 40 shots faced in the second and third period combined to preserve the win. For his efforts, Kehler was named the first star at the Spokane Veterans Memorial Arena and named the second star in the WHL’s nightly three stars.

Saturday, Kehler made his 100th career WHL game a memorable one, stopping 43 shots in a 3-1 road victory over the Everett Silvertips. Kehler stopped all 26 shots over the first two periods and then allowed just one goal on 18 shots in the final period to keep the Silvertips at bay.

His start this year though has him on track for a career year. Through 12 games, Kehler has a 10-2-0-0 record with a 2.09 goals against average and 0.935 SV% with one shutout. He currently ranks first among WHL goaltenders this season in both goals against average and SV% while sitting in a three-way tie for wins, one behind the league leader. He’s also tied for second place in the league for shutouts. Kehler attended the NHL Rookie Camp of the Winnipeg Jets earlier this year.

Kehler and the U.S. Division-leading Winterhawks will look to extend their three-game winning streak Saturday, November 11 (6:00 PST) when the Winterhawks host the Tri-City Americans at the Moda Center.