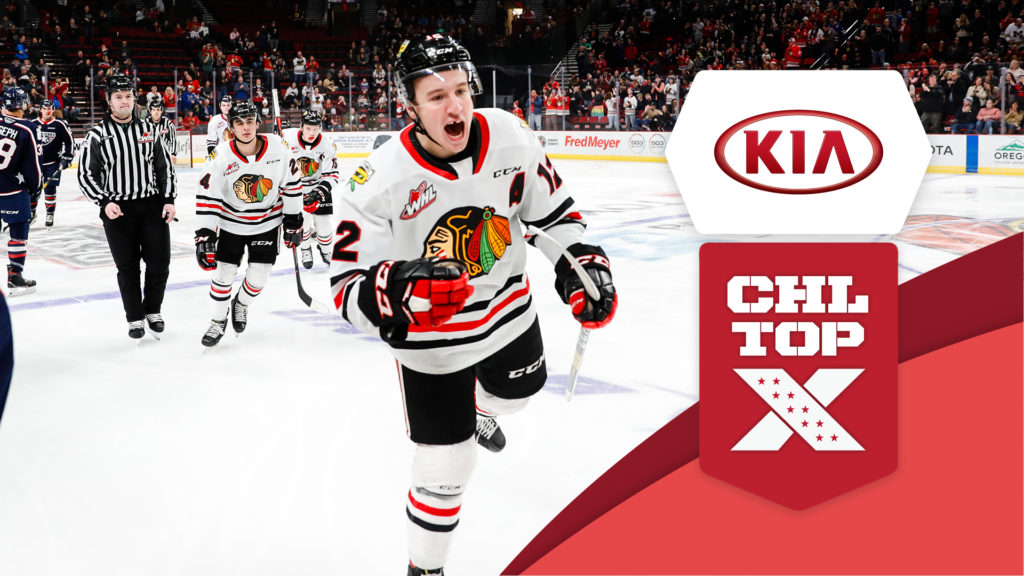 Toronto, Ont. – The Canadian Hockey League today announced the week 19 edition of the Kia CHL Top-10 Rankings for the 2019-20 season. The weekly rankings of the CHL’s Top-10 teams are selected by a panel of National Hockey League scouts.

Holding down the second spot for another week are the league-leading Portland Winterhawks, the top-ranked team from the Western Hockey League. The Winterhawks rolled through another perfect week with a pair of wins, downing the Tri-City Americans 8-2 and topping the Seattle Thunderbirds 6-5 in a shootout. 2020 NHL Draft prospect Seth Jarvis continued his outstanding season with nine points (4G-5A) throughout the pair of games, giving him 28 points (11G-17A) in nine games through the month of January. His performance earned Jarvis the honours as WHL On the Run Player of the Week. Portland will put their 19-0-1-1 streak and seven-game winning streak on the line when they take on the Everett Silvertips on Friday, January 31 (7:35 p.m. PT) at Angel of the Winds Arena.

Standing firm in the fifth spot this week are the Edmonton Oil Kings. The Oil Kings’ week featured three wins in four games as they earned a 5-3 result over the Swift Current Broncos, a 3-2 win against the Saskatoon Blades, a 6-2 win against the Brandon Wheat Kings, and a 3-2 setback against the Prince Albert Raiders. As part of a superb second season in the WHL, 2020 NHL Draft prospect Jake Neighbours extended his point streak and assist streak to five games. Neighbours leads the Oil Kings with 10 assists in the month of January. Having completed their schedule for the calendar month, Edmonton will return to action on Saturday, February 1 (7 p.m. MT) when they play host to the Winnipeg ICE at Rogers Place.

Moving up one placing, the Everett Silvertips occupy the seventh spot in this week’s Kia CHL Top 10 Rankings. In their three games, the Silvertips collected five of a possible six points, taking a 3-2 loss in overtime Wednesday against the Spokane Chiefs, picking up a 2-1 win against the Vancouver Giants Thursday, and earning a 4-1 result on home ice against the Chiefs Sunday. Thursday’s win was their 16th one-goal victory of the season, which has them tied for first place among WHL teams in that statistic. In a meeting of the top two teams in the U.S. Division, the Silvertips will host the Winterhawks on Friday, January 31 (7:35 p.m. PT) at Angel of the Winds Arena.

Sliding a single spot to eighth this week were the Kamloops Blazers. The B.C. Division leaders split their pair of weekend games in northern British Columbia, shutting out the Prince George Cougars 3-0 Friday before dropping a 3-1 result Saturday. While the Blazers’ conference-leading offence is due to the team’s usual contributors, defenceman Max Martin and 2020 NHL Draft prospect Josh Pillar have stepped up in January. Martin has produced 14 points (2G-12A) to rank second in scoring among all WHL defencemen in January while Pillar has produced 11 points (5G-6A) in 10 games, including two of their four goals from the weekend. Kamloops will close out their month on Wednesday, January 29 (7 p.m. PT), playing host to the Chiefs at the Sandman Centre.

Earning an honourable mention this week are the Lethbridge Hurricanes. The Hurricanes’ offence shone brightly in three games as they recorded a 7-1 win against the Moose Jaw Warriors Wednesday, enjoyed a 7-2 triumph against the Regina Pats Friday, and topped the Wheat Kings 6-5 in overtime Saturday. The quartet of Dylan Cozens (Buffalo Sabres), Calen Addison (Pittsburgh Penguins), as well as 2020 NHL Draft prospects Oliver Okuliar and Alex Cotton continued to account for the main source of the team’s offence. Second-year forward Justin Hall has also impressed in January, posting 12 points (4G-8A) through nine games to tie for second in team scoring. The Hurricanes will put their three-game winning streak on the line against the Prince Albert Raiders on Friday, January 31 (7 p.m. CT) at the Art Hauser Centre.