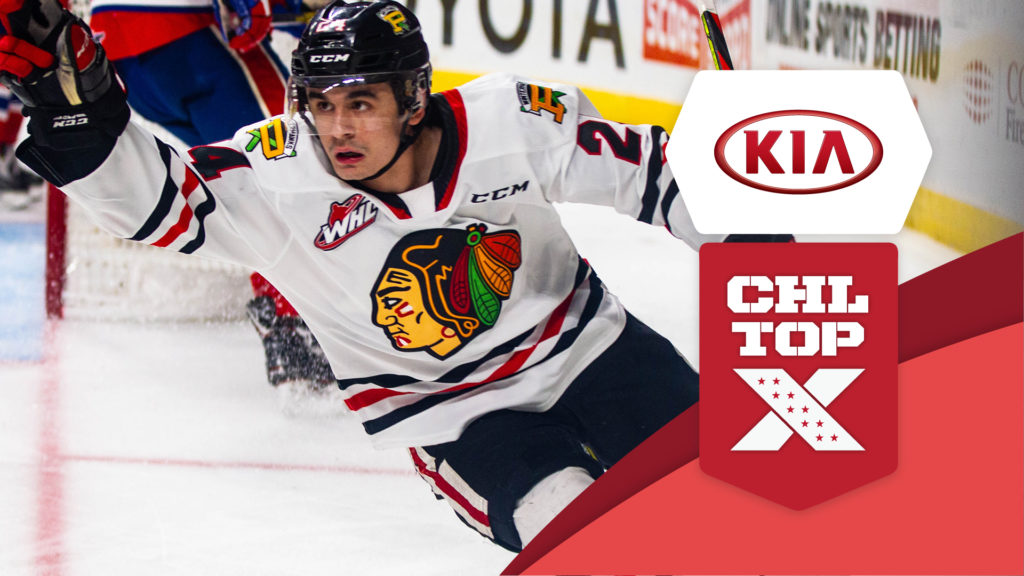 Toronto, Ont. – The Canadian Hockey League today announced the week 22 edition of the Kia CHL Top-10 Rankings for the 2019-20 season. The weekly rankings of the CHL’s Top-10 teams are selected by a panel of National Hockey League scouts.

With an unchanged top three, the Portland Winterhawks remained one of the top-ranked teams in the CHL and the top-ranked team from the Western Hockey League. Playing three games on the weekend, the Winterhawks experienced both sides of 4-1 results, beating the Spokane Chiefs and losing to the Everett Silvertips. Sunday, they topped the Moose Jaw Warriors by an 11-2 score on home ice. With a five-point effort in Sunday’s game, 2020 NHL Draft prospect Seth Jarvis was named the WHL On the Run Player of the Week Monday. Having already secured a berth in the 2020 WHL Playoffs, the Winterhawks will now work towards claiming their first U.S. Division title since 2014. They’ll play host to the Seattle Thunderbirds in their next game on Friday, February 21 (7 p.m. PT) at Veterans Memorial Coliseum.

Moving into fifth place this week were the Edmonton Oil Kings, who continue to lead the WHL’s Eastern Conference and Central Division. After dropping a 5-3 result to the Regina Pats Friday, the Oil Kings responded with a 5-2 win against the Medicine Hat Tigers and a 5-3 win against the Lethbridge Hurricanes. Monday’s Family Day win against the Hurricanes was cemented by the first hat trick of Josh Williams’ WHL career. The Oil Kings are venturing to Manitoba for the final time in the regular season, taking on the Winnipeg ICE Wednesday before facing the Brandon Wheat Kings at Westoba Place on Friday, February 21 (7:30 p.m. CT).

Staying put in seventh place this week are the Everett Silvertips. The Silvertips won both their weekend home games, doubling up the Thunderbirds 2-1 Friday before topping the Winterhawks 4-1 Saturday. Defenceman Jake Christiansen recorded three assists over the pair of games to extend his point streak to eight games, with 15 points (6G-9A) in that span. The Silvertips play host to the Moose Jaw Warriors on Wednesday, February 19 (7:05 p.m. PT) at Angel of the Winds Arena.

Taking one of three honourable mentions this week, the Lethbridge Hurricanes continued to rank as one of the top teams in the WHL. Lethbridge split a pair of weekend games in southern Alberta against the Winnipeg ICE, winning 5-4 and losing 5-2 before taking a 5-3 defeat Monday afternoon in the provincial capital. Despite the tough results, the Hurricanes still became the fifth team to clinch a spot in the 2020 WHL Playoffs Monday. They return to the ice tonight, playing host to the Spokane Chiefs at the ENMAX Centre.