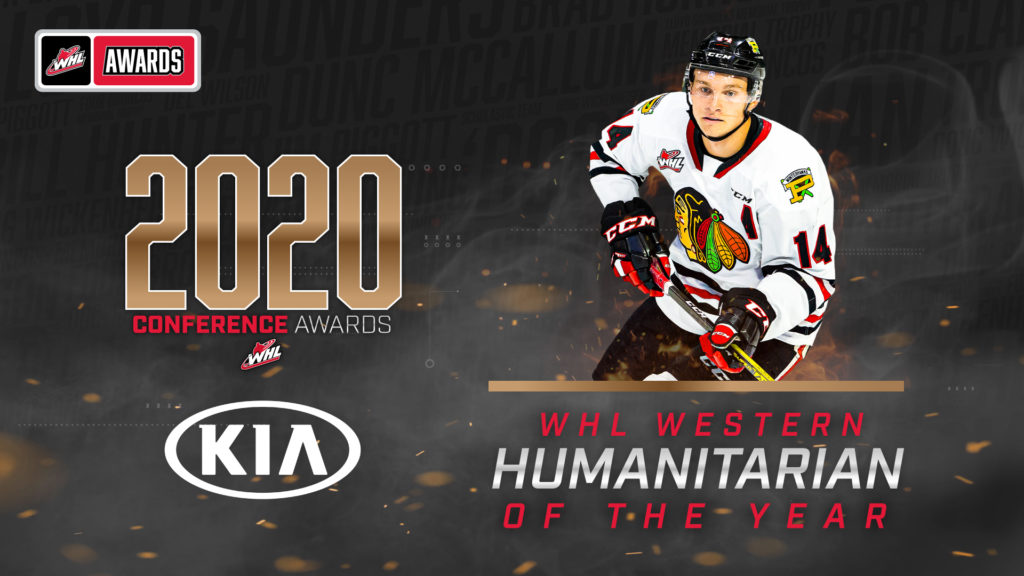 Gricius, a 20-year-old product of Colorado Springs, Colo., made valuable use of his final season with the Winterhawks by giving back to the community he’s called home since 2016.

In the summer of 2019, Gricius reached out to an organization called Specialty Ability Training, which is a group of personal trainers who exclusively train individuals with special needs. In coordination with the owner, Ryan Lockard, Gricius organized a team trip to an assisted-living facility where players went on a tour and interacted with clients of the program. Gricius took initiative throughout the process to help integrate players and clients during the visit.

During the season, Gricius also organized for Specialty Athletic Training to attend a Winterhawks game to gain a wider perspective of athletic enrichment. Further strengthening the Winterhawks’ ties to the community, Gricius has promoted positive health and inclusivity within Portland and the hockey community through the partnership.

Connecting with youth to provide a positive role model, Gricius has visited the Ronald McDonald House Charities of Oregon and Southwest Washington, meeting with kid captains from the Winterhawks’ Hockey Challenge program. The program raises funds through a silent auction and charity hockey game featuring top fundraisers as well as Winterhawk alumni.

Gricius can often be found donating his time to other local charities, including the Oregon Food Bank, Friends of Tress, and Union Gospel Mission to help out those in need.

Attending practices and assisting with skill building in Winterhawks Junior Hockey, Gricius has connected with youth through the sport of hockey to provide positive leadership in an athletic setting.

WHL Eastern and Western Conference Humanitarians of the Year are voted upon annually by WHL General Managers and Head Coaches.

The Doug Wickenheiser Memorial Trophy for WHL Humanitarian of the Year is presented annually to the WHL player who helps to enhance the community they play in. The trophy is named in memory of former Regina Pats captain Doug Wickenheiser. Playing three seasons with his hometown Pats, Wickenheiser recorded 352 points (158G-194A) in 207 WHL regular season games. While noted for his skills on the ice, Wickenheiser was often recognized for his caring and generous nature away from the rink. The Doug Wickenheiser Arena in Regina carries on Doug’s spirit of giving to this day.