Winterhawks’ Gricius named WHL On the Run Player of the Week 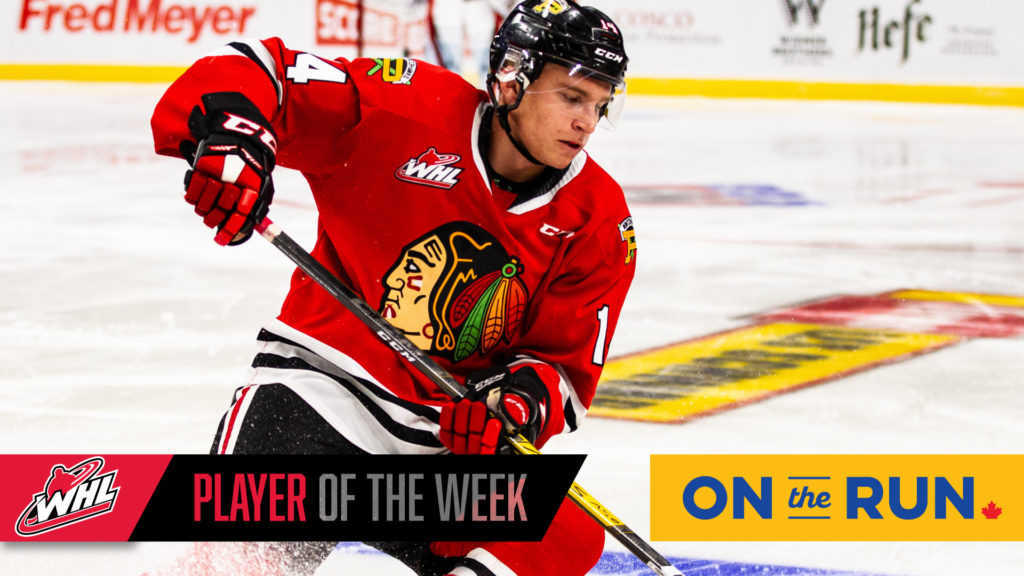 Calgary, Alta. – The Western Hockey League announced today that Portland Winterhawks forward Jake Gricius has been named  the WHL On the Run Player of the Week for the week ending October 27, 2019.

Gricius recorded seven points (3G-4A) and a plus-four rating in two games this week as the Winterhawks enjoyed victories against the Prince Albert Raiders and Spokane Chiefs. The pair of wins extended the team’s winning streak to three games and moved them to within a single point of the Everett Silvertips for the lead in the U.S. Division.

In Wednesday’s 4-3 win against the Raiders, Gricius recorded a goal and an assist, scoring their third goal and picking up a helper on the team’s final goal of the game. For his performance, Gricius earned third-star honours.

Saturday, Gricius posted a career-high five points in a 6-3 win over the Chiefs. The 6-foot-3, 200-pound product of Colorado Springs, Colo. Scored the fifth and sixth goals of the game for Portland, adding assists on their first three goals. His career night earned Gricius the first star of the game, first star of the night in the WHL, and the Canadian Hockey League’s Player of the Night honours.

Listed by the Winterhawks, the 20-year-old Gricius is producing at a career-best rate with 15 points (5G-10A), including one power-play goal, in 12 games during the 2019-20 WHL Regular Season.

Up next for Gricius and the Winterhawks is a duel against the division-leading Silvertips on Friday, November 1 (7:35 p.m. PT) at Angel of the Winds Arena.