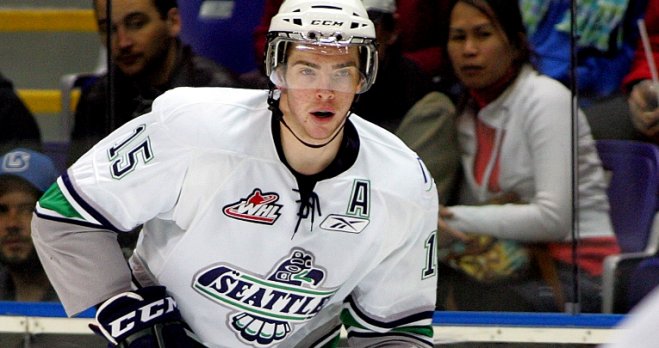 Portland, OR – The Portland Winterhawks have acquired forward Marcel Noebels, 19, from the Seattle Thunderbirds in exchange for first round picks in the 2012 and 2013 WHL Bantam Drafts, and forward Seth Swenson.

“Marcel is a proven scorer in this league who will be a tremendous addition to our offensive core. He can play the power game as well, and will fit in well with our group,” said Portland Winterhawks General Manager & Head Coach Mike Johnston. “We’d like to thank Seth for his contributions to the team, and wish him the best as he continues his career in Seattle.”

Swenson was in his third season in Portland, and in 132 games had posted five goals and 16 assists for 21 points.

In a separate trade, the Winterhawks acquired the rights to goaltender Brendan Jensen from the Vancouver Giants in exchange for a sixth round pick in the 2013 Western Hockey League Bantam Draft.

“We just could not pass up the offer that was made,” said Farwell. “We add a younger player and two high draft picks. Marcel has been a very good player for us and we wish him good luck going forward with his career.”

Swenson, an 18-year-old right wing from Parker, Colorado, has appeared in 33 games this season for the Winterhawks and has one goal and six assists for seven points. Swenson is in his third year in the WHL and has played in 132 games and has five goals and 16 assists with 64 penalty minutes.

Noebels, from Tonisvorst, Germany, has appeared in 34 games for the T-Birds this season and has 10 goals and 14 assists for 24 points. The T-Birds selected Noebels in the first round, 10th overall, of the 2010 CHL Import Draft. Last season with the T-Birds Noebels had 56 points on 28 goals and 26 assists.

The T-Birds travel to Kamloops to take on the Blazers on Friday at Interior Savings Centre at 7:35pm. They return to ShoWare Center to take on the Portland Winterhawks at 7:05pm on Saturday.