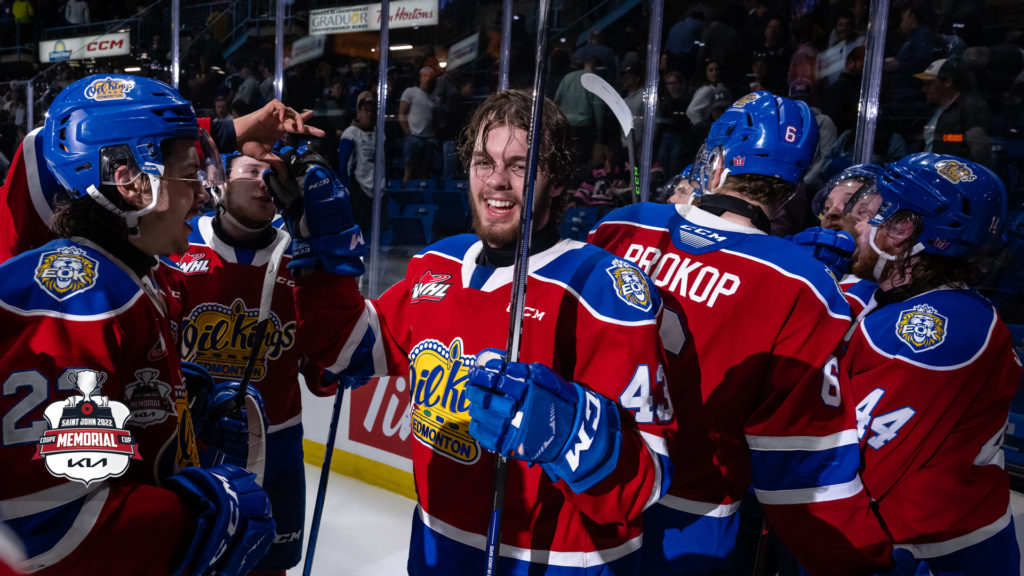 Saint John, N.B. – Jaxsen Wiebe scored a hat-trick, including the overtime winner, as the Edmonton Oil Kings defeated the Saint John Sea Dogs 4-3 at the 2022 Memorial Cup presented by Kia.

The Oil Kings earned two valuable points in the round-robin standings as they earned their first victory of the tournament.

“He’s a big part of our team,” Edmonton head coach Brad Lauer said of Wiebe’s performance, “he plays a heavy game, he works hard, he does the right things and today he was rewarded.”

“I’m proud of our group,” Wiebe said following the game.

“Usually after a loss we’ll come back, bounce back, come back better, and we did that tonight,” he added.

The game started brightly for the WHL Champions, who led 2-0 before the contest was four and a half minutes old.

Jaxsen Wiebe capitalized on a power-play at 2:14, banging a rebound past the outstretched pad of Saint John goalkeeper Nikolas Hurtubise.

But the lead was short-lived, and it was Saint John who had the advantage at the midpoint of the opening frame.

Forwards Raivis Kristians Ansons and Josh Lawrence scored 25 seconds apart to even the score at 2-2 before New York Islanders prospect William Dufour gave the hosts the lead at the 10-minute mark. The Sea Dogs forward snuck down the right wing before wristing a puck past Cossa for his second goal of the tournament.

“They came out hard, we expected that,” Lauer noted, “I thought our guys did the right things at the right time.”

After a frenetic start, the game settled into a tight-checking, low-chance affair.

Wiebe scored his second goal of the contest 2:05 into the middle frame. On an Oil Kings power-play, Souch split the Sea Dogs defence on a rush before wiring a puck off the post. Wiebe grabbed the loose change, evening the score at 3-3.

The third Edmonton tally proved to be the final goal of regulation time, with Saint John holding a 34-24 edge in shots.

Cossa was pressed into duty late in the third period, making a trio of stops to preserve the tie score.

Overtime brought a new phenomenon, never before seen in Memorial Cup history, as the Oil Kings and Sea Dogs skated three-on-three in extra time thanks to new regulations adopted prior to the start of the 2022 tournament.

Edmonton earned breakaway opportunities off the sticks of Souch and Jalen Luypen, while at the other end Cossa denied Saint John’s William Villeneuve and Brady Burns on clear-cut opportunities as the extra session reached fever pitch.

Eight minutes into extra time, Wiebe found space down the right wing, launching a shot past Hurtubise into the top corner of the Sea Dogs net to complete his first career junior hockey hat-trick.

“There’s lots of skating in overtime, I thought ‘might as well get my own little skate in there,’ I skated down the wing, pulled the trigger, and fortunately it went in,” Wiebe said.

“I think the fans got their money’s worth tonight, it was an exciting game to be in for sure,” he added.

“The fans didn’t sit down, did they?” Lauer joked following the game, “entertainment-wise, it was exciting hockey going back and forth. Coaching-wise, maybe not something I like but I get the format, I think it’s fun.”

“I think it’s great for the kids, the kids were having fun with it, that’s what’s important,” he added.

Cossa turned aside 36 shots on the night, while Hurtubise made 27 saves.

Edmonton finished 2/4 on the power play, while Saint John failed to score on four opportunities.

The Oil Kings will close out the round-robin portion of the Memorial Cup Friday, June 24 versus the OHL champion Hamilton Bulldogs (4:00 p.m. MT, TD Station, TSN 1/5).