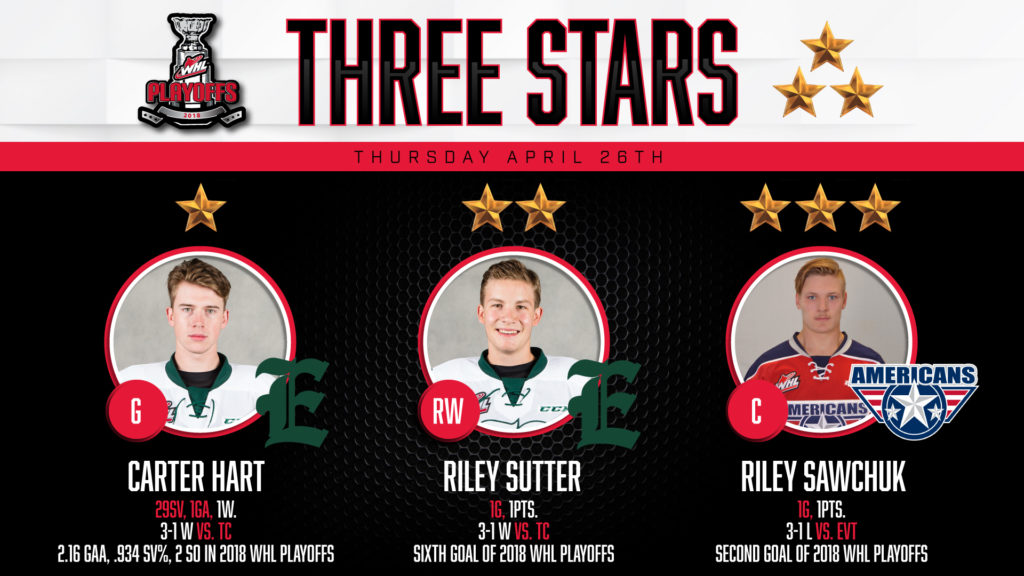 As the Everett Silvertips moved within a game of reaching the 2018 Rogers WHL Championship Series, they earned the majority of the recognition in Thursday’s edition of the Western Hockey League’s Three Stars.

Earning first star honours in the 3-1 with for the Silvertips was goaltender Carter Hart (Philadelphia Flyers), who stopped 29 of 30 shots in the 3-1 victory.  His league-leading 11th victory of the 2018 WHL Playoffs, Hart stopped all 20 shots through the first 40 minutes, then turned aside nine of 10 in the final period to close out the game. In 14 games during the 2018 WHL Playoffs, Hart has a 11-3 record with one overtime loss, 2.16 goals-against-average, .934 save percentage and two shutouts. The Sherwood Park, Alta. product has yet to be defeated in six road games.

2018 NHL Draft prospect Riley Sutter picked up second star honours for the evening, scoring the opening goal of the game. The Calgary, Alta. product now has points in back-to-back games and in seven of his last eight games. In 13 games during the 2018 WHL Playoffs, Sutter has 12 points (6G-6A) and a plus-17 rating with two game-winning goals.

Rounding out the WHL Three Stars was Prince Albert, Sask. product Riley Sawchuk, who had the lone goal for the home side in the loss. The goal was his second of the 2018 WHL Playoffs, giving him three points (2G-1A) in 12 games.