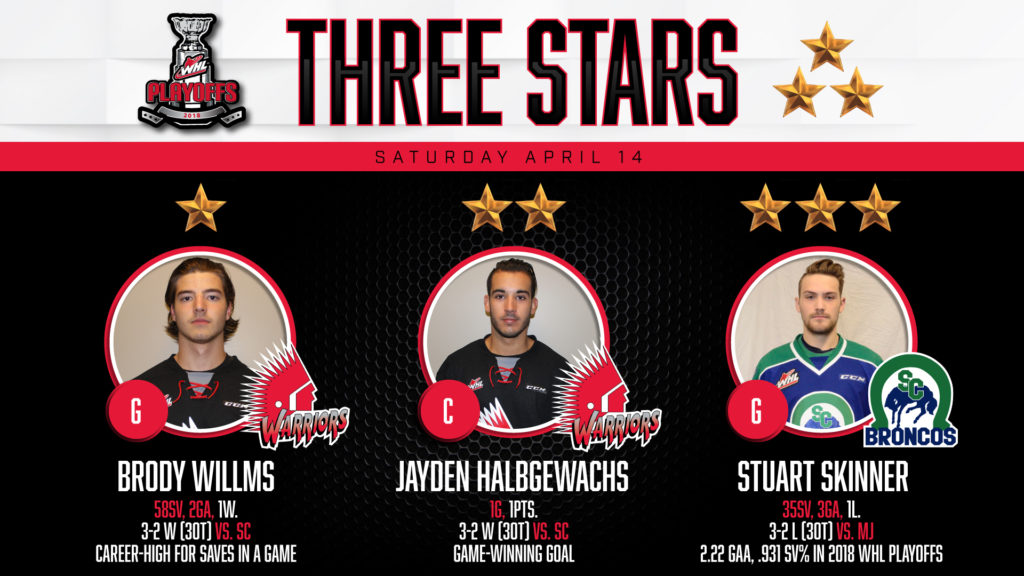 An incredible triple overtime thriller featured as the lone game on the WHL Playoffs schedule Saturday, making for easy and hard decisions in the WHL Three Stars.

Earning first star honours for the evening was Moose Jaw Warriors goaltender Brody Willms, who stopped 58 of 60 shots directed his way as the Warriors kept their season alive with a win in Game Six. The 58 saves were the first time he’s surpassed the 50-save plateau in his WHL career, whether it be a regular season or playoff game.

Earning second star honours was the overtime hero at the other end of the rink in Warriors forward Jayden Halbgewachs (San Jose Sharks). His goal snapped a four-game goalless streak by the overage forward, giving him 26 points (14G-12A) in 30 career WHL Playoff games.

Swift Current Broncos goaltender Stuart Skinner (Edmonton Oilers) rounded out the WHL Three Stars tonight, making 35 on 38 shots in the triple overtime loss. Despite the defeat, Skinner still maintained a 2.22 goals-against-average and .931 save percentage in 13 games during the 2018 WHL Playoffs.