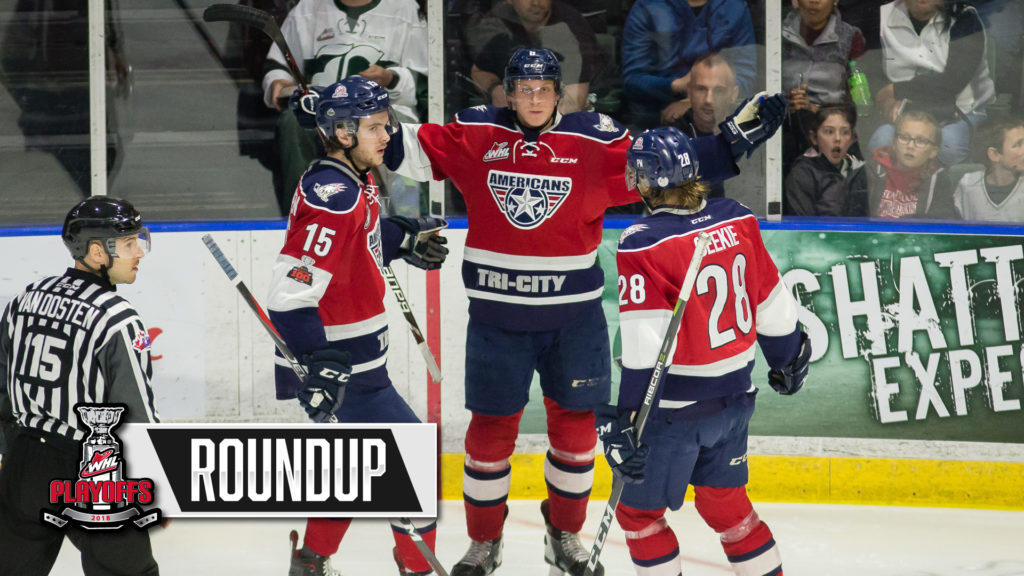 The Swift Current Broncos took care of business on home ice Saturday evening, downing the Lethbridge Hurricanes by a 4-3 score to move one win away from clinching the Eastern Conference Championship for the first time since 1993.

Giorgio Estephan led the offensive charge for the Broncos with a pair of goals and three points while Colby Sissons (New Jersey Devils) added a goal and an assist in the victory.

A scoreless first saw the goaltenders take over the beginning of the game, combining for 20 saves, 12 from Logan Flodell and eight from Stuart Skinner (Edmonton Oilers).

The scoring action began in the second as Sahvan Khaira fired in the puck from the point. While his initial shot was stopped by Flodell, Estephan and Max Patterson were on the doorstep, with the former touching the puck before the latter cleaned up the play for the opening goal of the game.

Responding back for the Hurricanes was Zane Franklin. The Marwayne, Alta. product took a cross-ice pass from Igor Merezhko on the rush up ice and beat a sprawling Skinner to even up the game late in the second.

Never one to be deterred, the Broncos would retake the lead before the end of the period. As the Broncos rushed the puck into the zone, Estephan came with them but held back, creating just enough space for Aleksi Heponiemi (Florida Panthers) to feed him the puck in the slot where he beat Flodell to make it a one-goal game after 40 minutes.

Adding to their lead in the third, the Broncos’ defence got in on the scoring as Sissons skated in from the point, stepped into a shot, and beat Flodell to give the home side a two-goal advantage. The Hurricanes would come back to cut the lead to one, with Brad Morrison tallying his 16th of the WHL Playoffs right off a face-off, keeping the atmosphere very much on-edge for both clubs.

It was a night where things went the Broncos’ way though. Tyler Steenbergen (Arizona Coyotes) poked the puck off the stick of a Hurricanes’ player as the visitors attempted to clear the puck out of the zone. He then fed it down low to a wide open Estephan, with the former Hurricanes’ captain burying the puck into the net for his second of the game and the eventual game-winner.

A late power-play goal from Egor Zudilov made things close, but the Broncos held off the attack in the final minute to claim the victory. Skinner stopped 27 of 30 in the victory. Flodell stopped 28 of 32 in the loss.

Earning recognition on the score sheet for the winning Broncos were Steenbergen, Artyom Minulin, Khaira, Heponiemi, and captain Glenn Gawdin (Calgary Flames) who earned earned a single assist in the contest.

The @SCBroncos hang on for the 4-3 win at home and will have the chance to clinch the Eastern Conference Championship Monday in Lethbridge! #SCvsLET #WHLPlayoffs pic.twitter.com/DIyvmUT818

The @SCBroncos take back the lead before the second is out! @Gestephan_9 makes it 2-1 for the home side heading to the third. #SCvsLET #WHLPlayoffs pic.twitter.com/gKUJP7Xxt5

The @WHLHurricanes tie up the game after 40 minutes thanks to @zaner19 and we've got a 1-1 game going to the third! #SCvsLET #WHLPlayoffs pic.twitter.com/qlmSPZNdrp

Take it to the Max (Patterson)! The @SCBroncos forward makes it 1-0 for the home side late in the second! #SCvsLET #WHLPlayoffs pic.twitter.com/aAiTtuLQMX

Don’t count out the Tri-City Americans just yet.

A big 5-2 victory on the road Saturday earned them at least one more game in the Western Conference Championship and a chance to push the series to a seventh and deciding game next week.

Defenceman Juuso Valimaki (Calgary Flames) came up big with a pair of goals while the pair of Roman Kalinichenko and Riley Sawchuk each had a pair of assists in the victory. Patrick Dea delivered a spectacular 35-save performance to add to the winning effort.

It wasn’t a pretty start for the visitors though, with the Silvertips busting in off the opening face-off and scoring seven seconds into the game off 2018 NHL Draft prospect Connor Dewar’s seventh of the post-season. The goal tied a 30-year-old WHL Playoffs record set initially by former Medicine Hat Tigers forward Trevor Linden. Fortunately for the Americans, they didn’t let it set the tone for the rest of the game.

The Americans would find their offensive legs in the second period. A beautiful bank pass from Kalinichenko found its way to spring Valimaki on an odd-man rush, where he streaked down the wing and beat Carter Hart (Philadelphia Flyers) to tie the game up just 2:29 into the middle period.

Ten minutes later, the Americans were back on the offensive. Jordon Topping separated the Silvertips defender from the puck behind Everett’s net with a nice hit, then threw the puck out front, where it deflected off Nolan Yaremko and past Hart to give the Americans a 2-1 advantage.

Things would remain that way until the third, when Valimaki took charge for his second goal of the night. Sawchuk sprung Valimaki through a hole in the Silvertips defence, allowing him to drive to the net largely unopposed before he back-handed it past Hart for the two-goal advantage.

A turnover in the Silvertips zone led to the Americans’ fourth goal of the evening as AuCoin made the Silvertips pay with his fourth of the post-season.

Dewar scored his second of the game to cut the lead back to two late, but Americans’ captain Michael Rasmussen (Detroit Red Wings) potted an empty-net goal to further secure the game.

Dea’s aforementioned 35-save performance featured six saves in the first, 19 in the second, and 10 in the third. Hart stopped 19 of 23 in the loss.

Yaremko added an assist to his goal for the multi-point performance while Topping, Geekie each added a single assist in the win.

We will see you in Kennewick on Monday! The @TCAmericans force Game Six with a 5-2 victory against the Silvertips tonight! #EVTvsTC #WHLPlayoffs pic.twitter.com/MvPKn203M3