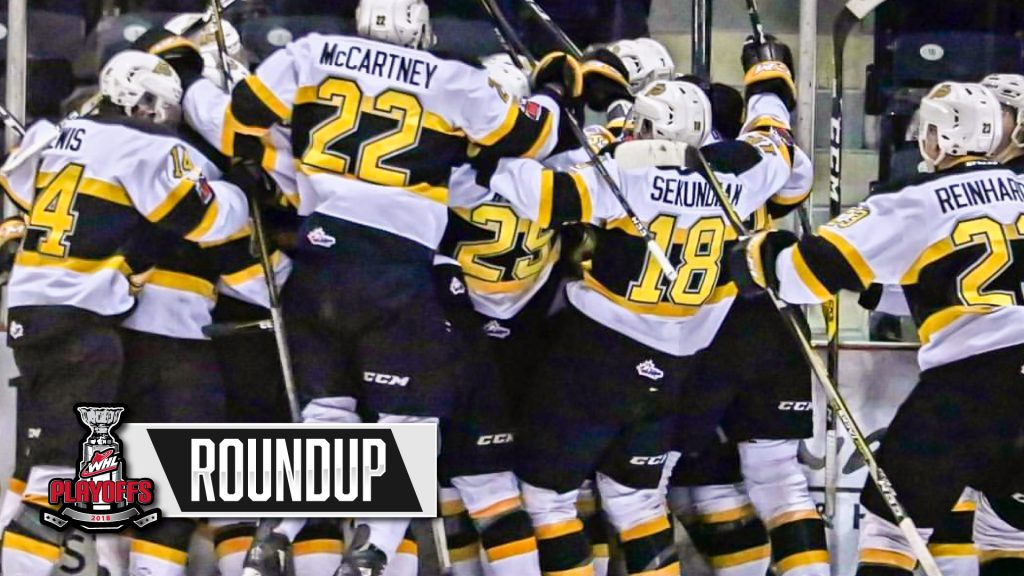 The Brandon Wheat Kings are off to the second round of the 2018 WHL Playoffs following a 4-3 overtime victory against the Medicine Hat Tigers Sunday in Dauphin, Man.

Linden McCorrister played the role of hero for the Wheat Kings, tallying the game-tying goal in the third and then striking 10:37 into the first overtime to deliver the series victory.

To get to Game Six had seemed like an incredible feat in itself when the Wheat Kings returned home down 2-0 in the series last week. Nevertheless, they prevailed, winning Games Three and Four in Dauphin, Man., becoming the first road team to win in the series on Friday night in Game Five and then overcoming a hat trick from Tigers captain Mark Rassell in Game Six.

Rassell had the only goal of the first period and struck 10:10 into the second to build up a 2-0 lead for the visitors. The Wheat Kings chipped away at that lead though, with goals coming from Stelio Mattheos (Carolina Hurricanes) and Evan Weinger before the end of the middle period to even the game up heading to the third.

A must-win game for the Tigers, Rassell tallied his eighth goal of the series in the third to put the Tigers back out in front, but McCorrister and the Wheat Kings had other plans. With 8:09 left in the contest, Weinger fed the puck out front to McCorrister, who was ready at the side of the net to beat Jordan Hollett (Ottawa Senators) to even up the score.

Then in overtime, Braden Schneider sent the puck into the slot, where McCorrister was ready with the quick tip, beating Hollett to secure the series victory.

Hollett stopped 42 of 46 shots in the loss. Connor Gutenberg and David Quenneville (New York Islanders) each finished with a pair of assists in the game for their respective sides.

Rassell finished as the leading scorer for the Tigers and from both teams in the first round series with 13 points (8G-5A) in the six games. Both Ty Lewis (Colorado Avalanche) and McCorrister finished tied for the team lead on the Wheat Kings with eight points each, with both tallying four goals and four assists.

The Wheat Kings will now advance to face the Lethbridge Hurricanes in the second round of the playoffs.

We've got a game heading to the third! Evan Weinger converts on a two-on-one for the @bdnwheatkings to make it 2-2 after 40! #MHvsBDN #WHLPlayoffs pic.twitter.com/Yswha0YMXn

The Prince Albert Raiders will live to play another day.

2018 NHL Draft prospect Cole Fonstad had his second goal of the game stand up as the game-winner Sunday as the Raiders tallied a 5-4 victory over the Scotty Munro Memorial Trophy Champions to extend their first round series to a seventh game.

The home side opened the scoring in the first as Fonstad drove to the front of the net and wound up in the perfect spot for the rebound as Jordy Stallard (Winnipeg Jets) puck the original puck on net.

Brayden Burke (Arizona Coyotes) responded near the end of the opening period for the Warriors as Jayden Halbgewachs (San Jose Sharks) fed him the puck down low and he waltzed unopposed into the slot area, beating Ian Scott (Toronto Maple Leafs) to make it a 1-1 game after 20 minutes.

Raiders captain Curtis Miske converted on another rebound in front of the net 12:09 into the second period to make it a 2-1 game, but the Warriors responded with their two of their top offensive threats as goals from Burke and Halbgewachs came 119 seconds apart near the end of the second to vault the Warriors into the lead.

That lead would be short-lived through as just 44 seconds after Halbgewachs’ 3-2 goals, Sean Montgomery buried his fourth of the series to tie up the game 3-3 heading to the third.

The wild display of scoring continued into the third as Regan Nagy converted on the power play just 74 seconds into the third to make it a 4-3 contest. The Warriors would of course have a response though as their captain got in on the scoring action, with Brett Howden (New York Rangers) tallying his fourth of the series to once again make it a tie game.

But lo and behold, the Raiders had the last laugh in the contest. Fonstad redirected the shot from Stallard once again with 8:26 to go in the contest, proving to be the deciding goal.

Burke finished with a pair of goals and four points in the game. Halbgewachs added a goal and an assist. Defenceman Kale Clague (Los Angeles Kings) added a pair of assists in the loss.