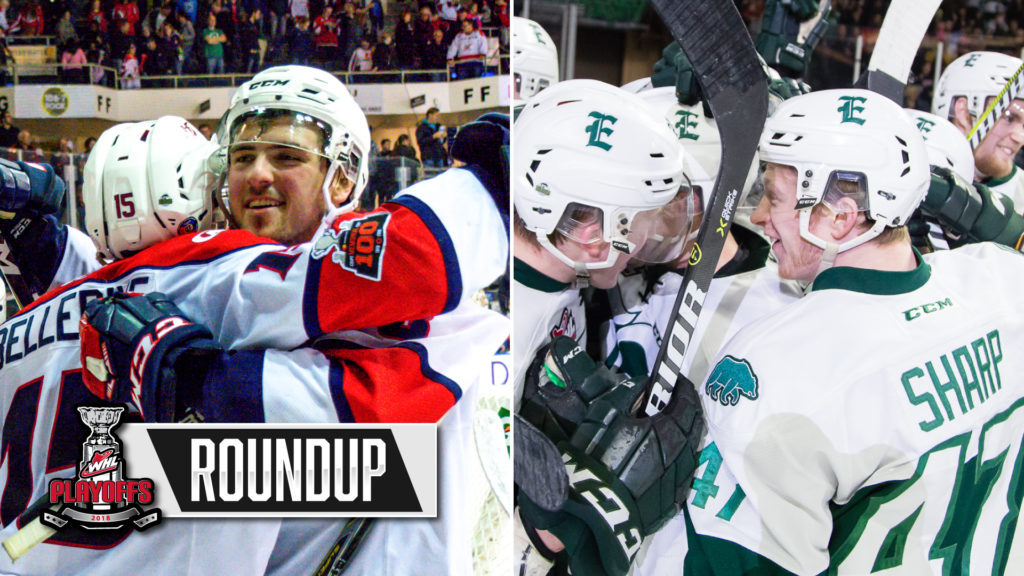 The Swift Current Broncos are coming home with a 3-2 series lead and a chance to advance to the Eastern Conference Championship in front of their home crowd Saturday.

Stuart Skinner (Edmonton Oilers) put forth his third shutout of the 2018 WHL Playoffs, stopping all 36 shots directed his way, with 14 stops in the first, 10 in the second, and 12 in the third as the Broncos downed the Moose Jaw Warriors by a 2-0 score at Mosaic Place Friday.

Goals for the Broncos came from Kaden Elder and Giorgio Estephan, the third of the post-season for both players as they provided the offensive side of Friday’s victory.

Elder put the Broncos ahead early, deflecting a shot from defenceman Josh Anderson (Colorado Avalanche) past Brody Willms just 3:53 into the contest.

Down a goal early in their own building, the Warriors did their best to press the attack the other way, requiring Skinner to be at his best for the rest of the game.

While the Warriors would come close on several occasions, Skinner was there to turn them aside. The Broncos would also eventually double their lead midway through the third period as Estephan took a beautiful pass from Tyler Steenbergen (Arizona Coyotes) for the insurance goal, which would prove beneficial as they ground down the final minutes on the clock.

To his benefit, Willms made several outstanding saves, keeping the Warriors in contention throughout the game. He finished with 22 saves in the contest.

Brayden Burke (Arizona Coyotes) led the Warriors with six shots in the contest. Sahvan Khaira, Steenbergen, Anderson, and Artyom Minulin each picked up a single assist in the victory.

The Lethbridge Hurricanes are off to the Eastern Conference Championship for a second straight year following a 3-0 victory over the Brandon Wheat Kings Friday on home ice.

In fact, Friday’s victory was a classic example of what had gotten the Hurricanes so far in the 2018 WHL Playoffs as Logan Flodell was rock solid with a 32-save shutout and Brad Morrison led the way offensively with a pair of goals to secure the victory.

Morrison opened the scoring 10:09 into the first as captain Jordy Bellerive (Pittsburgh Penguins) sprung the WHL’s leading scorer in the playoffs on a short-handed breakaway that he made no mistake on.

In the second, rookie Logan Barlage doubled the Hurricanes’ lead. Wheat Kings’ goaltender Dylan Myskiw stopped the initial shot from the points by defenceman Tate Olson, but Barlage got his stick free in the slot to bang home the rebound past Myskiw 10:53 into the middle period.

Flodell continued to stifle the Wheat Kings in the third and Morrison finished off the game with the empty-net goal. In the first, he made 11 saves, followed by 12 in the second and nine more in the third. Connor Gutenberg led the Wheat Kings with four shots in the game.

Bellerive, Olson, Ty Prefontaine, and Jake Elmer all picked up assists in the victory. Myskiw finished with 27 saves on 29 shots in the final game of the series.

The Hurricanes will now await the winner of the Round Two series between the Moose Jaw Warriors and Swift Current Broncos.

The pass from @jordybellerive ✔️
The finish from @Bmorry_90 ✔️

For the third time in franchise history, the Everett Silvertips are headed to the Western Conference Championship.

Friday, they accomplished it in the most Everett way possible as their goaltenders were an impenetrable force and the offence clicked to the tune of four methodical goals from outside of their top offensive stars that won them the contest over the Portland Winterhawks.

A scoreless first period kept both teams on their heels, ready for anything, but it was the Silvertips who would strike midway through the second for the game-winning goal. Christiansen’s shot found its way through traffic in front of Winterhawks’ goaltender Cole Kehler (Los Angeles Kings) for the first goal of the series-deciding contest.

Just 2:49 into the third, with the Silvertips still ahead by just a goal, Sutter doubled his team’s lead, deflecting a point shot from defenceman Ondrej Vala (Dallas Stars). Just minutes later, a defensive lapse by the Winterhawks allowed Gianni Fairbrother time to retrieve the puck from behind the net and beat Kehler in close for the 3-0 goal. Christiansen would add an empty-net goal to round out the victory.

Kehler stopped 39 of 42 in the loss. Kieffer Bellows (New York Islanders) led the Winterhawks with seven shots in the contest.

The Silvertips will now advance to face the Tri-City Americans in the Western Conference Championship.

It's not a great day to be a Silvertip. It's a FANTASTIC day to be the @WHLsilvertips. #EVTvsPOR #WHLPlayoffs pic.twitter.com/WeKndBPYYT