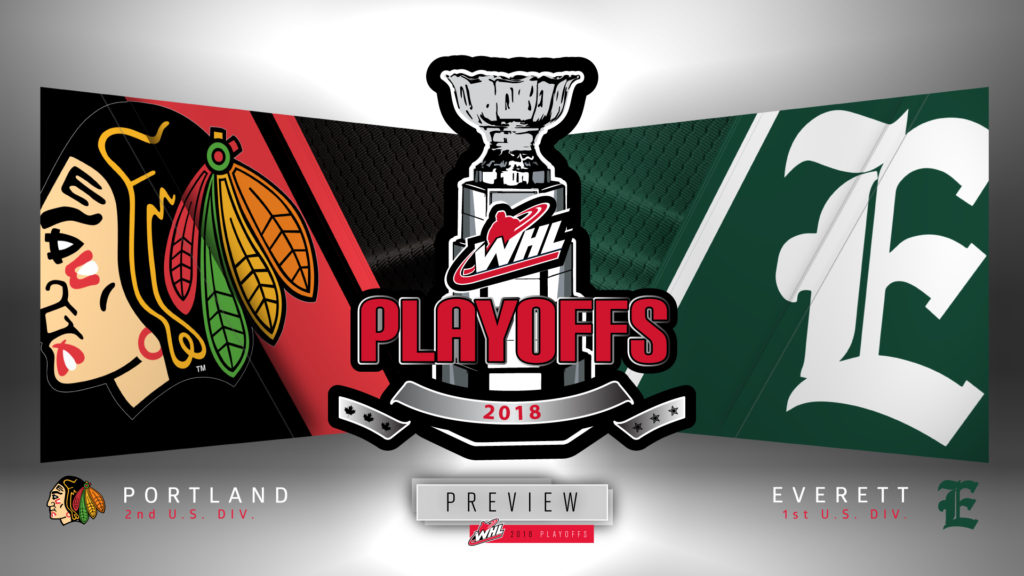 With the second round of the 2018 WHL Playoffs set to begin Friday, April 6, WHL.ca provides a look in at each of the four head-to-head matchups across the league.

With a general introduction, vital statistics and keys to the series, we’ve got everything you need to know heading into the 2018 WHL Playoffs. While the usual suspects are known, our ‘Players to Watch’ section will take a deeper dive into some of the supporting characters set to take on a big role in the post-season.

Finally, we close each of our series previews with a quick look to the past for a brief historical take on the rivalry that exists – or stands to ignite.

In our first of four Round Two previews, we’ll examine an all-U.S. Division battle between the top two teams from the Western Conference in the 2017-18 WHL Regular Season as the Everett Silvertips and Portland Winterhawks prepare for a fierce series.

Entering Round Two of the 2018 WHL Playoffs, three teams from the competitive U.S. Division remain in the hunt for the Ed Chynoweth Cup. Two of those teams will meet in Round Two as the impending series between U.S. Division Champion Everett Silvertips and Seattle Thunderbirds has all the makings of an epic clash.

The top two teams from the Western Conference in the regular season have a lengthy recent playoff history. The core of both team’s leadership groups were fresh faces in the league during the last post-season meeting in 2016, on their way to getting recognized by NHL teams and taking the WHL by storm.

Guided by Carter Hart (Philadelphia Flyers) and a forward core brimming with offensive talent, the Silvertips will face-off against a Winterhawks, a team with a strong defensive core, momentum from the regular season series and several offensive pieces of their own up front to contend with the Silvertips. 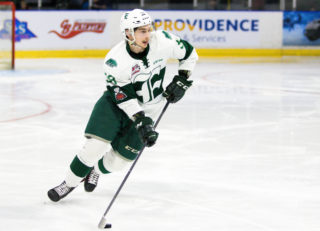 Key to the Series – Everett Silvertips

One rivalry down, one to go: If it wasn’t the Seattle Thunderbirds thwarting the post-season plans of the Everett Silvertips in recent years, the Portland Winterhawks were more than happy to oblige. If the first round proved anything though, the Silvertips were able to move past those tough defeats of years past and focus on the task at hand.

They’ll be challenged to do more of the same against a team with more offensive options, a stronger defence and top-tier goaltender in the Winterhawks. How they tackle this challenge over the next two weeks will be worth watching.

Key to the Series – Portland Winterhawks

The regular season does matter: In the 21 regular season series between the Everett Silvertips and the rest of the league, only one team managed to take more points from the season series: the Portland Winterhawks. While the Winterhawks have the knowledge of three meetings in December where the Silvertips humbled them by 4-1, 2-1, and 8-3 scores, they also have the momentum of a pair of shutout victories and in the two most recent meetings where Cole Kehler (Los Angeles Kings) stopped all 49 shots combined.

Whatever was working for the Winterhawks in those two games will be squarely on their mind, as will the team’s 4-3 shootout victory on Jan. 6 in Everett. Accounting for three of Everett’s eight regulation losses at home this season, there’s hope for the Winterhawks at home and on the road, where they’ll need to win at least once in order to be victorious in the series.

RW Patrick Bajkov (4-3-7): The bold prediction of Garrett Pilon (Washington Capitals) being the “Forward to Watch” during Round One paid off as he finished tied for the lead in goals among the Silvertips. Now seems like a good time to feature the other forward that matched his goal production: Patrick Bajkov (Florida Panthers).

Fresh off signing his first professional hockey contract late in the regular season, Bajkov had a pair of power-play goals, one short-handed goal and one game-winning goal as part of his four-goal performance in five games. He finished first overall in team scoring during the season series against the Winterhawks with 12 points (5G-7A), finishing two goals behind goal leader Matt Fonteyne. If Bajkov can stay hot, it’ll be bad news for the Winterhawks.

LW Kieffer Bellows (2-7-9): In the regular season, the Winterhawks benefited from a 41-goal performance by Kieffer Bellows (New York Islanders). In round one of the 2018 WHL Playoffs, he delivered for the team again as his second goal of the series stood up as the game-winning goal in the series-deciding Game Seven.

It’s never a bad thing to develop an early penchant for scoring goals in big games and the Winterhawks are about to face a series full of them. What the Edina, Minn. product has in store for an encore will go a long way in determining the Winterhawks’ fortunes and status in the post-season. Bellows has also brought his best to the regular season series, tallying seven goals in eight games. That’s tied for the goal scoring lead from the season series alongside Skyler McKenzie (Winnipeg Jets) and Silvertips’ captain Matt Fonteyne.

D Wyatte Wylie (0-2-2): The hometown product tallied the first points of his WHL Playoffs career against the Seattle Thunderbirds and will be on the hunt for more success in Round Two. A 2018 NHL Draft Prospect, the 1999-born Wylie was part of a Silvertips defensive core that allowed 10 goals over the five-game series, the fewest allowed by any WHL club in Round One.

The Silvertips are a team that haven’t had to depend heavily on offensive production from their blue line in order to succeed and this upcoming round shouldn’t be any different. That shouldn’t stop Wylie from contributing when he sees fits, but with an ever-dangerous Winterhawks team lurking to take down the Silvertips, he will be one of the Everett defencemen looking to rise to the occasion while protecting their own net.

D Dennis Cholowski (4-2-6): Should the question “Which skater the most goals in the 2018 WHL Playoffs Round One series between the Portland Winterhawks and Spokane Chiefs?” ever pop up in a trivia contest, Dennis Cholowski (Detroit Red Wings) would be more than happy to tell you the answer. That’s because he’s it.

Cholowski was the beneficiary of some nice passes from his teammates, but still proved himself more than capable of answering the call for the Winterhawks from the blue line. He had one goal in 32 regular season contests with the Winterhawks, but more than made up for it in the first round against the Chiefs. How he performs in these next four to seven games will weigh greatly on Portland’s success going forward.

Carter Hart (5 GP, 4-0-1-0, 1.97 GAA, .938 SV%, 1 SO): For not playing in any games since Saturday, Hart has already had a productive week, earning the WHL Goaltender of the Week, the Vaughn CHL Goaltender of the Week, and Vaughn WHL Goaltender of the Month honours in the span of two days. Hart leads the league in goals-against-average, save percentage and is tied for first in both wins and shutouts. His 1.83 GAA and .948 SV% in six games against the Winterhawks during the regular season will provide plenty of hope to Silvertips fans hopeful of reaching Round Three.

Named the 2017 Western Conference Player of the Year and Goaltender of the Year, Hart is capable of taking over a game and series. Can he do that against an offensively-talented Winterhawks’ team?

Cole Kehler (7 GP, 4-1-2-0, 3.07 GAA, .907 SV%): Given the accolades and honours bestowed upon Hart, it’s easy to immediately think of him as the better goaltender, but Cole Kehler (Los Angeles Kings) presents a strong case for raising his game against the back-to-back Del Wilson Memorial Trophy winner. Of the 10 games in the season series, Kehler and Hart went head-to-head in six of them, with Kehler sporting a 3-2-0-1 record. That record also includes shutouts in the last two meetings and a shootout loss in the meeting before that.

For all the offensive talent and blueline depth possessed by the Winterhawks, Kehler may turn out to be the team’s biggest asset in the series.

When the two teams kick off their series Friday, it will mark the fifth time in eight seasons that the two clubs have met in WHL playoffs. The Everett Silvertips have emerged victorious from two of the five all-time playoff meetings and will be looking to even up the score this time around.

Since the two clubs met in the 2015-16 WHL Playoffs, it feel like a lifetime ago, but several players are still present on today’s roster, including Matt Fonteyne and Kevin Davis, who tallied five and four points respectively for the Silvertips in the four-game series. Silvertips’ regulars Patrick Bajkov (Florida Panthers), Connor Dewar, and Jake Christiansen represented the future then, but are very much part of the team’s leadership group now. Also, Carter Hart (Philadelphia Flyers) didn’t play in the majority of the series, but did stop 28 of 30 shots in Portland to win Game Four.

Staring down the Silvertips is an ominous stat of three straight exits in Round Two of the WHL Playoffs, a trend they’ll look to break and advance to their first Conference Final since the 2005-06 season.

Much can be said about the Winterhawks team that got swept the last time they met the Silvertips in the WHL playoffs. Current captain Keoni Texeira, forward Cody Glass (Vegas Golden Knights), Skyler McKenzie (Winnipeg Jets), Ryan Hughes, Conor MacEachern, Brendan De Jong (Carolina Hurricanes) and Alex Overhardt were part of that team that got blanked thanks to a defensive clinic from the Silvertips. Those seven players accounted for just six points (2G-4A) in the series, but time has made the Winterhawks wise and they’ll put forth a much stronger effort offensively this time around when you factor in the likes of Kieffer Bellows (New York Islanders) and Joachim Blichfeld (San Jose Sharks) to Portland’s lineup.

The Winterhawks’ last trip to the Conference Finals came in the 2014-15 season when they also took down the Silvertips during their run. Some good news for the Winterhawks is that in two of the three times they’ve beaten the Silvertips in the post-season, they’ve gone on to win the Western Conference both times, also capturing one of their five Ed Chynoweth Cups.