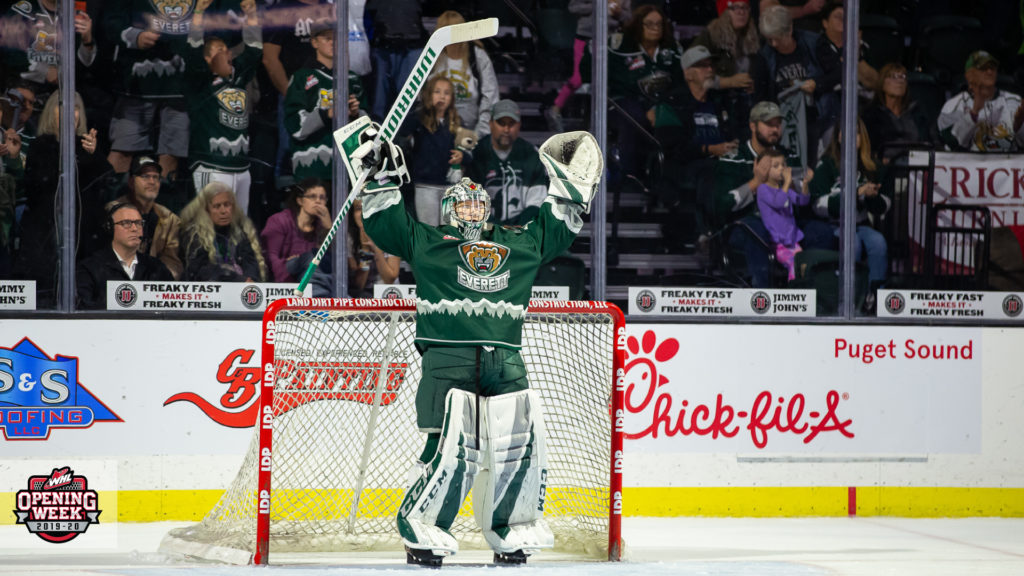 With all 22 Western Hockey League teams competing on Saturday, the 2019-20 WHL Regular Season is fully underway. The Swift Current Broncos and Kelowna Rockets each pulled off dramatic wins in overtime while the Prince Albert Raiders, Brandon Wheat Kings, Moose Jaw Warriors, and Lethbridge Hurricanes all struck back in the second half of home-and-home matchups. In the U.S. Division, the Everett Silvertips and Portland Winterhawks used offensive showcases to earn their victories. Around the rest of the league, the Edmonton Oil Kings, Vancouver Giants, and Seattle Thunderbirds also found their way into the win column. 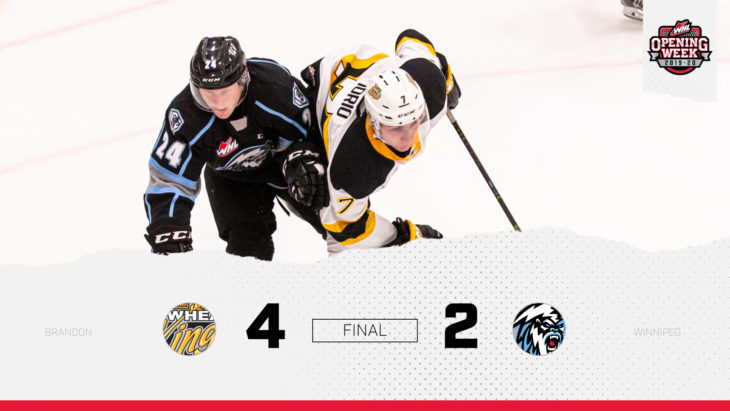 After losing to the ICE the previous night at home, the Wheat Kings fought back in the Battle of Manitoba with a 4-2 score against Winnipeg. Colorado Avalanche prospect Luka Burzan notched two goals with Ben McCartney also earning two points (1G-1A) and Lynden McCallum collecting the insurance goal for the Wheat Kings. On the other side of the scoresheet, Chicago Blackhawks prospect Michal Teply and newly acquired forward Brad Ginnell scored Winnipeg’s two goals of the night. In net, Vegas Golden Knights prospect Jiri Patera stopped 33 of 35 shots for Brandon. 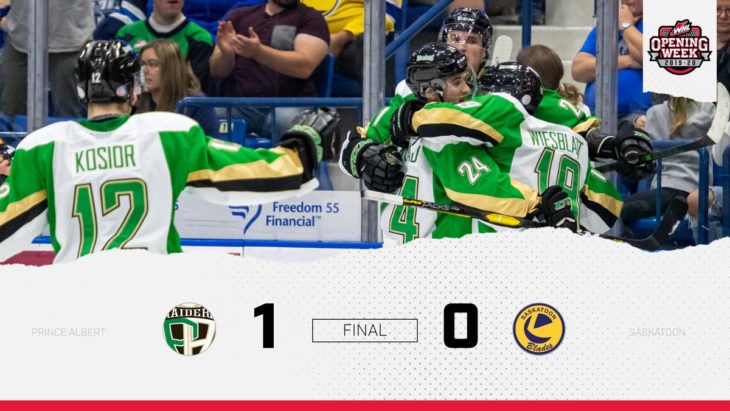 After a close 3-2 final on Friday, the Raiders and Blades kept an even tighter game on Saturday. Going scoreless throughout the first, second and half-way through the third period, the two teams were at a draw. Breaking the score was Montreal Canadiens prospect Cole Fonstad who ripped a shot top-shelf for Prince Albert after receiving a spin-o-rama pass from Washington Capitals prospect Aliaksei Protas. The Raiders were able to hold onto their lead with help from Boston Bilous who recorded the first shutout of the 2019-20 WHL Regular Season after stopping all 26 shots that came his way. 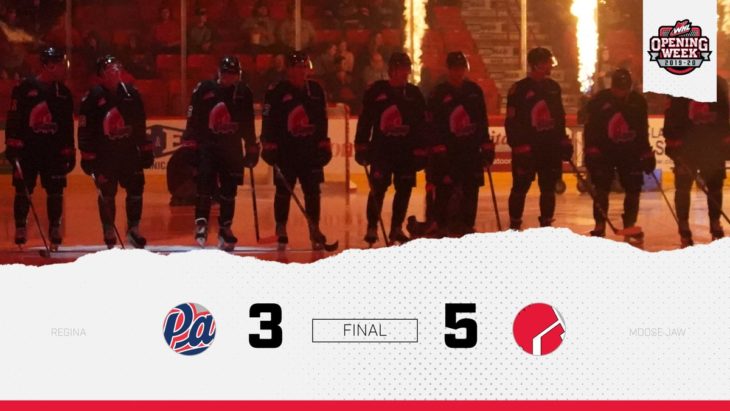 A strong performance from the Warriors had them leading 4-0 after the second period thanks to efforts by Carson Denomie, Ryder Korczak, Tate Popple and Keenan Taphorn. Heading into the third period, the Pats kicked it up a notch. Rookie Sloan Stanick recorded his first career WHL goal with Riley Krane and Robbie Holmes also adding points to the board, but time would catch up with the Pats, who ultimately fell to the Warriors 5-3 after Denomie sealed the win with an empty-net goal. Goaltender Bailey Brkin received first-star honours after stopping 43 of 46 shots against the Pats. 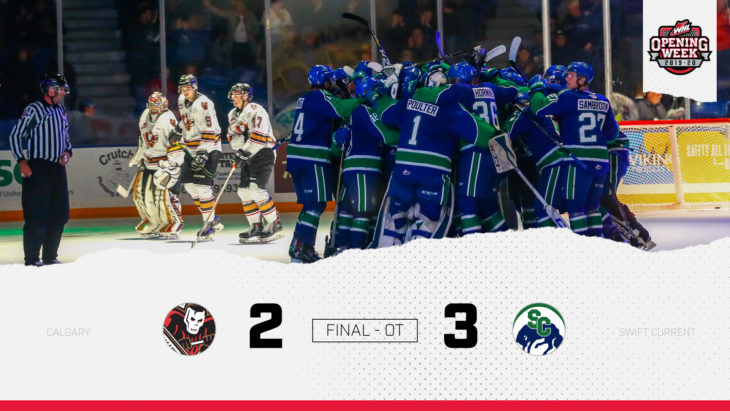 In a riveting 3-2 overtime win, the Broncos made their mark on the Central Division against the Hitmen. Carter Chorney opened the game for Swift Current with Ethan Regnier also adding a penalty shot goal to their tally. For Calgary, Vancouver Canucks prospect Carson Focht and Philadelphia Flyers signee Egor Zamula tied the game. In overtime, it was Finnish import Joona Kiviniemi who was the hero for the Broncos, recording his first goal of the season. Netminder Isaac Poulter stopped 34 of 36 shots for the Broncos’ win. 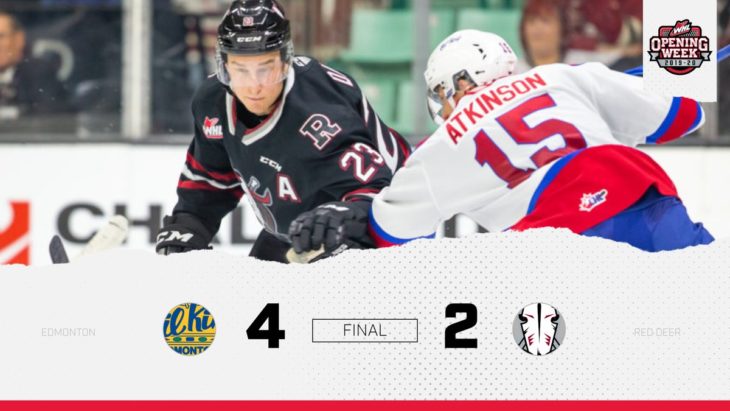 Oil Kings’ captain Scott Atkinson led his team to a 4-2 win against the Rebels after recording two goals. Josh Williams, a prospect of the 2020 NHL Draft, also collected two points (1G-1A) during the game with the final Oil Kings marker coming from David Kope. For the Rebels, Dallon Melin and Brett Davis were able to put up two points on the scoreboard. Taking home the road win for Edmonton, Dylan Myskiw stopped 27 of 29 shots. 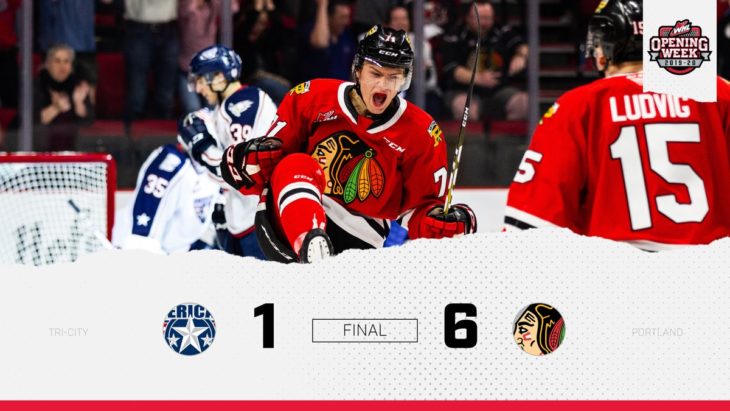 In an incredibly strong showing by the Winterhawks with Cross Hanas, Simon Knak, Johnny Ludvig, 2020 NHL Draft prospect Seth Jarvis, import Jonas Brøndberg and Clay Hanus each recording multi-point nights, Portland downed Tri-City 6-1. Prior to the end of the third, it was Jan Cikhart who put the Americans on the board before the end of the game. St. Louis Blues signed goaltender Joel Hofer stopped 17 of 18 shots to add to Portland’s success. 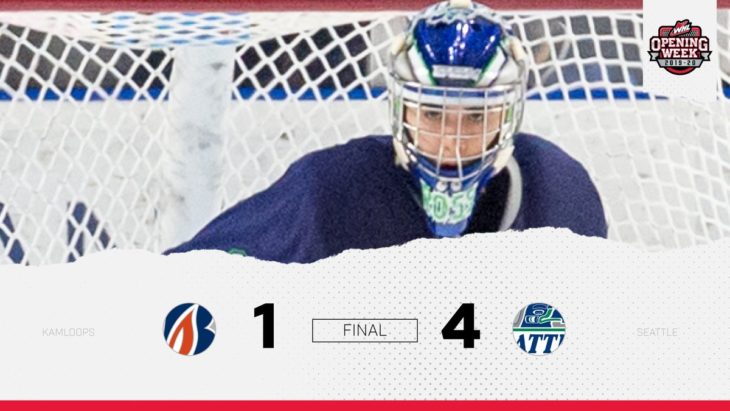 Philadelphia Flyers prospect Roddy Ross stopped 50 of 51 shots as the Seattle Thunderbirds soared to a 4-1 victory in their home opener Saturday against the Kamloops Blazers. Ross stopped all 28 shots through 40 minutes, then stopped 22 of 23 in the final 20 minutes. Andrej Kukuca posted a goal and an assist for the Thunderbirds while Jared Davidson, Alex Morozoff, and Payton Mount also scored. Blazers captain Zane Franklin had the lone goal for Kamloops. 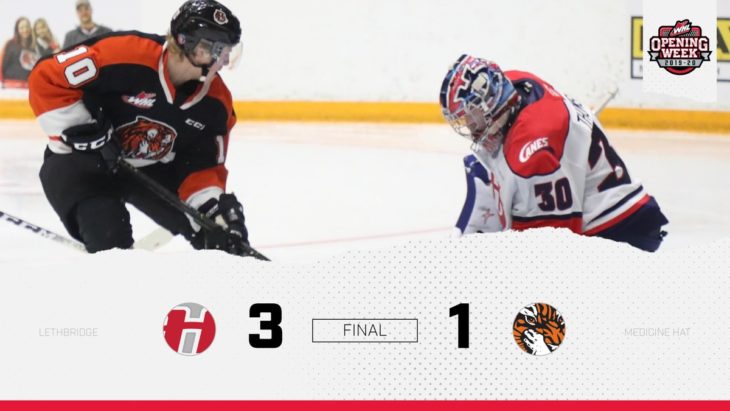 The Lethbridge Hurricanes handed the Medicine Hat Tigers a 3-1 defeat Saturday in The Gas City. Oliver Okuliar, Noah Boyko, and Alex Cotton had the goals for the Hurricanes while Ryan Chyzowksi had the lone goal for the Tigers. Bryan Thompson stopped 32 of 33 shots for his first win of the season. Ottawa Senators prospect Mads Søgaard stopped 23 of 25 shots in the narrow loss. 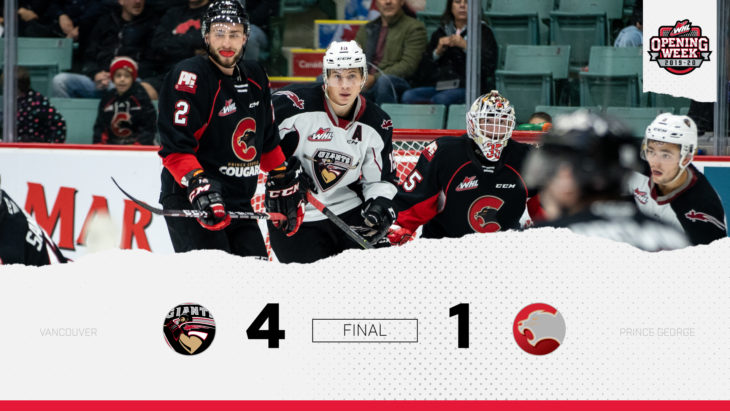 The Vancouver Giants completed a two-game sweep of the Prince George Cougars in northern British Columbia Saturday, winning 4-1. Jackson Shepard had two goals and three points while Seth Bafaro and 2020 NHL draft prospect Justin Sourdif each had a goal and two assists. Arizona Coyotes prospect David Tendeck stopped 26 of 27 shots for the win. Mitchell Kohner had the lone goal for the Cougars. 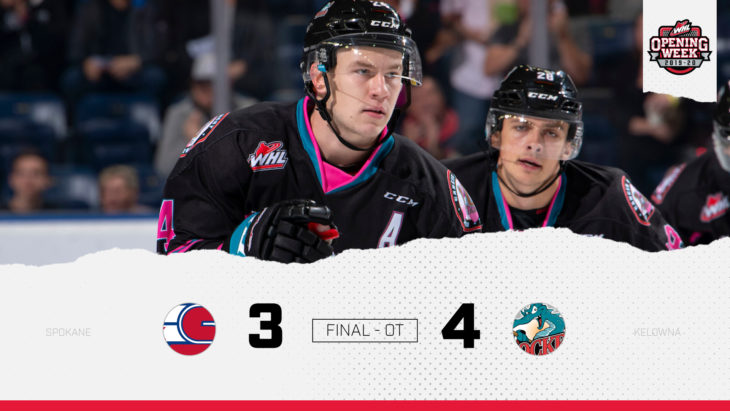 San Jose Sharks prospect Dillon Hamaliuk scored with less than one second left in overtime Saturday, giving the Kelowna Rockets a 4-3 overtime win over the Spokane Chiefs. The goal was Hamaliuk’s second of the night and his fourth point of the game. Kyle Topping added a goal and three points while Vegas Golden Knights prospect Kaedan Korczak had the other goal for the Rockets. Sharks prospect Jake McGrew, Toronto Maple Leafs prospect Filip Kral, and Michael King scored for the Chiefs. 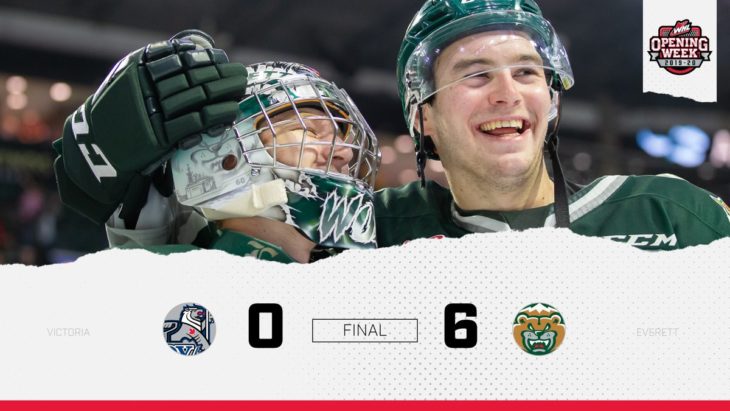 Calgary Flames prospect Dustin Wolf moved into a tie for third place in Everett Silvertips goaltending history with the 13th shutout of his WHL career in a 6-0 win over the Victoria Royals Saturday. Captain Bryce Kindopp had a pair of goals as part of a four-point night while Gage Goncalves had four assists in the offensive showcase. Philadelphia Flyers prospect Wyatte Wylie also scored twice while Max Patterson and Justyn Gurney each scored once.