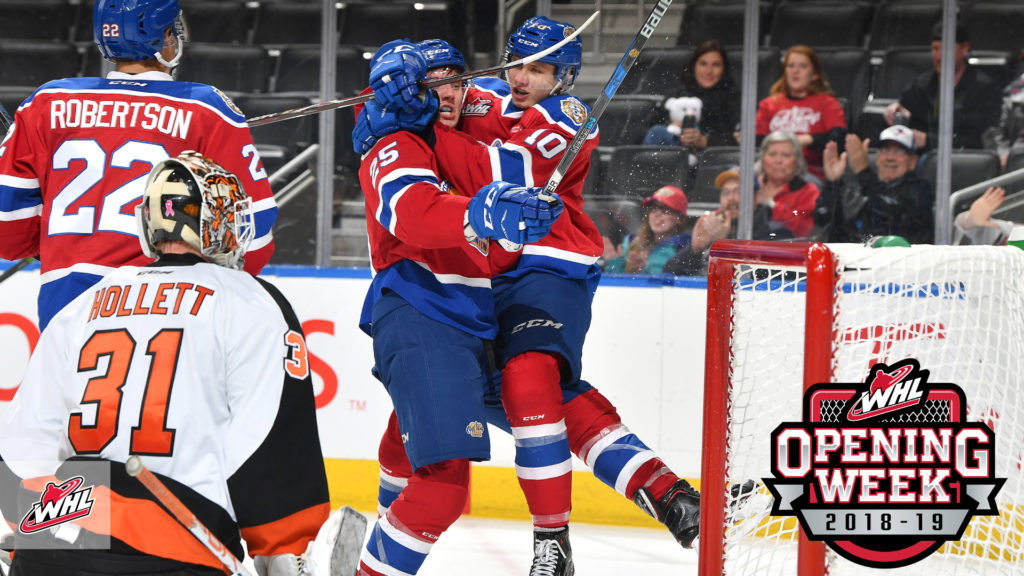 1. Brett Kemp, Edmonton Oil Kings: The veteran product of Yorkton, Sask. continued his hot start to the season, registering two goals to boost the Oil Kings to a 3-2 victory over the Medicine Hat Tigers Wednesday evening.

With the two-goal performance, Kemp has now collected three goals in as many games, helping the Oil Kings jump out to a 3-0-0-0 start to begin the 2018-19 WHL season.

Selected by the Everett Silvertips in the second round (41st) of the 2015 WHL Bantam Draft, Kemp has notched 53 points (24G-29A) in 110 career WHL regular season games.

2. Vladislav Mikhalchuk, Prince George Cougars: The 18-year-old product of Minsk, Belarus registered his first multipoint effort of 2018-19, notching a goal and an assist as the Cougars claimed their first win of the 2018-19 season with a 4-2 win over the Kelowna Rockets on Wednesday. With the two-point night, the 6-foot-2 right winger now has three points in three games as he looks to improve upon his 2017-18 rookie season in which he managed 33 points (14G-19A) in 60 contests.

3. Taylor Gauthier, Prince George Cougars: The sophomore puck stopper from Calgary came up big, making 27 saves on 29 shots as Prince George slammed the door on a six-game losing skid at Prospera Place with an exciting 4-2 win over the Kelowna Rockets. The last time the Cougars won in Kelowna came back in November 2016. The victory served as the first of 2018-19 for Prince George, as the Cougars improved to 1-1-0-1 on the season. Gauthier has appeared in all of those contests, earning himself a 2.59 goals-against average and .917 save percentage along the way. 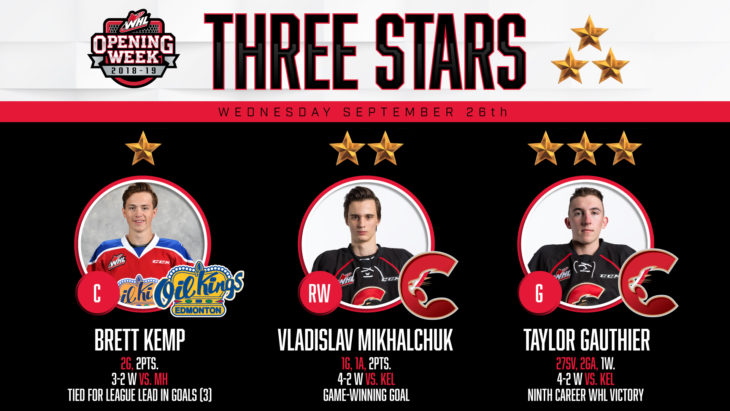 Rivalries in the Central and B.C. Division were on display Wednesday night as a pair of games occupied Wednesday’s scheduled contests as WHL Opening Week continued.

The first game of the night saw the Oil Kings score three unanswered goals to erase a 2-0 deficit against the Tigers and claim sole possession of first place in the WHL with a perfect 3-0-0-0 record.

Bryan Lockner’s second of the season stood up after video review and counted as the only goal of the first period to give the Tigers a 1-0 advantage through 20 minutes. Pressing 6:43 into the second period, defenceman Eric Van Impe put a shot on net from the point that found its way through traffic untouched for his first career WHL goal. Facing the deficit, Brett Kemp struck twice for the Oil Kings in 122 seconds, keeping things tied after 40 minutes.

With renewed life on the scoreboard, the Oil Kings struck for the winner in the third as Andrei Pavlenko finished off a scramble at the side of the net for his first of the season 10:15 into the final period.

Dylan Myskiw continued his winning ways against the Tigers from the 2018 WHL Playoffs, stopping 33 of 35 shots for the win. Jordan Hollett (Ottawa Senators) took the loss, stopping 30 of 33 shots.

A battle between the two winless teams in the B.C. Division resulted in the Prince George Cougars claiming their first victory of the season and ending a six-game losing streak at Prospera Place dating back to February 18, 2017.

The back-and-forth affair saw Ryan Schoettler and Vladislav Mikhalchuk tally a goal and an assist each, with Mikhalchuk’s goal standing up as the game winner in the contest, dropping the Rockets to 0-3-0-0 on the season.

Lassi Thomson’s first career WHL tied up the game in the second after Schoettler had the only goal of the first, but the Cougars turned on the jets in the third with goals from Mike MacLean, Mikhalchuk, and and empty-net goal from Ilijah Colina.

2019 NHL Draft prospect Taylor Gauthier stopped 27 of 29 shots in the game, earning the Second Star of the night in the WHL. James Porter stopped 20 of 23 in the loss.

Ethan Browne added a pair of assists for the Cougars while Joel Lakusta, Jackson Leppard, and Jack Sander picked up helpers. Kyle Topping assisted on both of Kelowna’s goals while Kaedan Korczak had a lone helper. Leif Mattson assisted on Thomson’s goal while scoring Kelowna’s only goal in the third period.

The two teams will renew acquaintances this weekend at the CN Centre in Prince George, B.C.