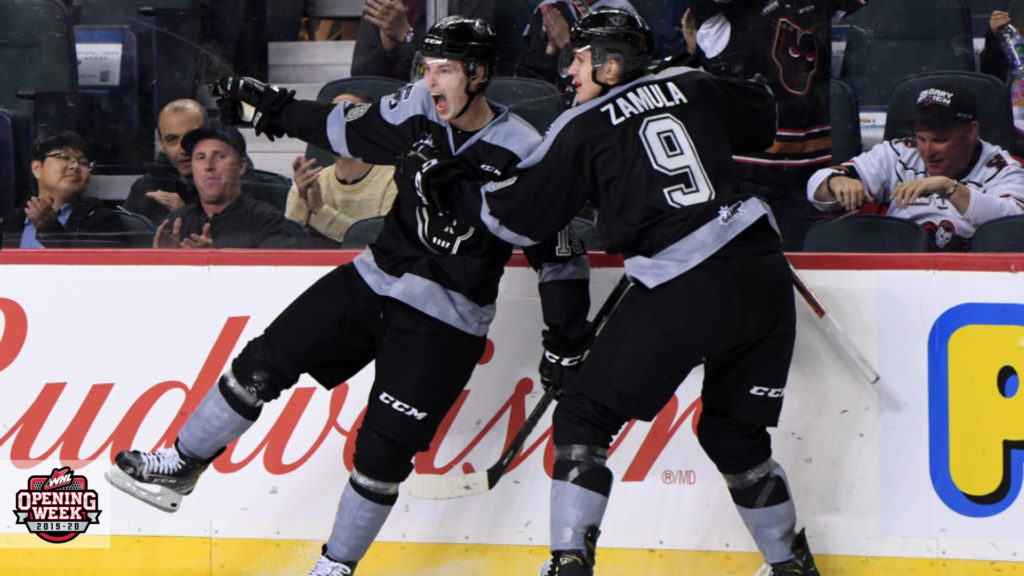 A wild 10 games of action across the Western Hockey League Friday resulted in the Portland Winterhawks remaining the only undefeated team in the entire league heading into the final two days of WHL Opening Week 2019. The Calgary Hitmen and Kamloops Blazers secured their first wins via electric overtime performances on home ice while seven road teams came away with two points in Friday’s action. 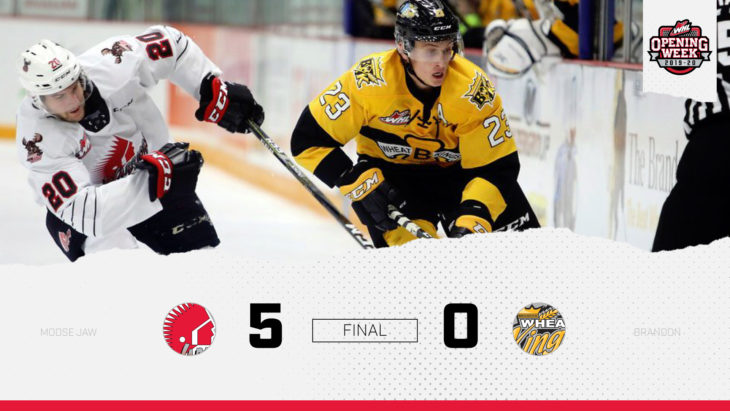 Bailey Brkin stopped all 22 shots for the fourth shutout of his WHL career in a 5-0 win for the Moose Jaw Warriors against the Brandon Wheat Kings. Brkin stopped eight shots in the first, seven in the second, and seven in the third. Eric Alarie, Jadon Joseph, and Kaeden Taphorn each had a goal and an assist while Tate Popple and Keenan Taphorn also found the back of the net. 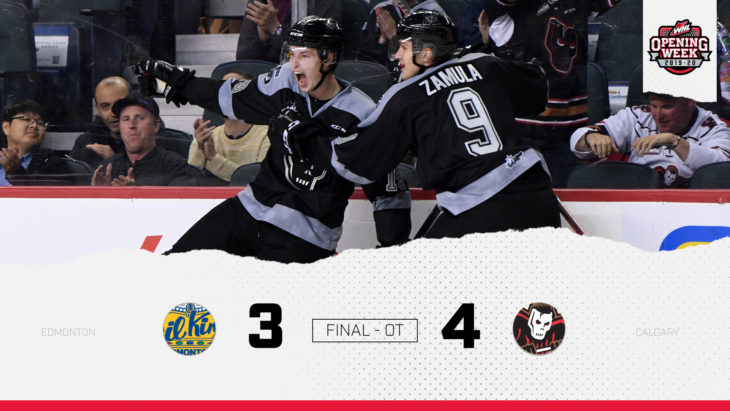 Carson Focht (Vancouver Canucks) had the final two goals of the game as the Calgary Hitmen struck down the Edmonton Oil Kings 4-3 in overtime in their 25th home opener in franchise history. Josh Prokop and James Malm also scored for the Hitmen. Jake Neighbours, Dylan Guenther, and Josh Williams scored for the Oil Kings. 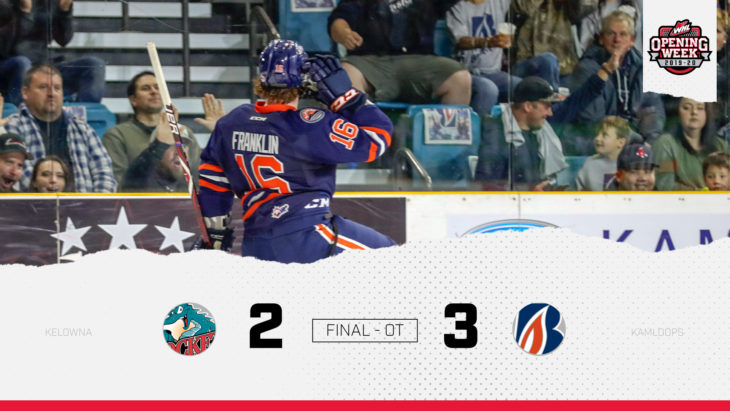 What a debut Ryan Hughes. The newest Kamloops Blazer scored a pair of goals, including the game winner in overtime, as part of a three-point night in a 3-2 win against the Kelowna Rockets. Blazers captain Zane Franklin opened the scoring in the first, but Dillon Hamaliuk (San Jose Sharks) answered back to even up the game after 20 minutes. Hughes scored his first of the game in the third, but Kyle Topping responded with his second goal of the season to tie things up late.

Dylan Garand stopped 18 of 20 shots in the victory. Nolan Foote (Tampa Bay Lightning) collected a pair of assists in the loss. 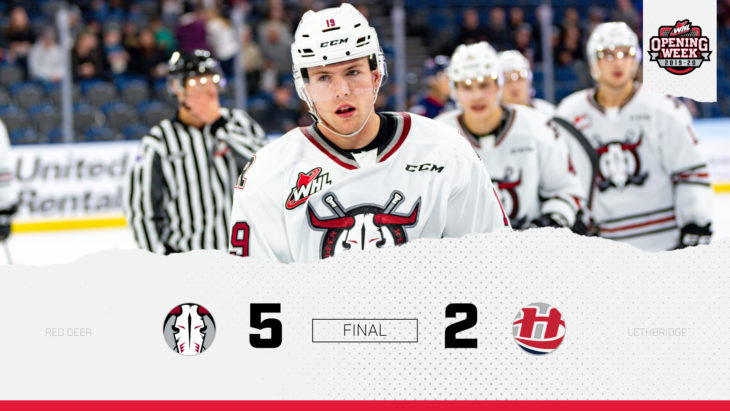 Ethan Anders stopped 40 of 42 shots as the Red Deer Rebels earned their first win of the season in a 5-2 result against the Lethbridge Hurricanes. Josh Tarzwell netted the final three goals for the Rebels while captain Dawson Barteaux (Dallas Stars) and Brett Davis also scored. Dylan Cozens (Buffalo Sabres) and Calen Addison (Pittsburgh Penguins) scored in the loss. 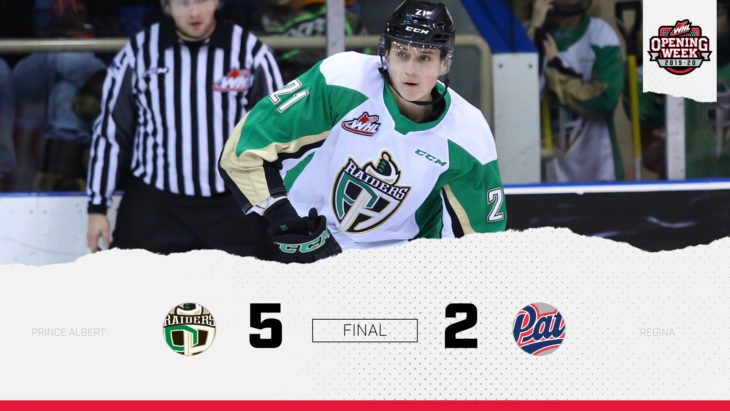 Down 2-0 after 20 minutes, the Prince Albert Raiders scored five-unanswered goals over the final 40 minutes to earn a 5-2 victory against the Regina Pats Friday in the provincial capital. Riley Krane scored twice in the first for the home side, but that’d be it as Cole Nagy, Evan Herman, Aliaksei Protas (Washington Capitals), and a pair of goals from newcomer Brayden Watts accounted for the Raiders’ offence. Boston Bilous stopped 23 of 25 shots in the win. 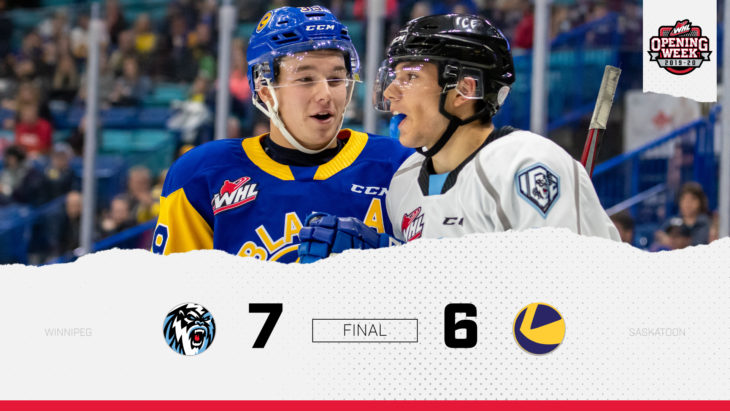 The Winnipeg ICE and Saskatoon Blades played to a crazy 7-6 final in Winnipeg’s favour to begin their weekend road trip Friday. Nino Kinder scored the first goal of his WHL career and finished with a hat trick while Michal Teply (Chicago Blackhawks) had a goal and three points. Kyle Crnkovic had a hat trick as well while defenceman Scott Walford potted a pair of goals as part of a three-point night.

The Tri-City Americans put themselves back in the win column Friday, using a strong performance from Beck Warm to earn a 3-1 win against the Seattle Thunderbirds. Warm stopped 31 of 32 shots in the game, including all 21 through the first 40 minutes of action.

Sasha Mutala (Colorado Avalanche) had a pair of goals while assisting on the other goal for the three-point night. Samuel Huo’s second of the season stood up as the game-winning goal. Andrej Kukuca scored the lone goal for the Thunderbirds in the loss. 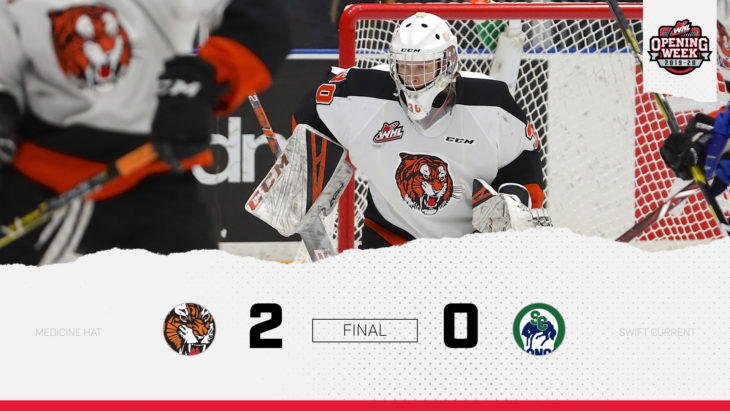 Ottawa Senators prospect Mads Søgaard stopped all 25 shots Friday for the fourth shutout of his WHL career in a 2-0 win against the Swift Current Broncos. Søgaard stopped seven shots in the first, 13 in the second, and five in the third for the victory. Tyler Preziuso and Bryan Lockner scored in the third period for the Tigers while captain James Hamblin had a pair of assists. Isaac Poulter stopped 45 of 47 shots for the Broncos. 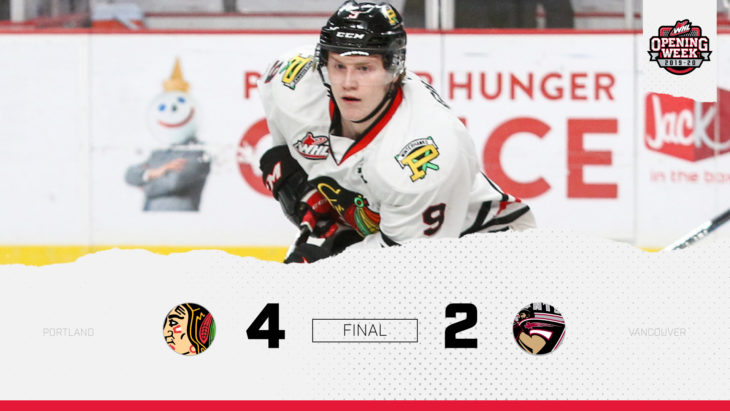 Tyson Kozak scored the first two goals of his WHL career as the Portland Winterhawks doubled up the Vancouver Giants by a 4-2 score in the Giants’ home opener Friday. Clay Hanus opened the scoring and Lane Gilliss notched the game-winning goal early into the second period. Milos Roman (Calgary Flames) and Tristen Nielsen answered back for the Giants in the loss.

Joel Hofer (St. Louis Blues) stopped 33 of 35 shots for the victory. Bowen Byram (Colorado Avalanche) recorded a pair of assists in the loss. 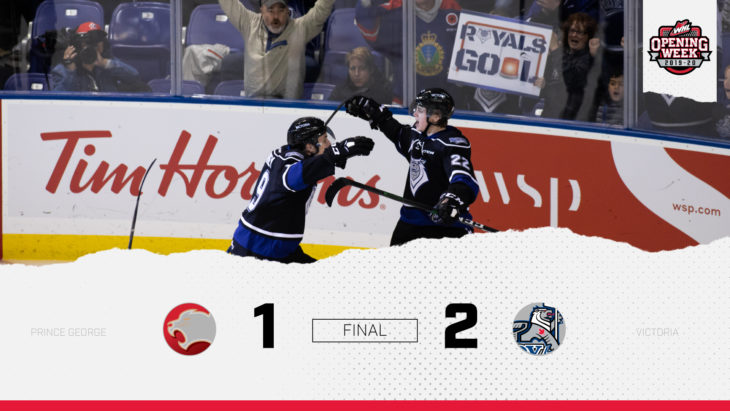 The Victoria Royals earned their first win of the 2019-20 WHL Regular Season with a 2-1 decision over the Prince George Cougars in their home opener. Shane Farkas stopped 22 of 23 shots for the win. Carson Miller and Keanu Derungs scored for the Royals while Matéj Toman scored for the Cougars. Taylor Gauthier stopped 33 of 35 shots in the narrow loss.