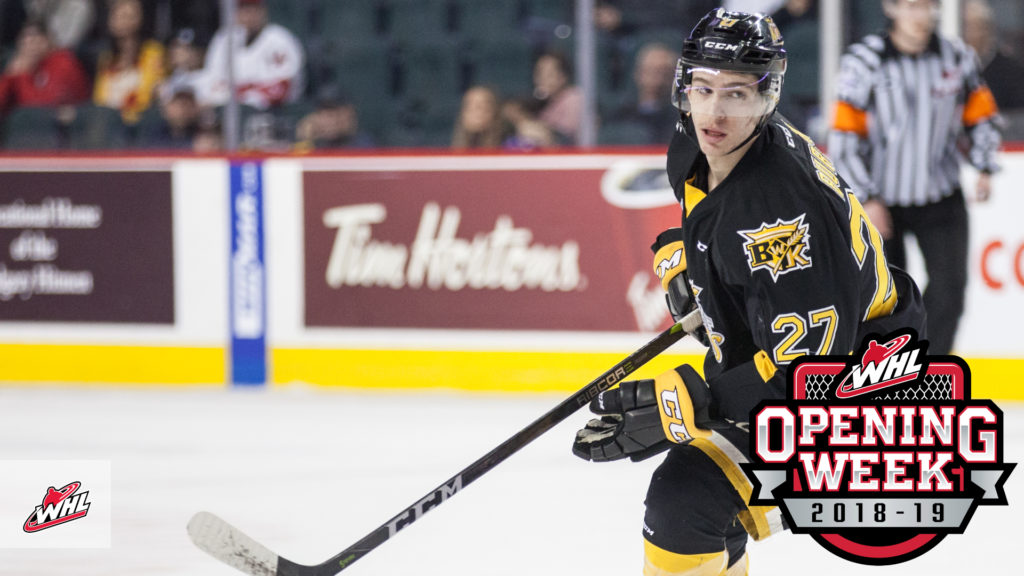 3. Riley Sutter, Everett Silvertips: On the same day he signed a three-year, entry-level contract with the Washington Capitals, Riley Sutter had himself a strong performance in Kennewick, Wash., tallying two goals and adding an assist in a 3-2 win over the Americans.

Sutter scored Everett’s first and third goals in the contest as they captured their second victory in a row and first on the road this season. This season, Sutter has now recorded five points (2G-3A) in four games, including one power-play goal and the aforementioned game-winning goal. Sutter surpassed the 100-point threshold in Saturday’s game, giving him 101 points (48G-53A) in 170 career WHL regular season games. 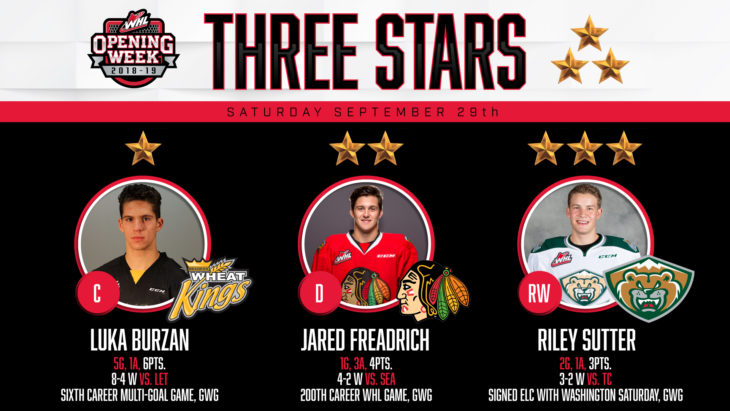 -A five-goal night from Brandon Wheat Kings forward Luka Burzan kept the WHL’s lone Manitoban club perfect on the year as they dispatched the Lethbridge Hurricanes by an 8-4 score. The Surrey, B.C. product scored Brandon’s second, third, fifth, seventh, and eighth goals Saturday, helping the Wheat Kings double up the Hurricanes by the same score the Hurricanes had won by a night earlier in Regina.

-Through, 42:07, it looked like it wasn’t going to be a winning night for the Prince Albert Raiders with the team down 4-1 early in third. Less than 20 minutes on the scoreboard later, Parker Kelly (Ottawa Senators) had scored the game-tying goal late, then added the winner in overtime to complete the miraculous comeback.

Sergei Sapego had the only goal of the first period from both sides, but that all changed in the second. Justin Almeida (Pittsburgh Penguins) tallied his second of the season 19 seconds into the middle period and Braden Tracey scored twice to build up a 3-1 lead after 40 minutes for the Warriors. An early third period goal from Yegor Buyalski appeared to ice the game, but the Raiders found their resolve with goals from Aliaksei Protas, Justin Nachbaur, and Kelly’s first of the game to close out regulation, before winning it in overtime.

-The Edmonton Oil Kings spoiled the home opener for the Calgary Hitmen, claiming a 6-3 win and a 5-0-0-0 record to begin the 2018-19 WHL Regular Season. First period goals from Quinn Benjafield, Jake Neighbours, and Carter Souch put the Oil Kings firmly in control. Jacson Alexander’s first of the season featured as the only goal of the second to build Edmonton’s lead to four.

Benjafield and Souch each finished with a three-point night while Brett Kemp added a pair of assists. Dylan Myskiw stopped 41 of 44 shots to earn his third win of the season while maintaining a 2.00 goals-against-average and a 0.944 save percentage.

-Dawson Barteaux (Dallas Stars) tallied a goal and three points while Alexander Alexeyev (Washington Capitals) added a pair of assists as the Red Deer Rebels topped the visiting Swift Current Broncos. Goals from Brandon Hagel and Barteaux featured in the second to open the scoring. Austin Schellenberg, Zak Smith, and Josh Tarzwell all scored in a 4:07 span to bust the game wide open. Late goals from Matthew Culling and Connor Horning featured for the Broncos, but it wasn’t enough to prevent them from taking another loss.

Hagel added an assist in the victory for the multi-point performance while goaltender Byron Fancy stopped 24 of 26 shots for his first career WHL victory in the game.

-An intense 10-round shootout saw Dawson Davidson convert and Nolan Maier come up big with another timely save as the Saskatoon Blades remained perfect in the 2018-19 WHL Regular Season.

A pair of goals from Tigers captain James Hamblin bookended a goal from Chase Wouters to keep the Tigers ahead by one after 20 minutes. After a scoreless second, Kristian Roykas Marthinsen (Washington Capitals) tallied his first career WHL goal 62 seconds into the final period to tie up the game. Hayden Ostir and Max Gerlach tallied goals later in the third to send the game to overtime and subsequently a shootout.

Maier finished the game with 29 saves on 32 shots, adding eight stops on 10 shootout shots. Mads Sogaard’s WHL debut saw him stop 39 of 42, following with seven saves in the shootout.

-The Portland Winterhawks successfully defended home ice against the Seattle Thunderbirds Saturday night, doubling up their U.S. Division rivals by a 4-2 score.

Defenceman Jared Freadrich tallied four points, including the game-winning goal as the Winterhawks also won for the first time this season. Jake Gricius, Reece Newkirk, and Joachim Blichfeld (San Jose Sharks) also scored in the victory with Blichfeld enjoying a three-point game. Shane Farkas stopped 30 of 32 shots in the win while Liam Hughes stopped 38 of 41 in the loss. Zack Andrusiak and Dillon Hamaliuk scored for the Thunderbirds in the loss.

-The Everett Silvertips became the first team to score a win against the Tri-City Americans this season, claiming a tight 3-2 decision at the Toyota Centre Saturday night.

Fresh off signing a three-year, entry-level contract earlier in the day, Riley Sutter (Washington Capitals) scored twice and added an assist. Captain Connor Dewar (Minnesota Wild) scored the second Silvertips goal of the game as part of a 2-0 lead the visitors built after 20 minutes. Wyatte Wylie (Philadelphia Flyers) added a pair of assists and 2019 NHL Draft prospect Dustin Wolf stopped 22 of 24 shots in the loss.

-Down 3-1 early in the second period, the Victoria Royals scored five unanswered goals to coast to a 6-3 victory and a weekend sweep of their B.C. Division rivals.

Amazingly, six different Royals scored in the victory, with D-Jay Jerome, Dino Kambeitz, Tarun Fizer, Dante Hannoun, Phillip Schultz, and Brandon Cutler all finding the back of the net. Jermaine Loewen (Dallas Stars), Zane Franklin, and Brodi Stuart all scored for the Blazers in the loss. Igor Martynov added three assists while Ralph Jarratt picked up a pair of helpers. Griffen Outhouse stopped 35 of 38 shots in the victory.

-A three-goal first period delivered the first win of the season for the Kelowna Rockets while ending the Prince George Cougars’ two-game winning streak Saturday in northern British Columbia.

Lassi Thompson scored 23 seconds into the game, followed by Kyle Topping, and Leif Mattson before the 10-minute mark of the opening period. Austin Crossley got one back for the Cougars towards the end of the first and Ryan Schoettler added his second of the season in the second period, but both Foote and Mattson found the back of the net in the middle and third period respectively to keep the game in their grasp.

Mattson finished with a pair of goals and three points while Foote tallied a goal and two assists. James Porter stopped 37 of 39 shots in the game to pick up the victory.

-Starting the game with six-straight goals was enough to power the Spokane Chiefs to a home-and-home sweep of the Kootenay ICE Saturday in the team’s home-opening contest.

Riley Woods scored twice and added an assist while Jake McGrew (San Jose Sharks) had a goal and three points. Luke Toporowski and Eli Zummack added a pair of assists in the win while Ty Smith (New Jersey Devils) added a single assist in his return to the Chiefs’ lineup. Davis Murray scored twice while 2019 NHL Draft prospect Peyton Krebs had the other ICE goal.