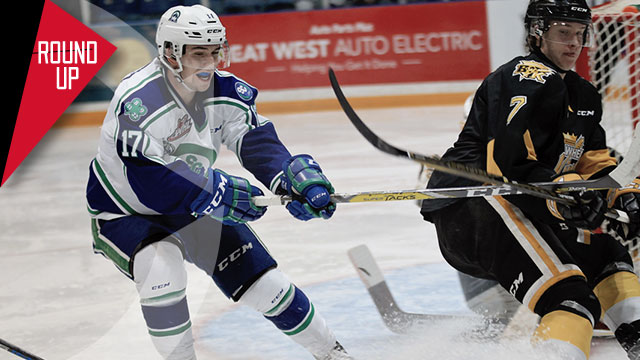 The Swift Current Broncos didn’t hold back Saturday night at Westman Place, putting up five goals in the first period and rolling to an easy victory over the Wheat Kings.

Just as they had done in their first two games of the season, the line of Glenn Gawdin, Tyler Steenbergen and Aleksi Heponiemi continued to showcase their offensive skills, scoring five goals and combining for 13 points in the victory. Steenbergen led the way Saturday with four goals and five points.

Heponiemi also had five points, finishing with a goal and four assists while Gawdin finished with thee assists in the game.

The Broncos were on the Wheat Kings from the opening puck drop. Colby Sissons opened the scoring 2:53 into the game, followed by a power play goal from Kaiden Elder two minutes later. Steenbergen then scored his first of the night 8:56 into the first. Heponiemi tallied his first of the season moments later followed by Steenbergen’s second 82 seconds later to cap the scoring.

Seemingly sparked by the intermission, the Wheat Kings did manage to make things interesting in the second as Rylan Bettens and Stelio Mattheos answered back, but the deficit was too large.

Steenbergen scored mid-way through the second and then again early in the third to complete his five-point performance.

Logan Flodell was once again sharp in net, making 28 saves for his second straight victory and the 50th of his WHL career.

Logan Thompson allowed five goals on 11 shots before being pulled, with Dylan Myskiw making 10 saves on 12 shots in relief.

The Broncos will look to keep their perfect record in tact next Friday in Saskatoon while the Wheat Kings will start a three-game road trip in Edmonton next Friday.

ANOTHER ONE! 7-2 score. @T_Steener buries his fourth of the night! The man is on fire! #OurTeamOurTown

A hat trick from Jack Flaman and 19 saves from Stuart Skinner helped the Lethbridge Hurricanes earn a split in a home-and-home with the Edmonton Oil Kings Saturday in Lethbridge.

Colton Kehler scored the opening goal of the game to put the Oil Kings ahead early, but the Hurricanes fought back with a pair of goals in the second and third period each.

Flamen opened the scoring for the Hurricanes 14:05 into the middle period then lit the lamp again with 48 seconds to go in the frame. Flamen completed his natural hat trick 6:38 into the third and Brennan Riddle tallied an empty-netter with 43 seconds to go to seal the victory.

Boston Bilous took the loss for the Oil Kings, making 19 saves while Skinner stopped every shot he say in the final two periods.

The Hurricanes are back at home next Friday to host the Prince Albert Raiders while the Oil Kings will host the Brandon Wheat Kings next Friday at Rogers Place.

In a battle of two undefeated clubs, the Moose Jaw Warriors defended their home turf successfully Saturday at Mosaic Place.

Captain Brett Howden and Dmitri Zaitsev each had a pair of assists and four different Warriors skaters scored in the victory. In net, Brody Willms stopped 17 of the 19 shots he faced to earn his fourth victory of the season.

Brayden Burke and Justin Almeida got the Warriors on the board in the first period, though Grayson Pawlenchuk got the visiting Rebels on the board before the period was out.

Tristan Langan restored the two-goal lead for the Warriors early in the second, but the Rebels kept it close, with Mason McCarty’s fourth of the season keeping the Rebels within striking distance of the lead. An empty-net goal from Jayden Halbgewachs snuffed out any chance of a comeback though, send the Warriors to their fourth win of the season.

Ethan Anders took the loss for the Rebels, making 31 saves in his WHL debut.

Third period goals from Parker Kelly and Curtis Miske broke open a 2-2 tie after 40 minutes to help the Raiders to victory Saturday night at the Art Hauser Centre.

The teams traded goals in the first two periods with Gary Haden opening the scoring for the Tigers before Cole Fonstad tied up the game two minutes later. The second period played out the same way, with Max Gerlach giving the Tigers a one-goal cushion before Devon Skoleski tied the game up with his third of the season late in the period.

Finding the strength to push through in the third, Kelly tallied the game-winner 4:13 into the final period before Miske put the game out of reach.

Playing in his first full game of the season, Raiders goaltender Curtis Meger made 30 saves to bring his team back to five-hundred on the season.

The Raiders head out onto the road next weekend for a swing through southern Alberta starting Friday in Lethbridge. The Tigers will welcome the Regina Pats to the Canalta Centre next Friday to kick-off a five-game home stand.

Matthew Quigley had a goal and a two-point night while Joachim Blichfeld had two assists in the rout at home. Vegas Golden Knights draft pick Cody Glass opened the scoring 11:56 into the first, only to have Austin Strand respond for Seattle less than two minutes later.

Skyler McKenzie would put the Winterhawks up by one a few minutes later and Henri Jokiharju scored 87 seconds into the second period to begin the rout. Strand’s second of the contest brought the Thunderbirds within a goal, but it didn’t seem to matter to the Winterhawks.

Quigley scored early in the third and Brad Ginnell rounded out the scoring with his first of the season to close out the game.

Cole Kehler had a relatively light workload Saturday, facing 16 shots to pick up his second win of the season. Liam Hughes faced a barrage of shots, making 45 saves on 51 shots.

The Winterhawks play host to the Prince George Cougars Sunday afternoon while the Thunderbirds are back on the road Tuesday in Kennewick, Wash. to face the Tri-City Americans.

The Saskatoon Blades bolted out of the gate Saturday at the SaskTel Centre and held on for their first victory of the season, downing the visiting Calgary Hitmen 5-4.

Braylon Shmyr had a pair of goals, including the game-winner late in the third period, and three points to send his team to victory while Ryan Kubic made 19 saves for his first win with his new club.

Shmyr started the scoring 5:47 into the first and Kirby Dach notched his first career WHL goal a few minutes later to build an early lead. Matteo Gennaro got one back for the Hitmen, but Caleb Fantillo restored the two-goal lead. Mark Kastelic put the cap on a frantic first period with his first of the season to close the gap to one after 20 minutes.

Matthew Armitage took the loss in net for the Hitmen, making 24 saves.

The Blades close out their four-game home stand against the Swift Current Broncos next Friday. The Hitmen head home to host the Everett Silvertips next Friday.

The Kootenay ICE turned the tables on the Spokane Chiefs Saturday night as the teams completed a home-and-home series in Spokane, Wash.

After taking a one-goal defeat Friday on home ice, Kootenay earned a 2-1 victory south of the border.

Kurtis Chapman made 16 saves on 17 shots for his first career WHL victory. Dawson Weatherill made 21 saves on 23 shots for the Chiefs in the losing effort.

The ICE are back at Western Financial Place Sunday for an afternoon date with the Edmonton Oil Kings while the Chiefs will welcome the Everett Silvertips to the Spokane Veterans Memorial Arena on Wednesday in the first match of the season series between the two clubs.

Goals from Juuso Valimaki and Morgan Geekie in the final four minutes of the third to cap a wild 5-4 win for the Tri-City Americans at home.

Valimaki and Isaac Johnson each had a goal and two assists while Geekie finished with a pair of points in the victory. Matt Fontyene had two goals and three points in the loss while Patrick Bajkov had a pair of assists.

Johnson started the scoring 1:58 into the first, getting the home side on the board early. Fontyene responded soon after for the Silvertips, evening the score after 20 minutes.

The Silvertips jumped out into the lead in the second. After Dylan Coghlan notched his first of the season, Orrin Centazzo and Fontyene tallied goals to put the visitors up by one. Brett Leason did get one back for the Ams near the end of the period to keep things tied headed to the third.

Connor Dewer opened the scoring in the third to put Everett up by a single goal once again, but the Ams had no quit in them on this night.

Beck Warm took the win for the Americans between the pipes, making 33 shots. Carter Hart and Dorrin Luding combined to make 30 saves in the contest.

The Americans host the Seattle Thunderbirds this coming Tuesday while the Silvertips are back in action Wednesday on the road in Spokane.

Ryan Peckford’s second goal of the game Saturday was the difference as his power play goal with 41 seconds to go helped the Victoria Royals edge the Kamloops Blazers at home.

Peckford started the scoring 6:04 into the first, but the Blazers answered right back with Jackson Shepard equalizing the game nine seconds later.

After Dante Hannoun scored the lone goal of the second period to put the Royals up by one, the Blazers came back in the third.

Joe Gatenby tied up the game 7:11 into the final period before Kaid Oliver put the Royals up by one again less than two minutes after Gatenby’s goal.

Nic Holowko scored his second of the season to even up the game once again. Both teams appeared headed for overtime when Gatenby took a tripping penalty with 51 seconds to go. From there, it took the Royals all of 10 seconds to strike and go ahead for good.

Griffen Outhouse stopped 38 of the 41 shots sent his way while Dylan Ferguson kept the Blazers in it until the end, making 35 saves in the loss.

Royals captain Matthew Phillips chipped in with three assists while Nick Chyzowski had a pair of assists for the Blazers.

The two teams will meet back at the Save-on-Foods Memorial Arena Sunday afternoon to close out the weekend for each club.

Make it a final in #yyj! Royals win 4-3 as Ryan Peckford scores his 2nd of the night with just 30 seconds remaining!