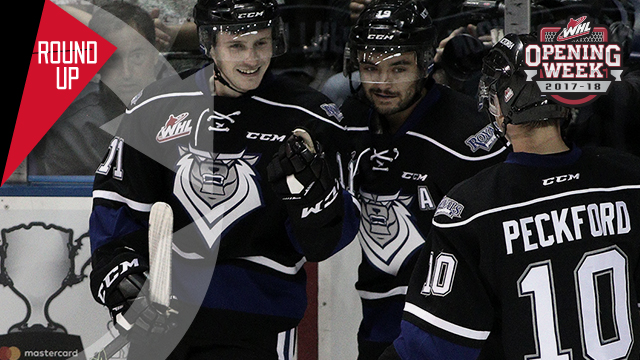 Mattheos opened the scoring midway through the first period, with Reinhardt following up moments later. Mattheos found the back of the net with his second power-play goal of the first period, giving the Wheaties a 3-0 advantage.

The Pats got one back before the first period closed, as Braydon Buziak notched the first marker of Regina’s 100th season with a power-play effort. Unfortunately for the Queen City kids, that’s all they’d manage Friday evening.

Ty Lewis scored twice in the second period to extend the hosts lead before Reinhardt, Rylan Bettens and Connor Gutenberg piled on in the third period.

Braden Schneider (2A), Schael Higson (2A), Tanner Kaspick (2A) and Gutenberg (1G-1A) all logged multipoint nights to help Brandon along.

Goaltender Logan Thompson turned in a solid performance, making 33 saves for the win.

The Pats will get a shot at revenge Saturday evening when they host the Wheat Kings back at Regina’s Brandt Centre.

A new era for the Kootenay ICE began on a winning note as Michael King scored twice to power his club to a 3-2 victory over the Calgary Hitmen Friday evening.

King struck twice in the first period, before Jake Kryski got the Hitmen within one near the end of the opening period.

After a scoreless second period, import defenceman Vladislav Yeryomenko knotted the game 2-2 with 12:39 to go in regulation. But it was Gilian Kohler, the third-overall selection from the 2017 CHL Import Draft, finding the back of the net a mere 12 seconds later to restore the Kootenay lead.

In front of a raucous crowd of 3,392 at Western Financial Place in Cranbrook, the ICE shutdown the visiting Hitmen to hold on for a 3-2 triumph.

Kootenay and Calgary will reengage Saturday night at the Scotiabank Saddledome.

Michael King had a big night, two goals in the ICE 3-2 victory over the Hitmen. He talks about what they have to do tomorrow. #ICEcountry pic.twitter.com/XHQZuwsSeI

The Moose Jaw Warriors took care of business in the away side of a home-and-home with the Prince Albert Raiders.

Brayden Burke scored the game-winner 6:36 into the second period and Brody Willms stopped all 21 shots he faced as the Warriors recorded the lone shutout of opening night around the league.

Justin Almeida doubled the Warriors’ lead early in the third. Making their night tougher, the Raiders lost goaltender Ian Scott 16 seconds later on a collision at the net as the Toronto Maple Leafs draft pick had to be helped off the ice. after making 26 saves on 28 shots.

Nicholas Sanders replaced him, making 11 saves, though he gave up a goal later on to Jett Woo to seal the game in the Warriors’ favour.

.@Jett_Woo puts the @MJWARRIORS up 3-0 on Prince Albert early in the third period with his first of the year. #WHLOpeningWeek pic.twitter.com/BZHVLsSTNJ

Jadon Joseph had himself a game Friday at the Enmax Centre.

The sophomore center notched a pair of goals and an assist for a three-point game as the Lethbridge Hurricanes defended their home turf in the opening of an all-Alberta matchup this weekend against the Medicine Hat Tigers.

Joseph’s first goal, late in the second period, ended up as the game-winner. Giorgio Estephan, Dylan Cozens and Zane Franklin also scored for the Hurricanes in the victory.

Mark Rassell and Gary Haden responded for the Tigers, who got on the board first and held the lead twice, but didn’t come away with the win.

The two teams head to Medicine Hat Saturday to complete the home-and-home series.

The @WHLHurricanes take the lead once again as @jadonj9 makes a beautiful play in front of Michael Bullion. #WHLOpeningWeek pic.twitter.com/CNKM4mVqZL

The Swift Current Broncos scored four times in the third period to defeat the Saskatoon Blades by a 5-2 spread Friday night.

Trailing 2-1 heading into the final 20 minutes of regulation, Riley Stotts knotted the affair 2-2 only 3:43 into the final period. Midway through the period, Conner Chaulk walked into the slot and rifled a blast past Blades goaltender Ryan Kubic to put the Broncos in front 3-2.

From there, the Broncos added a pair of empty-net goals – one courtesy Glenn Gawdin and the other from Artyom Minulin – as they claimed the 5-2 win.

Joel Hofer earned the start for Swift Current, making 23 saves for his first career WHL victory.
The Broncos return to action Wednesday, September 27, when they visit the Regina Pats. The Saskatoon Blades next take to the ice on Friday, September 29, when they host the Medicine Hat Tigers.

The @SCBroncos can “Chaulk” up their first win of the 2017-18 season thanks to a this GWG by @ConnerChaulk97. #WHLOpeningWeek ? pic.twitter.com/fMegBPFlGj

Ty Smith logged a goal and two assists, helping lead the Spokane Chiefs to a 4-2 win over the Prince George Cougars, spoiling a Friday night party that saw the hosts raise their 2016 B.C. Division Championship banner to the rafters.

Taylor Ross opened the scoring 7:30 into the game and seven minutes later it was Riley Woods executing shorthanded to extend the advantage to 2-0 for the Chiefs.

Hudson Elynuik added a power-play marker 8:45 into the second period, but a one-time blast from Nikita Popugaev got the Cougars on the board and back in the game less than eight minutes later.

In the final minute of the middle period, Smith struck with a one-time rocket of his own from the Spokane point, restoring the three-goal cushion heading into the second intermission.

Ethan O’Rourke got Prince George back within two in the final period, but that’s as close as they’d get.

Dawson Weatherill notched 28 stops along with an assist, earning his first victory of the season.

The Chiefs will look to make it two in a row at the CN Centre when they faceoff with the Cougars once again on Saturday.

Phillips’ first of the night came short-handed and only 12 seconds into the second period, giving the Royals a 3-0 lead. After Ryan Peckford and Ty Ronning exchanged strikes to close out the second period, Phillips opened the third by scoring twice before the five-minute mark to complete the hat trick, giving Victoria a commanding 6-1 advantage in the process. 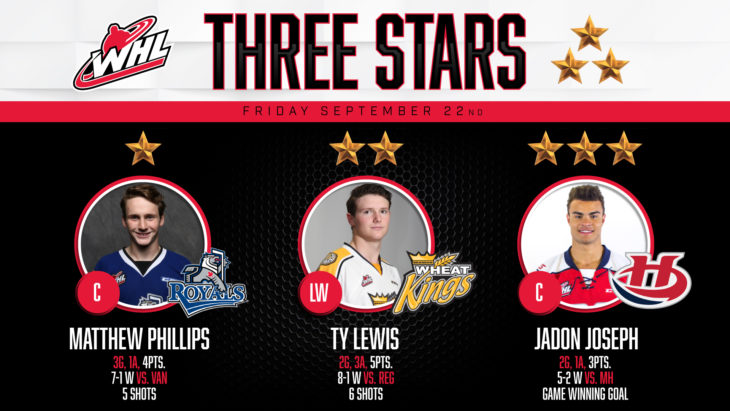 Griffen Outhouse made 31 saves on 32 shots, but left the game late in the third, giving way to Dean McNabb, who stopped all four shots sent his way.

Peckford finished the night with three points (2G-1A), while Eric Florchuk (2A), Dante Hannoun (2A), Jared Legien (2A), and Jared Freadrich all posted multipoint nights.

The Royals will face the Giants Saturday night, but this time back in Langley.

Take a bow, Mr. Phillips. ??? Make it three on the night for @mattphillips_8! #WHLOpeningWeek pic.twitter.com/ZJZayBcck6

Kyle Topping and Kole Lind both recorded three points as the Kelowna Rockets cruised past the Kamloops Blazers 6-2 Friday night.

Lind’s lone strike of the night came 36 seconds into the second period and went on to stand as the eventual game-winning marker. It also happened to spark a four-goal second period for the hosts, with Topping, Liam Kindree and Jack Cowell following up on the scoresheet. That outburst gave Kelowna a clear-cut 6-0 lead after 40 minutes of play.

Justin Sigrist and Nolan Kneen replied for the Blazers in the third period, while Topping and Tomas Soustal struck in the first period for Kelowna.

Brodan Salmond made 33 saves to earn the win.

The two clubs will head up the highway to Kamloops for a rematch Saturday night.

There’s been a lot of great goals tonight, but we think this one by the @Kelowna_Rockets will be “Topping” the rest. #WHLOpeningWeek pic.twitter.com/4clGm2Ozxu