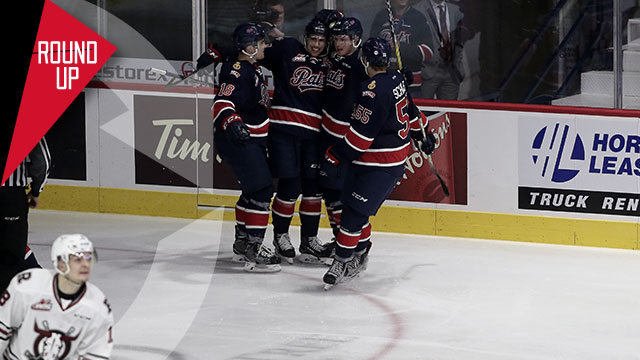 The Edmonton Oil Kings became the first away side to win a contest in regulation at Western Financial Place, downing the Kootenay ICE by a 4-3 final Sunday. A three-goal second period capped by Davis Koch’s second goal of the season was the difference in the game.

Four different players scored for the Oil Kings, who picked up their second one-goal victory of the weekend. Trey Fix-Wolansky got the Oil Kings on the board first, but the ICE were quick to respond, with goals from Cale Fleury and Brett Davis to give to home side a 2-1 lead after 20 minutes.

Matthew Robertson’s first in an Oil Kings uniform was followed shortly after by a goal from Kobe Mohr. Koch rounded out the scoring 12:03 into the middle period as the team’s fourth even-strength goal of the game.

Keenan Taphorn got one back for the ICE in the third, but it was as close as they’d get for the rest of the game.

Travis Child made 21 saves in the win while Bailey Brkin and Kurtis Chapman combined to make 27 saves on 31 shots, with Brkin allowing three goals in the game.

The Oil Kings are at home next Friday to host the Brandon Wheat Kings at Rogers Place while the ICE will head out onto the road next weekend for games in Moose Jaw and Swift Current.

Emil Oksanen continued his hot start to the season Sunday, notching a hat trick to help the Regina Pats to a 6-1 rout of the Red Deer Rebels.

Oksanen opened the scoring midway through the first period and struck again early in the second to put the Pats up 2-0. Mason McCarty cut the lead in half minutes later, getting the Rebels on the board, but it didn’t seem to slow down the Pats.

Oksanen completed his trick 4:27 into the third period to ignite a four-goal period for the Pats as Bryce Platt, Josh Mahura and Dawson Davidson added goals in the final period. Oksanen assisted on Davidson’s goal, giving him four points on the night.

Sam Steel continued to make up for lost time, putting up another three-point effort with three assists Sunday following a goal and two assist performance Friday in Moose Jaw during his season debut.

The Pats make their first venture into Alberta next Friday, taking on the Medicine Hat Tigers. The Rebels will return home for a short two-game home stand starting next Saturday against the Brandon Wheat Kings.

The lone undefeated team in the B.C. Division remained perfect Sunday as the Victoria Royals doubled up the Kamloops Blazers.

Dante Hannoun had a hat trick and four points, but it was Spencer Gerth’s first goal of the season that stood up as the game-winner as Dean McNabb shut the door on the Blazers with 28 saves for his first career WHL victory.

Eric Florchuk put the Royals on the board 2:01 into the game, but the Blazers responded quickly with Ondrej Vala scoring six minutes later to even things up. Matthew Smith put the Royals ahead again in the second, restoring the one-goal lead.

The Blazers managed to even up the game again on Brodi Stuart’s first of the season, but Hannoun tallied his first of the game 18 seconds later to quickly shift momentum back in favour of the home side.

Gerth’s game-winner came 20 seconds into the third period and was responded to by Garrett Pilon’s third of the season, but it wasn’t enough to match the Royals Sunday at home.

Hannoun added a pair of goals late, completing a three-assist game for Jared Legien and two-assist performance for Ryan Peckford. Captain Matthew Phillips recorded an assist to extend his point-streak to four games.

Max Palaga took the loss for the Blazers, making 26 saves in his first game action of the season.

The Royals head west next weekend for a two-game swing starting at Prospera Place Friday against the Kelowna Rockets. The Blazers host the Prince George Cougars at the Sandman Centre Wednesday in the first meeting of the season between the two clubs.

VICTORY! @Dean_McNabb picks up his first WHL win, while @hannoun19 records 4 points (3g-1a) in a 6-3 win against the Blazers! pic.twitter.com/sONGPoMVZI

Tavin Grant couldn’t be beat Sunday in Portland as the Prince George Cougars scored their first victory of the season over one of the best teams in the Western Conference.

Grant made 47 saves, including 23 in the final 20 minutes to preserve a 3-0 win for the Cougars. Kody McDonald’s goal 4:49 into the first period turned out to be the game-winner as Vladislav Mikhalchuk and Jackson Leppard added second period goals.

It was Grant’s night though as he made 12 stops in the first, 12 more in the second and the aforementioned 23 in the third to stonewall one of the league’s top offences that had already put up 13 goals in their first two games.

The Winterhawks went scoreless on six power play opportunities throughout the game. Cody Glass and Alex Overhardt each finished with six shots for Portland in the loss.

Shane Farkas took the loss while making 26 saves on 29 shots at the other end of the ice.

The Cougars will continue their road trip Wednesday in Kamloops against the Blazers. Up next for the Winterhawks is a battle Friday in Spokane against the Chiefs.