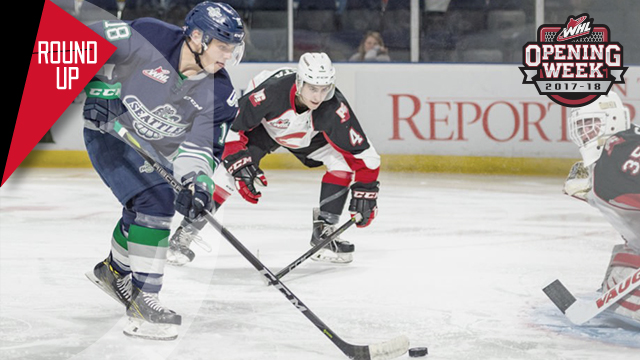 Mason McCarty and Kristian Reichel scored in the shootout as the Red Deer Rebels remained undefeated with a 5-4 victory over the Brandon Wheat Kings Friday night.

Trailing 3-2 after 40 minutes, the Rebels got third period goals from Grayson Pawlenchuk and Reese Johnson to take a 4-3 lead with only 1:47 to go in regulation. Wheat Kings captain Tanner Kaspick came to the rescue, tying the game at 4-4 with his second goal of the game and only seven seconds remaining on the clock.

After McCarty opened the scoring 6:33 into the first period for Red Deer, Clague set up Kaspick for a short-handed tally less than two minutes later to draw the contest even.

Cole Reinhardt notched his third goal of the season 9:10 into the second period, taking advantage of a power-play opportunity to put Brandon in front for the first time in the game. Once again, fans witnessed a quick reply though this time it was Red Deer’s turn to answer as the import Reichel found the back of the net 17 seconds later to make it a 2-2 game.

With time winding down in the second period, rookie Jonny Hooker went to the net with his stick on the ice and was rewarded for his efforts as Stelio Mattheos finished a nice rush by hitting Hooker on the tape for his first career WHL goal.

Lasse Petersen made 34 saves and also turned aside two of three in the skills competition, notching his third win of the season.

Rebels win!!!!!!!! 5-4 shootout victory in Brandon. Kristain Reichel with the shootout winner, Lasse Petersen with a save to preserve it.

The Edmonton Oil Kings made their way into the win column, securing a 7-6 victory over the Lethbridge Hurricanes in a wild affair at Rogers Place Friday night.

The two teams went back and forth, trading heavy exchanges from start to finish.

After Dylan Cozens opened the scoring with a power-play goal for Lethbridge, the Oil Kings rattled off four consecutive goals – two in the first period and another two in the second period.

Will Warm knotted the game 1-1 before Nick Bowman scored his first of the night on a power play to put the Oil Kings up 2-1 after 20 minutes.

Colton Kehler used a power play to extend the Oil Kings advantage in the second period and then Bowman logged his second goal of the evening moments later to put Edmonton ahead 4-1.

Then the tables turned.

Only five seconds after Bowman’s trick tally, Shawn Harke replied on behalf of the Hurricanes, cutting the lead to 4-2. Igor Merezhko pulled Lethbridge one closer before the second period came to a close, finding the back of the net with 3:28 to go.

But this game was far from over.

A mere two seconds after Bellerive’s conversion, Trey Fix-Wolansky sawed things off yet again, tying the game 5-5. With 3:56 to play in regulation, Scott Atkinson notched his first goal of the season and Edmonton was back in front 6-5. Kehler added an insurance marker to make it three straight strikes for the Oil Kings, though recently-acquired Jack Flaman managed to pull the Hurricanes back within one goal with only 10 seconds remaining.

Travis Child held on to make 25 saves and collect his first win as an Oil King.

First W of the season in the books! pic.twitter.com/0Sh11ILPRu

Steel did find the scoresheet in his first game after being returned from the NHL’s Anaheim Ducks, notching a short-handed marker 10:35 into the first period. Late in the period, it was the 6-foot-8 Sosunov evening the score at 1-1 with his first career WHL goal coming on a power play.

The special teams continued to factor in during the second period as Brayden Burke slipped through the Regina defense before pouncing on his own rebound and burying it past Tyler Brown to secure a short-handed goal for a 2-1 Warriors lead. Once again late in the period, Sosunov continued to wreak havoc in the offensive zone, driving the net and putting another puck past Brown to make it 3-1 in favour of the hosts after 40 minutes of play.

The Pats clawed their way back in the third period as Emil Oksanen collected the first two goals of his WHL career. Both came via the man advantage and in a span of 1:45, tying the game 3-3. Jayden Halgbewachs and Dawson Davidson traded markers in the second half of the period, setting the stage for overtime, where Howden finished it.

Brody Willms made 30 saves for the win.

Both Steel (1G-2A) and Mahura (3A) enjoyed multipoint nights in their respective returns.

Vojtech Budik scored 3:07 into overtime as the Prince Albert Raiders claimed their first win of the season with a 6-5 triumph over the Calgary Hitmen.

The Hitmen owned a 4-3 lead after 40 minutes of play, but that was erased as Jordy Stallard and Spencer Moe scored back-to-back to give the Raiders a 5-4 advantage.

After Parker Kelly and Devon Skoleski combined to give the host Raiders a 2-1 lead following 20 minutes of play, the Hitmen rattled off three goals in a span of 3:17 late in the second period to take a 4-2 lead. Gennaro registered his first of the season with an unassisted short-handed effort 12:35 into the second period. Then it was Andrei Grishakov tallying his second of the campaign 2:17 later before Jakob Stukel followed up 60 seconds after.

The Raiders did get one back before the middle period came to a close, as Max Martin logged his first of the season with 2:22 to go before the second intermission.

Curtis Meger earned the win, coming on in relief of Nicholas Sanders to make six saves on seven shots.

Stallard (1G-2A), Cole Fonstad (2A) and Curtis Miske (2A) enjoyed multipoint nights for the Raiders.

.@budikvojtech29 scored the OT winner to give the Raiders a 6-5 victory over Calgary!

Ty Smith collected a goal and two assists as the Spokane Chiefs completed the comeback to edge the Kootenay ICE by a 6-5 margin in overtime Friday night.

Peyton Krebs put up a casual four points, but it wasn’t enough to get the ICE back into the win column.

Trailing 4-1 heading into the third period, the Chiefs receiving scoring from Jaret Anderson-Dolan and Riley Woods, who tallied twice, to tie the game in the final period. Rykr Cole completed the comeback with the overtime dagger 1:59 in.

Krebs logged assists on both of Kootenay’s first period goals, setting up Barrett Sheen and then contributing on a power-play effort converted by Alec Baer.

Baer continued his roll in the second period, notching another power-play goal, with an assist to Krebs, to give the ICE a commanding 3-0 lead. Moments later, the 16-year-old product of Okotoks, Alta., registered his first goal of the season to extend the lead to 4-0.

The Chiefs managed to find the scoresheet in the second period as sophomore as Smith found the back of the net to make it a 4-1 game with 2:50 to play.

Riley McKay and Woods combined to pull the Chiefs within one, scoring twice in a span of 2:10 early in the third period. But another power-play goal from the ICE, this one courtesy Vince Loschiavo, provided some added insurance for the hosts.

Dawson Weatherill made 31 saves for the win.

? Chiefs climb back from 4-0 deficit to win OT thriller at @WHLKootenayICE, 6-5! #GoChiefsGo

Max Gerlach notched four points, including two goals, as the Medicine Hat Tigers knocked off the Saskatoon Blades by a 6-2 score Friday night.

The Tigers built a 6-0 lead, scoring twice in the first period and four times in the second period.

Gerlach opened the scoring with back-to-back markers. The second period saw Mark Rassell score twice – once on the power play and the other at even strength. Ryan Jevne also secured a power-play goal, while Cole Clayton provided the other strike.

Chase Wouters and Gage Ramsay scored in the third period for Saskatoon.

Michael Bullion made 21 saves for the win.

Patrick Bajkov and Matt Fonteyne scored in the shootout as the Everett Silvertips completed the comeback to sneak past the Kelowna Rockets 4-3 Friday night.

Cal Foote, Libor Zabransky and James Hilsendager scored consecutively before the midpoint of the second period to give Kelowna a commanding 3-0 advantage.

Fonteyne got the visitors on the board moments after Hilsendager’s marker, making it a 3-1 game after 40 minutes of play.

Connor Dewar and Riley Sutter combined to even the score in the third period.

Carter Hart made 35 saves in his return to the Silvertips, earning first star recognition and the win.

Down 3-0? No problem. TIPS WIN!!! pic.twitter.com/mPPRYCcec2

Milos Roman recorded four points, including three assists, as the Vancouver Giants doubled up the Kamloops Blazers by a 6-3 final Friday night.

Roman scored his first career WHL goal with 1:17 to play in the first period, giving Vancouver a 3-1 lead following goals from Owen Hardy and Brayden Watts, along with Nic Holowko’s reply for Kamloops.

Roman then set up Ty Ronning for the eventual game-winner in the second period. Garrett Pilon got the Blazers back within striking distance, making it a 4-2 game before the buzzer sounded to end the second period.

Pilon’s second of the night came only 1:28 into the third period, turning the contest into a one-goal game. But Ronning registered his second of the evening, complete with an assist from Roman, to restore the two-goal advantage for the hosts.

Veteran Brad Morrison completed the scoring late in the third period with his first of the season, also assisted by Roman.

David Tendeck made 43 saves for the victory.

Moilanen scored once in each period, pacing the Seattle offense. Reece Harsch and Donovan Neuls also tallied for the defending WHL Champions.

Dennis Cholowski scored on a power play, providing the lone marker for the Cougars.

Between the pipes, Matt Berlin turned aside 33 of 34 shots for the win.