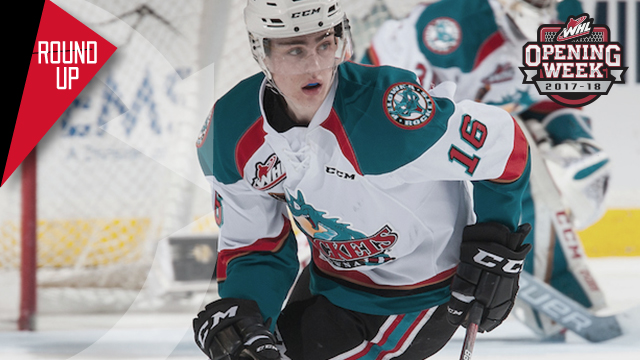 Rookie George King opened the scoring for the Pats, securing a power-play marker 12:25 into the night. With only 21 seconds to go in the first period, Bradley was awarded a penalty shot. The veteran scorer made no mistake on the glorious opportunity, beating Logan Thompson to extend the Pats lead to 2-0 heading into the first intermission.

The Wheat Kings struck back in the second period. Carolina Hurricanes prospect Stelio Mattheos scored back-to-back power-play goals in a span of 2:53 to tie the game at 2-2. Before the middle period came to a close, 20-year-old Wyatt Sloboshan found the back of the net to restore the Regina lead, making it a 3-2 game heading into the second intermission.

Bradley beat Thompson for the second time in the game and third time in two nights, registering an even-strength marker to provide some insurance for the hosts.

With time winding down, captain Tanner Kaspick managed to sneak another past Pats goaltender Tyler Brown, getting the Wheat Kings within one goal with only 38 seconds to go in regulation. But that’s as close as Brandon got.

Brown bounced back, making 15 saves on 18 shots to get his first win of the campaign.

?Penalty shot alert ?
The @WHLPats double their lead as @Matt_Brad37 scores on a penalty shot. 2-0 Pats after 20! ? pic.twitter.com/q0tY4PDrE9

The Moose Jaw Warriors received three-point nights from each of Noah Gregor, Tanner Jeannot and Brayden Burke en route to a 7-3 win over the Prince Albert Raiders Saturday night.

The Warriors got three goals in the first period, getting out ahead of the Raiders early on as Halbgewachs, Brecan Wood and Jeannot combined to give Moose Jaw a 3-1 advantage through 20 minutes of play. Veteran Devon Skoleski provided the reply for Prince Albert in the opening 20 minutes.

The two teams exchanged strikes in the middle period, with defenceman Jett Woo notching his second of the season for Moose Jaw, while Jordy Stallard found the back of the net on the power play to keep the Raiders within a pair heading into the final period.

Brayden Burke extended the lead only 53 seconds into the third period, but Parker Kelly responded moments later to keep the contest a two-goal game. Gregor and Justin Almeida shut down any comeback hopes for the Raiders by pushing the score to 7-3 later in the third period.

The Calgary Hitmen scored three times in the third period to defeat the Kootenay ICE by a 3-1 margin Saturday night.

Colton Kroeker scored a beautiful goal to give the ICE a lead in the second period. Shredding through the Calgary defence, the 20-year-old product of Surrey, B.C., drove the net before slipping a forehand shot around the extended pad of goaltender Nick Schneider to break a scoreless tie 6:55 into the middle period.

The third period featured a response from the host Hitmen. Andrei Grishakov and Andrew Fyten scored within five minutes of one another to turn the tables on the ICE, giving Calgary a 2-1 edge 5:55 into the final period. Jackson van de Leest collected his first career WHL goal, icing the outcome with an empty-net marker late in the proceedings.

Schneider made 24 saves for his first win as a member of the Hitmen.

Grayson Pawlenchuk had a pair of goals and Brandon Hagel scored the game-winning goal midway through the second period to lead the Red Deer Rebels over the Edmonton Oil Kings by a 7-3 score.

Serving as the season-opening game for both squads, the Rebels didn’t disappoint their home fans as the jumped out to a 2-0 lead in the first on goals from Austin Pratt and Mason McCarty.

The Rebels added to their lead in the second period as Reese Johnson scored 9:05 into the middle period before Hagel notched the game-winner four minutes later.

Andrei Pavlenko got the Oil Kings on the board with a pair of goals, scoring before the second period was finished and then opening the scoring 5:39 into the final frame.

Pawlenchuk and Davis Koch then traded goals 40 seconds apart in the middle of the period. The Rebels added late goals from Kristian Reichel and Pawlenchuk’s second of the game to put the game out of reach.

Four Rebels finished with a goal and a pair of assists, including Mason McCarty, Pratt, Hagel and Reichel. Alexander Alexeyev had three assists.

Lasse Petersen picked up the win in net for the Rebels.

The two teams meet at Rogers Place in Edmonton Sunday afternoon to complete the home-and-home series.

Ryan Chyzowki’s early second period goal ignited a three-goal effort for the Tigers in the middle period. Rookie Josh Williams notched his first of the season and Mark Rassell added another 10:41 into the frame.

Max Gerlach notched his first of the season for the lone goal of the third period as he finished with a two-point night.

Michael Bullion stopped all 22 shots he faced to answer back after taking the loss Friday in Lethbridge. Stuart Skinner made 40 saves as he took the loss on the road.

The Tigers are in Saskatoon to face the Blades next Friday while the Hurricanes travel to Edmonton to face the Oil Kings next weekend.

Hudson Elynuik contributed the game-winning goal and an assist, logging a multipoint night as the Spokane Chiefs secured a second consecutive win over the Prince George Cougars in a 5-1 decision Saturday night.

Jared Bethune opened the scoring 4:25 into the first period, giving the Cougars a 1-0 advantage. Only 28 seconds elapsed before Rykr Cole knotted the game, sending it back to square one.

Elynuik’s marker came midway through the opening period and went on to stand as the eventual game-winning tally.

Defenceman Nolan Reid unleashed a blast from the point in the second period, providing some insurance for the Chiefs. Eli Zummack and Riley Woods salted the game away with third period strikes.

Dawson Weatherill made 24 saves to earn the victory.

Kole Lind enjoyed a five-point night, factoring into every goal the Kelowna Rockets scored en route to a 5-1 victory over the rival Kamloops Blazers.

Lind, a second-round selection of the Vancouver Canucks at the 2017 NHL Draft, opened the scoring with his second goal of the season 9:16 into the first period.

The Blazers tied the game 1-1 with only 47 seconds to go in the second period as Joe Gatenby found the back of the net for his first goal of the campaign.

Then the Rockets took over the in final 20 minutes of regulation.

Jack Cowell opened the period with back-to-back goals, giving Kelowna a 3-1 lead. Then it was Lind collecting his second of the game with 4:19 to play and Cal Foote adding a power-play strike in the final minute of play to round out the scoring.

Foote finished the night with a goal and two assists.

Brodan Salmond turned aside 28 of 29 shots to earn the win.

The Victoria Royals completed a home-and-home sweep of the Vancouver Giants Saturday in Langley, B.C. with a 6-1 victory.

Dante Hannoun had a pair of goals and an assist while Jared Legien had a goal and three points in the victory as the Royals stayed perfect on the season.

Griffen Outhouse was sharp between the pipes once again, making 46 saves to pick up his second win of the season while David Tendeck took the loss for the Giants after making 26 saves.

The Royals tallied a pair of first period goals from Hannoun and Jared Freadrich. Ryan Peckford opened the scoring early in the second to give the Royals a 3-0 lead before James Malm put the Giants on the board.

Igor Martynov notched his second of the season later in the period to restore the three-goal lead for the Royals. Legien and Hannoun scored in the third for Victoria.

The Royals head back to the Island to host the Kamloops Blazers next weekend while the Giants continue a four-game homestand with games against the Blazers and Tri-City Americans.

ROYALS WIN! 2 goals in each period, & a game winner from @fready_98, powered us to a 6-1 victory over the Giants! pic.twitter.com/MlUNIeNkSB

Cody Glass and Kieffer Bellows led the offensive charge for the Portland Winterhawks Saturday as they downed the Everett Silvertips by a 7-4 score at XFINITY Arena.

The Silvertips took the lead in the first period on goals from Matt Fonteyne and Reece Vitelli, but that seemed to awaken the Winterhawks, who struck for six goals in the second period.

Bellows scored 2:43 into the second period, followed by Conor MacEachern 53 seconds later. Skyler McKenize notched his first of the season 5:14 into the period while Joachim Blichfeld and Alex Overhardt also tallied goals for Portland in the period.

In the third, Glass scored the lone Portland goal while Riley Sutter answered back for Everett. Cole Kehler made 22 saves for the victory while Dorrin Luding and Danton Belluk combined to make 23 saves.

The Winterhawks take to the ice next Saturday when they hold their home opener against the Seattle Thunderbirds. The Silvertips remain at home to face the Tri-City Americans Sunday afternoon.

The Seattle Thunderbirds raised their WHL Championship banner and claimed a 4-3 win over the Tri-City Americans Saturday night.

Defenceman Jake Lee scored 48 seconds into the third period and the first goal of his WHL career went on to stand as the game-winner.

Early in the second period a short-handed effort from Parker AuCoin put the Americans in front 3-2 before Elijah Brown knotted the affair 3-3.

Jordan Topping provided a pair of goals for the Ams, while Sami Moilanen and Zack Andrusiak also chipped in for the T-Birds.

Matt Berlin made 31 stops for the victory.

After 40 years in Seattle, the @SeattleTbirds can finally call a championship banner their own. ? pic.twitter.com/KJLQmO7MqZ