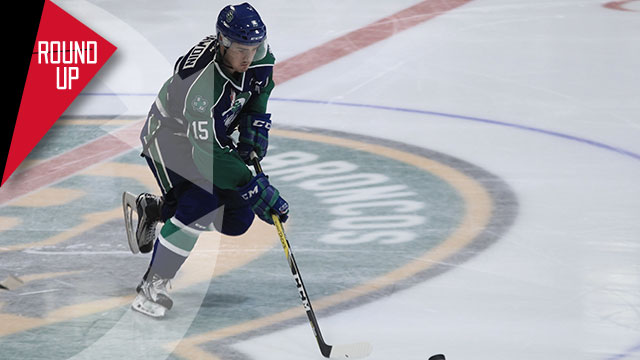 The Swift Current Broncos went into the Brandt Centre on a mission Wednesday.

The Broncos needed to play a full game, but a pair of goals and three points from Glenn Gawdin helped the Broncos edge the Regina Pats 5-3 in the lone game on the Western Hockey League schedule Wednesday.

Gawdin notched the opening goal of the game eight minutes into the first to put his side ahead after 20 minutes. He continued to gain momentum in the second, scoring on the man-advantage 3:41 into the period.

Still on the power play 40 seconds later, Tyler Steenbergen completed a beautiful passing play from Aleksi Heponiemi and Gawdin for his first of the season.

Not wanting to disappoint their home fans, Matt Bradley answered back for the Pats 6:49 into the period.

The Broncos kept coming however, with Matt Patterson dropping the puck for Colby Sissons, who blasted the one-timer past Max Paddock to restore the three-goal lead a few minutes later.

Fighting back in the third, the Pats received another goal from Bradley and the first goal of the season from Bryce Platt to bring the home side within one.

An absolute rocket from @colby_sissons from the point to restore #SCB three-goal lead! #BarDown #OurTeamOurTown

Pushing for the equalizer, the Pats continued to press, but Logan Flodell was more than equal to the task, making 34 saves for his first win with his new team. Max Paddock took the loss, making 29 saves on 33 shots.

Steenbergen would add a late goal into the empty net for his second of the game to finish with four points in the contest. Heponiemi also finished with four points, all assists, for his first points of the season.

The Broncos continue their four-game road trip to start the season Saturday when they head east to face the Brandon Wheat Kings.

For the Pats, they’re at Mosaic Play this Friday for their first meeting of the season against the Moose Jaw Warriors, which will also be the first WHL on Access broadcast of the season.