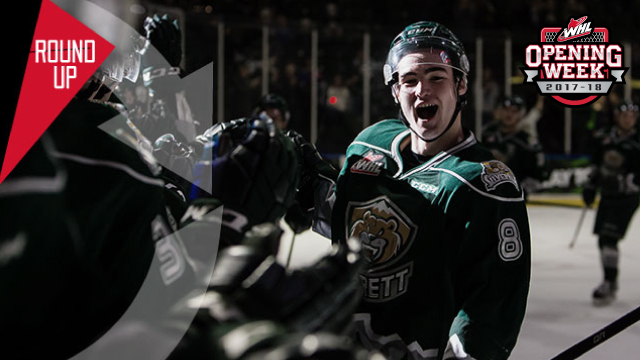 The Edmonton Oil Kings couldn’t sustain a first period lead in their home opener, falling by a 5-3 final to the Red Deer Rebels Sunday at Rogers Place.

Brandon Hagel scored a pair of goals and Mason McCarty had a two-point game while Jared Dmytriw tallied the game-winner midway through the third period on the power play.

Trey Fix-Wolansky and Kobe Mohr helped the Oil Kings jump out to a 2-0 lead in the first 4:26 before McCarty got the Rebels on the board roughly six minutes later.

Ty Gerla poked in a rebound at the front of the net midway through the second, but the Rebels kept coming. Hagel notched his first of the game late in the second and Reese Johnson fired home a bouncing puck off a play 49 seconds into the third to tie up the game. After Dmytriw’s game-winner, Hagel scored his second of the game into the empty-net to send the Rebels to a weekend sweep of the Oil Kings.

Lasse Petersen picked up the win for the second time in as many days, making 18 saves while Travis Child took the loss while making 27 saves.

Reese Johnson finishes off a beautiful play as the @Rebelshockey tie up the game early in the third. #WHLOpeningWeek pic.twitter.com/9jfix2vPMs

In a battle of two team’s searching for their first win of the season, Patrick Bajkov was the difference Sunday afternoon at XFINITY Arena in Everett, Wash.

Bajkov had a pair of goals and Dorrin Luding was sharp in net with 42 saves to deliver the team its first victory of the season.

Riley Sutter opened the scoring 7:40 into the first and Bajkov scored his first of the night with roughly seven minutes remaining in the period to give the Tips a 2-0 lead after 20 minutes.

The Americans got back into the game with a power play goal as Maxwell James tipped a shot from Dylan Coghlan on the man-advantage, cutting the lead to one.

Bajkov would tally his second of the night following a nice pass from Matt Fontyene to restore the two-goal lead before the period was done. Sean Richards added his first of the season in the third as the only goal in the frame.

The @WHLsilvertips are up 2-0 after 20 minutes thanks to goals from Riley Sutter and this one from @patrickbajkov.#WHLOpeningWeek pic.twitter.com/igbqfBBfcJ