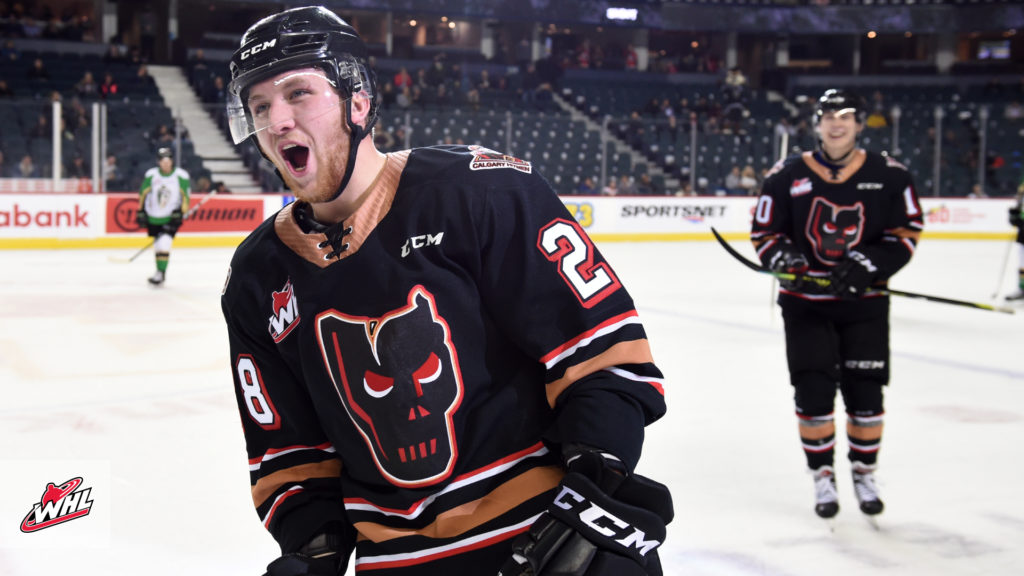 A five-game schedule of action took place across the Western Hockey League Wednesday. In Winnipeg, the ICE scored a pair of late goals to top the visiting Red Deer Rebels. In southern Alberta, the Lethbridge Hurricanes received another strong effort by D-Jay Jerome to top the Swift Current Broncos. In the Stampede City, Orca Wiesblatt scored twice to lead a come-from-behind victory for the Calgary Hitmen against the Prince Albert Raiders. In British Columbia, the Victoria Royals left Prospera Place with a pair of points after a win against the Kelowna Rockets. In northern B.C., the Medicine Hat Tigers held on for a tight victory after a five-goal second period against the Prince George Cougars. 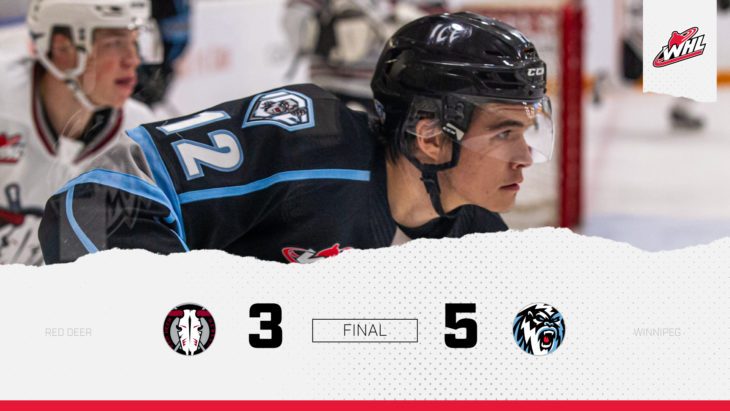 Goals 64 seconds apart from Michal Teply (Chicago Blackhawks) and Brad Ginnell broke open a 3-3 tie late in the third as the Winnipeg ICE earned a 5-3 win Wednesday over the Red Deer Rebels.

The ICE never trailed in Wednesday’s contest as Nino Kinder opened the scoring in the first and Ginnell scored a buzzer-beating goal to give the home side a 2-0 lead after 20 minutes. Ethan Sakowich put the Rebels on the board in the second, but Mike Ladyman’s first-ever WHL goal restored the two-goal advantage after 40 minutes.

Pushing in the third, Brett Davis and Jaxsen Wiebe scored to tie the game up. However, the ICE would have the last laugh with the late goals to win by the two-goal margin. Kinder and Teply each finished with a goal and three points. Dean McNabb stopped 24 of 27 shots for the victory. 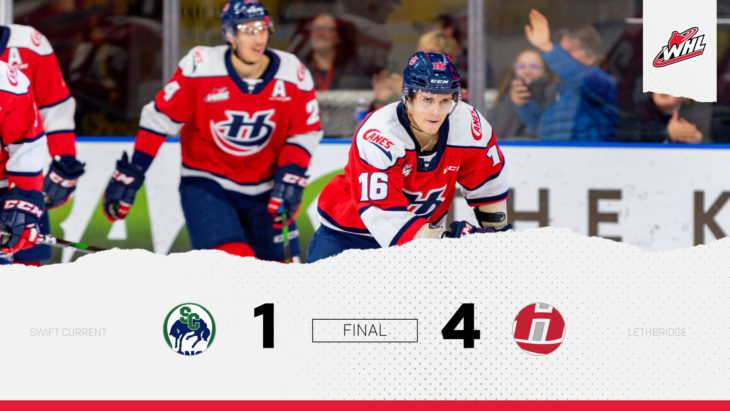 A three-point effort from D-Jay Jerome powered the Lethbridge Hurricanes to a 4-1 win over the Swift Current Broncos on home ice Wednesday night.

Jerome scored the first and third goals of the game as part of a three-goal second period for the Hurricanes. Logan Barlage scored his third goal of the season in between the goals from Jerome to earn the game-winning goal in the contest.

The Broncos got on the board in the third thanks to Matthew Culling, but a late strike from Dylan Cozens (Buffalo Sabres) kept the Hurricanes’ advantage at three for the rest of the game.

Carl Tetachuk took the win with 20 saves on 21 shots. Oliver Okuliar saw his goal streak end, but still recorded a pair of assists to extend his point streak to nine games. 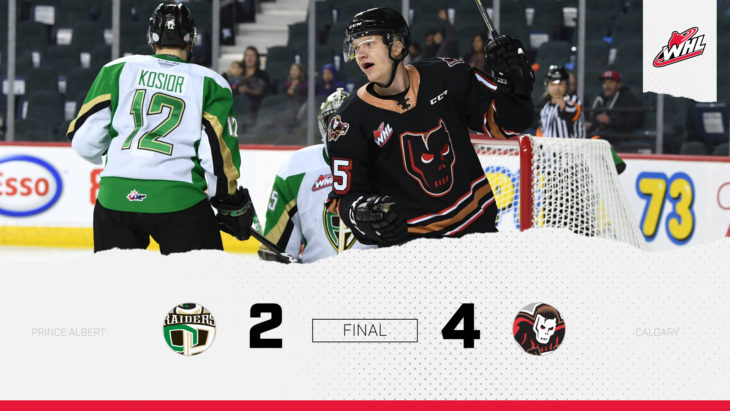 Orca Wiesblatt scored twice as the Calgary Hitmen doubled up the visiting Prince Albert Raiders by a 4-2 score Wednesday in the Stampede City.

Jonas Peterek and Spencer Moe traded goals in the first period to keep the score even. A second-period goal by Evan Herman then put the Raiders up by a single goal heading to the final period of play.

However, the third is where the Hitmen would erupt for three unanswered goals to earn the come-from-behind victory. Wiesblatt scored his first of the game 5:08 into the final period. With 1:22 left in regulation, Wiesblatt buried the rebound opportunity off a Josh Prokop shot to put the Hitmen ahead for good. Egor Zamula (Philadelphia Flyers) added an empty-net goal to complete the victory.

Brayden Peters ended up with the win in the game, stopping 26 of 28 shots in the contest. Prokop ended up with a pair of helpers in the win. 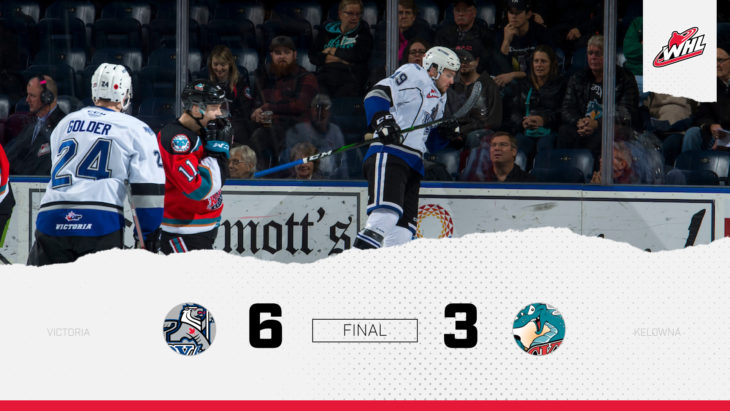 The Victoria Royals waltzed out of Prospera Place with two points Wednesday thanks to a 6-3 win against the Kelowna Rockets.

Six different Royals scored in the victory, starting with Keanu Derungs, Ty Yoder, and River Fahey, who all struck in the first period. 2020 NHL Draft prospect Pavel Novak and teammate Jake Poole responded for the Rockets to keep them within a goal after 20 minutes.

Alex Swetlikoff brought the Rockets even in the second, but Mitchell Prowse and Sean Gulka would score to extend the Royals’ lead to two after 40 minutes. Tarun Fizer closed out the game with his seventh goal of the season in the third.

Kaid Oliver added three helpers in the victory while 2020 NHL Draft prospect Brock Gould stopped 27 of 30 shots for the victory in net. 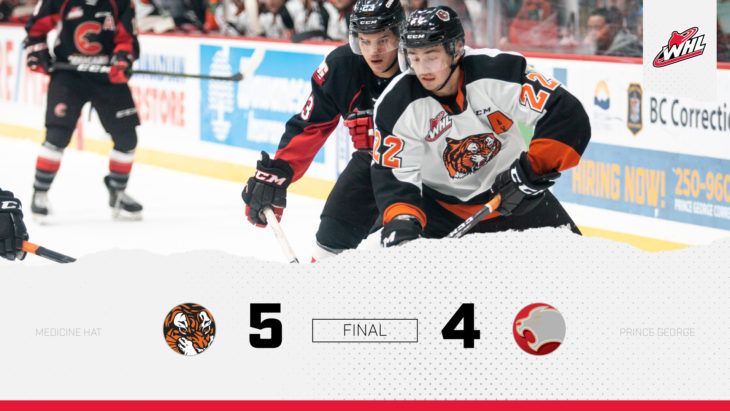 The Medicine Hat Tigers scored five consecutive goals in the second period and held on for a 5-4 win against the Prince George Cougars in northern British Columbia Wednesday.

Mitchell Kohner scored the only goal of the first period and Cole Moberg (Chicago Blackhawks) struck 51 seconds into the middle period to give the home side a 2-0 lead.

For the rest of the period, it was all Medicine Hat though as captain James Hamblin scored twice, while Tyler Preziuso, Brett Kemp, and Baxter Anderson also found the back of the net to count up five goals in an 8:44 span.

The Cougars attempted a comeback in the third with goals from Moberg and Jack Sander, but it wasn’t enough to pull them even.