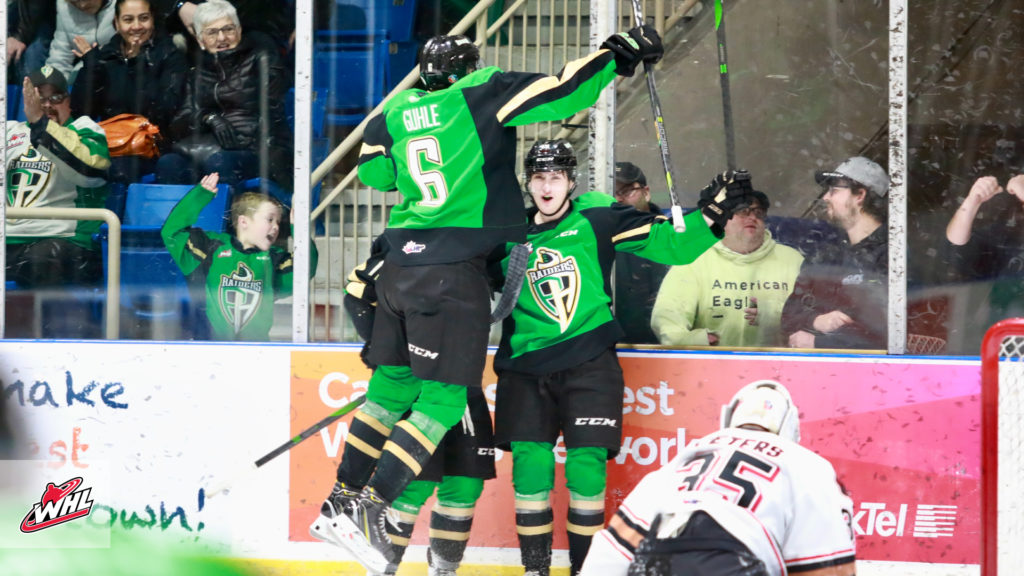 A six-game schedule produced plenty of action in the Western Hockey League Sunday. In Saskatchewan, the Saskatoon Blades shutout the Moose Jaw Warriors as part of CHL on Sportsnet action. Just up the road, the Prince Albert Raiders scored an overtime victory against the Calgary Hitmen with a late comeback. In Alberta’s capital, the Brandon Wheat Kings coughed up a 4-0 lead, but hung on for the extra point in the shootout against the Edmonton Oil Kings. The Lethbridge Hurricanes found success on the second stop of their B.C. Division road trip, shutting out the Vancouver Giants. South of the 49th parallel, goaltenders continued to be stingy as the Everett Silvertips blanked the Spokane Chiefs and the Portland Winterhawks came within a few minutes of shutting out the visiting Winnipeg ICE. 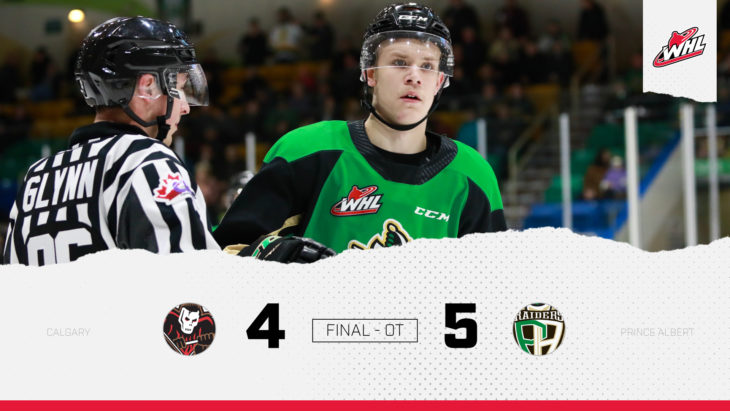 2020 NHL draft prospect Ozzy Wiesblatt scored late in regulation to tie up the game and then again in overtime as the Prince Albert Raiders earned a 5-4 victory against the visiting Calgary Hitmen Sunday.

Another 2020 NHL Draft prospect in Kaiden Guhle opened the scoring, but Blake Allan notched a short-handed goal for Calgary late in the period to keep the teams tied through 20 minutes.

Brayden Watts had the lone goal of the second to put the Raiders ahead by one after 40.

Riley Stotts (Toronto Maple Leafs) scored early in the third to once again tie things up, but Watts then struck again to put the Raiders up by one. This time, the Hitmen responded with goals from Adam Kydd and Josh Prokop to put the visitors in front.

That’s where Wiesblatt would step in with the late goal to tie up the game and the game-winning goal on a feed in overtime from Spencer Moe to claim the second point. Boston Bilous made 15 saves in the narrow victory. 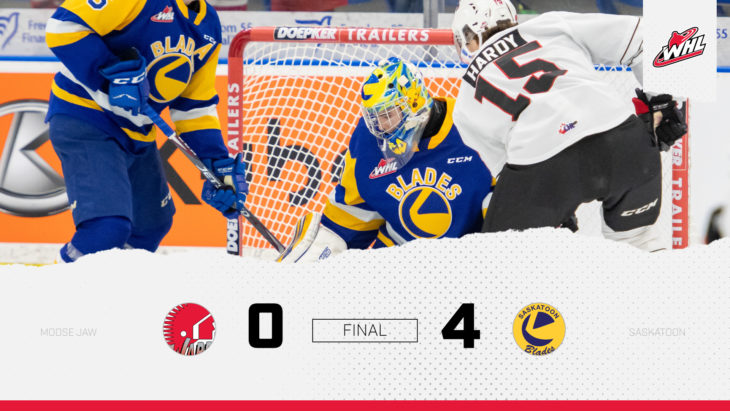 In CHL on Sportsnet action, Saskatoon Blades goaltender Koen MacInnes recorded the first shutout of his WHL career with a 20-save performance in a 4-0 blanking of the Moose Jaw Warriors.

Adam Evanoff stopped 45 of 48 shots for the Warriors in the loss. 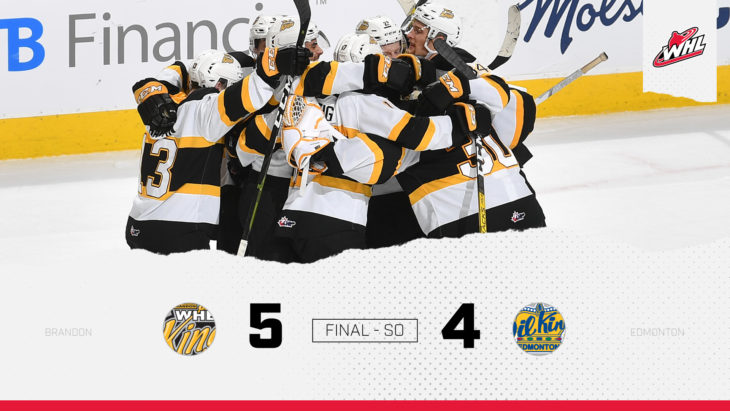 The Brandon Wheat Kings didn’t make it easy on themselves, but still earned two points in a 5-4 shootout win against the Edmonton Oil Kings Sunday.

Leading 4-0 exactly halfway through regulation, Brandon coughed up the lead before refocusing for the shootout.

In regulation, the Wheaties received a pair of goals from Cole Reinhardt as well as strikes from Lynden McCallum and 2020 NHL Draft prospect Ben McCartney. As the Oil Kings roared back in the contest, the team received goals from David Kope, Vladimir Alistrov, Dylan Guenther, and Loeden Schaufler.

Sherwood Park, Alta. product Ethan Kruger stopped 30 of 34 shots through regulation and overtime, then conceded just a single goal in the three-round shootout. 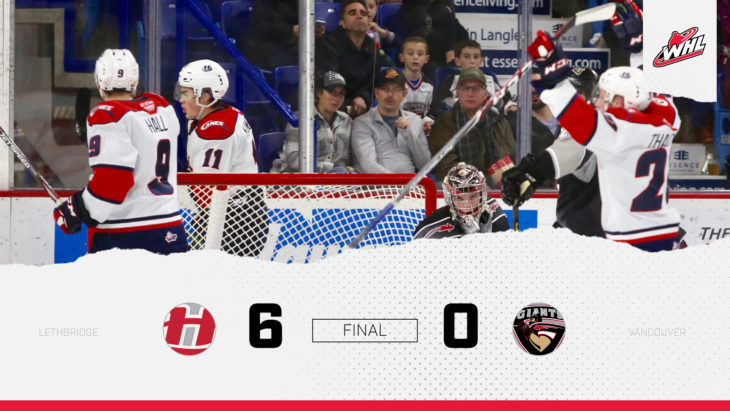 The Lethbridge Hurricanes rolled to a 6-0 win against the Vancouver Giants Sunday thanks to a 17-save shutout from Carl Tetachuk and goals from six different skaters.

In net, Tetachuk stopped five shots in the first, six in the second, and six more in the third for the fourth shutout of his WHL career.

After a scoreless first, Zack Stringer, Jett Jones, and Dino Kambeitz scored for Lethbridge in the second. In the third, Oliver Okuliar, Logan Barlage, and 2020 NHL Draft prospect Noah Boyko also found the back of the net.

Calen Addison (Pittsburgh Penguins) and Justin Hall each collected a pair of assists in the win. 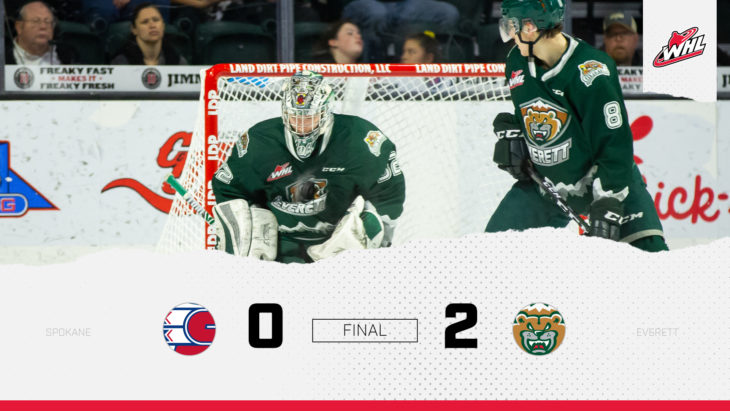 Dustin Wolf (Calgary Flames) stopped all 22 shots sent his way for the 14th shutout of his WHL career in a 2-0 win for the Everett Silvertips against the Spokane Chiefs Sunday.

Everett’s defence provided both goals in the win as Wyatte Wylie (Philadelphia Flyers) scored in the second and Gianni Fairbrother (Montreal Canadiens) added an empty-net goal.

Wolf faced five shots in the first, five in the second, and 12 in the third, turning them all aside.

Campbell Arnold stopped 25 of 26 shots for Spokane in the loss. 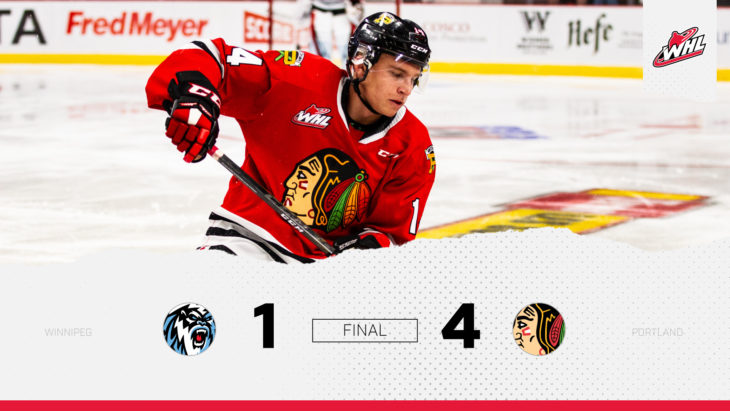 The Portland Winterhawks remained tough to beat on home ice Sunday, downing the visiting Winnipeg ICE by a 4-1 final.

Joel Hofer (St. Louis Blues) stopped 33 of 34 shots and came within a few minutes of the clean sheet to lead Portland.

Michal Teply’s (Chicago Blackhawks) eight goal of the season was the lone strike for Winnipeg. Captain Peyton Krebs (Vegas Golden Knights) made his season debut for Winnipeg and had the primary assist on their lone goal.