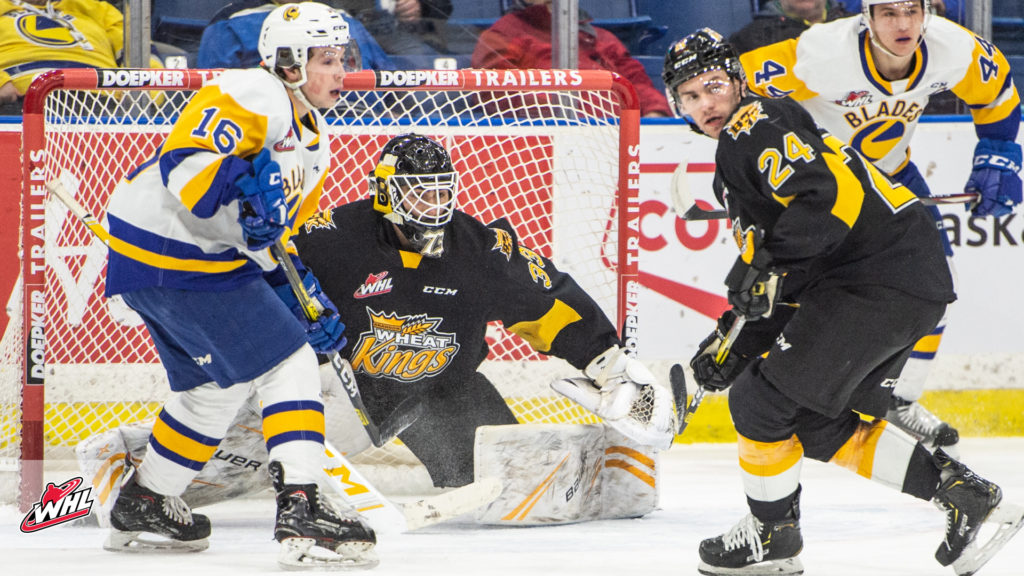 Wednesday’s Western Hockey League action saw six games feature on the schedule. The Brandon Wheat Kings topped the Saskatoon Blades to open a home-and-home series. The Winnipeg ICE began a trip into the Central Division with a triumph against the Swift Current Broncos. A four-goal night by captain Mark Kastelic powered the Calgary Hitmen to a win against the Regina Pats. The Kelowna Rockets put up an eight-goal effort against the Tri-City Americans thanks to a hat trick from Matthew Wedman. In British Columbia’s Lower Mainland, the Vancouver Giants used four third-period goals to down the Red Deer Rebels in a rare meeting. In Spokane, Brock Gould delivered a mammoth 57-save effort, but the Spokane Chiefs prevailed over the Moose Jaw Warriors in overtime. 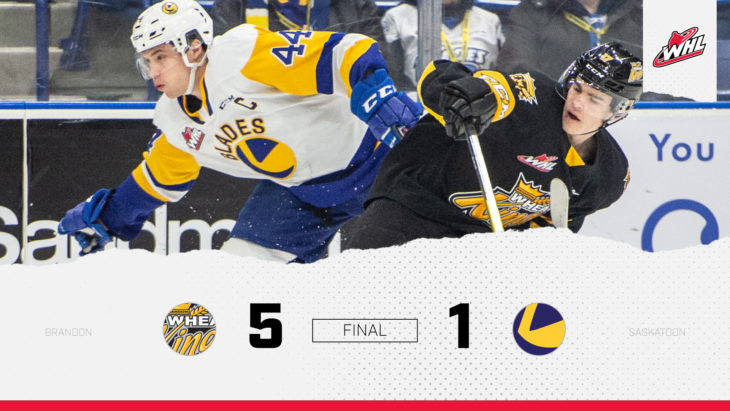 Cole Reinhardt and 2020 NHL Draft prospect Braden Schneider scored in the first. Captain Connor Gutenberg and Greig’s first of the night featured in the second to build the lead to four.

Nolan Kneen put the Blades on the board 105 seconds into the third, but Greig’s second of the night midway through the frame kept the difference at four for the rest of regulation.

Gutenberg added three helpers for a four-point night. Between the pipes, Jiri Patera (Vegas Golden Knights) made 22 saves on 23 shots for the victory. 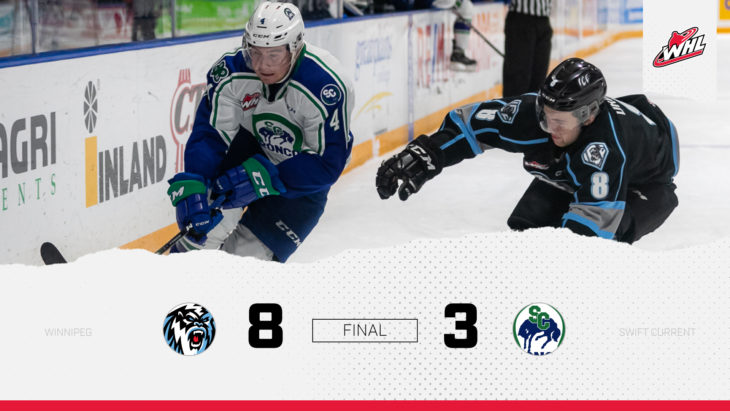 2020 NHL Draft prospect Owen Pederson scored twice as part of a three-point night as the Winnipeg ICE topped the Swift Current Broncos by an 8-3 score.

Goals from Nolan Orzeck and Pederson featured in the first while Broncos captain Jaxan Kaluski struck for the Broncos.

Isaac Johnson, Pederson’s second of the game, and a strike from 2020 NHL Draft prospect Ben Zloty featured for the ICE in the second. Looking to keep pace, Matthew Benson and Hayden Ostir scored for the Broncos.

The ICE closed out the win in the third with goals by James Form, Michal Teply (Chicago Blackhawks), and Cole Muir.

Liam Hughes made 19 saves for the victory. 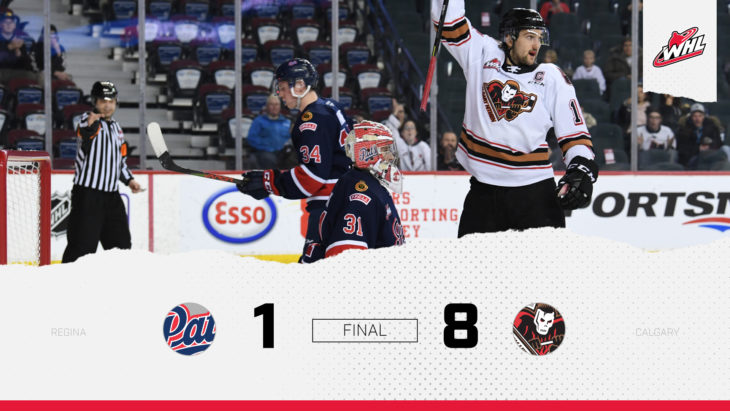 Captain Mark Kastelic tallied a career-high four goals and five points as the Calgary Hitmen rode a wave of offence to an 8-1 victory against the Regina Pats.

As part of a four-goal first period by the Hitmen, Kastelic opened the scoring 10 seconds into the game and had a hat trick 9:58 into the contest. Kyle Olson had the other goal to complete the scoring in the opening period.

Kastelic scored his fourth goal of the game 4:30 into the second, followed by a pair of goals from Carson Focht (Vancouver Canucks) and Olson’s second of the night.

Pats forward Cole Dubinsky broke up the shutout late in the second period.

Brayden Peters made 13 saves for the victory. 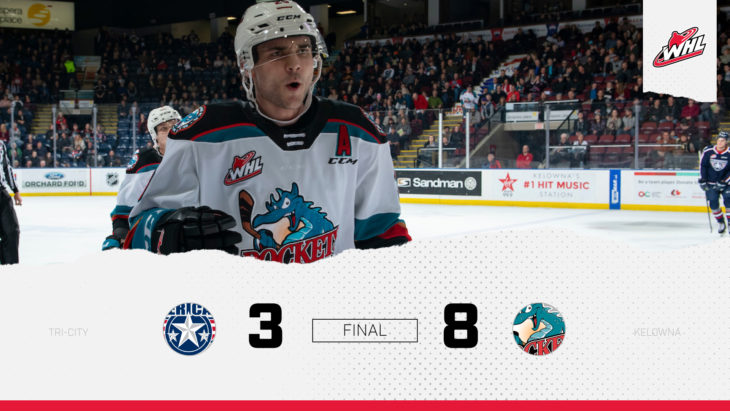 A hat trick from Matthew Wedman (Florida Panthers) and a five-point night from 2020 NHL Draft prospect Pavel Novak guided the Kelowna Rockets to an 8-3 victory against the Tri-City Americans.

After Edge Lambert opened the scoring in favour of the Americans, Novak and Wedman struck to give the Rockets a 2-1 lead through 20 minutes.

The Rockets owned the second period with goals by Dillon Hamaliuk (San Jose Sharks), Kyle Topping, and Wedman’s second of the game to turn it into a 5-1 contest through 40 minutes.

Connor Bouchard and the first goal of Tyson Greenway’s WHL career would count for the Americans in the third, but Wedman’s hat-trick goal, Tyson Feist’s first WHL goal, and Mark Liwiski’s seventh of the season properly closed out the victory.

Roman Basran made 24 saves for the win. 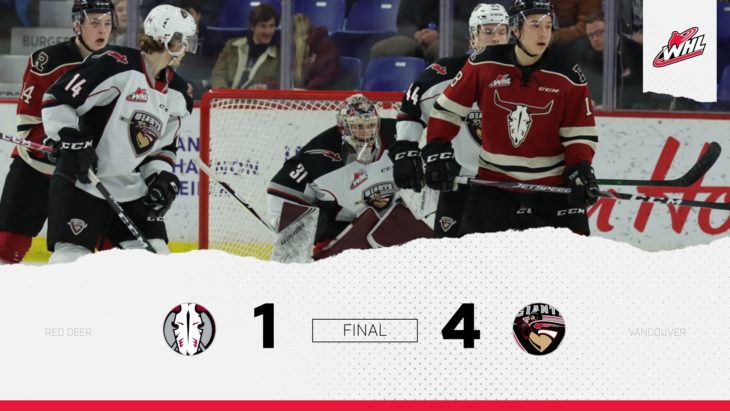 The Vancouver Giants reeled off four unanswered goals in the third period Wednesday, topping the visiting Red Deer Rebels by a 4-1 score.

Trent Miner (Colorado Avalanche) made 23 saves for the win. 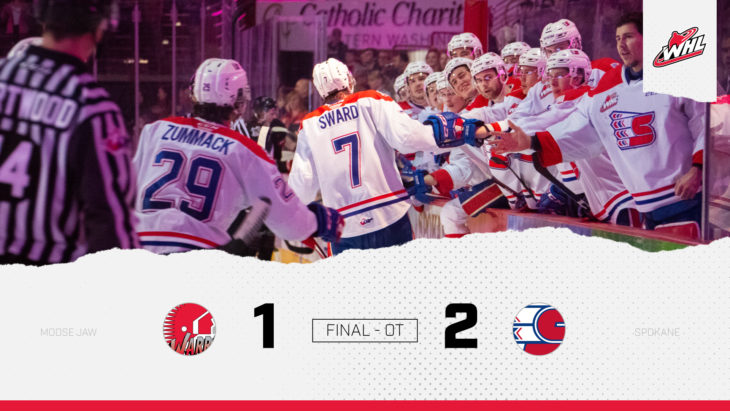 2020 NHL Draft prospect Brock Gould delivered a mammoth 57-save effort for the Moose Jaw Warriors, but the Spokane Chiefs found a way to top the visitors 2-1 in overtime.

Chase Hartje scored in the first and Graham Sward struck in the second for the lone goals through regulation. Gould was kept busy throughout all three periods, making 24 saves in the first, 19 in the second, and 14 in the third.

Just 34 seconds into overtime, the Chiefs found the winning goal as Eli Zummack ripped a shot from the high slot past Gould to earn the extra point.

James Porter Jr. earned the win with 17 saves on 18 shots.