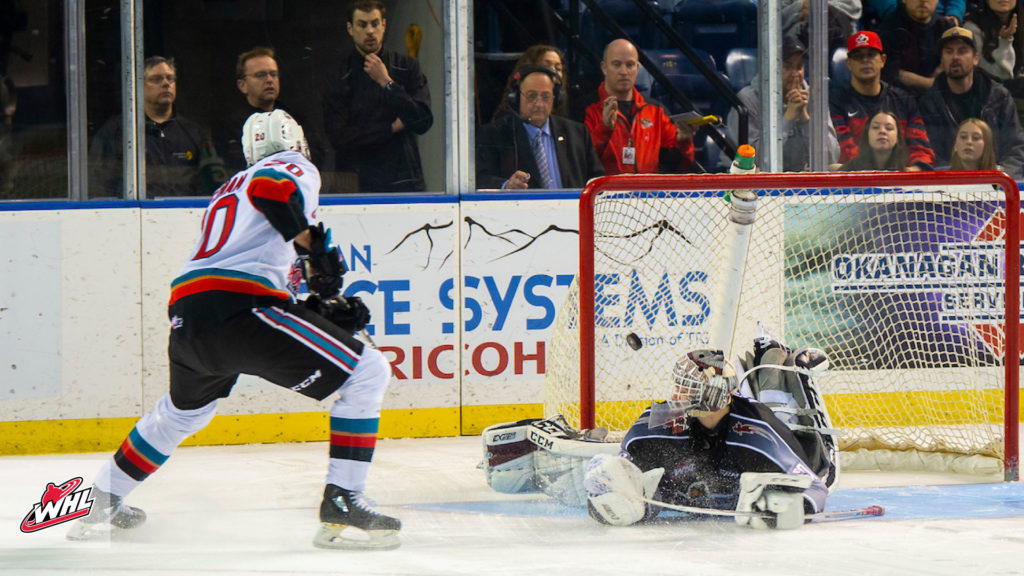 A nine-game schedule of action across the Western Hockey league saw three teams require extra time to earn their wins with a goal explosion and a stifling performance between the pipes. The Winnipeg ICE earned another home win in the lone Manitoban game and the Swift Current Broncos completed a sweep of a home-and-home set with a win in the provincial capital for the lone game in Saskatchewan. The Warriors were aided by an epic performance in net to win in central Alberta while the Medicine Hat Tigers came out on the right side of a 13-goal contest. In the southern part of the province, the Calgary Hitmen earned an electrifying overtime win in Lethbridge. The Kelowna Rockets and Kamloops Blazers defended home turf in wins against divisional opponents. In another night of U.S. Division competition, the Portland Winterhawks won at home and the Everett Silvertips won on the road. 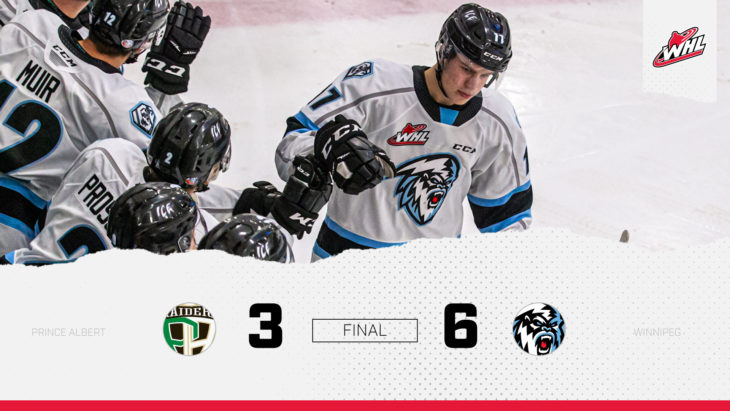 The Winnipeg ICE received two-goal performances from Owen Pederson and Jackson Leppard to fuel a 6-3 win against the Prince Albert Raiders on home ice Saturday.

Pederson scored his pair in the first while Leppard scored his as part of a three-goal third period that made the difference in the contest. 2020 NHL Draft prospect Connor McClennon and Isaac Johnson each tallied three-point nights in the win.

Liam Hughes made 25 saves for the win. 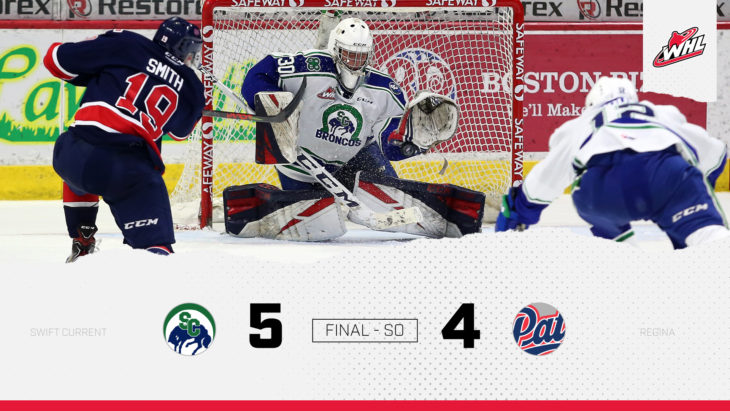 Captain Ethan Regnier scored the only goal in the shootout and the Swift Current Broncos swept a home-and-home series against the Regina Pats with a 5-4 victory in the Queen City Saturday.

The Pats opened the game with a pair of Carson Denomie goals in the first period, but the Broncos responded in the second from the sticks of Eric Houk and Garrett Sambrook to tie the game up through 40 minutes. Kye Buchanan’s first WHL goal and a strike from Regnier put the visitors up 4-2 in the third, but Regina responded with goals from Drew Englot and Zach Wytinck to force extra time.

Reece Klassen stood strong in the game, making 36 saves through 65 minutes, then refusing to allow a goal on three shootout attempts. 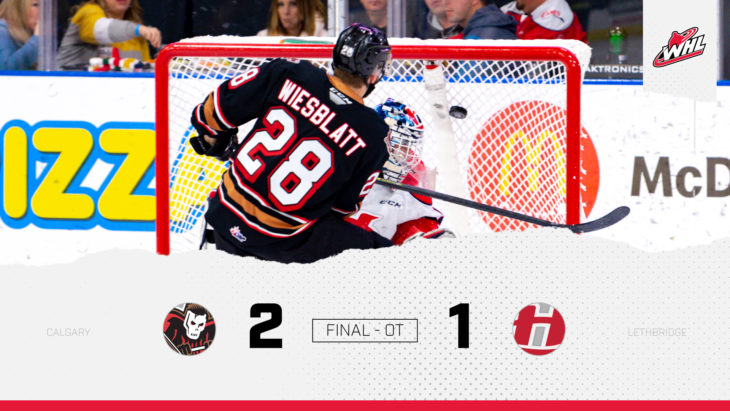 Captain Mark Kastelic (Ottawa Senators) scored his 20th goal of the season 18 seconds into overtime Saturday, lifting the Calgary Hitmen to a 2-1 road win against the Lethbridge Hurricanes.

Justin Hall opened the scoring in favour of the home side with 7:20 left in the first period, but Orca Wiesblatt evened up the game on his 13th of the campaign before the first intermission.

In addition to make 27 saves for the win, goaltender Brayden Peters picked up an assist on Wiesblatt’s goal. 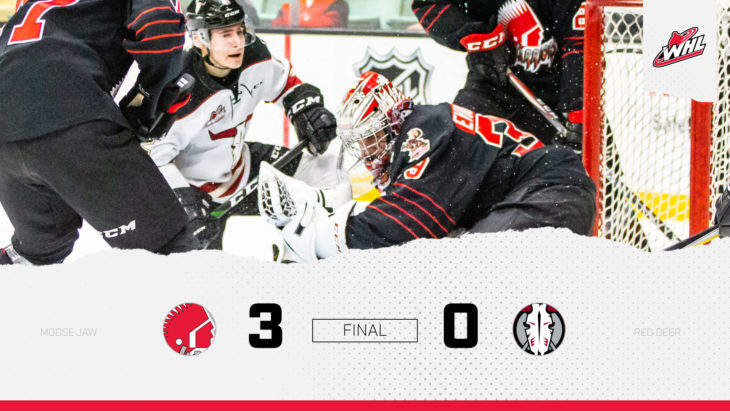 A 46-save shutout from Adam Evanoff powered the Moose Jaw Warriors to a 3-0 win against the Red Deer Rebels Saturday night in central Alberta.

Evanoff stopped 14 shots in the first, 14 in the second, and 18 in the third for the second shutout of his WHL career.

Offensively, the first goal of the game didn’t come until the third period when Ryder Korczak struck 26 seconds into the frame. Tate Popple then scored a pair of goals to swell the lead by the end of regulation. 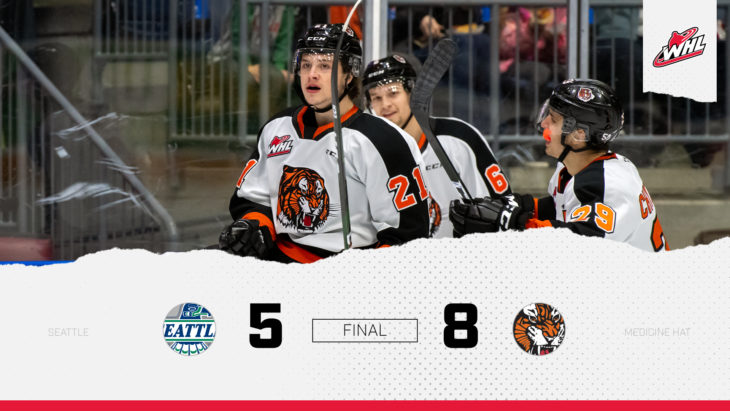 The Medicine Hat Tigers erupted for another strong offensive showing Saturday in an 8-5 win against the visiting Seattle Thunderbirds.

Brett Kemp led the way with a pair of goals and four points while captain James Hamblin and defenceman Dylan Plouffe each posted a pair of goals. Also finding the back of the net for the Tigers were Nick McCarry and Cole Sillinger as the Tigers scored three times in the first, twice in the second, and three more times in the third.

Seattle’s offence was powered by a hat trick from Andrej Kukuca. Picking up a goal and an assist each were Henrik Rybinski (Florida Panthers) and Conner Roulette. 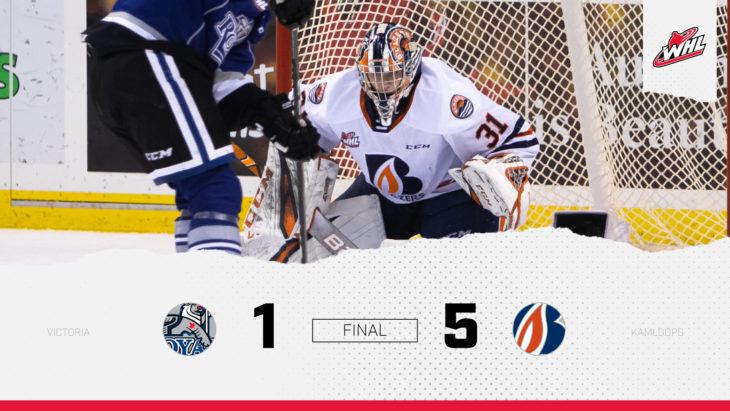 A three-point night by Logan Stankoven and a 17-save performance by 2020 NHL Draft prospect Dylan Garand paced the Kamloops Blazers to a 5-1 win against the Victoria Royals.

Goals by Stankoven and Orrin Centazzo bookended a strike by Sean Gulka to make it a 2-1 game through 20 minutes. Though that’d be more than enough offence to win Saturday, the Blazers added extra insurance via the sticks of Inaki Baragano, captain Zane Franklin, and Ryley Appelt. 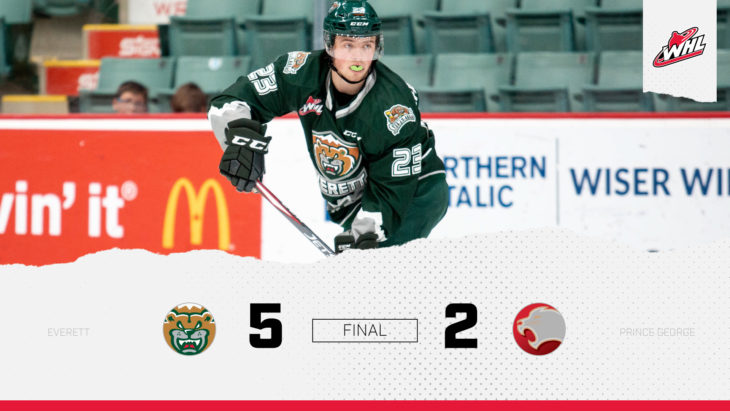 The Everett Silvertips earned a weekend split against the Prince George Cougars via a 5-2 victory Saturday.

Everett’s defence provided both goals in the first period as 2020 NHL Draft prospect Ronan Seeley and Jake Christiansen both found the back of the net. Nikita Krivokrasov got the Cougars on the board in the second, but goals from Cole Fonstad (Montreal Canadiens) and Jackson Berezowski put them up 4-1 through 40 minutes.

The Cougars were unable to gain ground in the third as Conrad Mitchell and Jack Sander traded goals.

Earning the first win of his WHL career, Braden Holt stopped 19 of 21 shots. 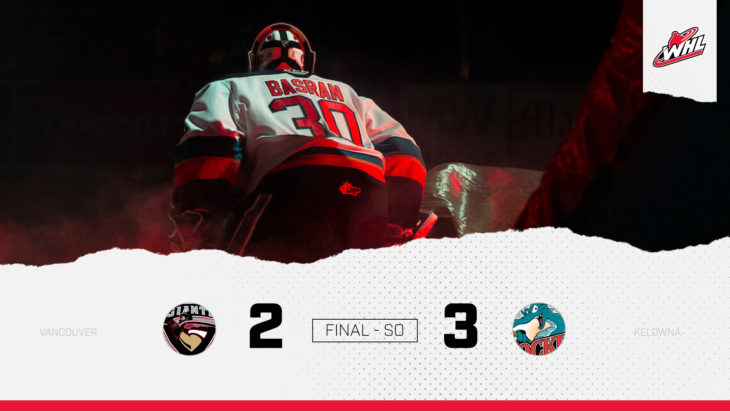 Matthew Wedman (Florida Panthers) and Conner McDonald scored in the shootout Saturday as the Kelowna Rockets topped the Vancouver Giants by a 3-2 score.

Each team struck once in the first and third periods. Liam Kindree and 2020 NHL Draft prospect Pavel Novak scored for the Rockets while Holden Katzalay’s first WHL goal and a strike from Tristen Nielsen featured for the Giants. 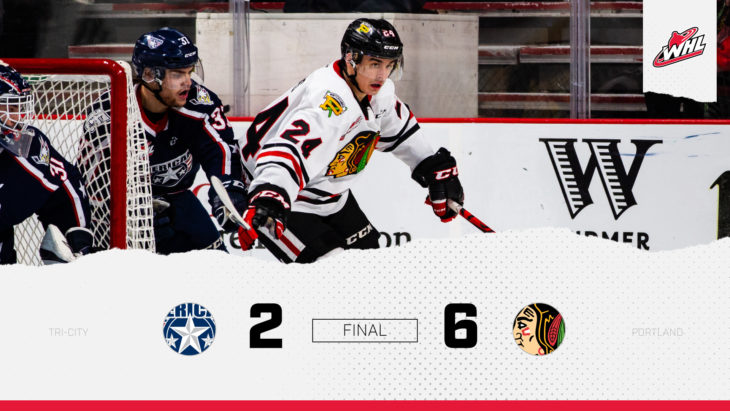 2020 NHL Draft prospect Seth Jarvis recorded the first hat trick of his WHL career Saturday as the Portland Winterhawks tripled the Tri-City Americans by a 6-2 score.

Krystof Hrabik opened the scoring, but goals from Jake Gricius and Jarvis’ first featured later in the opening period to make a 2-1 game through 20 minutes. James Stefan and Lane Gilliss added goals in the middle period to make it a 4-1 game, leaving Jarvis to add the last two in the third.

Gilliss and Gricius each finished with multi-point games, adding an assist to their respective goals. Kishaun Gervais contributed a pair of assists in the win.

Between the pipes, the Winterhawks received another apt performance from Dante Giannuzzi, who stopped 27 of 29 shots to earn the victory.