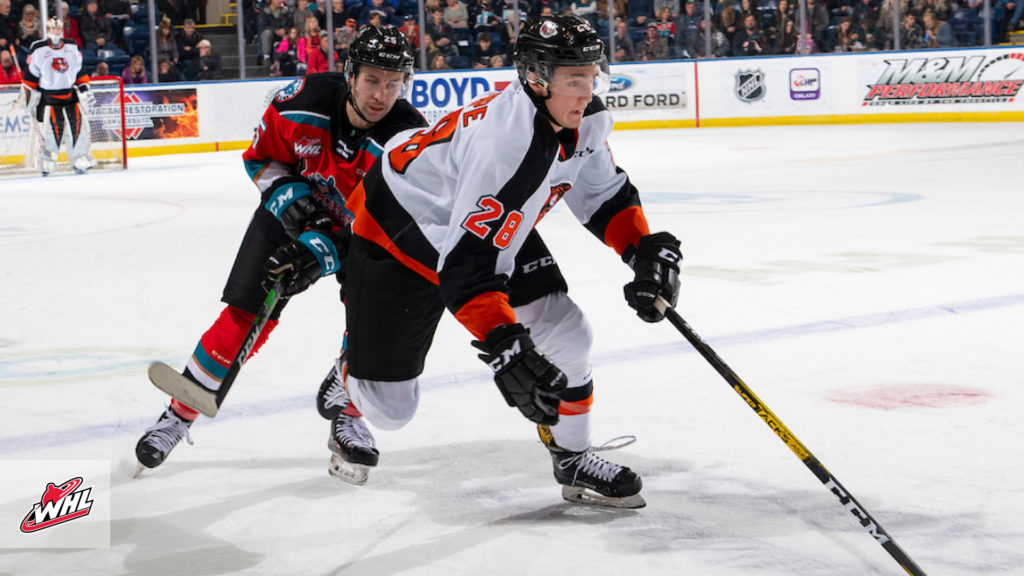 A busy 10-game schedule of action saw high-scoring games, an incredible comeback, and plenty more across the Western Hockey League Friday. In Saskatchewan, the Prince Albert Raiders, Saskatoon Blades, and Moose Jaw Warriors emerged victorious from their Friday games. In Alberta, the Lethbridge Hurricanes took over first place in the division following an intense come-from-behind shootout victory. In Calgary, the Tri-City Americans also used a shootout to earn their victory. In British Columbia, the Vancouver Giants, Medicine Hat Tigers, and Victoria Royals all ended the evening with two extra points. South of the 49th parallel, the Everett Silvertips and Kamloops Blazers continued their winning ways. 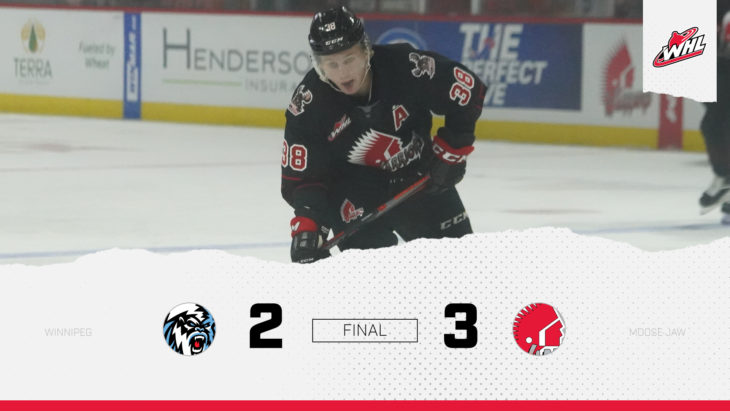 The Moose Jaw Warriors began their weekend on the right foot with a 3-2 defeat of the Winnipeg ICE at Mosaic Place.

Carson Denomie had the lone goal of the first and Alex Sekunda doubled the Warriors’ lead in the second. Michal Teply (Chicago Blackhawks) got the ICE on the board late in the middle period, but Cory King struck 5:31 into the third to restore the two-goal advantage. 2020 NHL Draft prospect Connor McClennon scored late in regulation to bring Winnipeg within a goal.

Adam Evanoff stopped 36 of 38 shots for the victory. 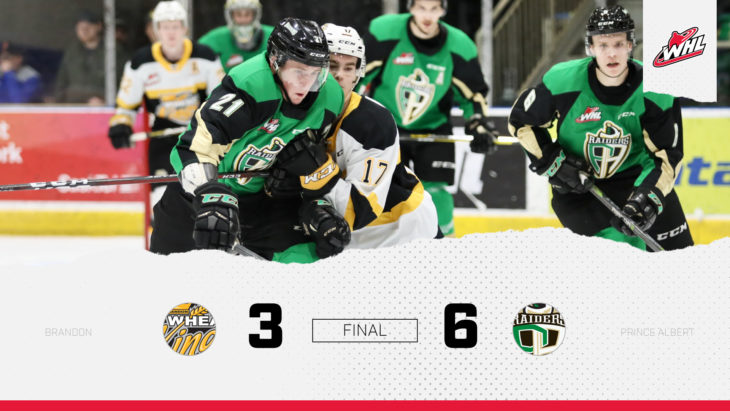 A four-goal first period guided the Prince Albert Raiders to a 6-3 win against the visiting Brandon Wheat Kings.

Goals from captain Zack Hayes, Evan Herman, Brayden Watts, and Jakob Brook put the Raiders up in the first period while Nolan Ritchie and Luka Burzan (Colorado Avalanche) responded for the Wheaties.

Burzan’s second of the game would bring the Wheat Kings within a goal after 40 minutes, but that’s as close as they’d come as Eric Pearce and Ozzy Wiesblatt rounded out the scoring in the third.

Boston Bilous stopped 19 of 22 shots for the victory. 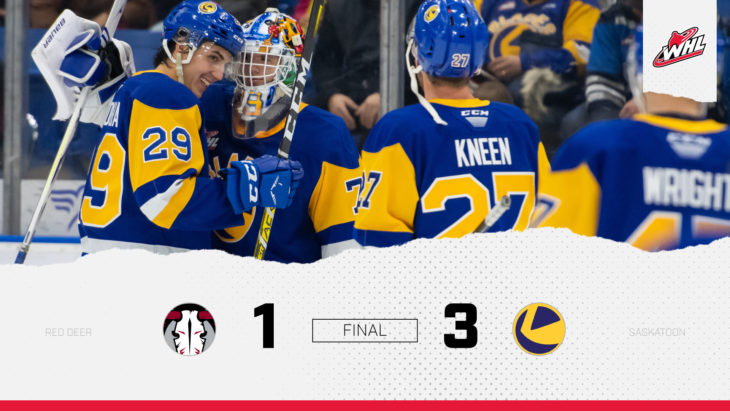 A 28-save performance from Nolan Maier was aided by a pair of second period goals to give the Saskatoon Blades a 3-1 victory against the Red Deer Rebels.

Goals from Radek Kucerik and Dallon Melin featured in the opening period. In the second, Kyle Crnkovic and Eric Florchuk (Washington Capitals) scored four minutes apart to provide the difference in the contest.

Matej Toman picked up an assist in his debut with the Blades. 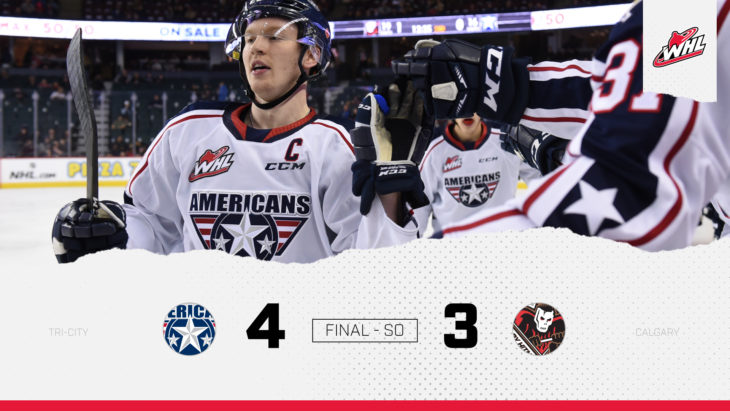 Egor Zamula (Philadelphia Flyers) had the only goal of the first, but Americans captain Kyle Olson had the lone goal of the second to tie up the game after 40 minutes.

The teams then each struck twice in the third as goals by Hitmen captain Mark Kastelic (Ottawa Senators) and Focht were bookended by goals from Nick Bowman and Connor Bouchard. 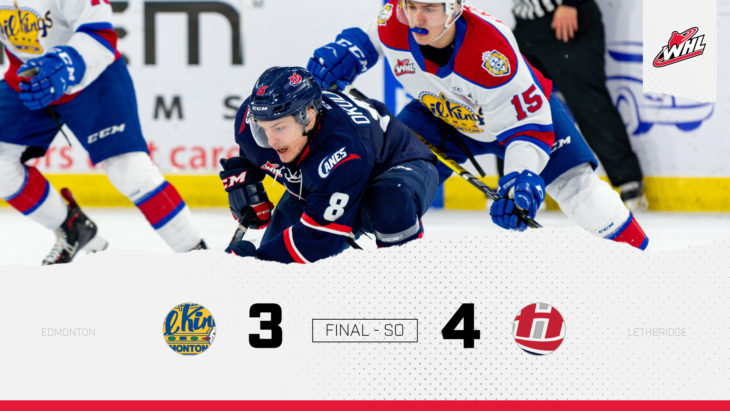 All the way back! Down 3-0 entering the third period, the Lethbridge Hurricanes reeled off three goals to force extra time and then completed the comeback in a shootout against the Edmonton Oil Kings.

Goals from captain Scott Atkinson and Liam Keeler had the Oil Kings up 2-0 after 20 minutes and Riley Sawchuk swelled the lead to three after 40. In the third, Oliver Okuliar, Dylan Cozens (Buffalo Sabres), and Alex Cotton all found the back of the net for the home side to prolong the contest.

D-Jay Jerome scored the only goal from the four-round contest after 65 minutes solved nothing.

Carl Tetachuk stopped 32 of 35 shots through 65 minutes, then didn’t allow a single goal on four Edmonton attempts in the shootout. 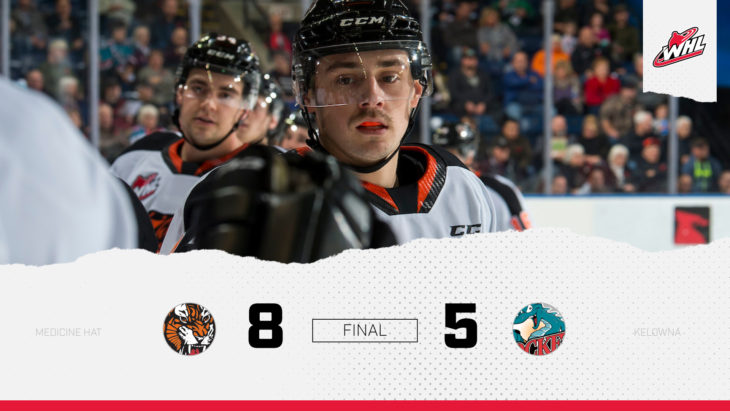 The Medicine Hat Tigers erupted offensively in an 8-5 win against the Kelowna Rockets Friday at Prospera Place.

Kobe Mohr scored his first goal for the Rockets in the first while strikes from Alex Swetlikoff, Michael Farren, and Leif Mattson featured in the second kept the Rockets within one after 40 minutes. Mattson added his second of the game in the third, but that’d be the lone source of offence for the home side in the final period of regulation.

Mads Søgaard (Ottawa Senators) stopped 28 of 33 shots for the win. 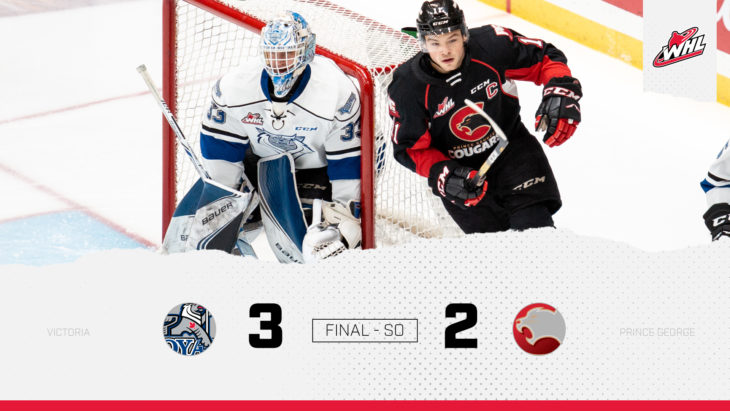 The Victoria Royals secured a 3-2 win in the shootout to survive a late comeback by the Prince George Cougars Friday.

With the game tied 0-0 after 40 minutes, the Royals received goals from Kaid Oliver and Phillip Schultz to take a 2-0 lead with 3:49 left in regulation. However, the Cougars struck twice with the goaltender pulled as captain Josh Maser and Connor Bowie forced the game into extra time.

In the shootout, Oliver scored in the third round to keep the Royals alive and Tarun Fizer won it in the following round.

2020 NHL Draft prospect Brock Gould stopped 20 of 22 shots in 65 minutes, then allowed just a single goal on four chances by the Cougars in the shootout. 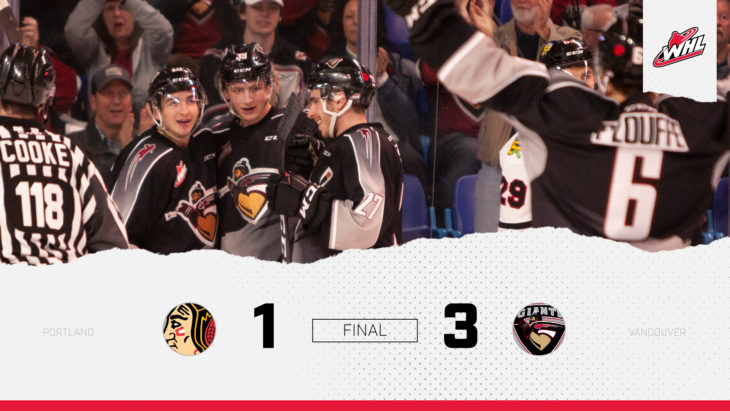 The Vancouver Giants opened a home-and-home set against the Portland Winterhawks with a 3-1 victory on home ice.

2020 NHL Draft prospect Lukas Svejkovsky, Tanner Brown, and Evan Patrician all scored in the first period to give the Giants an insurmountable lead. Reece Newkirk (New York Islanders) broke up the shutout bid in the third period with his fifth of the season.

Trent Miner (Colorado Avalanche) stopped 26 of 27 shots for the win. 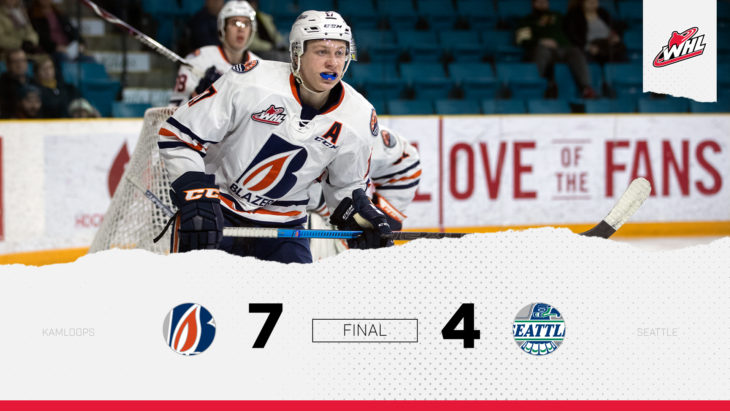 A four-point night from Brodi Stuart and a pair of goals by 2020 NHL Draft prospect Connor Zary lifted the Kamloops Blazers to a 7-4 victory over the Seattle Thunderbirds Friday.

The Blazers started with a bang thanks to a three-goal first period, featuring goals by Martin Lang, Ryley Appelt, and Zary. Luke Zazula scored a beauty to make it 4-0 in the second, but the T-Birds answered back with goals by Michael Horon and captain Matthew Wedman to make it a two-goal game after 40 minutes.

In the third, the Blazers continued to pour it on with goals from Orrin Centazzo, Zary, and Stuart to claim the win. Conner Bruggen-Cate and Keltie Jeri-Leon scored for Seattle in the final frame. 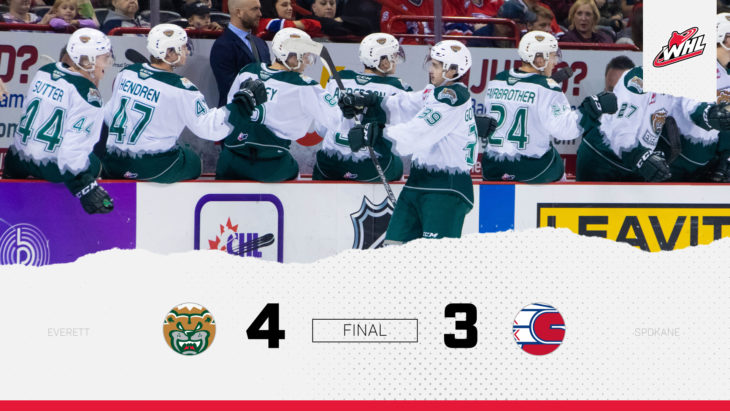 The Everett Silvertips earned their second victory against the Spokane Chiefs in six days, downing them 4-3 Friday night.

Gage Goncalves scored twice in the first to bookend a goal by Filip Kral (Toronto Maple Leafs). Conrad Mitchell extended Everett’s lead to two in the second and Jackson Berezowski notched the eventual game-winning goal early in the third.

The game was not without theatrics though as Adam Beckman (Minnesota Wild) and Eli Zummack scored late in the third to cut the deficit to a single goal and make things interesting.

Dustin Wolf (Calgary Flames) stopped 34 of 37 shots to hold on for the victory.