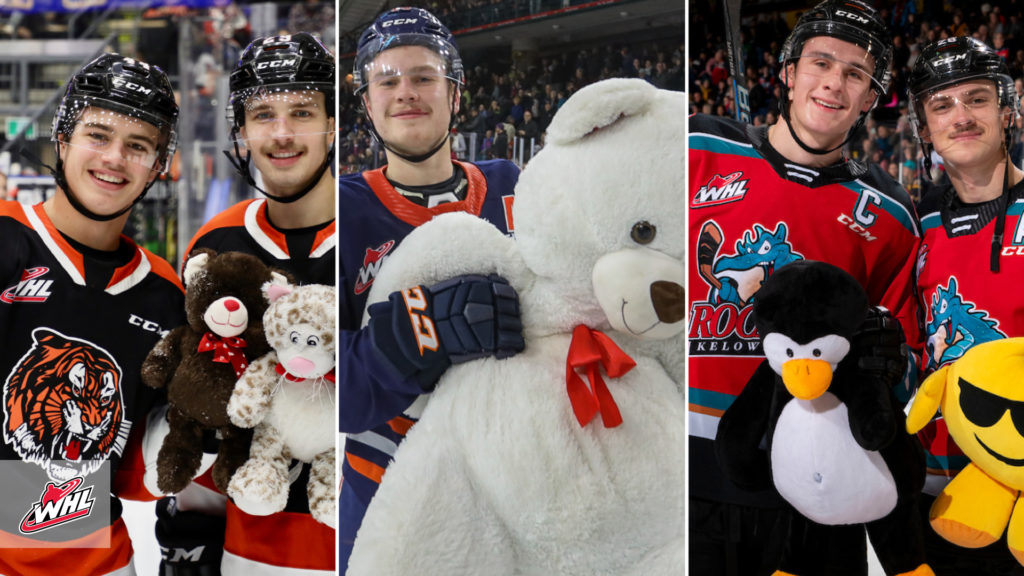 Fans around the Western Hockey League were treated to the first four game of the 2019-20 Teddy Bear Toss schedule Saturday as part of a 10-game schedule. The Swift Current Broncos, Medicine Hat Tigers, Kelowna Rockets, and Kamloops Blazers all got into the festivities with the latter three also capturing the victories from the game. The Prince Albert Raiders spoiled the party in Swift Current to sweep a home-and-home set. The Winnipeg ICE defended home turf in the tail end of a home-and-home series with the Brandon Wheat Kings thanks to Connor McClennon’s first hat trick of his WHL career. In Alberta, the Edmonton Oil Kings downed the Calgary Hitmen in an afternoon date while the Regina Pats edged the Red Deer Rebels thanks to the goaltending efforts of Max Paddock. In the U.S. Division, the Tri-City Americans also used strong goaltending to find the win column against the Vancouver Giants while the Spokane Chiefs turned the tables on Friday’s result to capture a win by the same methods over Victoria. Closing out the 10-game schedule, the Seattle Thunderbirds doubled up their geographical rivals in the Everett Silvertips. 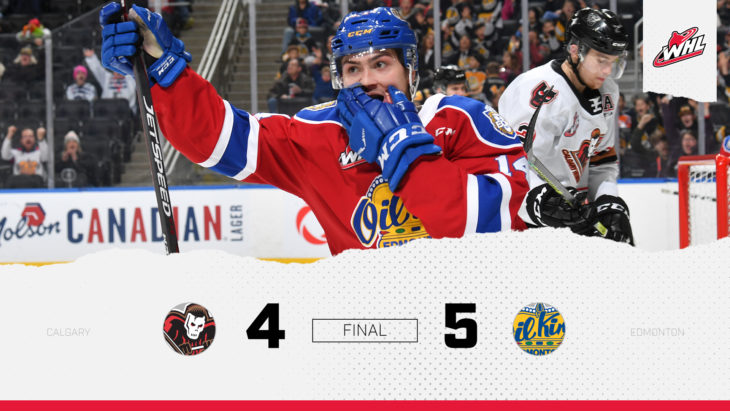 The Edmonton Oil Kings’ offence shone brightly on home ice Saturday afternoon as the downed the Calgary Hitmen by a 5-4 final.

Josh Williams notched the game-winning goal to cap a three-point night off a beautiful feed from 2020 NHL Draft prospect Carter Souch midway through the third.

It was the Hitmen leading the way through 20 minutes as both Orca Wiesblatt and Riley Stotts (Toronto Maple Leafs) found the back of the net.

Goals from Jalen Luypen, Loeden Schaufler, and David Kope brought the Oil Kings back into a tie with the Hitmen through 40 minutes as Adam Kydd notched Calgary’s third goal of the game.

Edmonton would press ahead in the third as Vladimir Alistrov and Williams’ aforementioned goal put the Oil Kings in front, surviving a late charge from Calgary that featured a Carson Focht (Vancouver Canucks) goal.

Sebastian Cossa stopped 19 of 23 shots to earn the victory. 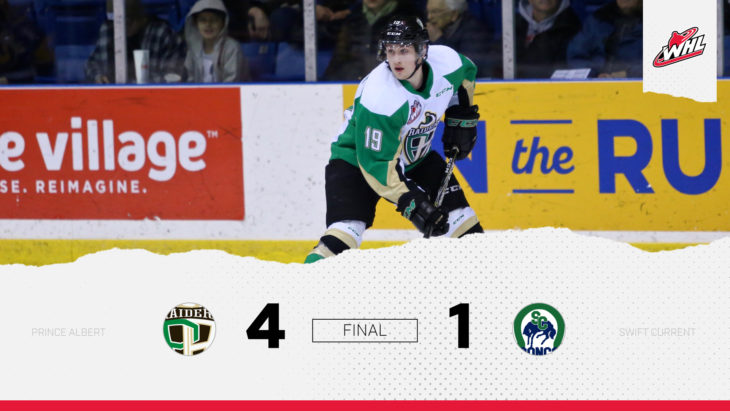 Goals from Daniil Stepanov and Brayden Watts featured in the first before Sergei Alkhimov send the teddy bears over the glass with his second-period goal.

Wiesblatt scored later on in the middle frame and ha the only goal of the third to close out the win.

Carter Serhyenko stopped 18 of 19 shots for the victory. 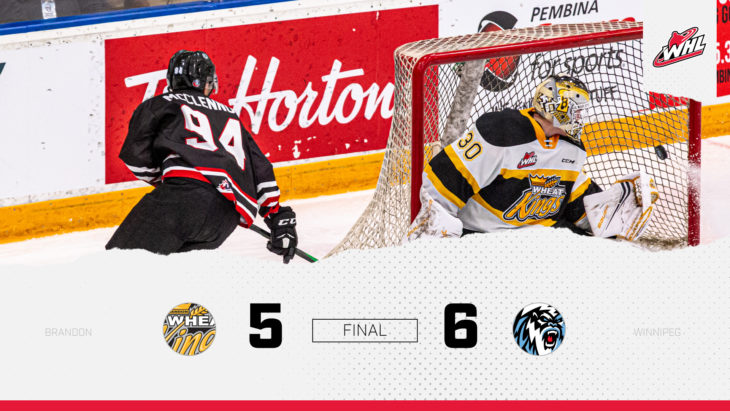 The first hat trick of Connor McClennon’s WHL career powered the Winnipeg ICE to a 6-5 win over the Brandon Wheat Kings and a split of their home-and-home set.

McClennon scored the second, third, and fifth goals of the game for Winnipeg while Michal Teply (Chicago Blackhawks), Nino Kinder, and Jakin Smallwood also found the back of the net.

Jesse Makaj made 23 saves for the victory. 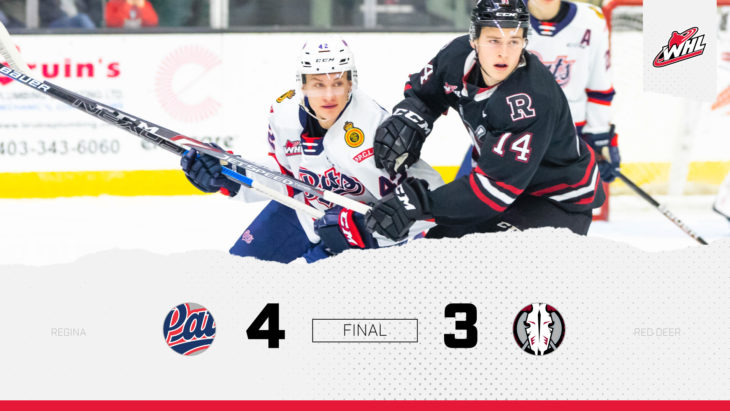 Robbie Holmes’ 10th goal of the season stood up as the difference Saturday as the Regina Pats topped the Red Deer Rebels by a 4-3 score.

Ty Kolle scored twice in the contest while Carson Denomie picked up his second goal in a Pats uniform to provide offensive support. Between the pipes, Max Paddock delivered a gem of a game with 45 saves on 48 shots.

Ethan Sakowich, Chris Douglas, and Cameron Hausinger scored for the Rebels in the narrow loss. 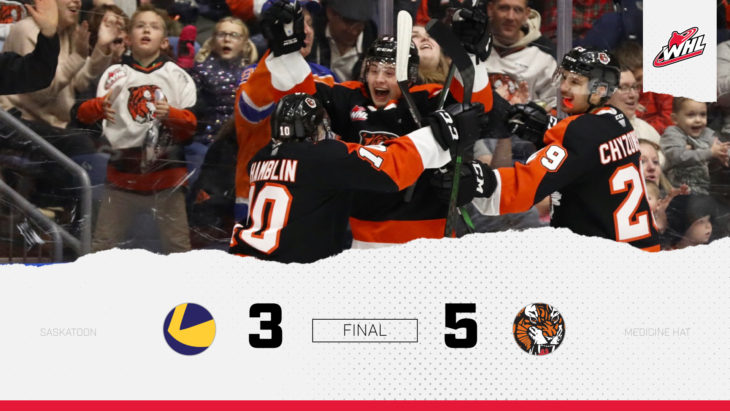 Brett Kemp sent the teddy bears flying in Medicine Hat Saturday, setting the tone ofr a 5-3 win for the Tigers over the Saskatoon Blades Saturday.

The Tigers needed to rally in the third period as the Blades took a 3-2 lead through 40 minutes. Riley McKay, Zach Huber, and Kyle Crnkovic had the Blades leading while the Tigers managed goals from Elijah Brown and Kemp.

Going on the attack in the third, Eric Van Impe, Corson Hopwo, and Jonathan Brinkman scored in a 93-second span to turn the tide in the contest.

Mads Søgaard (Ottawa Senators) stopped 20 of 23 shots for the win. 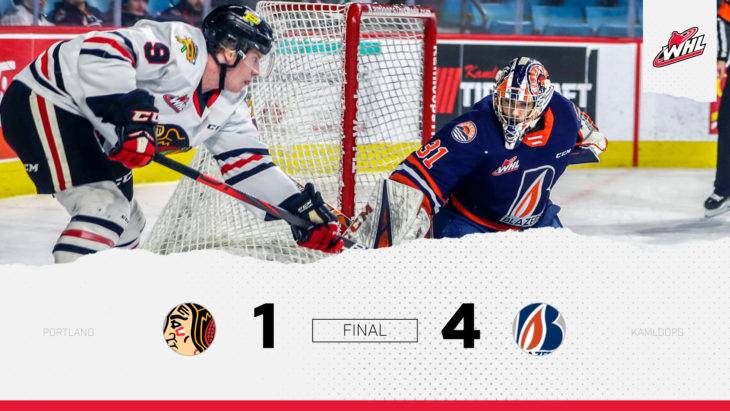 2020 NHL Draft prospect Connor Zary sent the teddy bears flying as he led his Kamloops Blazers team to a 4-1 win over the Portland Winterhawks Sunday.

Orrin Centazzo also scored in the first for Kamloops while Ryan Hughes scored in the second, and  Daylan Kuefler notched his first-ever WHL goal in the third. Reece Newkirk (New York Islanders) spoiled the party as his seventh goal of the season broke up the shutout bid late. 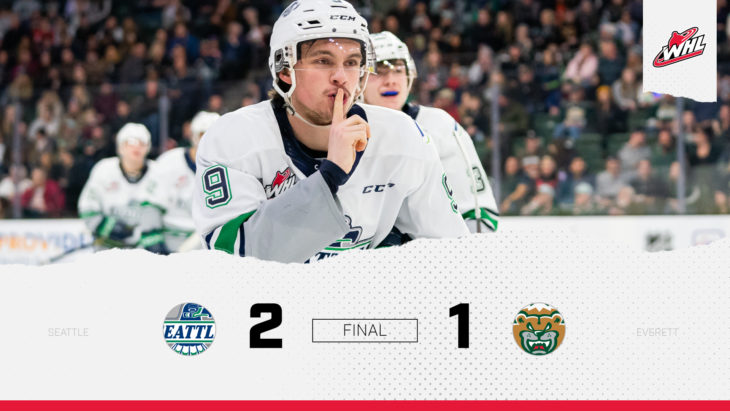 The Seattle Thunderbirds doubled up the Everett Silvertips by a 2-1 score Saturday to earn the road win.

Ronan Seeley opened the scoring in favour of the home side, but the T-Birds responded with a goal from Andrej Kukuca to tie up the game through 20 minutes. Looking for the tie-breaking goal in the third, the Thunderbirds put the puck in the net on a mad scramble, with Keltie Jeri-Leon appearing to push the puck over the goal line to secure the game-winning goal.

Roddy Ross (Philadelphia Flyers) was outstanding with 32 saves on 33 shots. 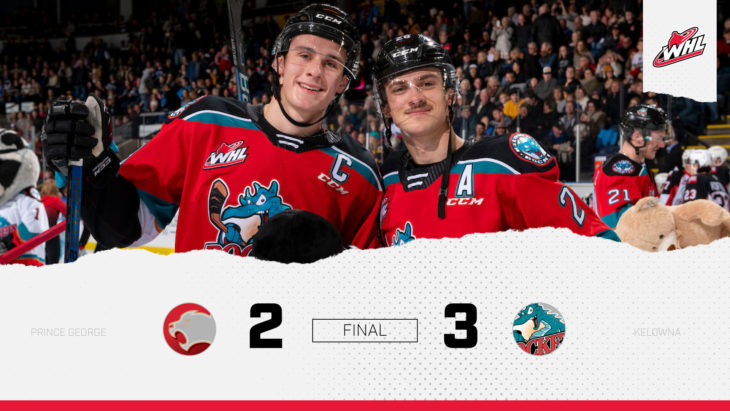 Sean Comrie also scored for the Rockets in the win, notching his third of the season in the second period. Responding for the Cougars, captain Johs Maser scored and Connor Bowie also lit the lamp.

Between the pipes, Roman Basran stopped 19 of 21 shots for the victory. 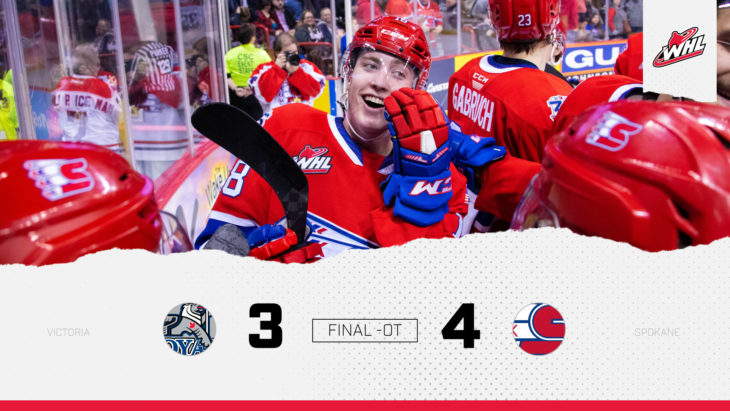 After being on the losing end of a comeback in overtime Friday, the Spokane Chiefs experienced the winning side of the equation in a 4-3 overtime triumph against the Victoria Royals.

Jacob Herauf, Gary Haden, and Tarun Fizer scored for the Royals to give them a 3-1 lead through 40 minutes as 2020 NHL Draft prospect Bear Hughes had the lone goal for the Chiefs.

That all changed in the third as Erik Atchison and Adam Beckman (Minnesota Wild) found the back of the net to tie up the game. Exactly two minutes into overtime, Filip Král (Toronto Maple Leafs) lifted the Chiefs into the win column on his ninth of the season.

Campbell Arnold stopped 19 of 22 shots to earn the victory. 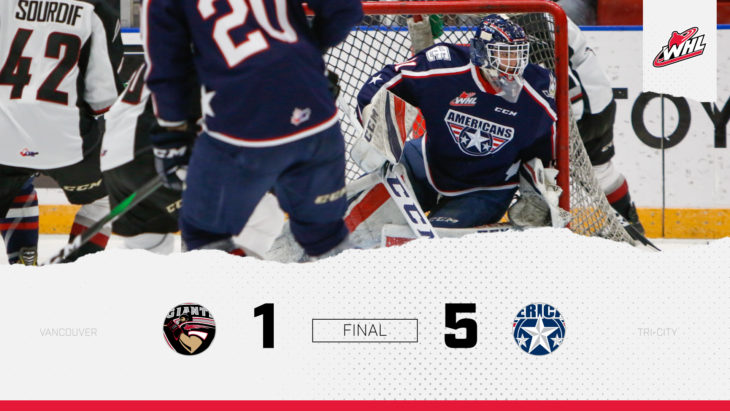 The Tri-City Americans snapped their losing streak in a big way Saturday, receiving a 43-save effort from Talyn Boyko and a three-point effort by Edge Lambert in a 5-1 win over the Vancouver Giants.

It was the Giants opening the scoring as Tristen Nielsen scored 3:51 into the opening period, but it’d be all Tri-City for the rest of the game.

Connor Bouchard and Lambert’s first of the game featured in the rest of the opening period while Nick Bowman and Lambert’s second came in the middle frame. Krystof Hrabik sent the fans to Burger Ranch in the third with an empty-net goal.

Boyko’s 33-save performance saw him stop 10 of 11 shots in the first period before turning aside all 33 shots through the final 40 minutes.