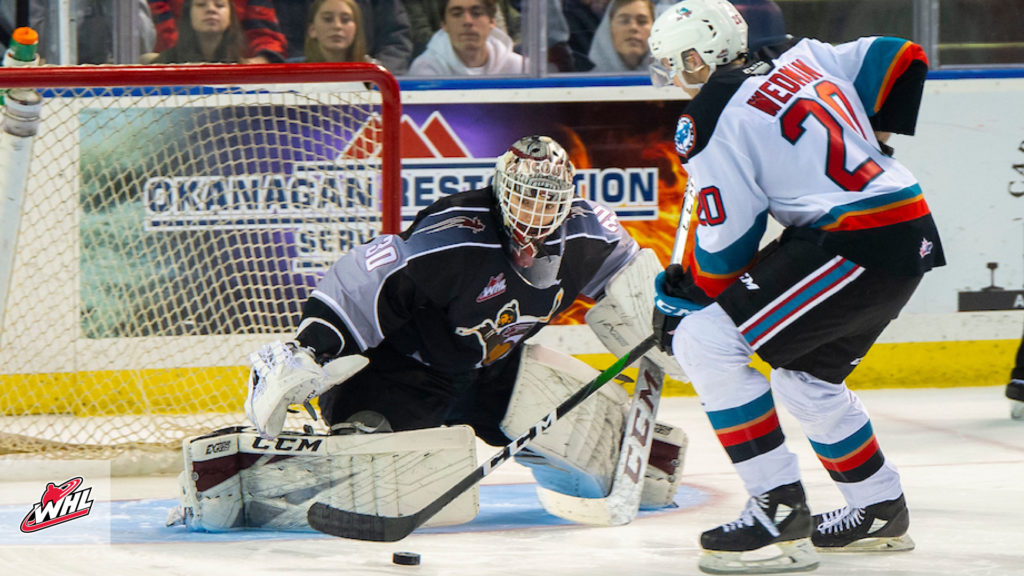 Another weekend of Western Hockey League action came to an end Sunday with a five-game schedule of action. The Winnipeg ICE fended off the Moose Jaw Warriors for a home win in Manitoba’s capital. The Regina Pats also defended home turf in Saskatchewan’s capital, topping the Saskatoon Blades in overtime. The Calgary Hitmen completed a sweep of a home-and-home set against the Red Deer Rebels while the Vancouver Giants earned a split in their home-and-home against the Kelowna Rockets. The Everett Silvertips closed out their week with a win against the Seattle Thunderbirds. 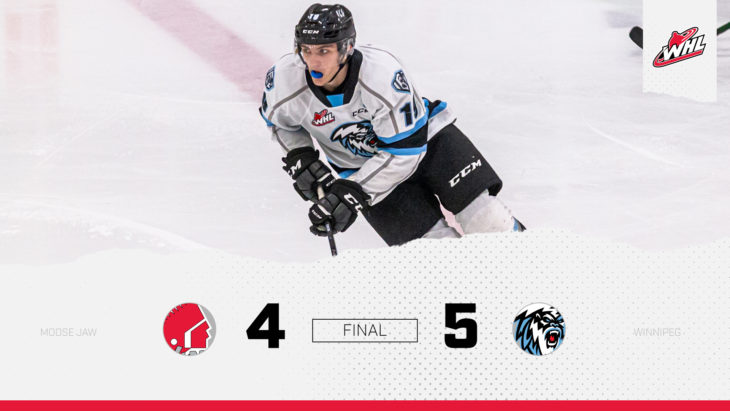 There were some tense final moments, but the Winnipeg ICE earned a 5-4 win against the visiting Moose Jaw Warriors Sunday afternoon in Manitoba’s capital.

Captain Peyton Krebs (Vegas Golden Knights) and defenceman Dawson Barteaux (Dallas Stars) each led the way with three-point efforts as Krebs scored twice while Barteaux had a pair of helpers.

Krebs scored both of his goals in the opening period, bookending a goal by Logan Doust to give the ICE a one-goal lead through 20 minutes.

Looking to spark a comeback effort, Kade Runke and Tate Popple scored in the third to bring the visitors within a goal, but the ICE would hang on for the win.

Jesse Makaj made 16 saves to earn the victory. 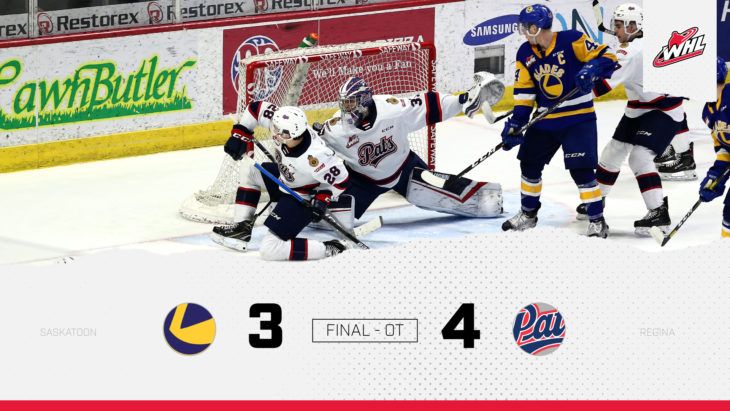 A back-and-forth contest between the Regina Pats and Saskatoon Blades was capped 3:29 into overtime by Cole Dubinsky’s third goal of the season as the Pats earned a 4-3 win at the Brandt Centre.

Carson Denomie and Robbie Holmes scored in the first period to build a 2-0 lead, but the Blades answered back with goals from 2020 NHL Draft prospect Tristen Robins and defenceman Scott Walford to tie things up near the midway point of the third.

Riley Krane put the Pats back in front by a goal 66 seconds later, but Radek Kucerik would score minutes later to tie up the game again.

After each team traded chances in overtime, Dubinsky would skate in and fire home the game-winning goal to lift the Pats to victory.

Donovan Buskey made 33 saves in the winning performance.

Logan Nijhoff and Kyle Crnkovic each picked up a pair of assists for their respective sides. 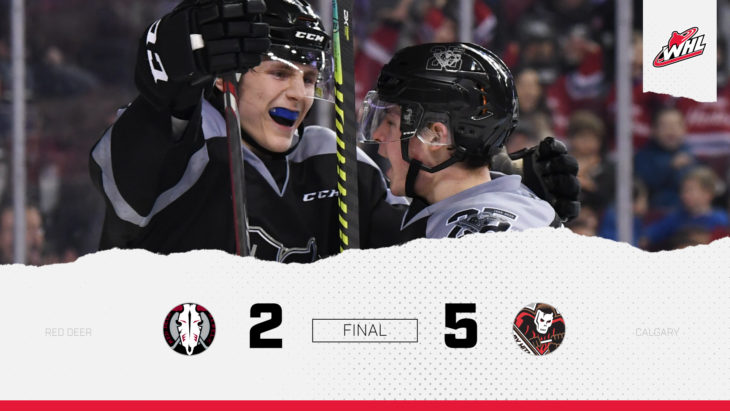 Three second-period goals propelled the Calgary Hitmen to a 5-2 win Sunday as well as a home-and-home sweep of the Red Deer Rebels.

Following a scoreless first, goals from Dakota Krebs opened the scoring 62 seconds into the middle frame. In a flurry of scoring, the Hitmen received goals from Riley Stotts (Toronto Maple Leafs) and Riley Fiddler-Schultz scored while Zak Smith put the Rebels on the board in a 117-second span.

Orca Wiesblatt and Josh Prokop scored 34-seconds apart early in the third to build up a four-goal advantage before Jayden Grubbe scored late for the Rebels.

Brayden Peters continued his solid play of late, making 23 saves for the victory.

Captain Mark Kastelic (Ottawa Senators) and Jett Woo (Vancouver Canucks) each contributed a pair of assists in the win. 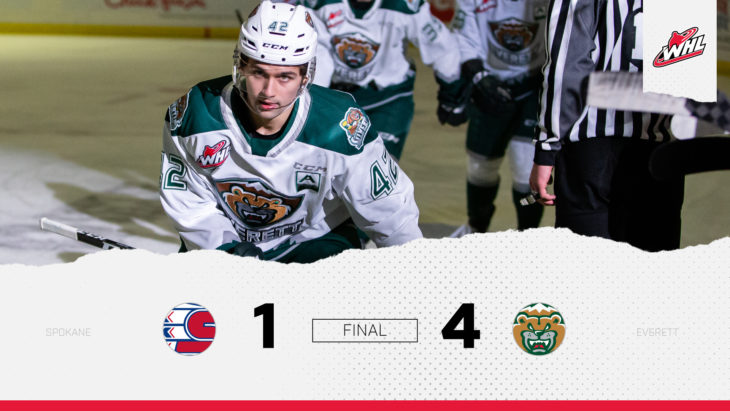 A pair of goals from Cole Fonstad (Montreal Canadiens) lifted the Everett Silvertips to a 4-1 win against the Spokane Chiefs Sunday in downtown Everett.

Fonstad had the lone goal of the first period and restored a one-goal advantage for his side after Luke Toporowski scored early in the second for Spokane.

Jake Christiansen extended the lead to two through 40 minutes and Ty Kolle scored the only goal of the third period to confirm the victory.

Dustin Wolf (Calgary Flames) made 34 saves for the win.

Christiansen finished with a goal and an assist while 2020 NHL Draft prospect Gage Goncalves picked up a pair of helpers in the win. 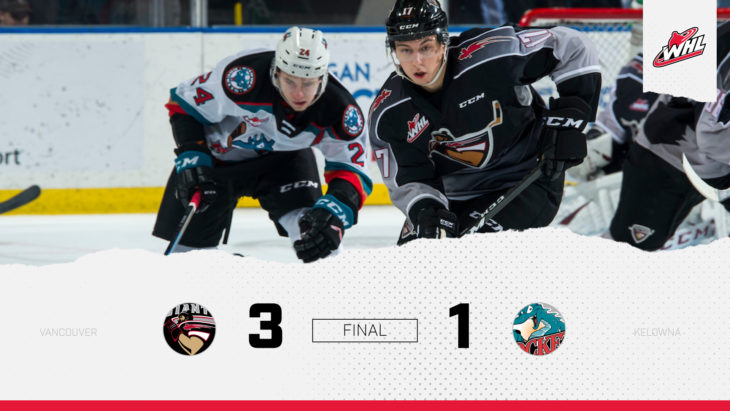 The Vancouver Giants bounced back with a 3-1 win over the Kelowna Rockets to split a home-and-home series Sunday at Prospera Place.

Michal Kvasnica had the lone goal through 40 minutes of action and then scored midway through the third to put the Giants up by a pair. Holden Katzalay would add to the Giants’ lead later in the period shortly before Alex Swetlikoff broke up the shutout bid.

David Tendeck (Arizona Coyotes) came within a few minutes of the clean sheet, but still put forth a strong effort with 24 saves for the win. 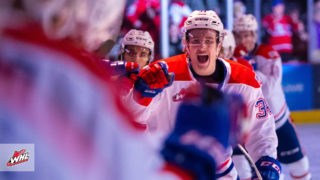