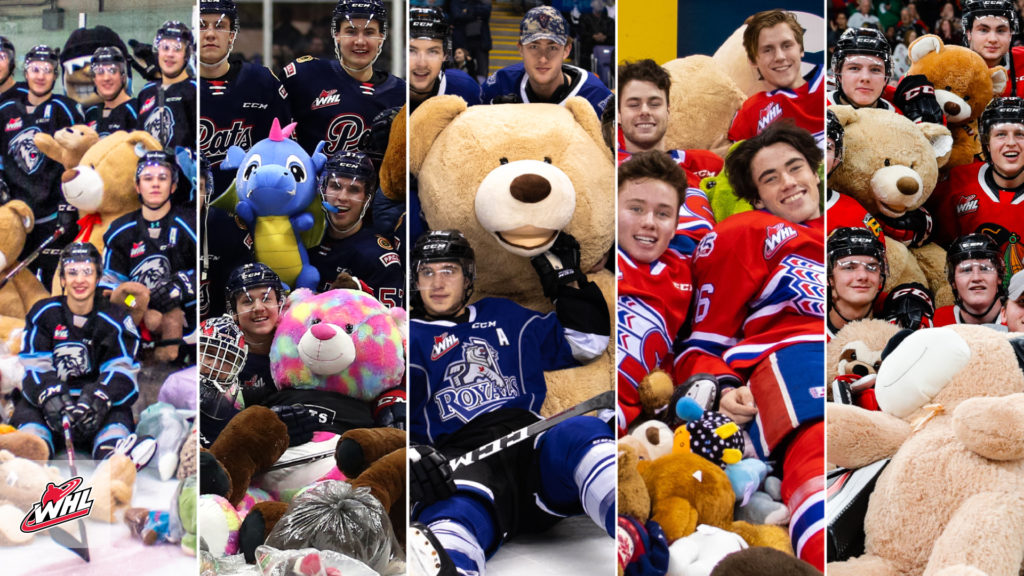 A busy Saturday night of Western Hockey League action saw 10 games take place with seven Teddy Bear Toss games on the schedule as well. The Winnipeg ICE, Regina Pats, Victoria Royals, Spokane Chiefs, and Portland Winterhawks all claimed victories. In Moose Jaw, the Prince Albert Raiders spoiled the party as their rookie movement led them to victory. Up in Saskatoon, the Kelowna Rockets made it two wins in as many nights against East Division opponents as they topped the Saskatoon Blades in the shootout. In Alberta, the visitors claimed both wins as the Calgary Hitmen won in overtime against Edmonton and the Everett Silvertips shutout the Medicine Hat Tigers. Over on Vancouver Island, the Victoria Royals pushed back to earn a split of a weekend series against the Seattle Thunderbirds. South of the border, the Portland Winterhawks shutout the visiting Prince George Cougars and the Spokane Chiefs pulled off another third-period comeback in a win against the Tri-City Americans. 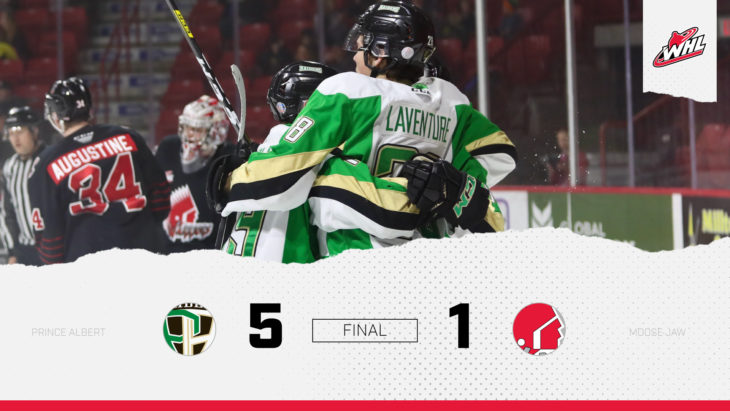 Warriors captain Owen Hardy sent the teddy bears onto the ice with his 14th goal of the season late in the opening period. In the second, Evan Herman and Tyson Laventure scored to increase the lead to three. Former Warrior Daniil Stepanov scored in the third to round out the game.

Carter Serhyenko stopped 28 of 29 shots in the win. 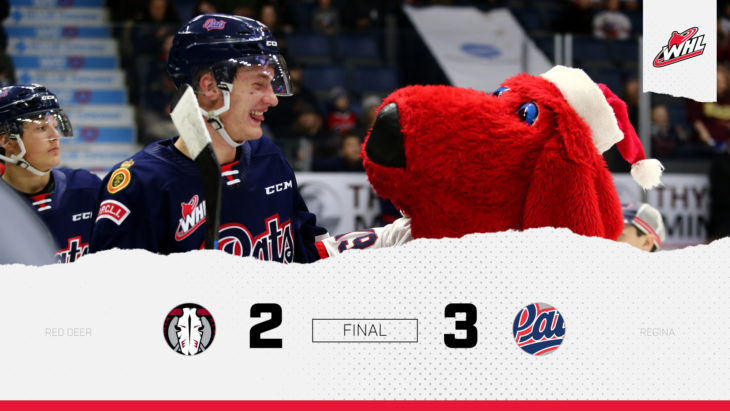 The Regina Pats picked up their second one-goal victory against the Red Deer Rebels in a week Saturday, topping them in the Queen City by a 3-2 score.

Captain Austin Pratt sent a cascade of fluff onto the ice in the first period, scoring the team’s Teddy Bear Toss goal. With an earlier strike by Josh Tarzwell, Pratt’s goal levelled the game at a 1-1 scores through 20 minutes.

In the second, goals by Drew Englot and Ty Kolle bookended a goal by Brett Davis to close out the scoring in the game.

Max Paddock stopped 26 of 28 shots to earn the victory. 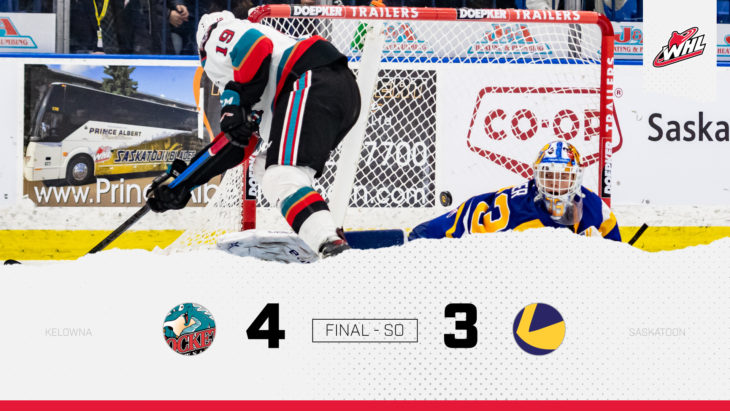 Ethan Ernst scored the only goal of the shootout Saturday as the Kelowna Rockets took a 4-3 decision over the Saskatoon Blades.

Searching for the tying goal late, the Rockets got it from the stick of Trevor Wong. Kaedan Korczak (Vegas Golden Knights) picked up his second assist on the game on the late goal.

Cole Schwebius held things together between the pipes for the Rockets, stopping 25 of 28 shots through 65 minutes before denying the Blades on all three shootout chances. 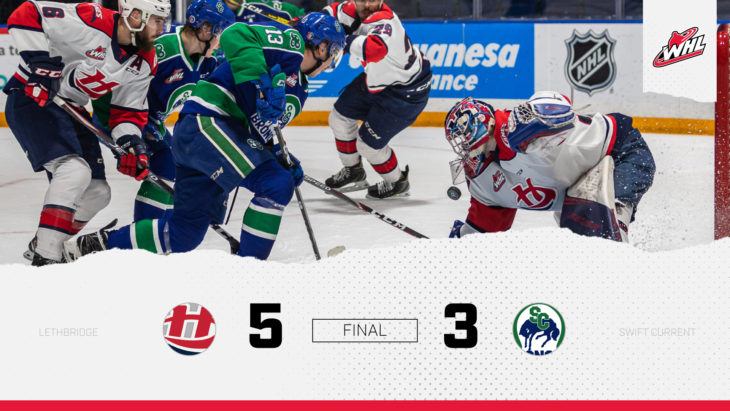 A three-point night from Dylan Cozens (Buffalo Sabres) powered the Lethbridge Hurricanes to a 5-2 victory against the Swift Current Broncos Saturday.

Jaxan Kaluski opened the scoring for the home side, but the Hurricanes answered back with goals by Logan Barlage, Nick Dorrington, and Zack Stringer to take the lead by the early part of the second.

Bronco Captain Ethan Regnier cut the deficit to one after 40 minutes, but goals from Alex Cotton and Cozens in the third closed out the win. Kaluski notched his second of the night in the final minute of regulation to complete a three-point night. 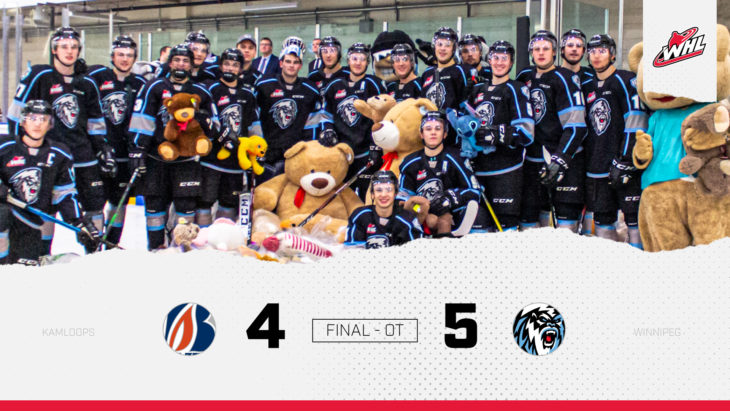 It was all Blazers through 40 minutes as Josh Pillar’s fourth of the season and a pair of goals by captain Zane Franklin put the visitors up by three.

The ICE roared back in the third with a Teddy Bear Toss goal by Benjamin Zloty, as well as strikes from Carson Lambos, Jakin Smallwood and 2020 NHL Draft prospect Connor McClennon. Orrin Centazzo also featured in the period with his 15th of the season.

Heading to overtime, the stage was set for Teply’s 13th goal in an ICE uniform, lifting the ICE to another home victory. Liam Hughes stopped 32 of 36 shots to earn his second win in as many nights. 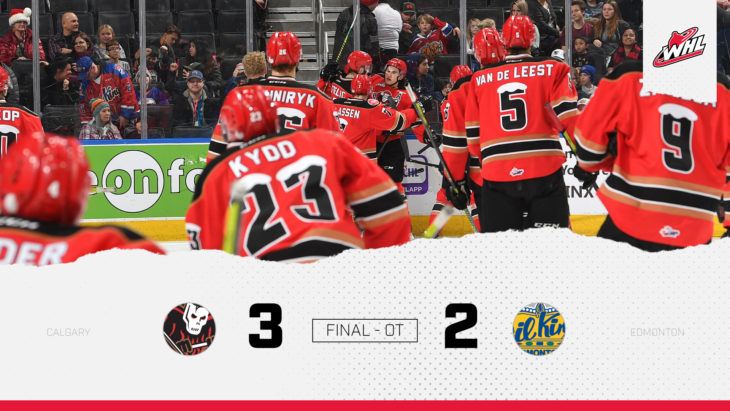 Jett Woo (Vancouver Canucks) scored a highlight-reel goal 2:31 into overtime Saturday, lifting the Calgary Hitmen to a 3-2 win against the Edmonton Oil Kings.

The Hitmen had Edmonton’s number through the first half of regulation as Riley Stotts (Toronto Maple Leafs) and captain Mark Kastelic (Ottawa Senators) struck for the visitors. Ethan McIndoe then tipped home a shot by Matthew Robertson (New York Rangers) to claim the Teddy Bear Toss goal for 2019. In the third, Josh Williams scored the lone goal to push the game into extra time where Woo would claim the extra point for his side. 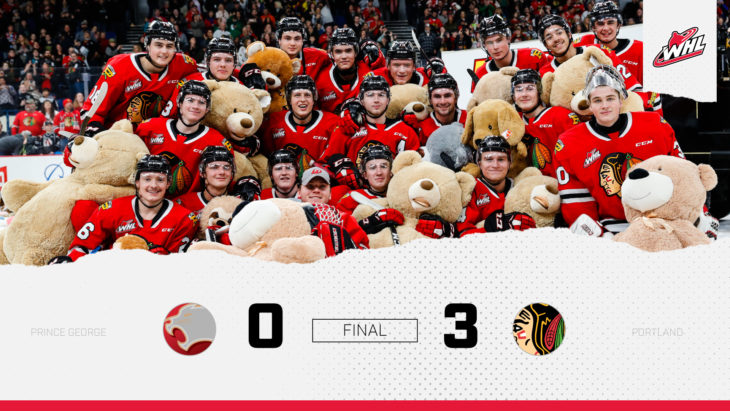 Lane Gilliss scored his second consecutive Teddy Bear Toss goal and Joel Hofer (St. Louis Blues) stopped all 25 shots for the eighth shutout of his WHL career as the Portland Winterhawks rolled to a 3-0 win against the Prince George Cougars.

Five different Winterhawk skaters recorded an assist in the win. 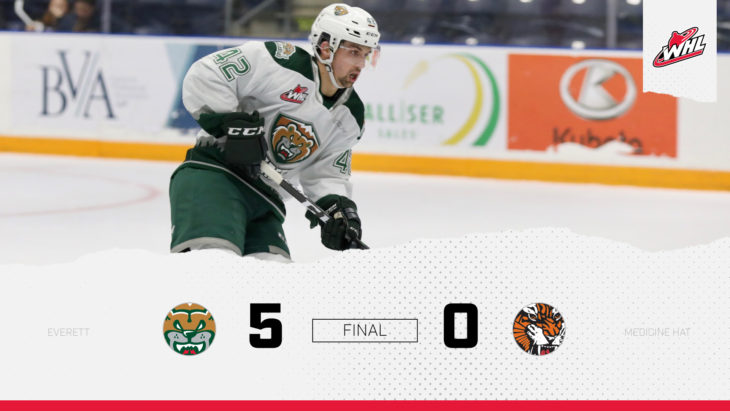 A 41-save shutout from Dustin Wolf (Calgary Flames) led the Everett Silvertips past the Medicine Hat Tigers Saturday in eastern Alberta.

Captain Bryce Kindopp scored his second game-winning goal in as many nights while Jake Christiansen scored a pair of goals. Cole Fonstad (Montreal Canadiens) also scored as part of a three-point night. Ronan Seeley also got on the scoresheet with his third of the season. 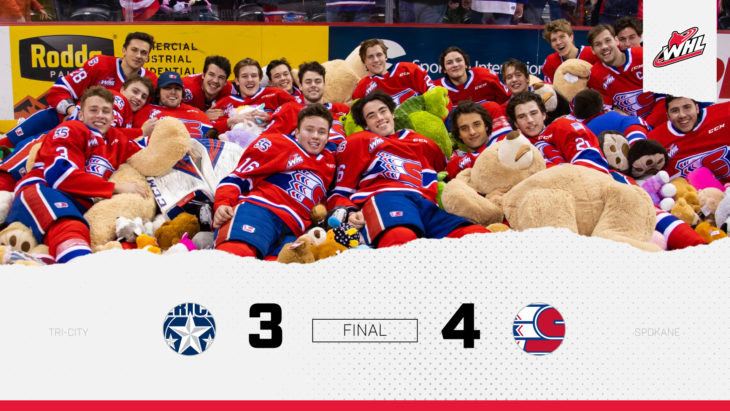 Luke Toporowski’s sixth goal of the season stood up as the difference as the Spokane Chiefs topped the Tri-City Americans 4-3.

Just 41 seconds into Saturday’s game, Adam Beckman (Minnesota Wild) sent the teddy bears flying on his 14th goal of the season. The Americans would push back to take the lead as Nick Bowman scored late in the first and Booker Daniel struck early in the second to make it 2-1. Goals by Cordel Larson and Luke Zazula would keep the difference at one heading to the third.

In the third, the Chiefs accomplished the comeback with goals by Eli Zummack and Toporowski. 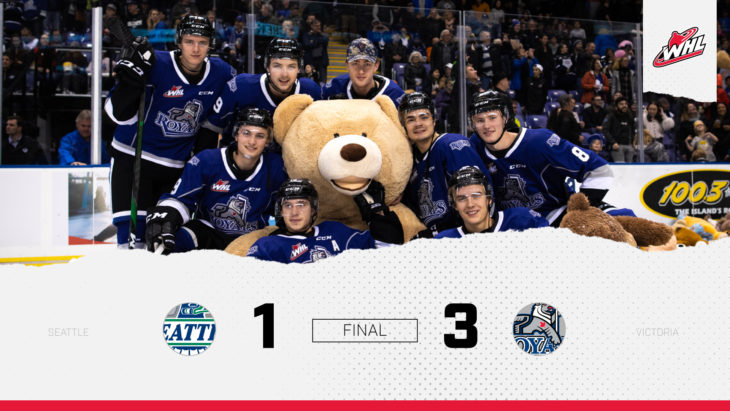 River Fahey sent the teddy bears flying in the provincial capital Saturday while a pair of goals from Brandon Cutler provided the difference in a 3-1 win for the Victoria Royals against the Seattle Thunderbirds.

Thunderbird Henrik Rybinski (Florida Panthers) opened the scoring before Fahey tied up the game through 20 minutes.

In the second, Cutler scored the game-winning goal and insurance goal 5:15 apart to put the home side ahead for good.

Shane Farkas took the win with 31 saves on 32 shots.