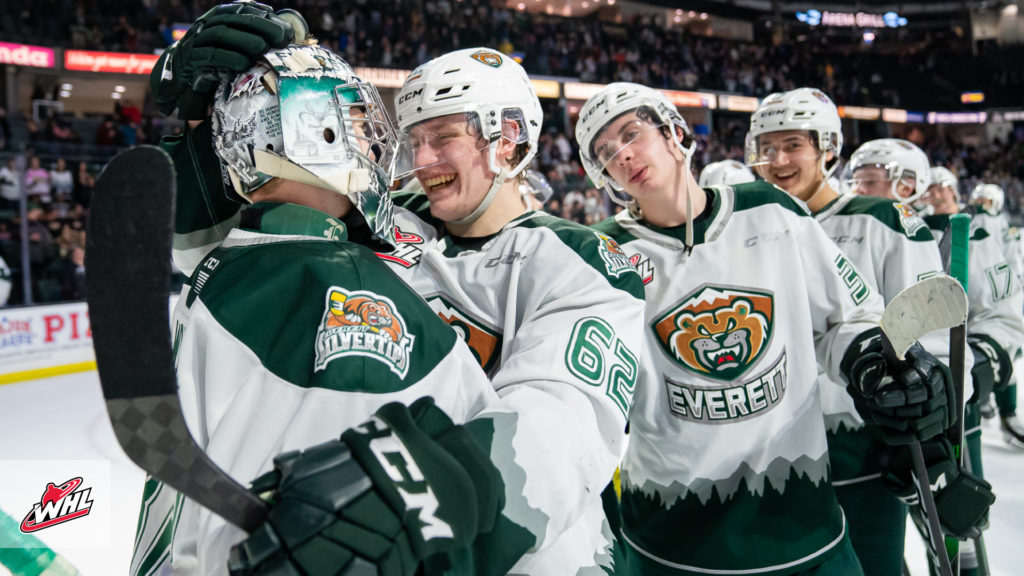 A 10-game schedule of Western Hockey League action provided plenty of action Friday night. The Prince Albert Raiders and Medicine Hat Tigers were both victorious by 4-1 scores in Saskatchewan. The Regina Pats took down the Victoria Royals in a shootout while the Saskatoon Blades pitched a shutout down the road against the Moose Jaw Warriors. The Brandon Wheat Kings returned to their winning ways of late against the Calgary Hitmen while the Red Deer Rebels beat a Manitoban team for the second time in three days, edging the Winnipeg ICE in central Alberta. The Spokane Chiefs opened up a home-and-home against the Kelowna Rockets with a sizeable win while the Prince George Cougars took down the Tri-City Americans. In British Columbia’s Lower Mainland, the Vancouver Giants were boosted to an overtime win against the Kamloops Blazers. In the lone game of the night south of the 49th parallel, the Everett Silvertips put an end to the Portland Winterhawks’ 21-game undefeated-in-regulation streak. 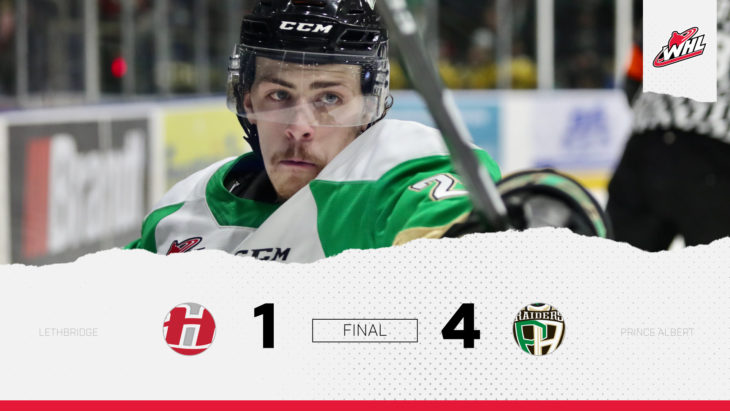 In the 300th game of his WHL career, Brayden Watts tallied a pair of goals, including the game-winning strike, as the Prince Albert Raiders topped the visiting Lethbridge Hurricanes 4-1.

2020 NHL Draft prospect Ilya Usau and Trevor Thurston traded goals early in the second to get both teams on the board, but Watts would push the Raiders ahead for good late in the frame.

In the third, captain Zack Hayes and Watts’ second of the game featured to add comfort to the win. 2020 NHL Draft prospect Kaiden Guhle added a pair of helpers in the win.

Max Paddock made 18 saves on 19 shots to collect the victory. 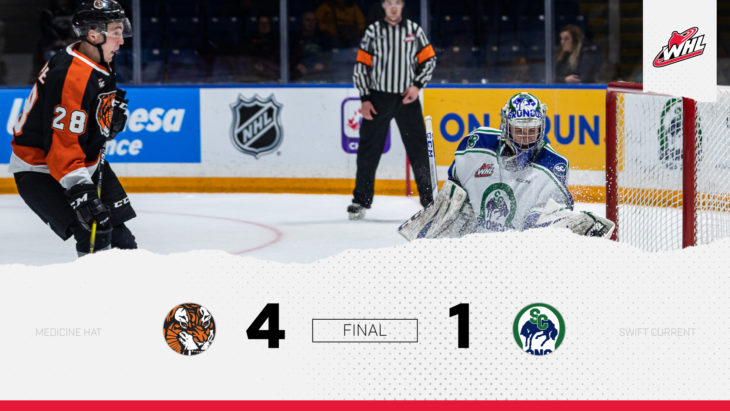 A three-goal third period propelled the Medicine Hat Tigers to a 4-1 road win against the Swift Current Broncos.

Erik Houk opened the scoring in the first, but Bryan Lockner tied up the game in the second to keep the teams level through 40 minutes.

In the span of 70 seconds in the middle of the third, Ryan Chyzowski and captain James Hamblin each scored to make it a 3-1 game. Parker Gavlas’ second of the season made it a 4-1 game minutes later. 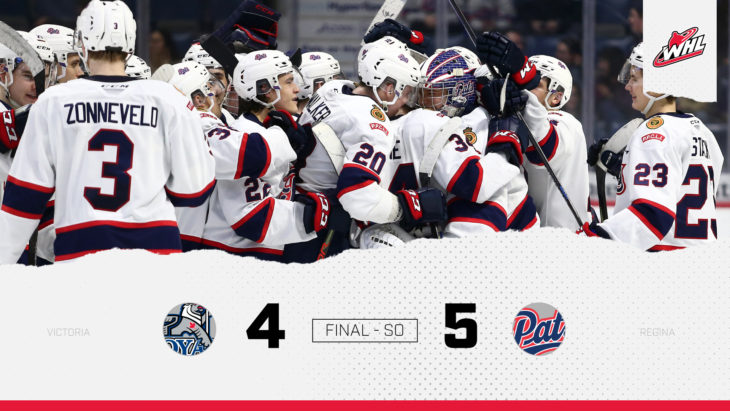 Regina Pats captain Austin Pratt had a goal and an assist in the 300th regular season game of his WHL career Friday as they downed the Victoria Royals 5-4 in a shootout in Saskatchewan’s provincial capital.

Goals from Brandon Cutler and Gary Haden had the Royals up by a pair until Pratt scored late in the opening period to make it a 2-1 game through 20 minutes. Cole Carrier then tied up the game with the first goal of his WHL career in the second.

In the third, Carson Denomie put the home side ahead until the Royals responded with Cutler’s second of the night and the first goal of Alex Bolshakov’s WHL career to put them ahead once again. However, Logan Nijhoff would tie the game in the second half of the third to prolong the contest.

With the game progressing to a shootout, Donovan Buskey turned aside all three Victoria chances while Cole Dubinsky had the lone goal of the extra extra frame.

Buskey made 25 saves in regulation and overtime before claiming the shootout win. 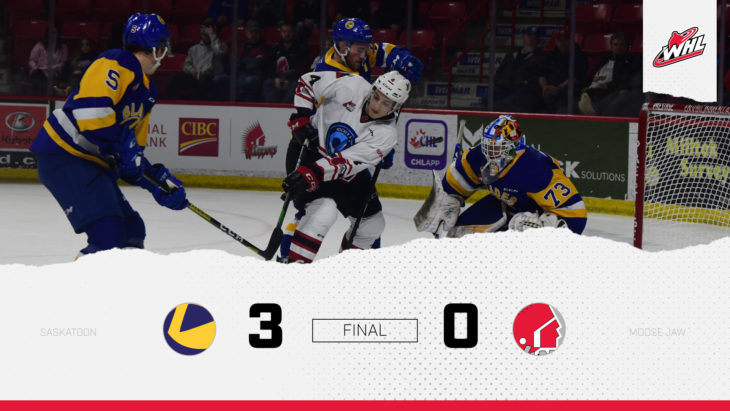 Nolan Maier posted a 20-save shutout and Riley McKay scored twice as the Saskatoon Blades silenced the Moose Jaw Warriors in a 3-0 result.

Maier made 10 saves in the first followed by five in each of the second and third periods.

McKay scored in the second to have the lone goal through 40 minutes. He added his second of the game in the third and 2020 NHL Draft prospect Tristen Robins closed out the win with his 23rd of the season. 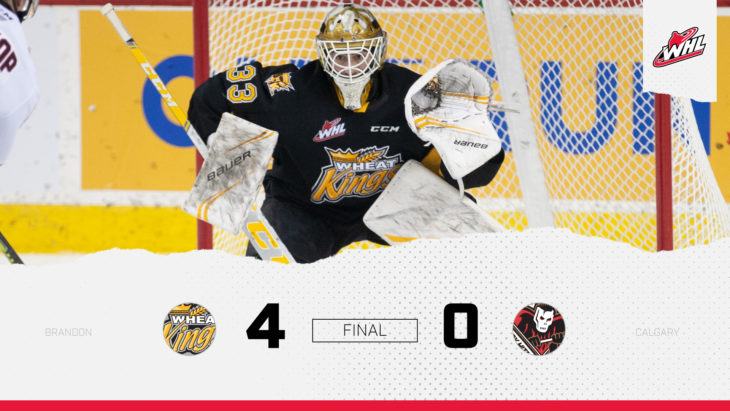 Jiri Patera (Vegas Golden Knights) recorded a 37-save shutout and the Brandon Wheat Kings returned to their winning form with a 4-0 shutout of the Calgary Hitmen in southern Alberta.

Patera stopped nine shots in the first, 15 in the second, and 13 in the third for his fifth shutout of the season.

Luka Burzan (Colorado Avalanche) and Marcus Sekundiak scored in the first. Lynden McCallum got in on the scoring fun in the second and Burzan added his second of the game in the third. 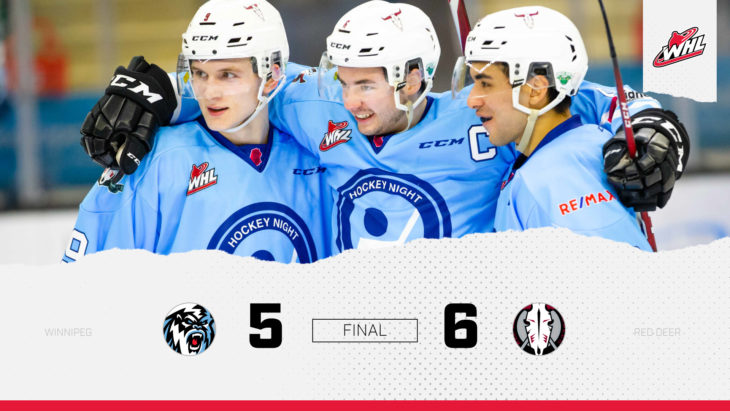 For the second time in three nights, the Red Deer Rebels went toe-to-toe with a contender from the East Division and emerged with a regulation victory, topping the Winnipeg ICE 6-5 Friday.

Jace Isley scored a pair of goals while 2020 NHL Draft prospect Ben King scored to give the Rebels a 3-2 lead through 40 minutes. In the third, Keaton Sorensen, Josh Tarzwell, and captain Ethan Sakowich scored to keep the Rebels ahead. Isley added a helper on Red Deer’s fifth goal for the three-point night.

Goals from Michal Teply (Chicago Blackhawks) and Isaac Johnson had the ICE within a goal through two periods. Jackson Leppard briefly tied the game in the early stages of the third before Red Deer pulled ahead. Bringing them within a goal late, former Rebel captain Dawson Barteaux (Dallas Stars) scored for the ICE while also receiving a warm welcome back from the fans.

Byron Fancy hung on to earn the win by making 27 saves. 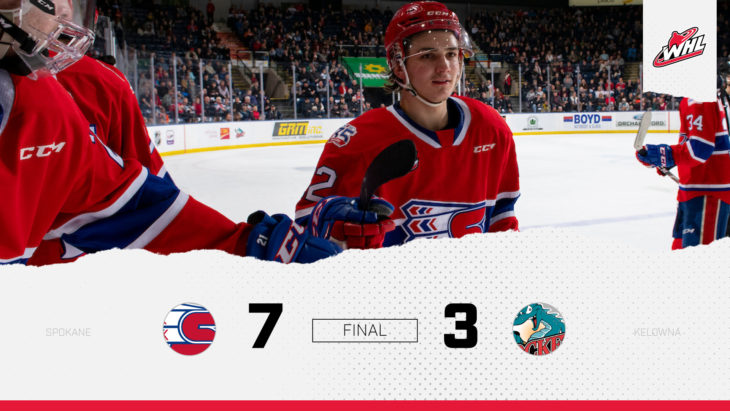 The Spokane Chiefs opened a home-and-home set against the Kelowna Rockets with a convincing 7-3 win at Prospera Place.

Spokane scored four times in the opening period, including three times in the first 5:17 of game play. They scored twice more in the second and once in the third.

Lukas Parik (Los Angeles Kings) made 20 saves for the victory. 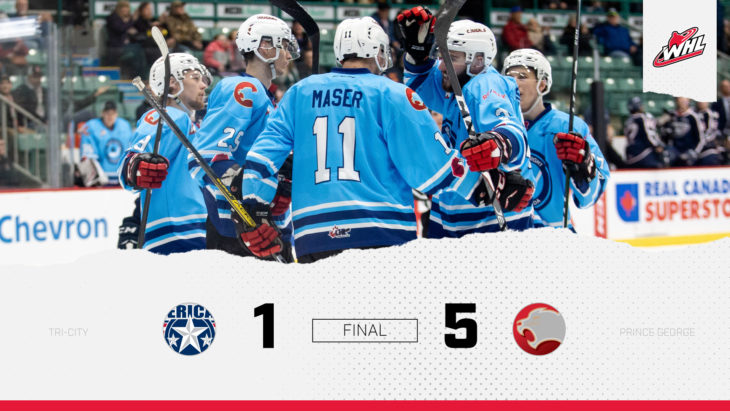 Ilijah Colina kickstarted a four-goal third period as the Prince George Cougars cruised to a 5-1 win against the visiting Tri-City Americans in northern British Columbia.

Mikhalchuk’s goal capped off a three-point night for the import forward while Moberg and Upper each had a goal and an assist in the win. 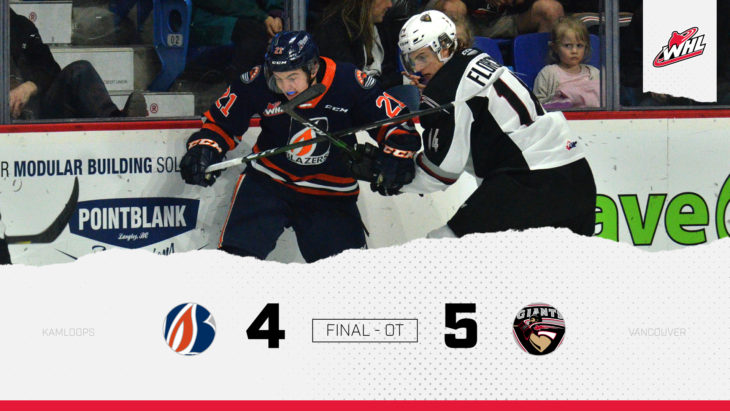 Eric Florchuk (Washington Capitals) scored a gorgeous coast-to-coast goal in the final minute of overtime to lift his Vancouver Giants to a 5-4 win against the visiting Kamloops Blazers.

The Blazers were rolling on first-period goals by 2020 NHL Draft prospects Josh Pillar and Connor Zary.

Striking back in an 11:31 span of game play in the second, Michal Kvasnica, 2020 NHL Draft prospect Justin Sourdif, Milos Roman (Calgary Flames), and Bowen Byram (Colorado Avalanche) all tallied goals to make it 4-2 game favouring the home side.

Kamloops would respond with goals from Zary and Orrin Centazzo in the third to force extra time, but Florchuk would deliver the win late in the extra period.

David Tendeck (Arizona Coyotes) turned aside 26 of 30 shots for the win. 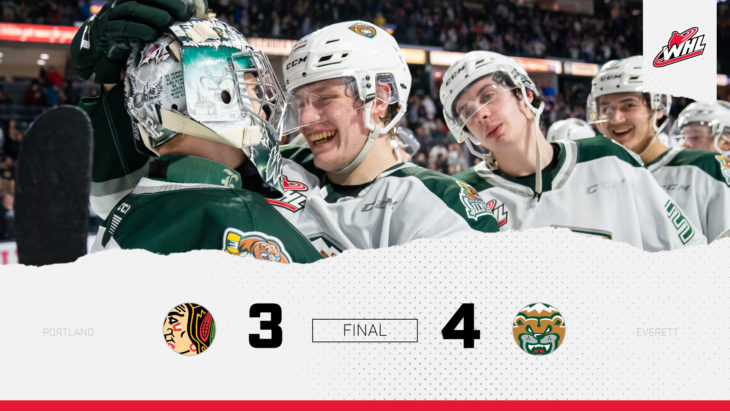 The Everett Silvertips became the first team to beat the Portland Winterhawks in regulation since early November 2019, downing them 4-3 in northern Washington state Friday.

Silvertips captain Bryce Kindopp scored a pair of goals while Dustin Wolf (Calgary Flames) made 32 saves for the win.

Goals from 2020 NHL Draft prospect Jonas Brøndberg and Jake Gricius featured early in the second for the Winterhawks, but Kindopp’s first of the game and a Brendan Lee strike kept things tied through 40 minutes.

Wyatte Wylie (Philadelphia Flyers) put the Silvertips up 22 seconds into the third and Kindopp added his 32nd of the season before Winterhawks’ captain Johnny Ludvig (Florida Panthers) scored late to keep the visitors within a goal.