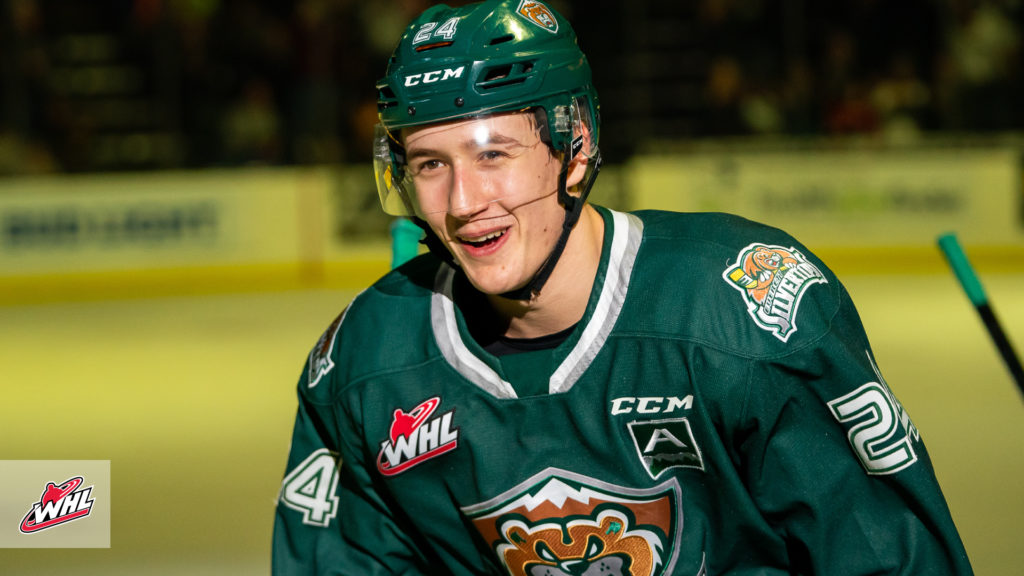 A nine-game schedule of action featured around the Western Hockey League Friday night. In Manitoba, Carson Focht played the role of overtime hero for the Calgary Hitmen against the Brandon Wheat Kings. In Saskatchewan, the Regina Pats earned some revenge against the Swift Current Broncos, shutting them out in their own barn. The Medicine Hat Tigers continued to roll as they downed the visiting Moose Jaw Warriors. In the only other Alberta-based game Friday, the Prince Albert Raiders won a battle between two of the league’s top-three teams against the Lethbridge Hurricanes. In northern British Columbia, the Prince George Cougars ended a long winless streak against the Kamloops Blazers on home ice. Over on Vancouver Island, a hat trick from captain Phillip Schultz powered the Victoria Royals past the Edmonton Oil Kings. South of the 49th parallel, the Everett Silvertips retired Mitch Love’s jersey before earning a victory against his Saskatoon Blades. Also in Washington state, the Kelowna Rockets and Winnipeg ICE earned 3-2 victories, with the ICE playing a little bit of overtime to earn their second point. 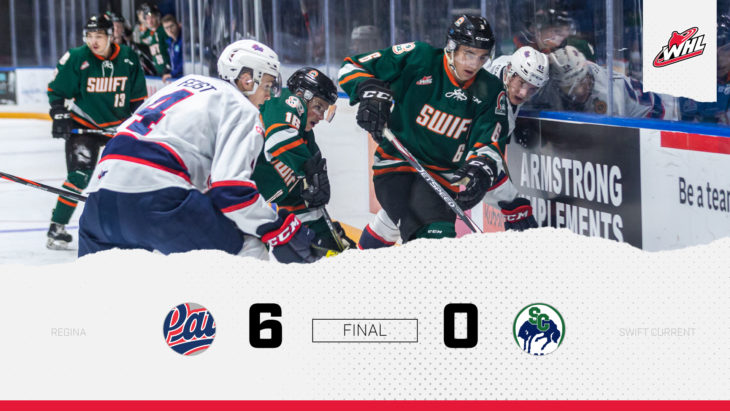 Robbie Holmes recorded the first hat trick of his WHL career as the Regina Pats earned a 6-0 victory against the Swift Current Broncos Friday.

Between the pipes, Max Paddock turned aside all 25 shots from the Broncos, stopping eight shots in the first, seven in the second, and 10 in the third.

Holmes scored the second, third, and fifth goals of the game for the Pats while Riley Krane opened the scoring to earn the game-winning goal. Nikita Sedov and Zack Smith also scored in the victory.

Zach Wytinck, Drew Englot, Carson Denomie, and Tyson Feist each had a pair of helpers in the victory. 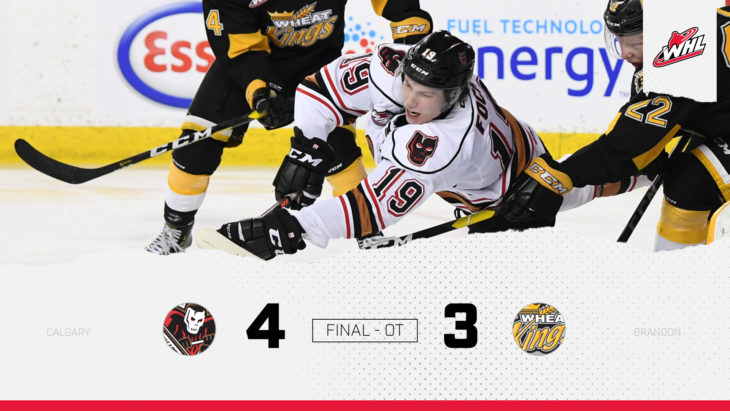 Carson Focht (Vancouver Canucks) scored with 80 seconds left in overtime as the Calgary Hitmen earned a come-from-behind 4-3 victory against the Brandon Wheat Kings in Manitoba.

The Hitmen took the lead through 20 minutes on goals from Orca Wiesblatt and Blake Allan, but the Wheat Kings responded in the second with goals from captain Connor Gutenberg, Marcus Sekundiak, and Cole Reinhardt.

Wiesblatt’s second of the game came 51 seconds into the third to tie things up before Focht’s 12th of the season won it in extra time. 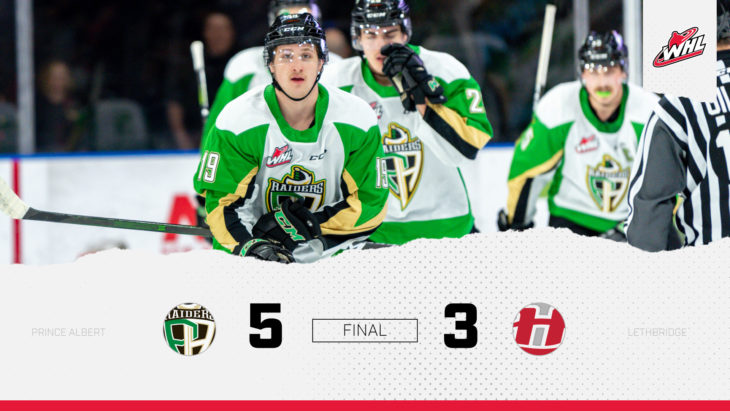 In a battle of two of the top three teams in the WHL, the Prince Albert Raiders earned a 5-3 victory against the Lethbridge Hurricanes in southern Alberta.

The first three goals of the game came courtesy 2020 NHL Draft prospects as Noah Boyko opened the scoring before Ozzy Wiesblatt and Kaiden Guhle struck for the visitors. Aliaksei Protas (Washington Capitals) closed out the offence in the period with his 16th goal of the season to give the Raiders a 3-1 lead through 20 minutes.

Lethbridge pressed back in the middle stanza with goals from D-Jay Jerome and Logan Barlage, but the Raiders owned the third period with goals by Daniil Stepanov and Protas’ second of the night to win by a two-goal margin.

Boston Bilous stopped 30 of 33 shots for the victory. 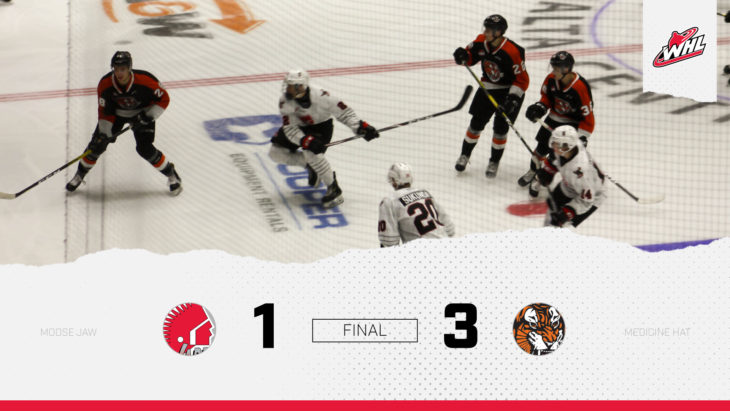 Owen Hardy opened the scoring for the Warriors in the first, but Nick McCarry responded later in the frame to keep the teams tied through 20 minutes.

In the second, captain James Hamblin and Tyler Preziuso found the back of the net in a 1:47 span. Trevor Longo assisted on the Tigers’ first two goals of the game.

That was more than enough offence for 2020 NHL Draft prospect Garin Bjorklund, who stopped 23 of 24 shots to improve to 7-1 on the season. 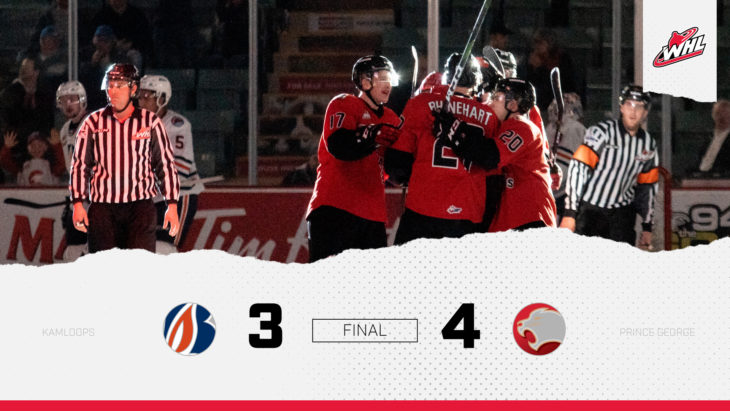 Connor Bowie’s second goal of the game came midway through the third period and stood up as the difference as the Prince George Cougars topped the Kamloops Blazers by a 4-3 score Friday on home ice.

The Cougars struck three times in the first on goals by captain Josh Maser, Bowie’s first of the game, and a late goal by 2020 NHL Draft prospect Rhett Rhinehart. Goals from Orrin Centazzo and captain Zane Franklin kept the division-leading Blazers in close pursuit though through 20 minutes.

Franklin scored the lone goal of the second period to bring the teams into a tie before Bowie netted the winning goal in the final period.

Taylor Gauthier stopped 41 of 44 shots for the victory. 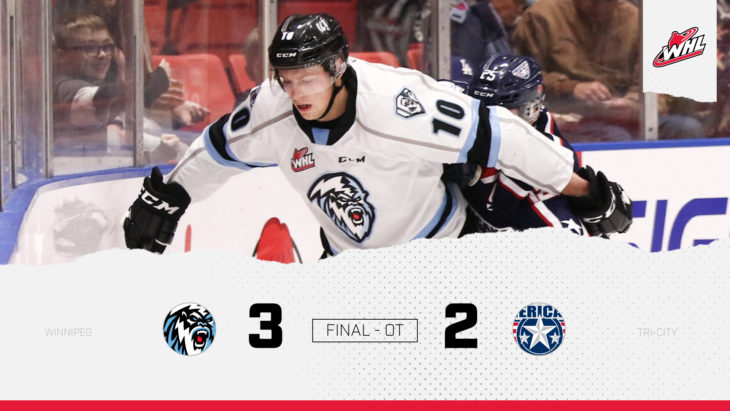 Isaac Johnson scored on a breakaway in overtime against his former team Friday as the Winnipeg ICE topped the Tri-City Americans 3-2 in overtime.

Blake Stevenson scored twice in the second to open the game in favour of the homeside, but Cole Muir and Jakin Smallwood responded in regulation for the ICE before Johnson’s game-winning goal. 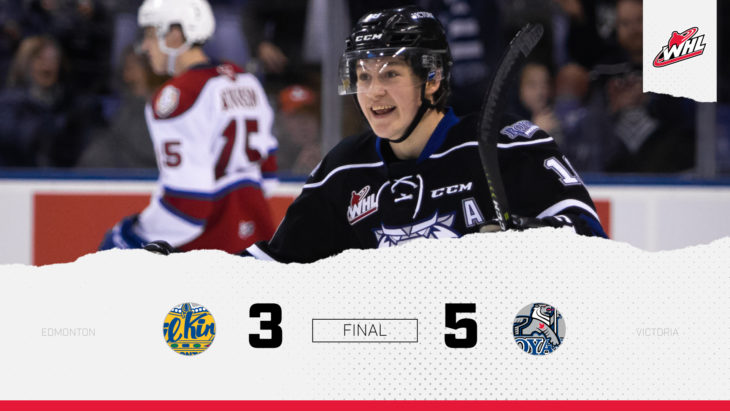 Victoria Royals captain Phillip Schultz recorded the second hat trick of his WHL career and Shane Farkas made 36 saves to stop the Edmonton Oil Kings in their tracks Friday night with a 5-3 decision.

Schultz scored the first and scored goals of the game for the home side, then added Victoria’s fifth goal of the contest in the third while short handed. Jacob Herauf and Keanu Derungs also scored for the Royals. Tarun Fizer collected three assists in the victory. 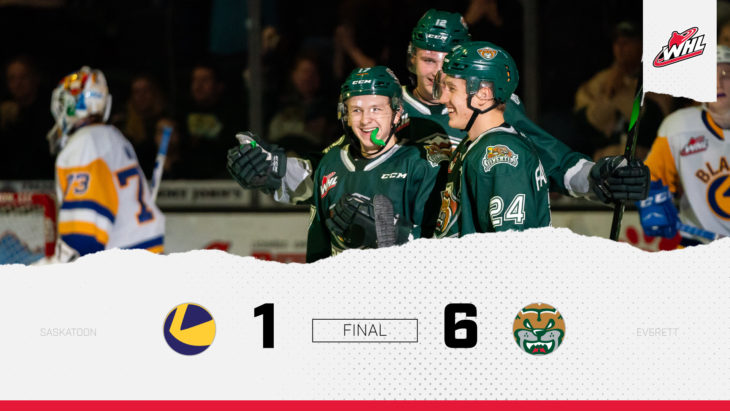 After the Everett Silvertips honoured one of their most-legendary defencemen in Mitch Love, the current generation of blue liners took over in a 6-1 win against the Saskatoon Blades

Gianni Fairbrother (Montreal Canadiens) scored twice as part of a three-point night and 2020 NHL Draft prospect Ronan Seeley potted four assists to lead the way from the blue line. Up front, Gage Goncalves and Jackson Berezowski each scored twice in the contest.

Saskatoon struck first on a goal by Radek Kucerik, but it was all Silvertips from there on out. 2020 NHL Draft prospect Michal Gut added three assists while Cole Fonstad (Montreal Canadiens) had a pair of helpers. 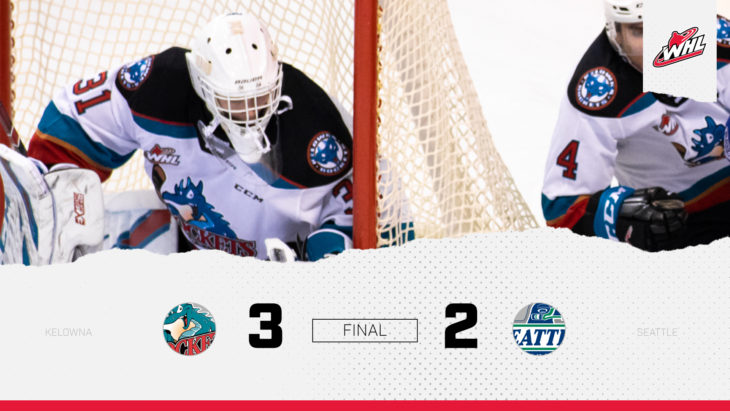 Dallon Wilton opened the scoring before Hamaliuk scored once in the first and once more in the third to provide the difference. Rockets’ captain Nolan Foote (Tampa Bay Lightning) assisted on both of Hamaliuk’s goals.

Conner Bruggen-Cate and Payton Mount scored for Seattle in the loss.

Cole Schwebius stopped 37 of 39 shots against his former team for the victory.