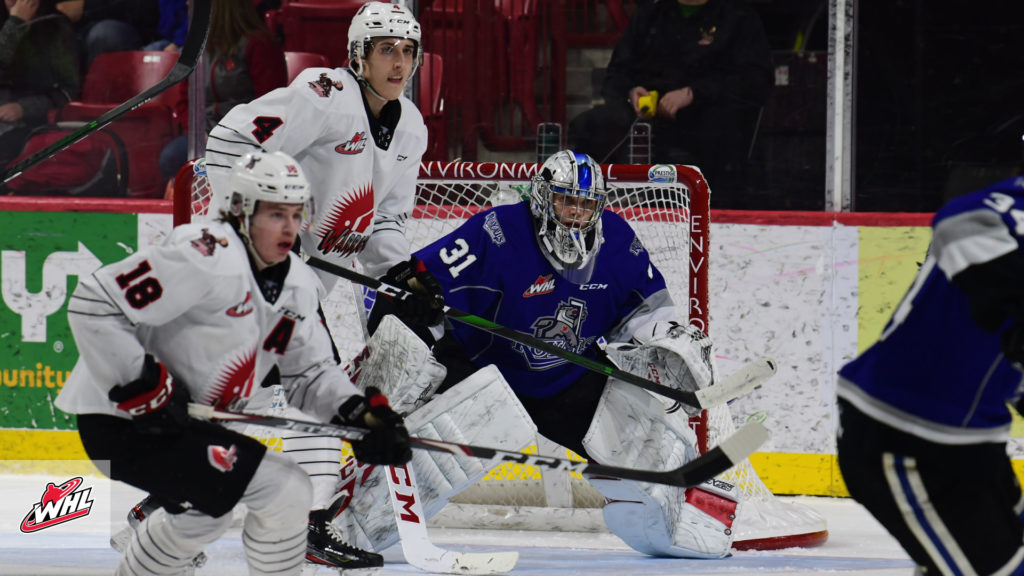 Another 10-game schedule of Western Hockey League action saw the visiting sides control the play with seven of the victories Saturday. Road teams swept all the action in Saskatchewan as the Lethbridge Hurricanes won in Saskatoon, the Victoria Royals took the win in Moose Jaw, and the Prince Albert Raiders claimed a victory in Swift Current. Home sides fared well in Alberta’s two largest cities as the Calgary Hitmen and Edmonton Oil Kings each collected victories. The Brandon Wheat Kings ended their road trip of the Wild Rose province with a win in Medicine Hat. In British Columbia, the Vancouver Giants and Tri-City Americans each claimed wins. The Spokane Chiefs closed out a home-and-home sweep against the Kelowna Rockets on home ice while the Seattle Thunderbirds topped the Portland Winterhawks in a shootout. 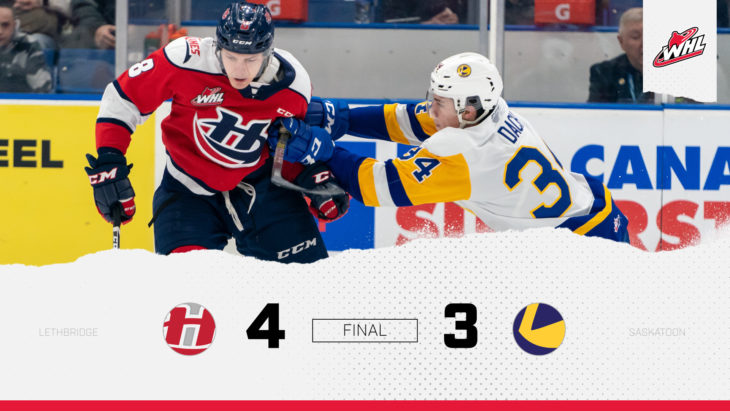 The Lethbridge Hurricanes erupted for three goals in the second period Saturday, holding on for a 4-3 win against the Saskatoon Blades.

Kyle Crnkovic opened the scoring with his 13th of the season, but Brett Davis responded in the final minute of the first to keep things tied through 20 minutes.

Logan Barlage struck 28 second into the middle period, followed by Davis’ second of the game minutes later and a goal from Koletrane Wilson with 4:52 left in the period.

Crnkovic’s second of the night would bring the Blades within two goals late in the second. Colton Dach then had the lone goal of the third to make things interesting, but the home side couldn’t find the equalizer. 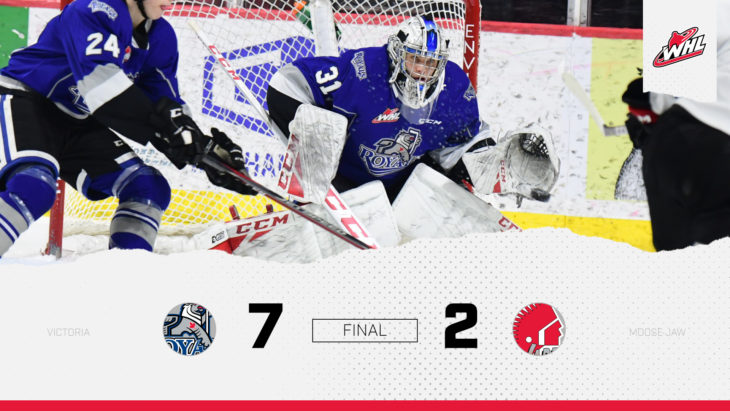 The Victoria Royals closed out their East Division road trip with a 7-2 victory against the Moose Jaw Warriors.

Brandon Cutler and Carson Miller each had a pair of goals and an assist. Goals from Gary Haden, Kaid Oliver, and the first of Riley Gannon’s WHL career also featured in the victory. The Royals scored three times in each of the first and third periods, adding a single goal in the second.

Moose Jaw received goals from Eric Alarie and Kade Runke in the loss.

In his return to Mosaic Place, Brayden Tracey (Anaheim Ducks) was a plus-two with six shots. Adam Evanoff held things together between the pipes with 15 saves for the win. 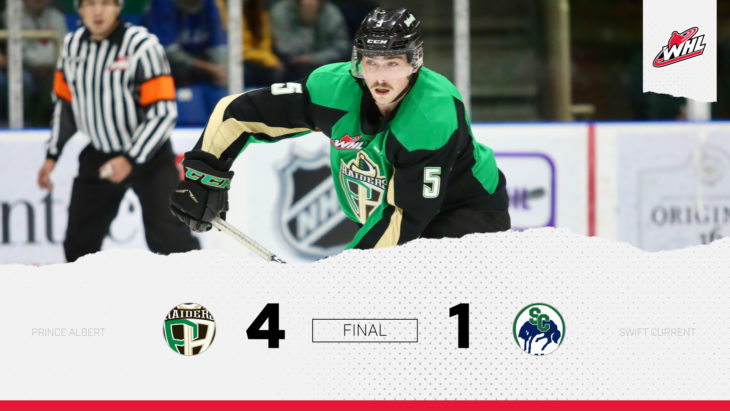 A day after winning at home by a 4-1 score, the Prince Albert Raiders won by the same result, claiming a road win against the Swift Current Broncos Saturday.

The Raiders scored three times in the second as 2020 NHL Draft prospect Ozzy Wiesblatt, captain Zack Hayes, and Jeremy Masella found the back of the net.

Matej Toman broke up the shutout bid in the third while Evan Herman scored into the empty net.

Carter Serhyenko made 23 saves in the victory. 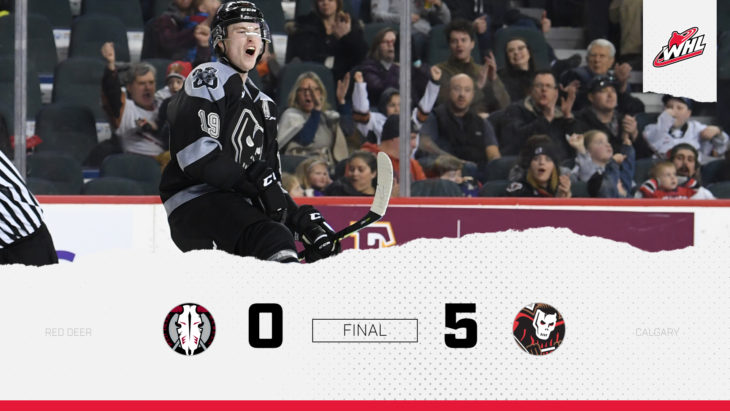 In CHL on Sportsnet action Saturday afternoon, Carson Focht (Vancouver Canucks) and Jackson van de Leest each scored twice in a 5-0 win for the Calgary Hitmen against the Red Deer Rebels.

Connor Gabruch scored the game-winning goal early in the first period. 2020 NHL Draft prospect Jack McNaughton made 14 saves for his first shutout of the season and third of his WHL career.

Jett Woo (Vancouver Canucks) and Orca Wiesblatt each picked up a pair of helpers in the win. 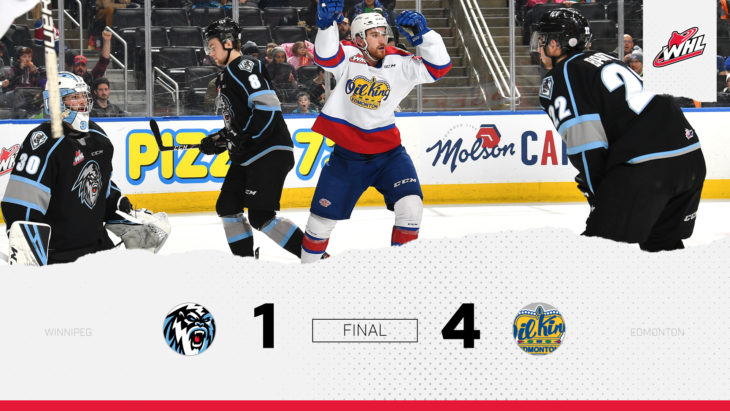 Riley Sawchuk and 2020 NHL Draft prospect Jake Neighbours each recorded a goal and an assist as the Edmonton Oil Kings topped the Winnipeg ICE 4-1 in Alberta’s provincial capital.

Following a scoreless first, 2020 NHL Draft prospect Carter Souch and Sawchuk scored to make it a 2-0 game through 40 minutes. Ethan McIndoe and Michal Teply (Chicago Blackhawks) traded goals early in the third before Neighbours closed out the win with an extra insurance goal late.

Sebastian Cossa made 25 saves for the victory.

Dylan Guenther and Matthew Robertson (New York Rangers) each recorded a pair of assists in the win. 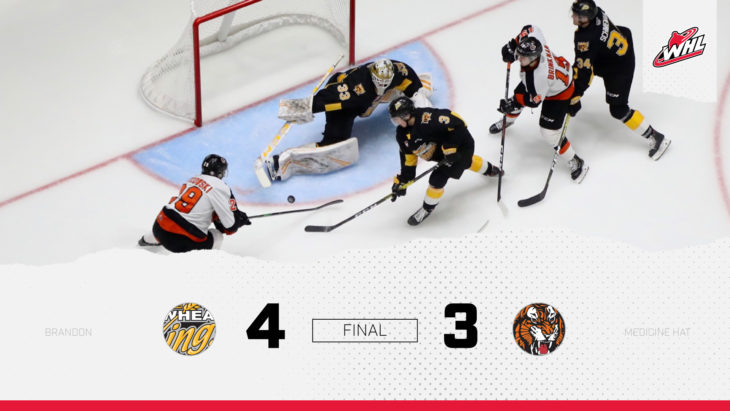 Duncan Pierce had the lone goal through 20 minutes. Bryan Lockner tied the game up in the second, but goals from 2020 NHL Draft prospect Ben McCartney and Vincent Iorio put the Wheaties up by a pair through 40 minutes.

After Luka Burzan (Colorado Avalanche) made it 4-1 in the third, Daniel Baker made it a two-goal game 12 seconds later, followed by a Brett Kemp goal 113 seconds later to bring them within a goal late.

Patera would hold steady in the final minute, making a last-second save to preserve the victory. 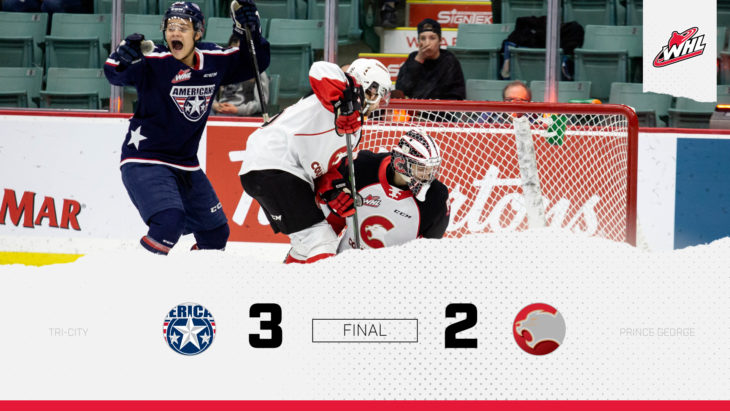 Mason Dunsford made 37 saves for the first win of his WHL career and the Tri-City Americans earned a 3-2 decision against the Prince George Cougars Saturday night in northern British Columbia.

Luke Zazula opened the scoring with the only goal of the first period, but Jonny Hooker and Vladislav Mikhalchuk scored in the second to put the Cougars ahead. The teams would go into the intermission tied though as Daniel Booker beat the goaltender and the buzzer with a last-second goal. 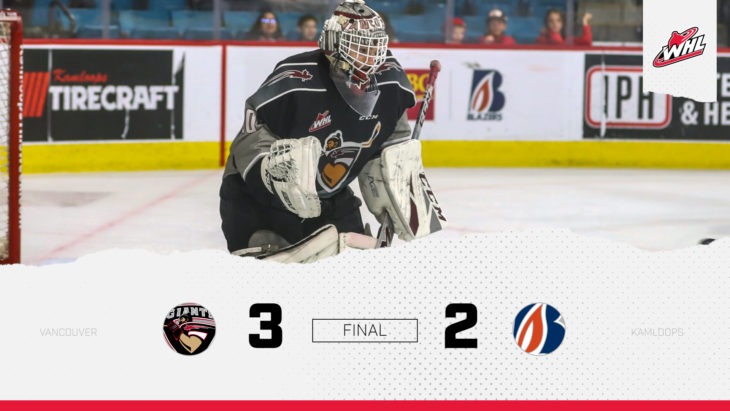 Tristen Nielsen score twice as the Vancouver Giants completed a home-and-home sweep of the Kamloops Blazers with a 3-2 win at the Sandman Centre Saturday.

The 31st goal of the season from 2020 NHL Draft prospect Connor Zary brought the Blazers close midway through the third, but they couldn’t find the equalizer.

David Tendeck (Arizona Coyotes) made 40 saves for the victory. 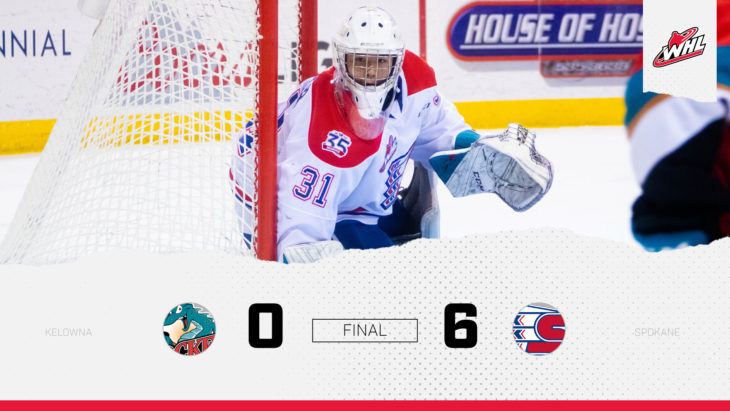 James Porter Jr. made 17 saves against his former team Saturday as the Spokane Chiefs blanked the Kelowna Rockets 6-0.

Another former Rocket in Leif Mattson scored twice against his former club, including the game-winning goal as part of a three-goal first period. Adam Beckman (Minnesota Wild) also scored in the period while Mattson’s second of the game served as the final goal of the opening frame.

Chiefs captain Ty Smith (New Jersey Devils) scored in the second while Luke Toporowski and Brandon Reller struck in the third. Eli Zummack, Filip Kral (Toronto Maple Leafs), and Noah King each had a pair of helpers in the win. 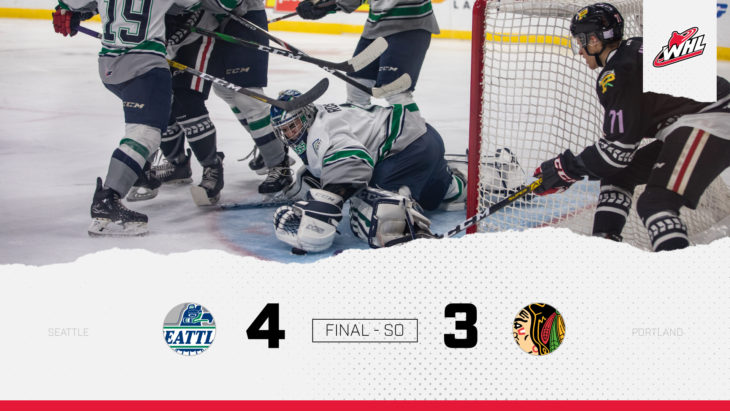 Roddy Ross (Philadelphia Flyers) was at the top of his game Saturday as the Seattle Thunderbirds topped the Portland Winterhawks 4-3 in a shootout.

Ross stopped 43 of 46 shots through 65 minutes before adding three stops on four shooters in the shootout. Matthew Rempe and 2020 NHL Draft prospect Simon Kubicek scored in the deciding part of the game.

Cade McNelly potted a pair of assists in the win.