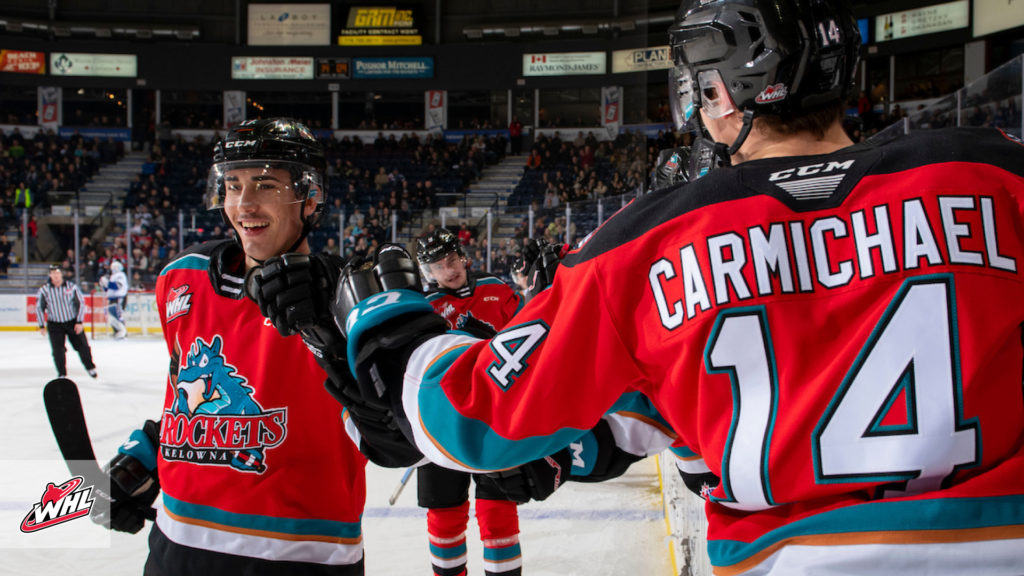 A seven-game slate of action in the Western Hockey League saw offences take control Wednesday. In Saskatchewan’s capital, Ottawa Senators prospect Mark Kastelic posted a pair of goals and four points to lead his Calgary Hitmen squad to a win over the Pats. In Swift Current, the Lethbridge Hurricanes scored three times in the second and twice in the third to top the Broncos. The Prince Albert Raiders began an Albertan road trip on the right foot with a seven-goal performance against the Red Deer Rebels. In British Columbia, the Kamloops Blazers scored a season-high 10 goals in a win against the Seattle Thunderbirds. Down the road, a three-goal second period powered the Kelowna Rockets past the Victoria Royals. In Washington state, the Spokane Chiefs used a two-goal effort from defenceman Bobby Russell to top the visiting Saskatoon Blades in a rare meeting. In Oregon, Jake Gricius provided the difference for the Portland Winterhawks as they earned another victory on home ice, this time against the Vancouver Giants. 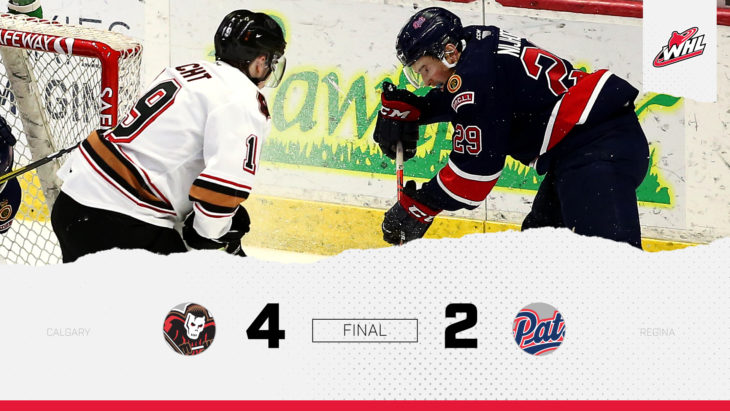 Led by captain Mark Kastelic (Ottawa Senators), the Calgary Hitmen doubled up the Regina Pats by a 4-2 score Wednesday to continue their winning ways in Saskatchewan’s capital.

Regina took the lead after 20 minutes as captain Austin Pratt netted his ninth of the season. The two teams then traded goals early in the second as Jett Woo (Vancouver Canucks) tied up the game 15 seconds into the frame followed 24 seconds later by Ty Kolle’s eighth of the campaign.

Kastelic would strike twice 61 seconds apart later on in the period to put the visitors in front for good. Riley Stotts (Toronto Maple Leafs) scored the lone goal of the third. In addition to his pair of goals, Kastelic assisted on the other two Calgary goals for the four-point night. 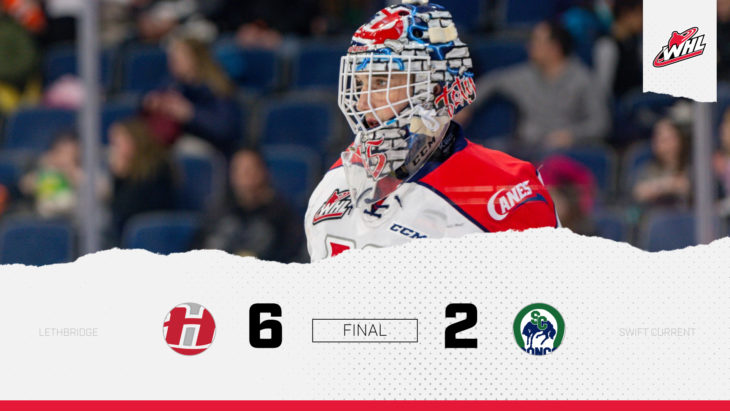 Six different Lethbridge Hurricanes skaters found the back of the net Wednesday in a 6-2 win over the Swift Current Broncos.

The Hurricanes rolled to victory as Dylan Cozens (Buffalo Sabres) scored in the first followed by strikes from Alex Cotton, Logan Barlage, and 2020 NHL Draft prospect Noah Boyko in the second. D-Jay Jerome and the first goal of Trevor Thurston’s WHL career featured in the third.

Zack Stringer had himself a night with three assists while Dino Kambeitz picked up a pair of helpers. Broncos captain Ethan Regnier and Aiden Bulych scored for Swift Current in the loss. Carl Tetachuk stopped 15 of 17 shots between the pipes for the Hurricanes. 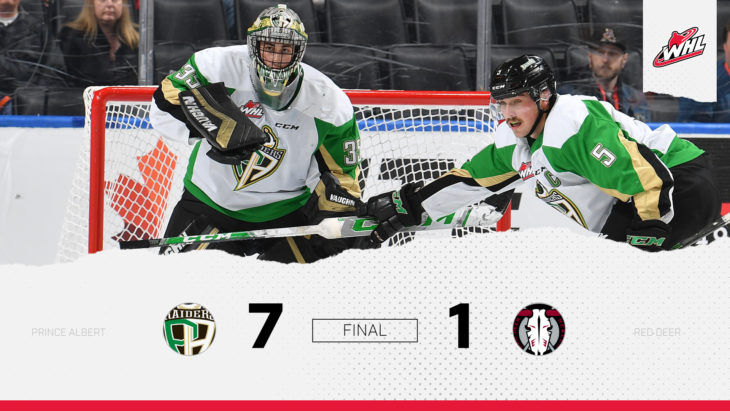 The Prince Albert Raiders began a three-game road trip through Alberta by setting a team-high for most goals in a single road game this season, downing the Red Deer Rebels 7-1.

Prince Albert scored once in the first, twice in the second, and four times in the third.

Herman added a pair of helpers to finish with three points while Protas and Moe each had a goal and an assist in the contest. 2020 NHL Draft prospect Landon Kosior assisted on a pair of goals in the win.

Boston Bilous stopped 24 of 25 shots for the victory. 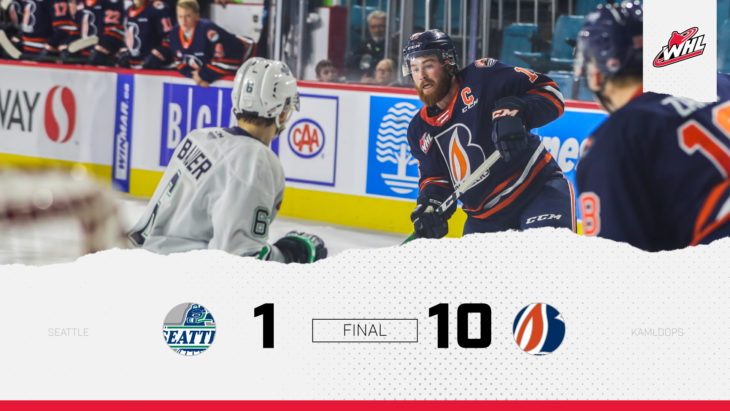 The Kamloops Blazers put up a season-high 10 goals on home ice in a rout of the Seattle Thunderbirds Wednesday night.

2020 NHL Draft prospect Connor Zary led the way with a hat trick while defenceman Max Martin collected four assists. Captain Zane Franklin and Montana Onyebuchi each scored twice while Ryan Hughes and Martin Lang finished with a goal and three points each. Logan Stankoven also chipped in a goal and an assist.

Keltie Jeri-Leon had the lone strike for the T-Birds. Kamloops scored once in the first, five times in the second, and four times in the third. 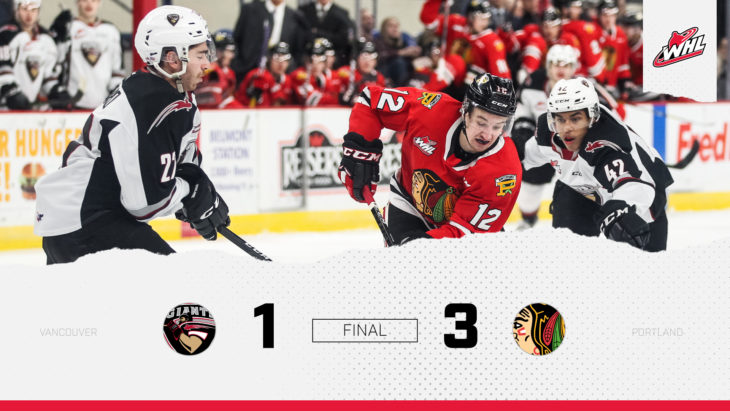 Kishaun Gervais and Jake Gricius scored in the first period to keep the Winterhawks in front throughout the game. Bowen Byram (Colorado Avalanche) scored for the Giants in the second, but that’s as close as they’d come. A late goal by Gricius gave him two on the night to close out the win. 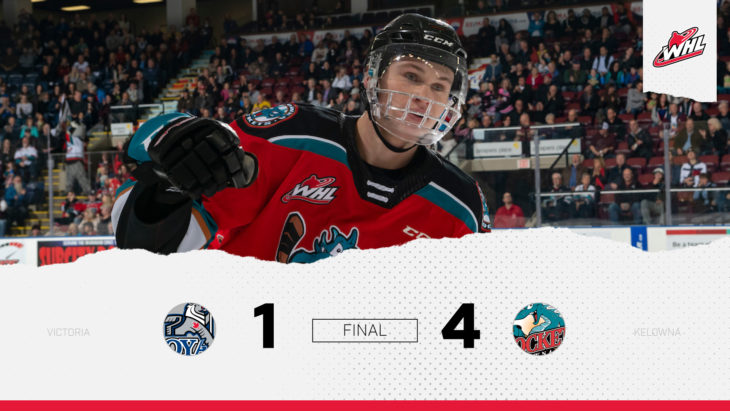 A three-goal second period powered the Kelowna Rockets to a 4-1 win on home ice Wednesday against the visiting Victoria Royals.

Kaedan Korczak (Vegas Golden Knights) and Michael Farren each had a goal and an assist while Roman Basran stopped 26 of 27 shots.

Alex Swetlikoff and Jake Lee also found the back of the net in the victory, with Lee getting credit for the game-winning goal.

Sean Gulka had the lone goal for the Royals in the loss. 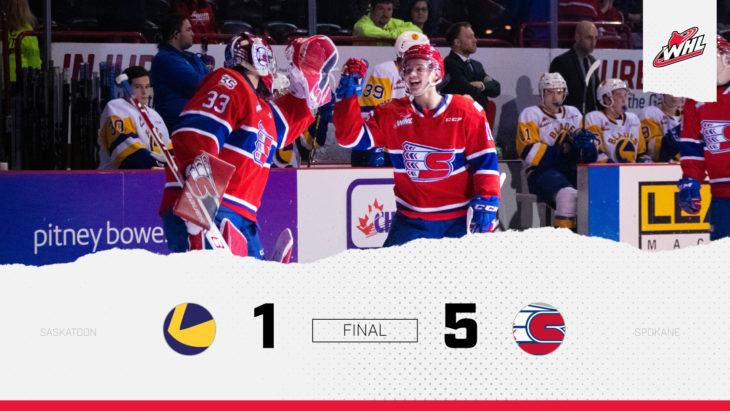 The Spokane Chiefs defended home turf against the Saskatoon Blades, topping their visitors from the north by a 5-1 final.

Spokane scored once in each of the first and third periods, while striking three times in the second. Larson and Beckman each added an assist to their goals for the multi-point performances.

2020 NHL Draft prospect Jack Finley recorded a pair of assists in the contest.

In net, Lukáš Pařík (Los Angeles Kings) stopped 28 of 29 shots for the win. Tristen Robins broke up the shutout late to get the Blades on the board.