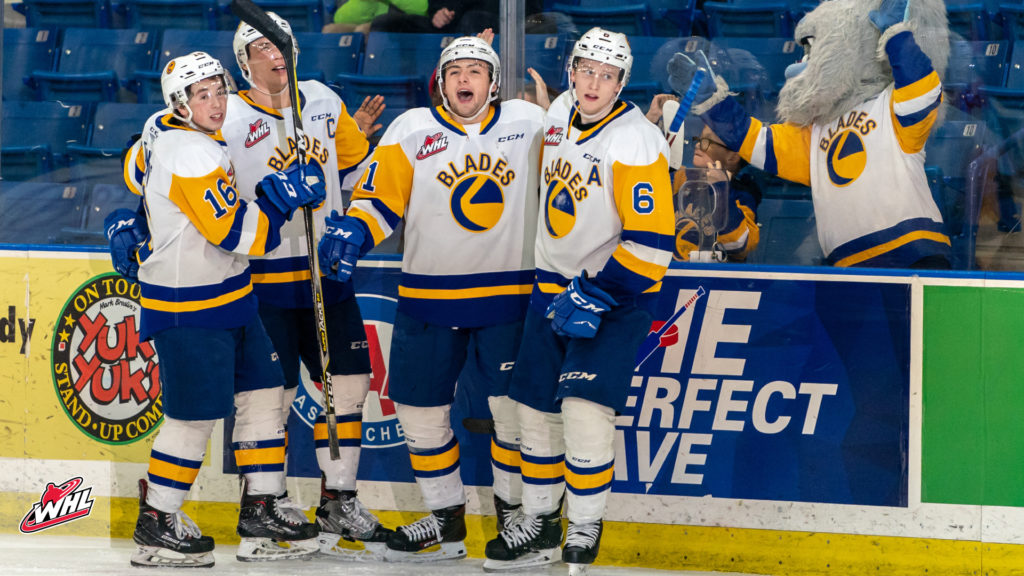 An eight-game schedule of Western Hockey League action featured Friday night. The evening’s action saw a trio of teams continue their impressive streaks as the Portland Winterhawks extended their run to 20 game without a regulation defeat while the Brandon Wheat Kings made it 10 in a row and the Blazers made it nine. The Raiders picked up a win over the Edmonton Oil Kings to move to 4-0-1-2 in their past seven games. In an 11-goal contest, the Saskatoon Blades got the better of the Medicine Hat Tigers while the Moose Jaw Warriors claimed a win in a Trans-Canada clash against the Swift Current Broncos. The Lethbridge Hurricanes found success in Saskatchewan for a second-straight game, topping the Regina Pats. Out in British Columbia, the Kelowna Rockets returned to the win column with an overtime victory against the Seattle Thunderbirds. 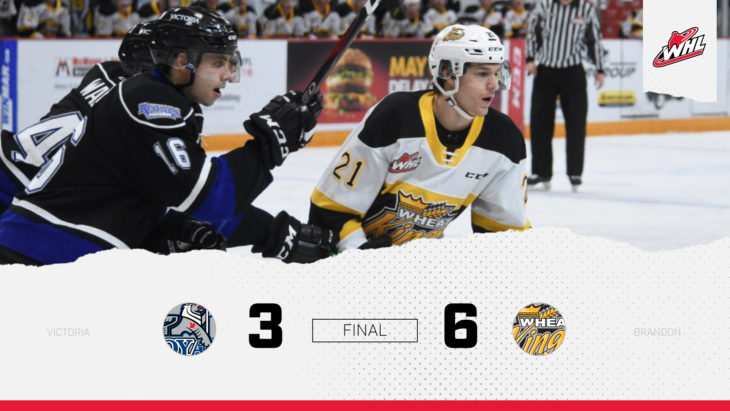 The Brandon Wheat Kings doubled up the Victoria Royals by a 6-3 score at Westoba Place to earn their 10th-straight victory Friday night.

Luka Burzan (Colorado Avalanche) scored twice while Vincent Iorio and 2020 NHL Draft prospect Ridly Greig each had a goal and an assist. Lynden McCallum and Cole Reinhardt also scored in the win. Brandon scored four times in the first and twice in the third.

The Royals made things interesting with goals by Brayden Tracey (Anaheim Ducks), Kaid Oliver, and Gary Haden, but couldn’t pull even for the rest of regulation.

Jiri Patera (Vegas Golden Knights) made 45 saves for the win. 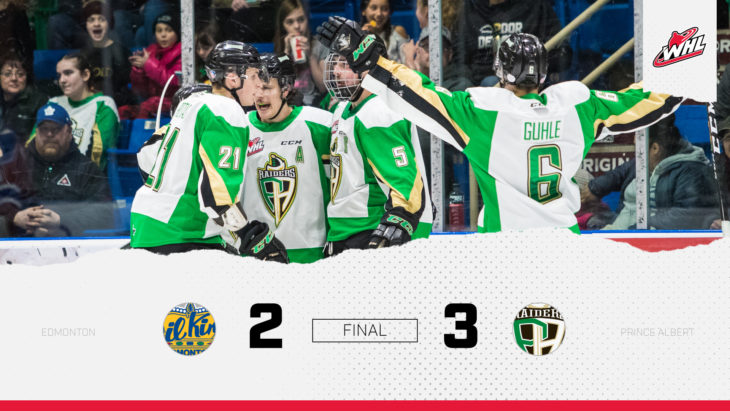 Brayden Watts’ 19th goal of the season lifted the Prince Albert Raiders to a 3-2 win against the visiting Edmonton Oil Kings Friday night at the Art Hauser Centre.

Matthew Culling and 2020 NHL Draft prospect Landon Kosior put the Raiders up 2-0 through 20 minutes. Josh Williams cut the Raiders’ lead in half through 40 minutes while Watts and Dylan Guenther traded goals in the final period of regulation.

Max Paddock made 30 saves for the victory. 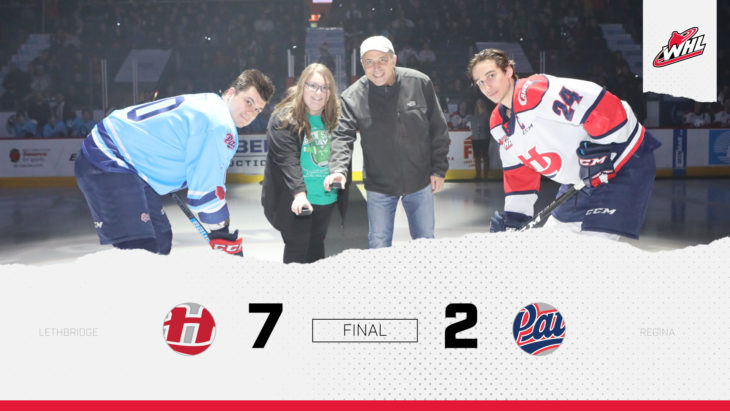 The Lethbridge Hurricanes posted their second-straight seven goal game Friday, topping the Regina Pats by a 7-2 result at the Brandt Centre.

Continuing his standout season, 2020 NHL Draft prospect Alex Cotton tallied a pair of goals as part of a three-point night from the blue line while Zack Stringer posted a goal and an assist.

The Hurricanes spread out their offence with three goals in the first, followed by a pair in each of the second and third periods. Zach Wytinck and Robbie Holmes scored for the Pats.

Carl Tetachuk made 20 saves for the win.

A five-point night from Kyle Crnkovic and the first hat trick of Tristen Robins’ WHL career propelled the Saskatoon Blades to a 6-5 win over the Medicine Hat Tigers Friday night.

The Tigers strolled out to a 3-0 lead by just past the midway point of the second period on the strength of goals by captain James Hamblin, Daniel Baker and Baxter Anderson. However, that would spark the Blades, with Robins, Crnkovic, and captain Chase Wouters tying up the game by the end of the middle frame.

Goals from Riley McKay and Robins in the opening two minutes of the third period put the Blades ahead. Corson Hopwo would bring the Tigers within a goal for a few minutes until Robins completed his hat trick with the game-winning goal. Nick McCarry scored late to make the game interesting, though the Tigers would ultimately fall short by a single goal.

2020 NHL Draft prospect Koen MacInnes made 28 saves for the victory. 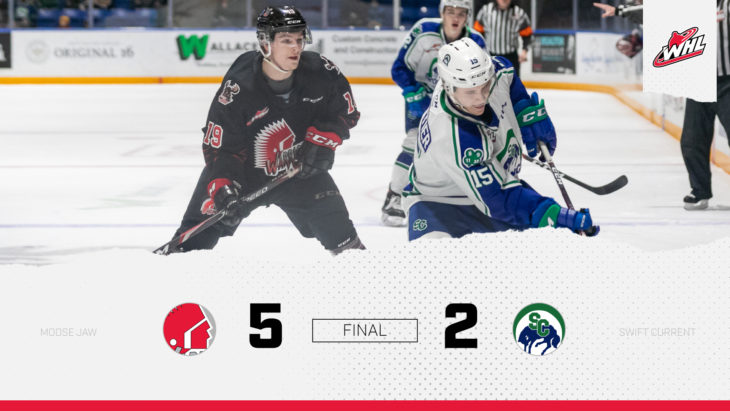 In another edition of the Trans-Canada clash, the Moose Jaw Warriors took down the Swift Current Broncos by a 5-2 score.

Captain Owen Hardy, Martin Lang, and Cayde Augustine each had a goal and an assist in the victory for the Warriors. Boston Bilous made 40 saves for the win between the pipes.

A pair of milestone moments featured for the Warriors, with Jagger Firkus and hometown product Atley Calvert each notching the first goals of their respective WHL career.

Matthew Benson and Kaleb Bulych scored for the Broncos in the loss. 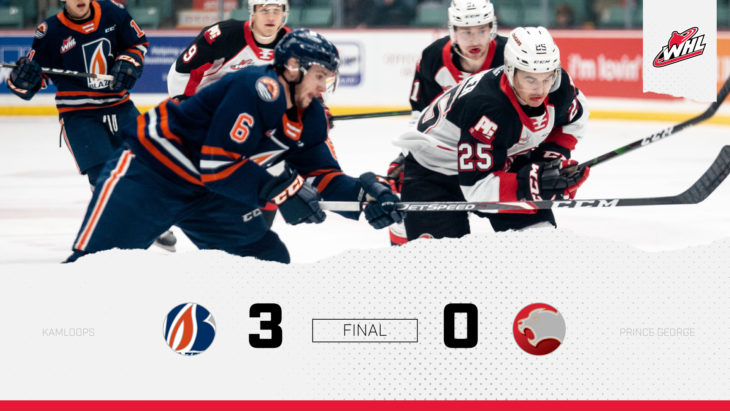 2020 NHL Draft prospect Dylan Garand made 27 saves and the Kamloops Blazers recorded their third-consecutive shutout Friday via a 3-0 decision over the Prince George Cougars.

A pair of goals from 2020 NHL Draft prospect Josh Pillar and an empty-net goal from Caedan Bankier accounted for all the offence in regulation. Garand made 14 saves in the first, six in the second, and seven in the third for his fourth shutout of the season. 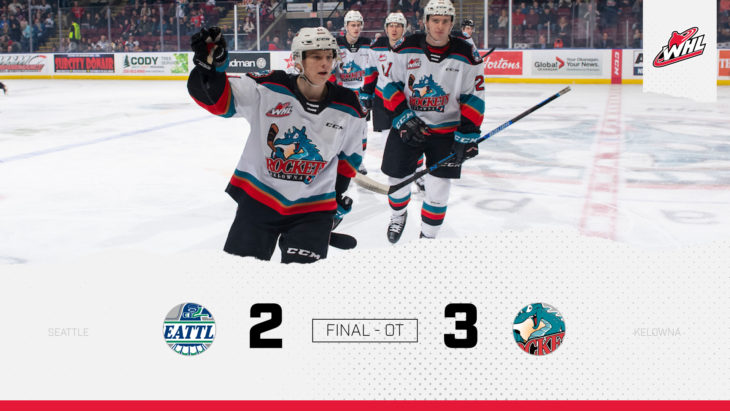 Matthew Wedman (Florida Panthers) earned his 11th goal of the season 3:58 into overtime against his former team, lifting the Kelowna Rockets to a 3-2 win over the Seattle Thunderbirds.

2020 NHL Draft prospect Pavel Novak and Conner Roulette traded goals in the first period. Max Patterson gave the visitors a lead in the second, but Mark Liwiski tied the game late after tipping a shot from Sean Comrie to force overtime, where Wedman would provide the clincher.

Former Thunderbird Cole Schwebius stopped 30 of 32 shots for the win. 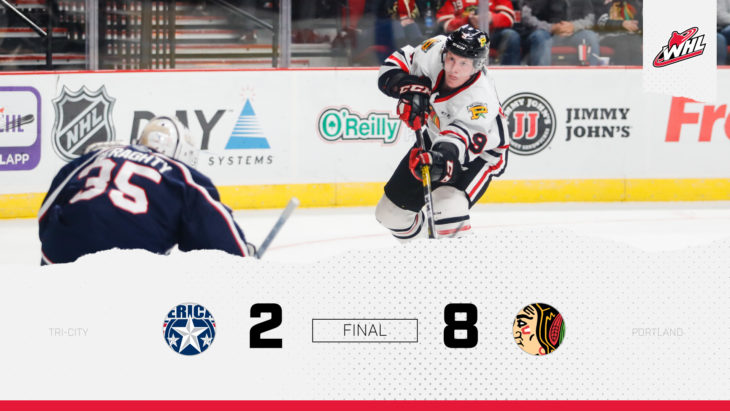 A five-point night from 2020 NHL Draft prospect Seth Jarvis and four points from Jaydon Dureau powered the Portland Winterhawks to an 8-2 win over the Tri-City Americans Friday at the Mode Center.

Reece Newkirk (New York Islanders), Nick Cicek, and Jack O’Brien each tallied a goal and an assist while Jake Gricius and 2020 NHL Draft prospect Simon Knak also got in on the scoring fun.

After scoring five goals in the first period, Portland tallied twice in the second and once in the third. Krystof Hrabik and Blake Stevenson scored for the Americans in the loss.

Joel Hofer (St. Louis Blues) earned the win between the pipes for Portland.