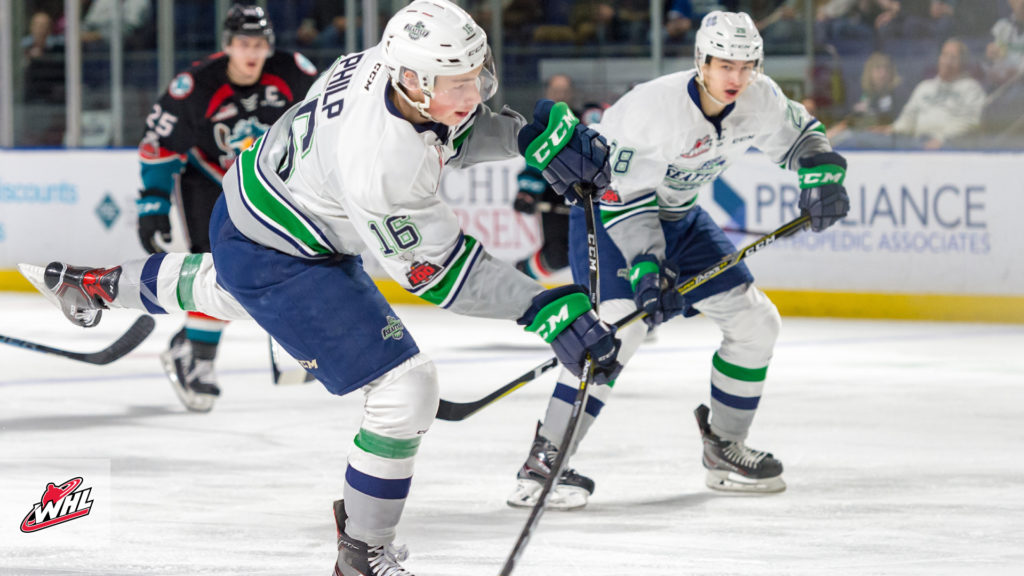 1. Noah Philp, Seattle Thunderbirds: The 20-year-old product of Canmore, Alta., exploded in a big way on Wednesday evening, registering his first four goals of the season in a 9-6 victory over the Kelowna Rockets.

Philp’s eight points on the year leave him tied with Zack Andrusiak for second on the Thunderbirds in scoring, trailing 17-year-old Dillon Hamaliuk and his 11 points (5G-6A).

Wednesday’s win helped the T-Birds improve to 4-1-1-0, good enough for second position in the U.S. Division.

2. Joachim Blichfeld, Portland Winterhawks: The 20-year-old prospect of the San Jose Sharks – who leads the WHL in goal scoring with eight markers – showed he isn’t just a one-trick pony on Wednesday evening. The product of Frederikshavn, Denmark, registered five assists – three of the primary variety ­– as the Winterhawks soared to an 8-2 triumph over the visiting Edmonton Oil Kings.

Blichfeld’s performance boosted him into sole possession of the WHL scoring lead with 22 points (8G-14A) in only eight contests.

3. Cody Glass, Portland Winterhawks: The 19-year-old prospect of the Vegas Golden Knights secured four points – two goals and two assists – as he did his best to keep pace with teammate Joachim Blichfeld.

Glass opened the scoring in the first period before adding a shorthanded tally in the second period. Two primary helpers rounded out a quality evening for the product of Winnipeg, who is tied with Blichfeld for the WHL lead in assists (14).

The performance of Glass contributed to the Winterhawks moving to 5-2-0-1, maintaining control of the U.S. Division lead. 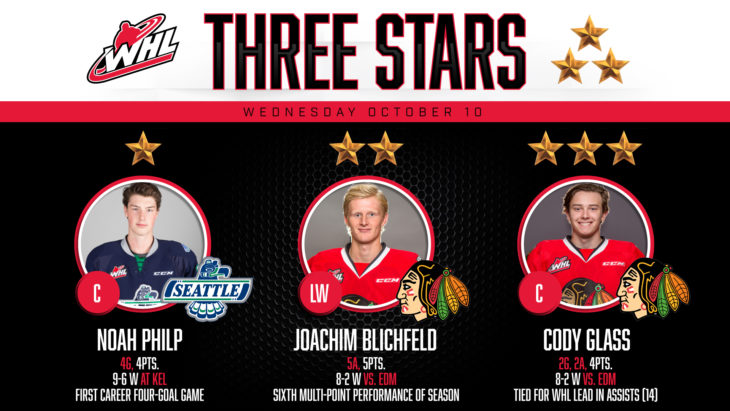 Ty Kolle’s third game in a Lethbridge Hurricanes uniform was a productive one as he scored twice in a 4-2 victory for the Hurricanes over the Regina Pats Wednesday.

It was Regina scoring first in Wednesday’s contest though as Riley Krane got the visiting side on the board 94 seconds into the opening period, banging home the puck following a rebound from a shot from Logan Nijhoff. Jake Elmer tied up the game just after the media timeout in the period, creating free space for himself in the slot, taking the feed, and wiring the puck past Max Paddock.

Kolle’s first of the game came on the power play 5:35 into the second as he picked up the puck off a shot attempt and beat Paddock from a short angle. 2019 NHL Draft prospect Dylan Cozens picked up the game-winning goal, tipping a point shot from Calen Addison (Pittsburgh Penguins).

Robbie Holmes and Kolle’s second of the game featured in the third as the Pats got close, only to slip back into the two-goal deficit minutes later.

Holmes added an assist to his goal for the multi-point effort while Nijhoff, Nick Henry (Colorado Avalanche), and Austin Pratt picked up single assists.

Reece Klassen stopped 24 of 26 shots in the victory.

Noah Philp led the offensive charge Wednesday night as the Seattle Thunderbirds kept the lamp lit near-constantly in a 9-6 over the Kelowna Rockets at Prospera Place.

Philp scored Seattle’s first, third, fourth, and eighth goals in the game in the wild 15-goal affair. Philp and Andrej Kukuca scored 82 seconds apart in the first half of the first period. 2019 NHL Draft prospect Nolan Foote responded 13:28 into the opening period with his third of the season, but the Thunderbirds would never cede control of the lead Wednesday.

Philp added goals 62 seconds apart later in the period and Leif Mattson tallied his seventh of the season to make it a 4-2 contest late in the opening period. If the six goals weren’t enough offence already, Zack Andrusiak scored with eight seconds to go in the opening period, giving the Thunderbirds a 5-2 advantage after 20 minutes.

Tyler Carpendale, Payton Mount, Owen Williams, and Samuel Huo each picked up a single assist in the victory.

Leading Kelowna was Mattson’s four-point game while 2019 NHL Draft prospect Kyle Topping added four assists. Both Foote and Bruggen-Cate had a goal and an assist in the contest.

A four-point game from Cody Glass (Vegas Golden Knights) and a five-assist performance from Joachim Blichfeld (San Jose Sharks) powered the Portland Winterhawks to an 8-2 win over the Edmonton Oil Kings Wednesday.

The eight-goal output was the first time the Winterhawks had reached that number in all of 11 regular season games dating back to a March 16, 2018 thrashing of the Seattle Thunderbirds by a 8-3 score.

Goals from newly-minted captain Glass and Reece Newkirk featured in the first 20 minutes. Oil Kings captain Trey Fix-Wolansky got the Oil Kings back into the game eight seconds into the second period, but the Winterhawks were just getting started. Goals from Ryan Hughes and Mason Mannek came 53 seconds apart roughly two-and-a-half minutes after Fix-Wolansky’s goal. Glass tallied his second of the game before the media timeout in the second to make it a 5-1 contest halfway through the game. Scott Atkinson got one back for the Oil Kings, but Michal Kvasnica’s first career WHL goal restored the Winterhawks’ lead to four after 40 minutes.

Jake Gricius’ fifth of the season and a beautiful bat-in goal from Cross Hanas for his first career WHL goal made it an 8-2 final.

In addition to his goal, Newkirk added a pair of assists for the three-point night while rookie Seth Jarvis had a pair of assists himself. Hughes and Hanas each added an assist to their goals for the mui-point performance as 10 different Winterhawks recorded a point in the victory. Jaydon Dureau picked up his third point of the season with a single assist in the game.