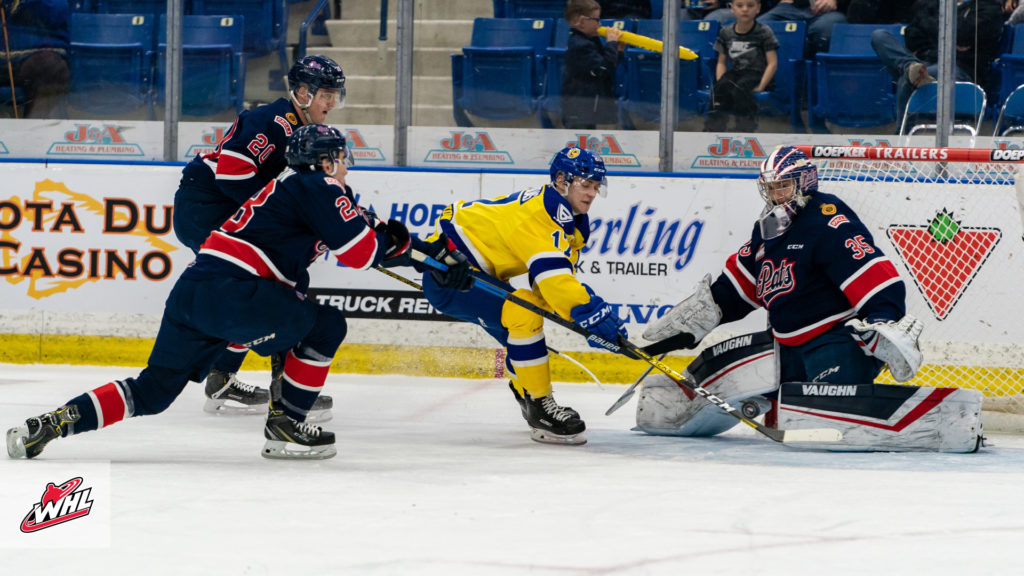 A five-game schedule of action in the Western Hockey League saw four one-goal contests feature, with three of those settled in extra time. In Manitoba’s capital, the Winnipeg ICE returned home and claimed a win against the Moose Jaw Warriors. One province over, the Regina Pats extended their winning streak to three games with a shootout win against the Saskatoon Blades. In Alberta, the Prince Albert Raiders and Lethbridge Hurricanes used late-game heroics from Aliaksei Protas and Brett Davis, respectively, to score their victories. Closing out a mid-week set in northern British Columbia, the Prince George Cougars topped the Seattle Thunderbirds in the shootout. 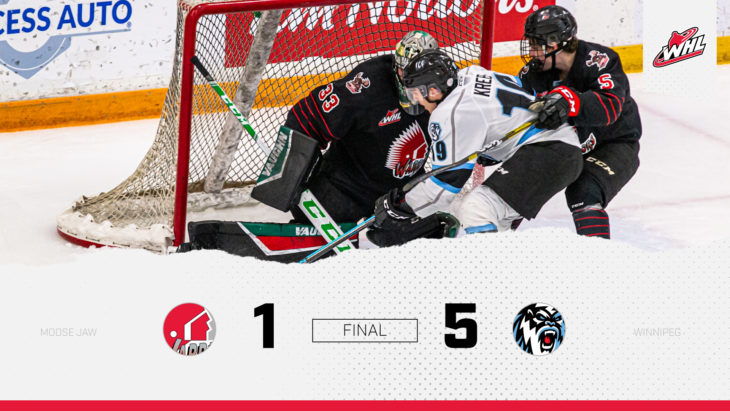 The Winnipeg ICE made a return home and a return to the win column Wednesday with a 5-1 victory against the Moose Jaw Warriors.

A natural hat trick from Jackson Leppard and a four-point game from Isaac Johnson led the way for the ICE in the contest.

Johnson opened the scoring in the second and later made a sweet dish to captain Peyton Krebs (Vegas Golden Knights), who doubled his team’s lead.

Kyle Crosbie put the Warriors on the board minutes later, but Leppard’s first of the night would restore the two-goal advantage by the end of the second period.

In the third, Leppard added goals two and three of the night to complete his hat trick. Michael Milne tallied a pair of assists in the win.

Liam Hughes made 25 saves on 26 shots for the victory. 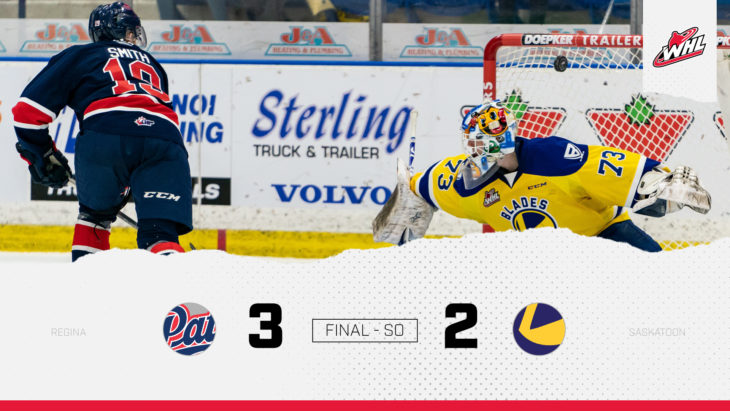 Riley Krane opened the scoring 44 seconds into the game. That lead would last until midway through the second when Martin Fasko-Rudas put the Blades on the board. Just 82 seconds after Saskatoon tied it up though, Drew Englot put the Pats ahead again.

Jayden Wiens would redirect the puck into the net for his sixth of the season to tie up the game in the third, forcing extra time.

Things would spill over into the shootout, where Carson Denomie and Zack Smith scored to secure the win for the Pats. 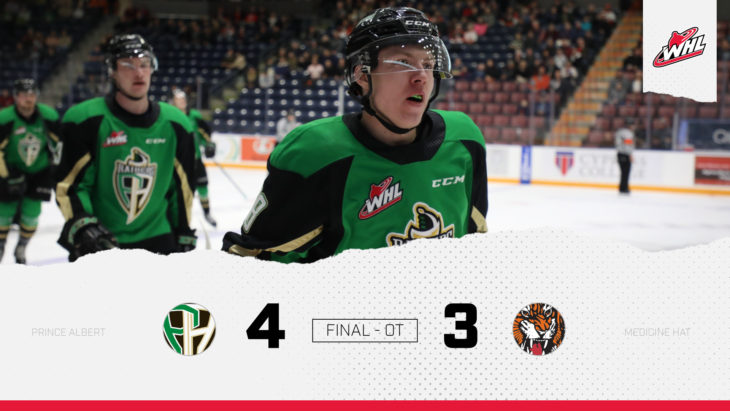 McCarry’s second of the night with 4:28 left in regulation looked to be the decisive goal in the contest until Protas tapped in the puck off a last-chance rush with the goalie pulled. Off the opening face-off in overtime, the Raiders capitalized off a turnover just inside the blue line and the ensuing odd-man rush featured Brayden Watts setting up Protas for the game-winning goal. 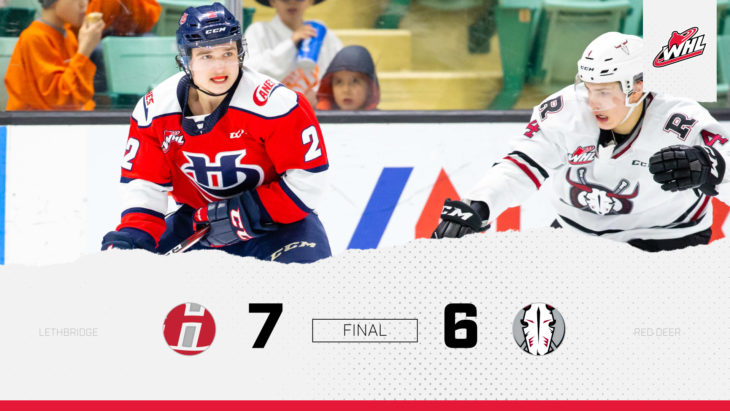 Trailing 4-1 midway through regulation, the Lethbridge Hurricanes surged back to win a 7-6 game against the Red Deer Rebels Wednesday in central Alberta.

Former Rebel Brett Davis provided the dagger, scoring twice in the final five minutes of the third to tie up the game and then provide the game-winning goal.

The comeback began exactly 71 seconds later as Logan Barlage closed the gap to two, followed by goals from Jett Jones and co-captain Dylan Cozens (Buffalo Sabres) to tie up the game through 40 minutes.

Red Deer retained control of the game in the first half of the third as a goal from Zak Smith and King’s second of the night bookended a goal by Hurricane co-captain Ty Prefontaine. Davis then took over in the final five minutes, tallying twice to allow the Hurricanes to leapfrog the Rebels on the scoreboard.

Splitting the game in net, 2020 NHL Draft prospect Bryan Thomson earned the win between the pipes. 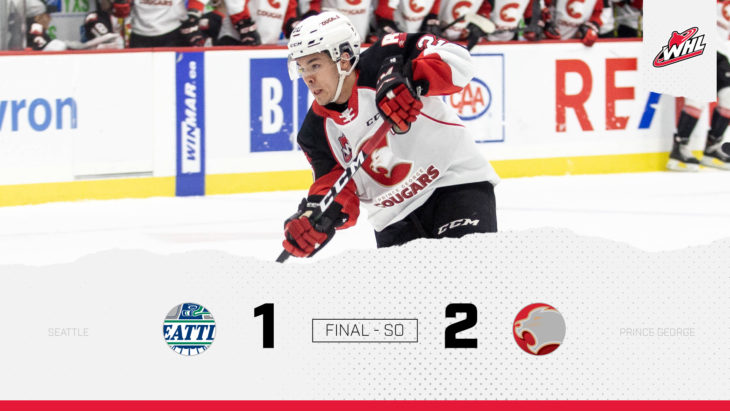 2020 NHL Draft prospect Taylor Gauthier made 34 saves through regulation and overtime before added three more denials in the shootout as the Prince George Cougars topped the Seattle Thunderbirds 2-1.

The win gave the Cougars a sweep of the two-game mid-week set between the two clubs.

Andrej Kukuca scored in the first and Ilijah Colina struck back in the second to account for the only goals through 65 minutes of game play.

Vladislav Mikhalchuk and Cole Moberg (Chicago Blackhawks) scored to provide the offensive difference in the shootout.