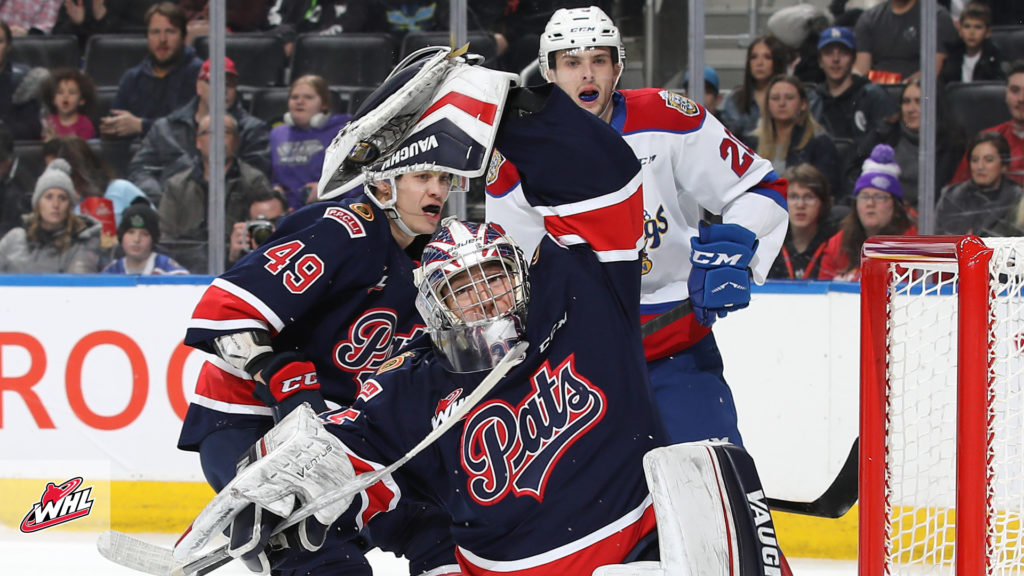 A nine-game schedule of action provided plenty of excitement Friday night across the Western Hockey League. The Brandon Wheat Kings completed a home-and-home sweep of the Saskatoon Blades in Manitoba. In Saskatchewan, the Prince Albert Raiders shutout the visiting Swift Current Broncos. The Regina Pats took down the conference-leading Edmonton Oil Kings to wrap up their Albertan road trip while the Lethbridge Hurricanes used a Dylan Cozens hat trick to top the Winnipeg ICE. The Kamloops Blazers and Vancouver Giants each scored five times to find their way to home victories. South of the border, the Everett Silvertips locked up a spot in the 2020 WHL Playoffs while the Portland Winterhawks delivered a clinical victory against the Spokane Chiefs. In Kennewick, Sasha Mutala completed his hat trick with 0.5 seconds left in regulation to top the Moose Jaw Warriors. 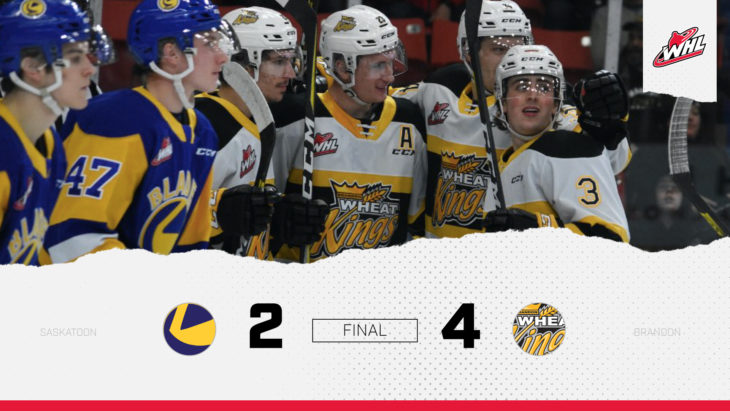 Goals from Cole Reinhardt, Burzan, and Pierce’s first of the game featured in a three-goal first period.

Kyle Crnkovic and Zach Huber brought the Blades within a goal through 40 minutes, but Pierce would tally the only goal of the third into an empty net in the final minute of regulation.

Jiri Patera (Vegas Golden Knights) made 36 saves in the win. 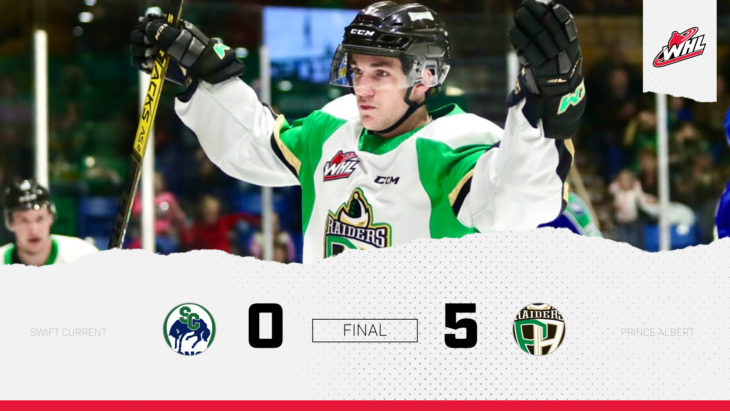 Aliaksei Protas (Washington Capitals) led the offensive charge with a goal and three points. Michael Horon and 2020 NHL Draft prospect Ilya Usau scored in the first. Protas, Matthew Culling, and Brayden Watts struck in the second for the home side.

2020 NHL Draft prospect Ozzy Wiesblatt collected a pair of assists in the contest. 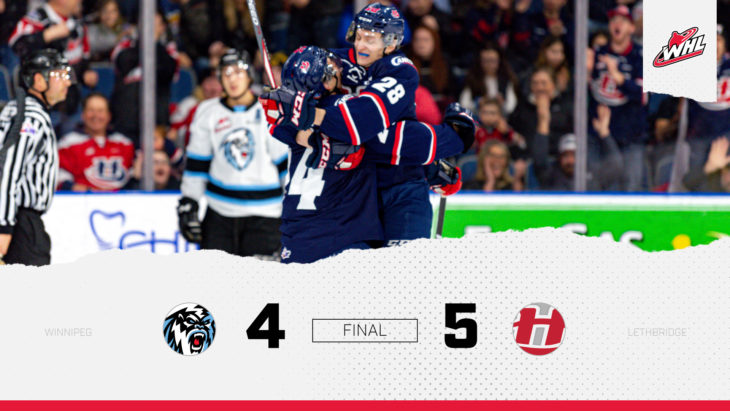 Lethbridge Hurricanes co-captain Dylan Cozens (Buffalo Sabres) tallied the fifth hat trick of his WHL career in a 5-4 win for the Hurricanes against the visiting Winnipeg ICE.

Michal Teply (Chicago Blackhawks) opened the scoring in favour of the ICE, but Cozens struck 15 seconds later to tie the game and then scored 87 seconds after that to put the Hurricanes ahead.

Dino Kambeitz scored the only goal of the second and 2020 NHL Draft prospect Alex Cotton struck early in the third to make it a 4-1 score before goals from Teply and Cole Muir cut the deficit to one.

Cozens extended the lead to two with his hat-trick goal late in the third. While 2020 NHL Draft prospect Owen Pederson brought the game to within a goal again, Carl Tetachuk would close the door down the stretch to preserve the win, finishing with 22 saves.

Calen Addison (Minnesota Wild) added a pair of assists in the victory. 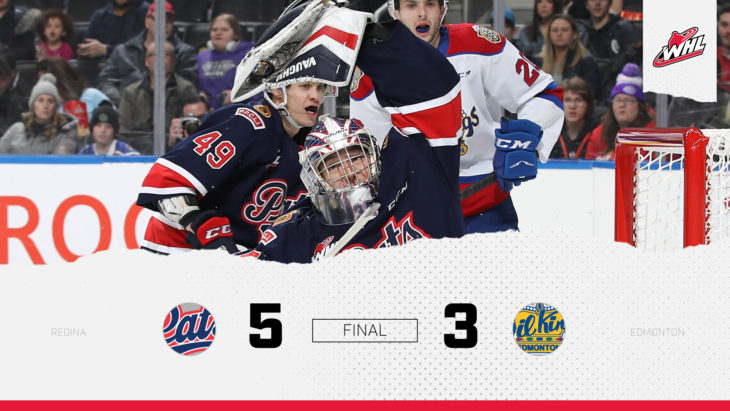 The Regina Pats didn’t back down against the conference-leading Edmonton Oil Kings and came away with a well-earned 5-3 win Friday night in Alberta’s capital.

Matthew Robertson (New York Rangers) opened the scoring for the home side, but goals from Riley Krane and Cole Dubinsky made it a 2-1 score for the visitors through 20 minutes. The second period saw the Pats retain control of the lead as Logan Nijhoff and Oil Kings captain Scott Atkinson traded goals.

In the third, Ryker Evans notched his sixth of the season and Nijhoff’s second of the game went into the empty net late while Logan Dowhaniuk’s first goal of the season featured for Edmonton.

Donovan Buskey made 36 saves for the win.

Krane finished with a goal and four points while Sherwood Park, Alta. product Robbie Holmes tallied four assists in the final visit to Edmonton of his WHL regular season career. 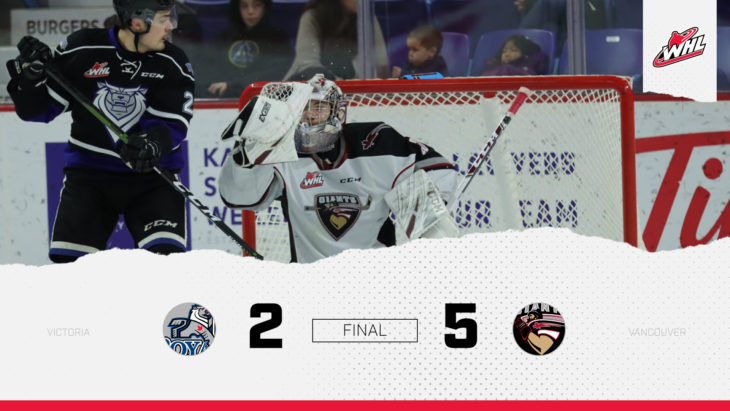 2020 NHL Draft prospect Justin Sourdif scored twice and factored into his team’s first four goals as the Vancouver Giants pushed their winning streak to eight games with a 5-2 victory over the Victoria Royals.

Carson Miller had the only goal of the first period to give the Royals an early lead, but the Giants struck back in the second with goals by Tristen Nielsen and a pair from Sourdif to lead 3-1 after 40 minutes.

Gary Haden brought the Royals within a goal midway through the third, but goals from Milos Roman (Calgary Flames) and Bowen Byram (Colorado Avalanche) closed out the victory.

David Tendeck (Arizona Coyotes) made 24 saves for the victory.

Roman and Byram each finished with multi-point games. 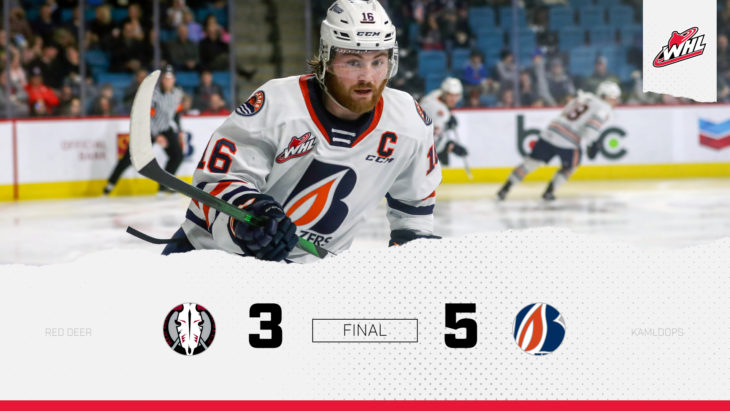 Kamloops Blazers captain Zane Franklin had his 27th goal of the season stand up as the game-winning goal in a 5-3 victory over the visiting Red Deer Rebels.

Orrin Centazzo scored his 37th and 38th goals of the season while Brodi Stuart’s seventh of the campaign kept the Blazers and Rebels in a 3-3 deadlock through 40 minutes. Goals from Cameron Hausinger, Arshdeep Bains, and Josh Tarzwell featured in the first two periods for the Rebels.

Franklin broke the tie 5:52 into the third and Logan Stankoven added an insurance goal later in the period.

Rayce Ramsay made 19 saves in the winning performance. 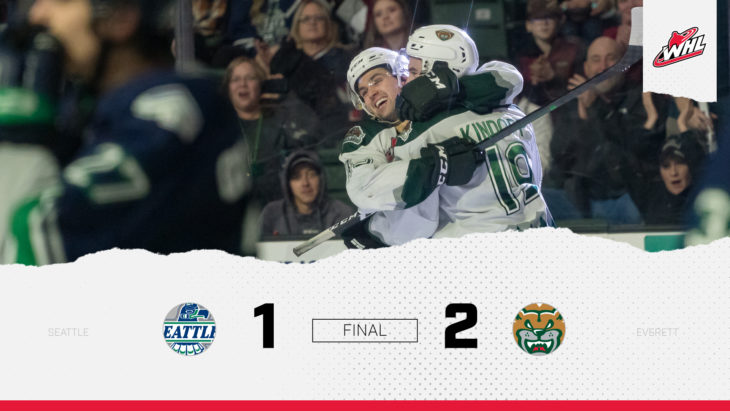 The Everett Silvertips doubled up the Seattle Thunderbirds 2-1 Friday to clinch a spot in the 2020 WHL Playoffs.

Opening the scoring was Ty Kolle, who struck 68 seconds into the first period. Matthew Rempe and Silvertips captain Bryce Kindopp traded goals in second period before both goaltenders locked down the game in the third.

Dustin Wolf (Calgary Flames) made 25 saves for the victory. 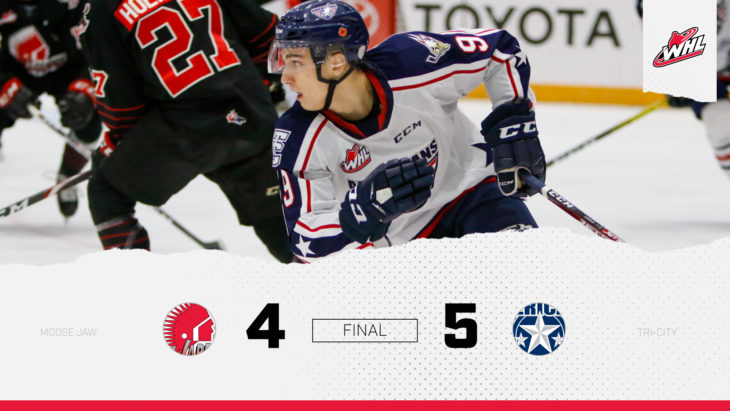 Sasha Mutala (Colorado Avalanche) completed his hat trick with 0.5 seconds left in regulation as the Tri-City Americans topped the Moose Jaw Warriors by a 5-4 score Friday in Kennewick, Wash.

Mutala scored the first two goals of the contest as part of a three-goal first for the Americans that also featured a strike by Blake Stevenson.

The Warriors then scored four-straight goals to take the lead as Logan Doust, Tate Popple, captain Owen Hardy, and Martin Lang all found the back of the net.

Edge Lambert’s 12th of the season would tie up the game before Mutala displayed his late-game heroics.

Mason Dunsford made 22 saves for the second win of his WHL career. 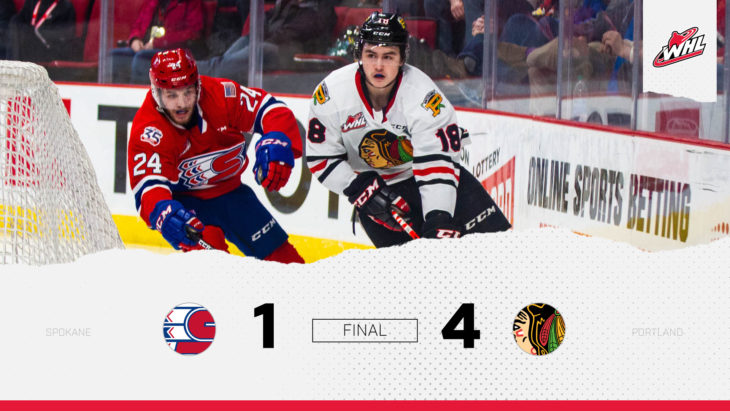 2020 NHL Draft prospect Seth Jarvis scored his 31st and 32nd goals of the season as the Portland Winterhawks topped the Spokane Chiefs by a 4-1 score.

Jack O’Brien and 2020 NHL Draft prospect Jonas Brøndberg also scored for the Winterhawks in the victory. Jarvis added a primary assist on O’Brien’s game-winning goal for a three-point night.

2020 NHL Draft prospect Jack Finley scored the lone goal of the contest for the Chiefs.