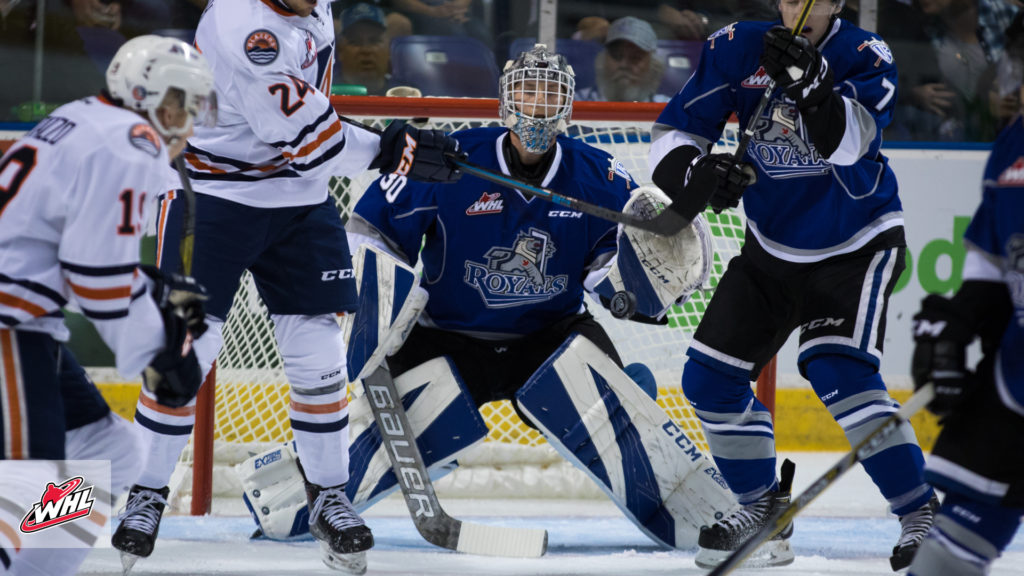 Langan’s natural hat trick came in a span of 20:14 from the end of the first until the opening moment of the third period. The Swan River, Man. product also picked up a secondary assist on Moose Jaw’s fifth goal of the game. In 180 games, Langan now has 83 points (30G-53A) in his WHL career.

2. Jordan Hollett, Medicine Hat Tigers: The Ottawa Senators prospect stopped all 26 shots sent his way Saturday as the Tigers blanked the Tri-City Americans 2-0 on home ice. Hollett stopped 10 shots in the first, five in the second, and 11 in the third for the third shutout of his WHL career.

This season, Hollett is sporting a 2.86 goals-against-average, 0.912 save percentage, and one shutout. 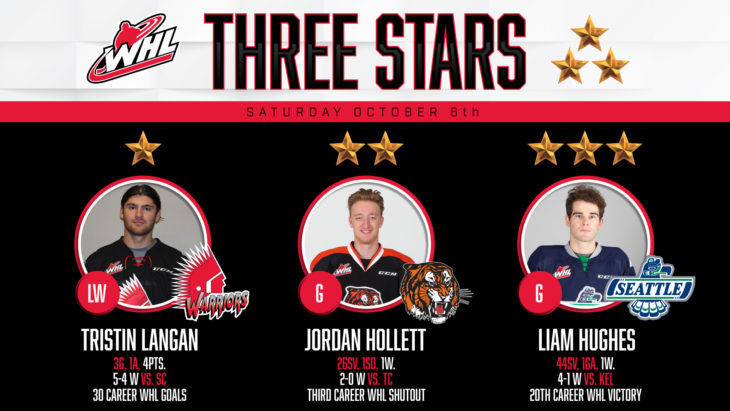 -For a second-straight night, the Swift Current Broncos came up a goal short of a victory against a Trans-Canada Highway rival, losing a 5-4 decision to the Moose Jaw Warriors. Tristin Langan recorded a hat trick as part of a four-point night while Ryan Peckford and Brecon Wood added the other goals for the Warriors. Justin Almeida (Pittsburgh Penguins) recorded three assists in the one-goal victory.

Alec Zawatsky’s third of the season for the Broncos was Swift Current’s only goal through 40 minutes, but Connor Horning, Ethan Regnier, and Max Patterson scored in the final 20 minutes to make things interesting. Ethan O’Rourke had a pair of assists in the loss.

-A five-goal second period powered the Brandon Wheat Kings to a 7-3 win over the Regina Pats Saturday in the Queen City. Cole Reinhardt managed to score on the power play with just one second left in the first period to give the Wheat Kings the first lead of the game. Brandon continued their scoring streak in the second period with a beautiful dangle from Johny Hooker resulting in a 2-0 lead over the Pats. Regina then got into the game with a nice play from Austin Pratt to put the Pats on the board for a 2-1 score. However, Brandon’s offensive drive was just too strong for the Pats which resulted in Ben McCartney, Caiden Daley, Lynden McCallum and Stelio Mattheos (Carolina Hurricanes) scoring in the second period to put the Wheat Kings up 6-1. After a goal change for the Pats to start the third, Nick Henry (Colorado Avalanche) was able to generate a quick goal for Regina. With another exchange of goals by Brandon’s Connor Gutenberg and Regina’s Scott Mahovlich, the final score of 7-3 earned the Wheat Kings their second road win of the season.

-After three shootout rounds, the Saskatoon Blades were able to break the long-standing tie in their game against the Lethbridge Hurricanes with a 3-2 shootout win. In the first period, the Hurricanes struck with a perfect snipe by Kelti Jeri-Leon, but Josh Paterson was able to put the Blades back in the game to make it 1-1. A nice tip shot by 2019 NHL Draft prospect Logan Barlage gave the Hurricanes back their advantage in the second period. Before it was too late, Blades’ forward Riley McKay squeezed in another goal for Saskatoon to tie the game before the end of the second. After a scoreless third, both teams struggled to capitalize on the subsequent overtime period, which then led to three rounds in the shootout. With 2019 NHL Draft prospect Kirby Dach scoring the lone goal for the Saskatoon Blades and Nolan Maier standing tall in goal, saving 24 of 26 shots, the Blades were able to end their Alberta road trip on a high note.

-The Red Deer Rebels extended their winning streak to five games with a 4-3 win against the Prince Albert Raiders Saturday. The Raiders started the game strong in the first period with Aliaksei Protas scoring just 12 seconds into the game. Brandon Hagel was quick to remedy the problem by putting the Rebels on the board early in the second period. Headed into the third period with a tie, both teams poured on the pressure with Arshdeep Bains and Chris Douglas scoring to put the home side up 3-1, though Prince Albert’s Sergei Sapego and Brett Leason would strike back to tie the game again at 3-3. However, Red Deer Rebels captain Reese Johnson came to the rescue with a patient goal to put the home team up 4-3 late. The win put an end to the Raiders perfect seven-game winning streak to start the season.

Ethan Anders had himself a night, stopping a career-high 49 shots in the win.

Andrej Kukuca’s first career WHL goal featured in the first period while goals from Zack Andrusiak and 2019 NHL Draft prospect Jake Lee featured in the third period. 2019 NHL Draft prospect Kyle Topping had the lone goal for the Rockets in the loss. Noah Philp and Matthew Wedman each had a pair of assists in the victory. The story of the game was Hughes though, who stopped 10 shots in the first, 16 in the second, and 18 in the third for the victory.

-The Vancouver Giants didn’t score the opening goal or the final goal of the game, but struck three times in the middle to earn a 3-2 win over the Prince George Cougars and a weekend sweep in northern British Columbia.

Milos Roman (Calgary Flames), Parker Hendren’s first career WHL goal and 2019 NHL Draft prospect Bowen Byram accounted for Vancouver’s offence in the game while Trent Miner stopped 33 of 35 shots to earn his second victory of the season. Joel Lakusta had both goals for the Cougars while Isaiah DiLaura stopped 25 of 28 shots in the loss.

-Griffen Outhouse stopped 26 of 27 shots as the Victoria Royals downed the Kamloops Blazers 2-1 to secure their status as the last undefeated team in the WHL Saturday night. Dante Hannoun broke a 1-1 deadlock 9:21 into the third period after Connor Zary and Kaid Oliver traded goals in the second period.

Making his first start of the season, Dylan Garand stopped 20 of 22 shots. Tarun Fizer, Brandon Cutler, Mitchell Prowse, and Scott Walford (Montreal Canadiens) earned assists for the Royals while Martin Lang and Nolan Kneen picked up helpers for the Blazers.

-The Spokane Chiefs held the Edmonton Oil Kings at bay to earn a 3-2 win Saturday. A beautiful stretch pass from Egor Arbuzov to Adam Beckman earned the Chiefs a 1-0 lead. The Oil Kings returned the favour with a goal by Brett Kemp just minutes later in the first. The Chiefs; however, continued to demonstrate their teamwork skills with another perfect cross-zone pass from Eli Zummack to Jake McGrew (San Jose Sharks) to give Spokane the go-ahead goal in the first. With another goal from Edmonton’s Trey Fix-Wolansky (Columbus Blue Jackets), the game was tied 2-2 in the second. Zummack wasn’t done for the night though, when he retook the lead for the Chiefs and put Spokane up 3-2, which ended as the final score for the night.

-Jordan Hollett (Ottawa Senators) stopped all 26 shots sent his way as the Medicine Hat Tigers blanked the Tri-City Americans by a 2-0 score Saturday in Kennewick, Wash. Hollett made 10 saves in the first, five in the second, and 11 in the third for the third shutout of his WHL career.

Elijah Brown and Haydin Ostir provided the offence for the Tigers. Dawson Heathcote and 2019 NHL Draft prospect Josh Williams picked up helpers on Brown’s goal while Ostir’s goal was unassisted. Beck Warm stopped 30 of 32 in the loss.

-The Winterhawks were able to capitalize with two empty-net goals against the Everett Silvertips Saturday to earn themselves a third-straight road victory Saturday. Brendan De Jong (Carolina Hurricanes) put Portland on the board with a solid grip-and-rip shot in the first, but Everett’s Bryce Kindopp was quick to even the playing field with a short-handed goal just one minute later. Rookie Seth Jarvis was also eager to get in on the scoring, providing Portland’s second goal of the night to lead 2-1 over Everett. Despite both teams battling for another goal, the score remained 2-1 until the final two minutes of regulation, where the Silvertips pulled their goaltender in a bid to pull the score even. Winterhawks’ forward Joachim Blichfeld (San Jose Sharks) then proceeded to score two empty-net goals to up the score 4-1 for Portland. Blichfled also assisted on both of Portland’s goals, earning him four points on the night. Winterhawks goaltender Shane Farkas played a crucial role in Portland’s success tonight by stopping 27 of 28 shots.