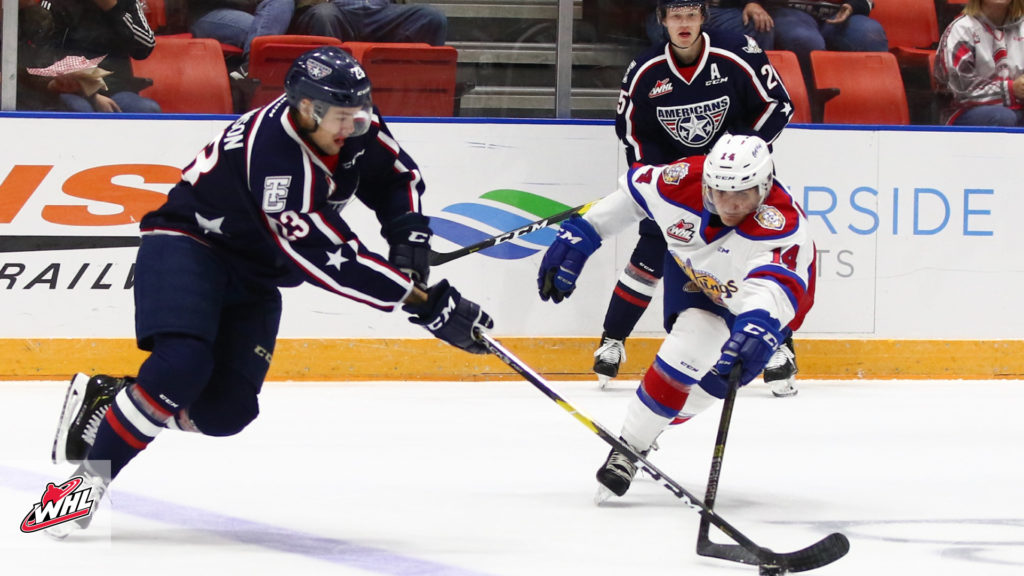 1. Kyle Olson, Tri-City Americans: The 19-year-old prospect of the Anaheim Ducks paced the Americans offense Tuesday night, securing a goal and three assists in a 6-4 victory over the Edmonton Oil Kings.

Olson’s lone tally on the night came in the third period of a back-and-forth affair, registering as the game-winning effort. Two of his three assists served as the primary variety. With five goals and eight points in five contests, the product of Calgary sits second in scoring on the Ams. Keeping pace in the tightly-contested U.S. Division, Tri-City is off to a 3-2-0-0 start this season.

2. Parker AuCoin, Tri-City Americans: The 20-year-old product of St. Albert, Alta. logged his second and third goals of the campaign, helping fuel the Americans to a 6-4 triumph over the Edmonton Oil Kings on Tuesday.

3. Vince Loschiavo, Edmonton Oil Kings: The 20-year-old product of Winnipeg continued to put the puck in the net at a ridiculous rate, adding two more goals to his tally for the 2018-19 season as his Edmonton Oil Kings fell by a 6-4 margin to the Tri-City Americans.

The five-year WHL veteran now has seven goals through nine games to start the 2018-19 season, good enough to leave him tied for second in WHL goal scoring. Only Joachim Blichfeld of the Portland Winterhawks has more goals to his name, having tallied eight in seven contests.

Despite Loschiavo’s hot hand, the Oil Kings have dropped four consecutive games after starting the season with five straight wins. 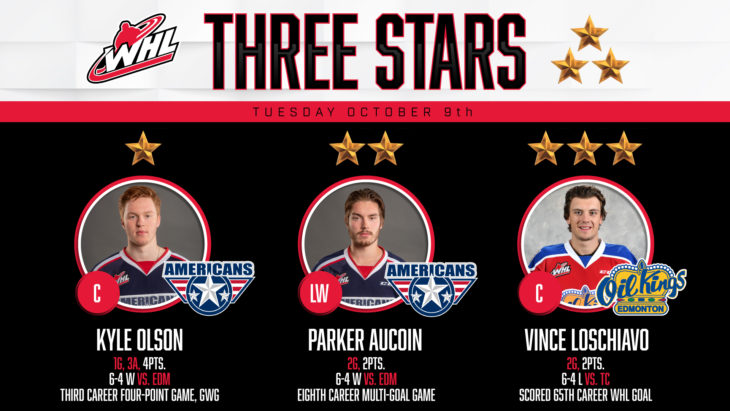 The Tri-City Americans survived a wild 10-goal contest to collect their third win of the season in a 6-4 final against the visiting Edmonton Oil Kings Tuesday night at the Toyota Centre in Kennewick, Wash.

Parker AuCoin scored twice while Kyle Olson (Anaheim Ducks) tallied four points, including the game-winning goal with 2:47 to go in the contest. Isaac Johnson  added a goal and two assists as part of a three-point effort. Vince Loschiavo responded with a pair of goals for the Oil Kings in the loss.

The first period was where the majority of the action took place as the two teams combined to tally six goals in the game. Goals from AuCoin, Johnson, and captain Nolan Yaremko came in a 6:04 span, with AuCoin initiating the scoring 37 seconds into the contest.

Refusing to go quietly though were the Oil Kings, who had Ethan Cap, Jacson Alexander, and Loschiavo’s first of the game come in a span of 6:51 to tie up the score after 20 incredible minutes.

By comparison, the second period was a low-scoring affair as AuCoin added his second of the contest and Loschiavo’s second of the game kept the two teams in a dead heat entering the third period. From there though, the Americans provided all the offence in the final 20 minutes, with Olson scoring the deciding goal and Riley Sawchuk burying the empty-net goal late in the period.

Making his debut with the Americans, Dom Schmiemann recorded a primary assist on Olson’s game-winning goal while Mitchell Brown, Tom Cadieux, and Connor Bouchard also picked up helpers. Yaremko picked up an assist for the multi-point game.

Carter Souch had a three assists in the loss for the Oil Kings while Jake Neighbours picked up an assist for his sixth point of the season.