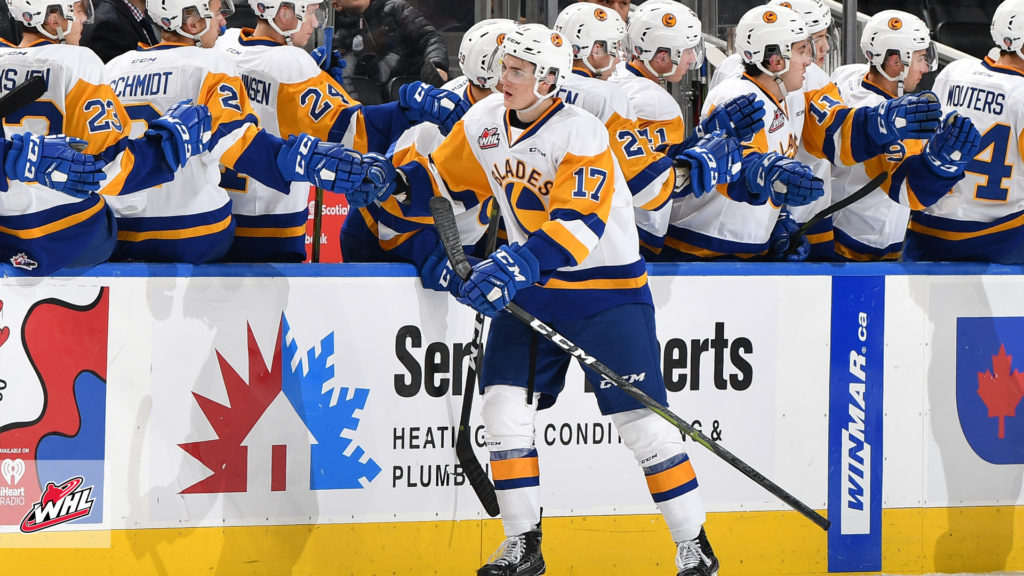 Malm scored Vancouver’s second, third, and fourth goals of the game to help the Giants move to a perfect 2-0 on the road this season. The hat trick also marked the ninth multi-goal game of Malm’s WHL career and gave him eight points (7G-1A) in five games this season, vaulting him into the WHL goal scoring lead.

2. Max Martin, Prince Albert Raiders: Defenceman Max Martin score a pair of goals and added an assist Wednesday to help guide the Raiders to a 5-1 win over the Medicine Hat Tigers and a 6-0-0-0 start.

Martin scored in the first and second periods, notching Prince Albert’s second and third goals of the contest. Martin also picked up the lone assist on the Raiders’ opening goal from Sean Montgomery. The three-point effort was a career best for Martin, topping nine two-point performances from the rest of his time in the league.

Florchuk score Saskatoon’s second and fourth goals of the contest. His first goal of the game came short handed while both of them featured primary assists from fellow Fort Saskatchewan, Alta. product Kirby Dach. Florchuk now has seven points (3G-4A) in six games this season as the Blades are 4-2-0-0. 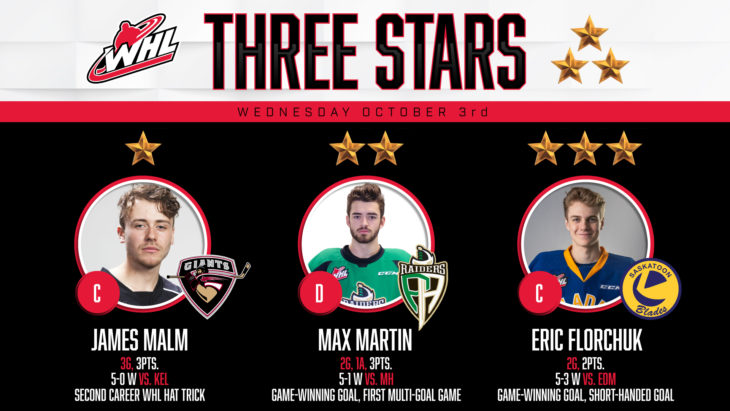 -The Prince Albert Raiders became the first team to move to 6-0-0-0 on the season Wednesday, trouncing the Medicine Hat Tigers 5-1 to begin a road trip through Alberta.

Max Martin scored twice, striking for the game-winning goal with 8:42 left in the first period while Noah Gregor (San Jose Sharks) had a pair of assists in his Raiders debut, matching a two-helper performance from Sean Montgomery. Spencer Moe, Parker Kelly (Ottawa Senatos), and Brett Leason also scored in the victory while Ian Scott (Toronto Maple Leafs) stopped 25 of 26 shots to best the Tigers for the second time in less than seven days.

Elijah Brown had the lone goal for the Tigers in the loss.

-For the first time in the 2018-19 WHL Regular Season, the Edmonton Oil Kings were on the losing side of a game, taking a 5-3 loss at the hands of the Saskatoon Blades Wednesday. The Blades’ two products of nearby Fort Saskatchewan, Alta. provided difference in the game as Eric Florchuk (Washington Capitals) scored twice and 2019 NHL Draft prospect Kirby Dach had a goal and three points.

Brandon Machado and Dawson Davidson had the other goals for the Blades while Nolan Maier stopped 32 of 35 shots.

Oil Kings captain Trey Fix-Wolansky (Columbus Blue Jackets) had a pair of goals and Wyatt McLeod found the back of the net for Edmonton in the loss. In his debut with the Blades, Brandon Schuldhaus picked up an assist on Saskatoon’s fifth goal of the contest.

-A 21-save shutout from Trent Miner and the second career WHL hat trick from James Malm powered the Vancouver Giants to a 5-0 win over the Kelowna Rockets Wednesday night at Prospera Place. Malm scored Vancouver’s second, third, and fourth goals in the game while Brayden Watts opened the scoring and Davis Koch rounded out the offensive showing.

Miner made seven saves in the first, nine in the second, and five in the third for the victory, the fourth of his WHL career and first to feature a clean sheet. Dylan Plouffe added a pair of assists while Koch picked up a helper for the multi-point effort.

-The Portland Winterhawks opened the offensive floodgates against the Kamloops Blazers Wednesday in a 7-3 victory.

Blichfeld, De Jong, Hanus, Gricius each collected an assist as well to earn the multi-point performance. Jared Freadrich and Lane Gilliss each had a pair of assists in the win.