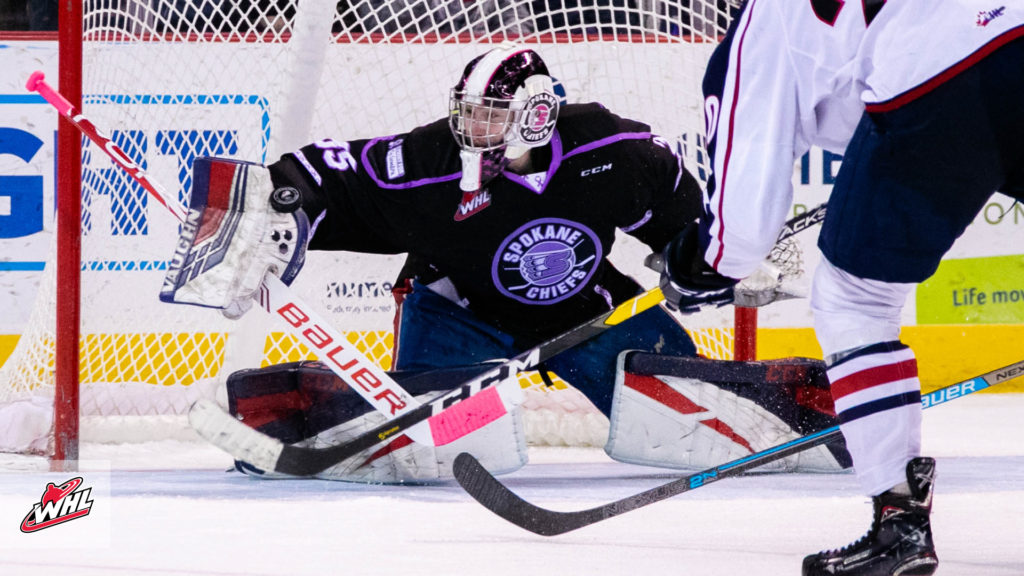 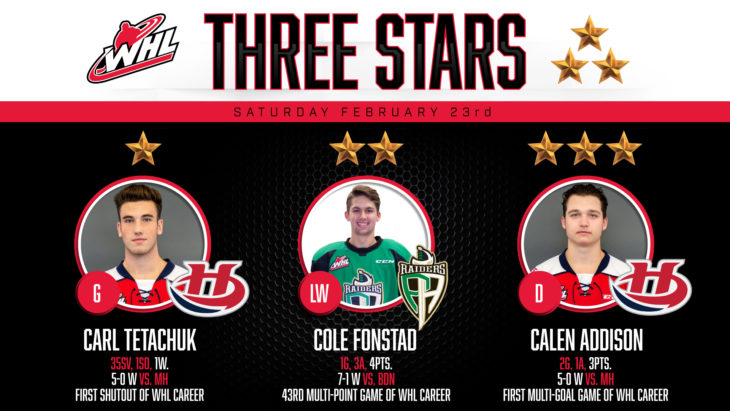 Leading 2-0 after 20 minutes, the Warriors allowed the Pats back into the game in the second as goals from Brady Pouteau and Garrett Wright came in the second. Goals from captain Josh Brook (Montreal Canadiens) and Langan in the last two minutes of the second though would restore the two-goal lead heading into the third.

In the final period of regulation, Carson Denomie potted the lone goal to close out the win. Adam Evanoff stopped 15 of 17 shots for the win.

The Prince Albert Raiders claimed the top spot in the East Division and Eastern Conference in style Saturday night.

Noah Gregor (San Jose Sharks) had a pair of goals as part of a three-point night, Cole Fonstad (Montreal Canadiens) had a goal and four points, and Ozzy Wiesblatt had a goal and three points in a 7-1 victory against the Brandon Wheat Kings.

Gregor and Wiesblatt scored in the first, but the first goal of Vincent Iorio’s WHL career brought the Wheat Kings within a goal after 20 minutes.

Jakob Brook would ignite the Raiders’ offence in the second with his sixth of the season to extend the lead to two. Gregor and Parker Kelly (Ottawa Senators) would then trade goals within 14 seconds of each other, quickly making it a 5-1 game after 40 minutes. Sean Montgomery and Fonstad scored in the third.

Ian Scott (Toronto Maple Leafs) stopped 15 of 16 shots in the win. Dante Hannoun added a pair of helpers in the victory.

Kootenay ICE 3 at Saskatoon Blades 4 (SO)

The Saskatoon Blades survived a furious comeback by the Kootenay ICE Saturday to win 4-3 in a shootout and secure their spot in the 2019 WHL Playoffs.

Kristian Roykas Marthinsen (Washington Capitals) and Gary Haden scored in the first while Jaeger White responded for the ICE to make it a 2-1 game after 20 minutes. The Blades increased their lead to two in the second as Reece Harsch netted his fourth of the season.

The ICE would push back in the third though with goals from Brad Ginnell and Jakin Smallwood to force overtime.

With back-and-forth action in the extra period, both goalies stood tall to send the game to a shootout. Kyle Crnkovic would then score the only goal of the shootout to send the Blades to victory and the post-season.

Ginnell would finish with a goal and three points in the narrow loss while Smallwood had a goal and an assist.

Dorrin Luding stopped 34 of 37 shots in the win. 2019 NHL Draft prospect Jesse Makaj made 38 saves in the shootout loss.

Picking up a much-needed two points at the end of their East Division road trip, the Calgary Hitmen beat the Swift Current Broncos 6-1.

It was a busy first period with two goals from the Hitmen by Luke Coleman and Devan Klassen’s first-career WHL goal, while Joona Kiviniemi notched the Broncos’ only goal of the night.

In the second period, Kaden Elder and Ryder Korczak both took advantage of the power play to advance Calgary’s lead to 4-1. In the last half of the third period, another Hitmen surge saw goals from 2019 NHL Draft prospect Jackson van de Leest and James Malm.

Recording the second four-point night of his WHL career, Carson Focht made the most of the Hitmen’s domination over the Broncos.

Picking up his 21st win of the season, Jack McNaughton stopped 22 shots.

Nick Henry (Colorado Avalanche) was first to get the Hurricanes on the board after finding the puck in a scramble around the net. In the second period, a flurry of action took place with three more goals from the Hurricanes. 2019 NHL Draft prospect Dylan Cozens, Jake Elmer and Calen Addison (Pittsburgh Penguins) were all able to capitalize on Medicine Hat.

In the third, a final goal from Addison, his second of the night, would finish off the game.

Winning both games in a home-and-home series against the Red Deer Rebels, the Edmonton Oil Kings continued to dominate in the Central Division.

Early in the third, Ethan Sakowich scored short-handed on a beautiful bar own shot to put Red Deer on the board. 2019 NHL Draft prospects Vladimir Alistrov and Oleg Zaytsev each exchanged one more goal for their teams before finishing the game with a score of 5-2.

Aiding the Oil Kings’ win was netminder Dylan Myskiw who stopped 21 of 23 shots.

A quiet first period led to a burst of excitement for Kelowna in the second. 2019 NHL Draft prospect Nolan Foote was able to settle a rebound on a play from Liam Kindree and 2019 NHL Draft prospect Lassi Thomson, to get the Rockets’ first goal. Just four minutes later, Mark Liwiski also capitalized on a rebounded shot from Michael Farren and Schael Higson to finish the score 2-0.

Stopping all 18 shots that came his way, 2019 NHL Draft prospect Roman Basran earned his second shutout of the season.

Vancouver Giants 4 at Victoria Royals 5 (SO)

Both teams got a little of what they wanted from Saturday’s game as the Victoria Royals earned a 5-4 shootout victory and the Vancouver Giants clinched the B.C. Division title with a single point.

Griffen Outhouse made a few outstanding saves to repel the Giants’ offence as they came roaring back in the third, eventually earning the victory in extra time.

Milos Roman (Calgary Flames) opened the scoring, but the Royals answered back in the second with goals from Brandon Cutler and Kody McDonald to take a 2-1 lead. Making it 3-1 off a short-handed goal by Dino Kambeitz early in the third, the Giants came to life.

Goals from Jadon Joseph and Davis Koch tied up the game with 4:09 left in regulation. Exactly 90 seconds later, the Royals appeared to have the game won in regulation as Logan Doust made it a 4-3 game, but the Giants came through with another goal courtesy of captain Jared Dmytriw to force the game into extra time.

The game stretched on until the seventh round of the shootout, when Phillip Schultz notched the deciding goal after a stop by Outhouse.

2019 NHL Draft prospect Bowen Byram had three assists in the loss while Jadon Joseph added a pair of helpers for the three-point game as well.

Rebounding after a loss from the night before, the Everett Silvertips hustled to a 6-2 win against the Prince George Cougars.

A strong start for the Silvertips had Wyatte Wylie (Philadelphia Flyers), Zack Andrusiak, Jackson Berezowski and Robbie Holmes take a 4-0 lead over the Cougars.

Splitting the game, Wolf stopped 18 of 19 shots before Max Palaga stepped in and stopped eight of 10 shots.

Portland Winterhawks 4 at Seattle Thunderbirds 3 SO

Battling back from a 3-0 deficit, the Portland Winterhawks emerged victorious in the shootout against the Seattle Thunderbirds.

Matthew Wedman, Owen Williams and Andrej Kukuca came out of the gate hot, scoring three goals for Seattle within the first 10 minutes of the game.

After a scoreless overtime, Shane Farkas stood strong in net for Portland, stopping all three shootout attempts from Seattle. During the game, Farkas stopped all 22 shots that came his way after he stepped into the game halfway through the first period.

The Spokane Chiefs doubled up the Tri-City Americans 2-1 Saturday at home to end an 0-2-1-0 skid in their last three games.

2019 NHL Draft prospect Adam Beckman opened the scoring on the power play 9:19 into the second period, but Americans’ captain Nolan Yaremko struck back with 3:27 to go in the period to keep the teams tied after 40 minutes.

Just 3:32 into the third, Eli Zummack found the back of the net for the game-winning goal as Reece Klassen stopped all 13 shots from the Americans in the third to secure the win. Klassen finished with 24 saves overall in the contest while Beck Warm stopped 28 of 30 in the one-goal loss.

Filip Kral (Toronto Maple Leafs) and Jake McGrew (San Jose Sharks) each picked up an assist in the win. Riley Sawchuk and Parker AuCoin picked up a helper in the loss.