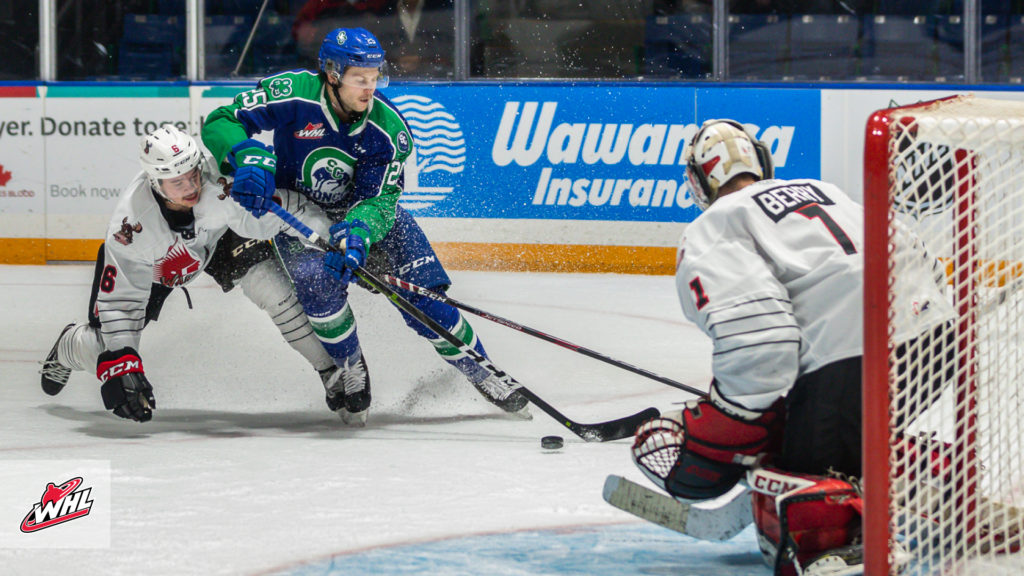 There was something for everyone on a 10-game schedule of action across the Western Hockey League Saturday. On the offensive side of the puck, the Swift Current Broncos used a four-point night from forward Jaxan Kaluski to rise to victory. For fans of close games, six of the 10 games were decided by a single goal, with the Regina Pats, Winnipeg ICE, and Seattle Thunderbirds all earning their second point in overtime or a shootout while the Kelowna Rockets, Spokane Chiefs, and Red Deer Rebels took care of business in regulation. Fans were treated to a shootout in British Columbia’s Lower Mainland as the Vancouver Giants earned another home victory while the Medicine Hat Tigers and Calgary Hitmen each allowed just a single goal in wins for stingy performances on their end. 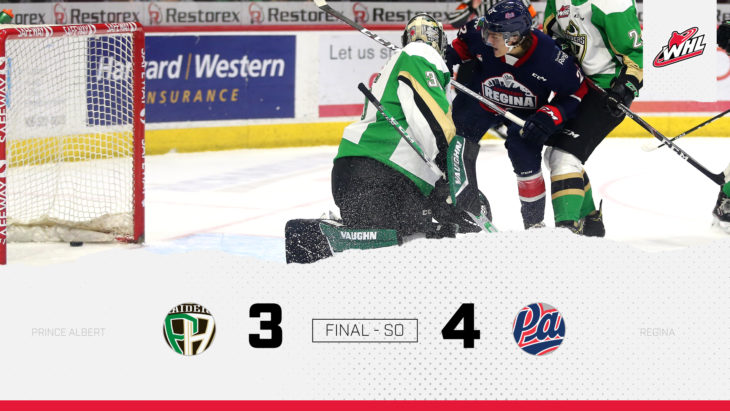 Ty Kolle scored the only goal of the shootout and Max Paddock was solid in the extra extra frame as well as the Regina Pats earned a 4-3 victory against the Prince Albert Raiders at the Brandt Centre on Experience Regina night.

2020 NHL Draft prospect Kaiden Guhle opened the scoring for the visitors, but goals from Kolle, Carter Chorney, and Logan Nijhoff put the Pats in front. Reece Vitelli would bring the Raiders within a goal after 40 minutes and Aliaksei Protas (Washington Capitals) tied up the game in the third to force extra time before the Pats squared things away.

Paddock finished with 33 saves on 36 shots through 65 minutes, then didn’t concede a goal in the shootout. 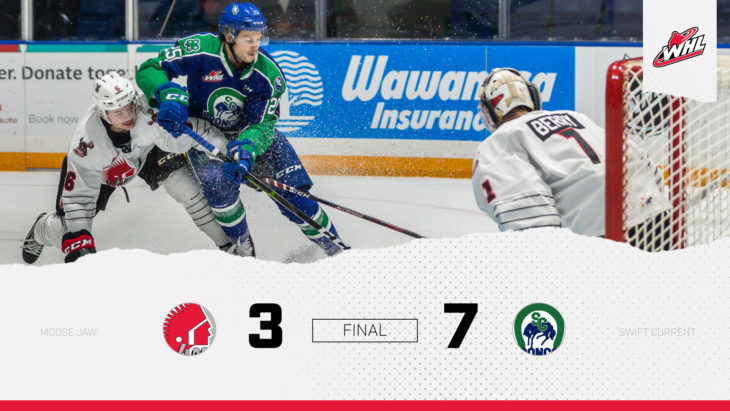 A four-goal second period powered the Swift Current Broncos to a 7-3 win on home ice against the Moose Jaw Warriors Saturday.

In his third game with the Broncos, Jaxan Kaluski scored twice and finished with four points. Captain Ethan Regnier, Brecon Wood, Sergei Alkhimov, and Matthew Culling each had a goal and an assist to contribute offensively as well. Aiden Bulych also scored for the Broncos.

Owen Hardy, Brayden Tracey (Anaheim Ducks), and Ryder Korczak scored for the Warriors in the loss.

Isaac Poulter stopped 21 of 24 shots to earn the victory. 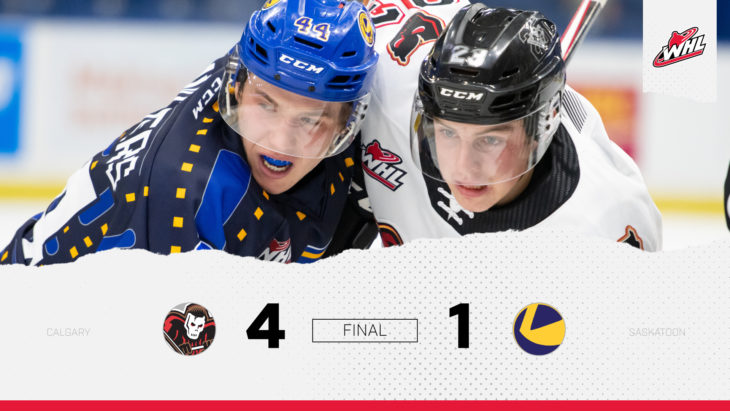 The Calgary Hitmen spoiled the party on Video Game Night, downing the Saskatoon Blades by a 4-1 score.

Hitmen captain Mark Kastelic (Ottawa Senators) scored twice while Luke Prokop notched the game-winning goal in the first period. Hunter Campbell capped off the scoring in the second after Kastelic’s second of the game. Riley McKay had the lone goal for the Blades. 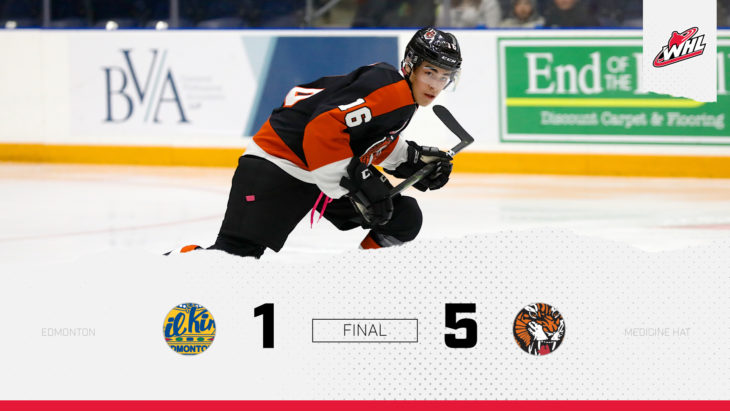 2020 NHL Draft prospect Carter Souch broke up the shutout bid, but Cole Sillinger scored in the third to restore the four-goal advantage.

Mads Søgaard (Ottawa Senators) stopped 31 of 32 shots for the victory. 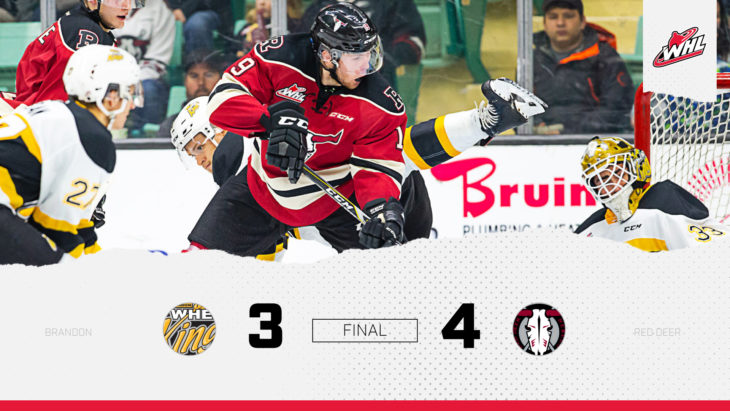 The Red Deer Rebels faced another third-period comeback by the visiting side in their building for a second consecutive game, but were able to withstand Saturday’s challenge, beating the Brandon Wheat Kings by a 4-3 score.

Arshdeep Bains, captain Dawson Barteaux (Dallas Stars), and Ethan Rowland all scored to make it a 3-0 game for Red Deer after 20 minutes, with Josh Tarzwell’s eighth of the season coming 4:10 into the second to extend the lead to four.

The Wheat Kings found the back of the net late in the second from the stick of 2020 NHL Draft prospect Ben McCartney, then followed it up with a pair of third-period goals by Cole Reinhardt made things close. However, the Rebels would hold things tight the rest of the way and pick up the pair of points.

Byron Fancy earned the win with 37 saves on 40 shots. 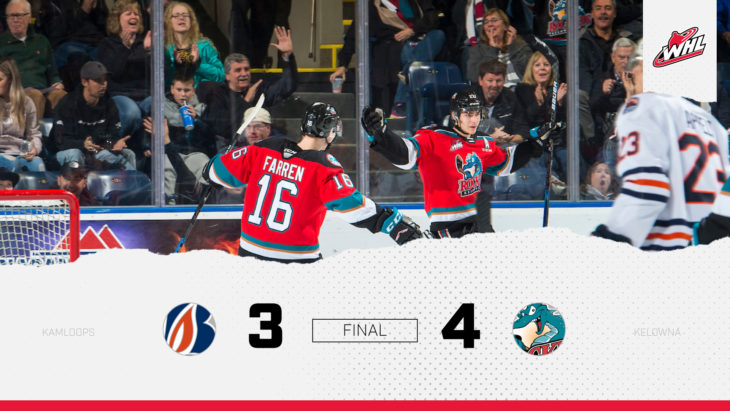 The Kelowna Rockets got themselves back in the win column with a 4-3 win against the Kamloops Blazers Saturday night on home ice.

The Rockets took their second lead of the game off Kyle Crosbie’s first of the season, but Orrin Centazzo scored later in the middle frame to keep the teams tied after 40 minutes. With the game boiling down to the third, Alex Swetlikoff struck with 6:14 to go in regulation to provide the difference.

Roman Basran stopped 27 of 30 shots for the win. 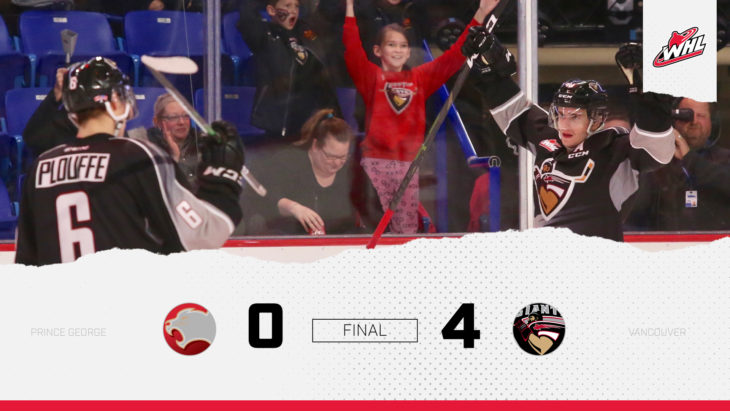 David Tendeck (Arizona Coyotes) made 38 saves to record his league-leading third shutout of the season as the Vancouver Giants blanked the Prince George Cougars 4-0 in B.C.’s Lower Mainland.

Milos Roman (Calgary Flames) netted the game-winning goal in the first and later scored the 3-0 goal. 2020 NHL Draft prospect Cole Shepard scored in the second to make it 2-0 and Tristen Nielsen rounded out the offence with his 10th of the season early in the third.

Nielsen added a pair of helpers for the three-point night and 2020 NHL Draft prospect Justin Sourdif picked up a pair of assists in the win. 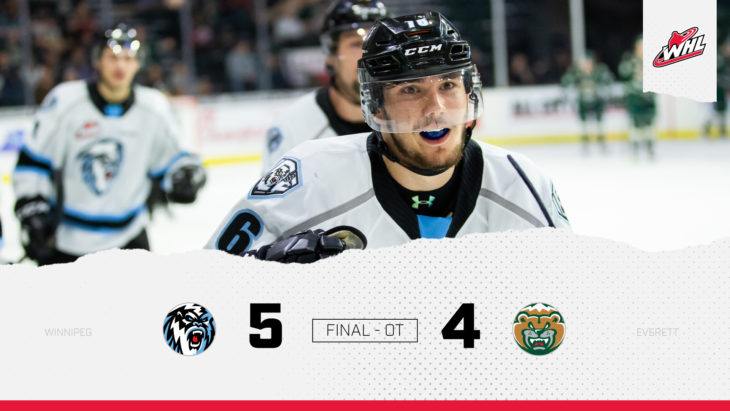 Chase Hartje scored 39 seconds into overtime as the Winnipeg ICE earned a 5-4 victory.

The ICE were rolling early with goals from Cole Muir and the first of Logan Danis’ WHL career. However, the Silvertips roared back with goals from Jackson Berezowski, Max Patterson, Brendan Lee, and 2020 NHL Draft prospect Michal Gut to earn a 4-2 lead after 40 minutes.

In the final period, Jackson Leppard and Nino Kinder struck for the ICE to force extra time, where Hartje would notch his second of the season.

Jesse Makaj finished with 23 saves to earn the win. 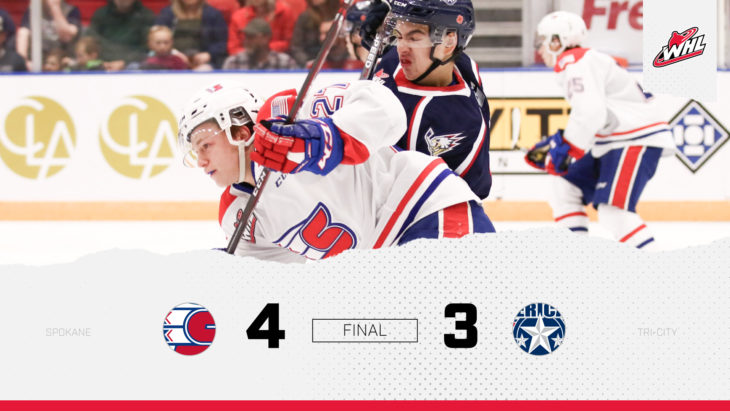 Adam Beckman (Minnesota Wild) opened and closed out the scoring as the Spokane Chiefs claimed a 4-3 road win against the Tri-City Americans.

In between Beckman’s goals, Cordel Larson and 2020 NHL Draft prospect Bear Hughes scored for the Chiefs.

The Americans got on the board in the second with goals from Krystof Hrabik and Nick Bowman, then added a goal from Blake Stevenson in the final period to tie the game up before Beckman’s game-winning goal. 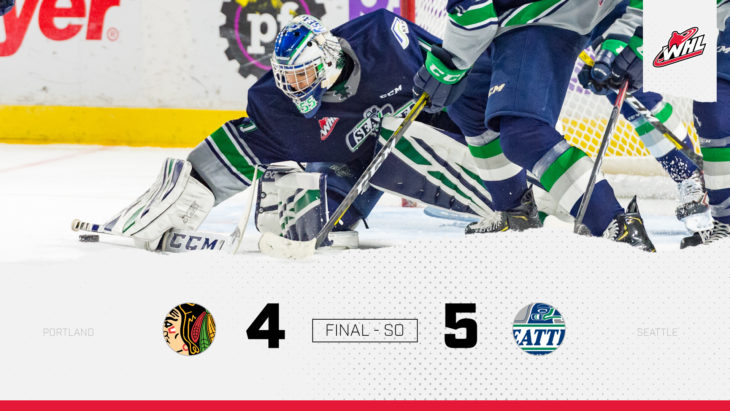 The Seattle Thunderbirds edged the Portland Winterhawks 5-4 in a shootout Saturday to cap a wild game that featured first-goal moments, an incredible performance between the pipes by Roddy Ross (Philadelphia Flyers), and a penalty shot in overtime.

Conner Bruggen-Cate and Peyton Mount put the home side up by a pair in the second, but James Stefan’s first WHL goal and a strike by Jaydon Dureau brought the teams level through 40 minutes.

Keltie Jeri-Leon put the T-Birds up by one in the third, but again the Winterhawks came back to tie as Gabe Klassen notched his first WHL goal.

A penalty shot in overtime by Henrik Rybinski added intensity to the contest but things still spilled over to the shootout. Mount and 2020 NHL Draft prospect Simon Kubicek scored while Ross turned aside both shootout opportunities for the Winterhawks.

In addition to the stops in the shootout, Ross has 47 saves on 51 shots through 65 minutes.