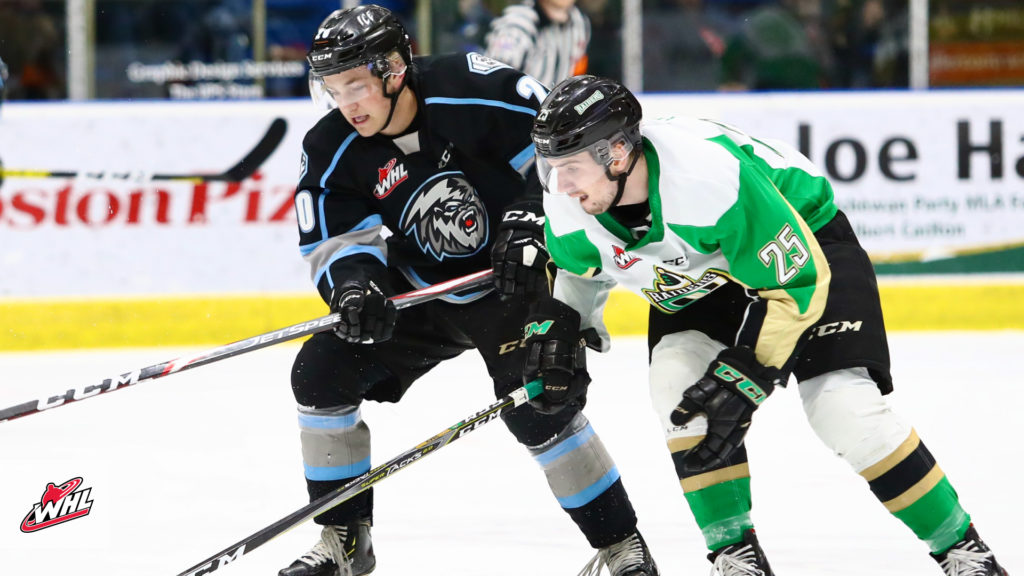 A four-game schedule of action brought Western Hockey League teams one day closer to the end of the decade. The Brandon Wheat Kings defended home turf by beating the visiting Regina Pats. The Winnipeg ICE claimed a victory in northern Saskatchewan to take over the division lead in the East. The Lethbridge Hurricanes completed a home-and-home sweep of the Swift Current Broncos. The Red Deer Rebels topped the Everett Silvertips in central Alberta while the Calgary Hitmen topped the Edmonton Oil Kings in the southern part of the province. In British Columbia, the Victoria Royals and Kelowna Rockets both claimed victories. 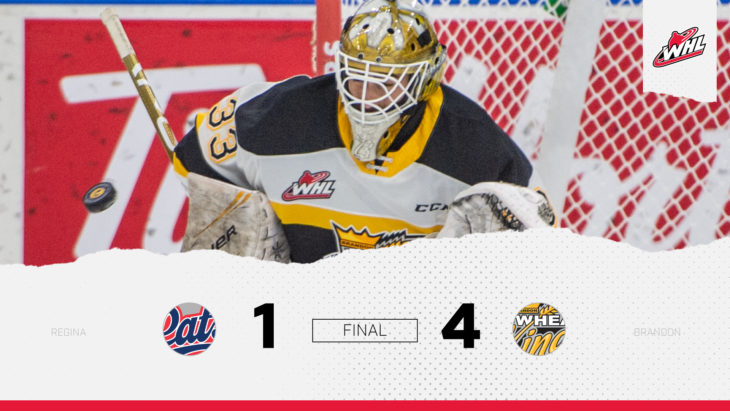 A three-point night by 2020 NHL Draft prospect Ben McCartney powered the Brandon Wheat Kings to a 4-1 win against the Regina Pats on home ice Monday.

McCartney opened the scoring with the only goal of the first period. He then assisted on their lone goal in the second and contributed to their fourth goal as well. 2020 NHL Draft prospect Ridly Greig Ty Thorpe, and Luka Burzan (Colorado Avalanche) also scored in the win. Cole Dubinsky had the only goal for the Pats in the loss.

Between the pipes, Jiri Patera (Vegas Golden Knights) made 34 saves for the win. 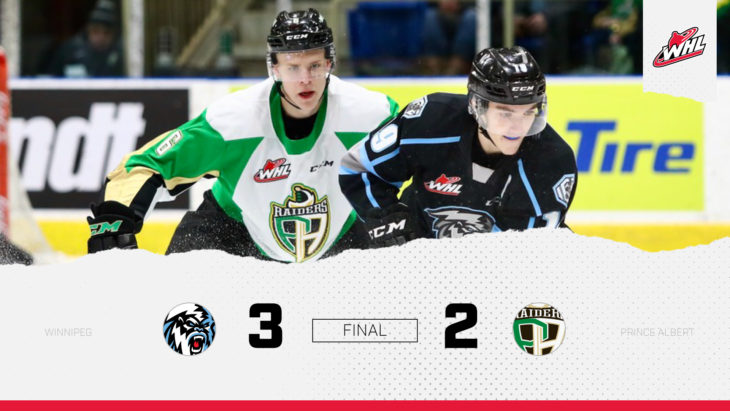 A pair of goals from 2020 NHL Draft prospect Connor McClennon opened and closed the scoring Monday as the Winnipeg ICE earned a 3-2 victory over the Prince Albert Raiders.

After McClennon’s opening goal, another 2020 NHL Draft prospect in Ilya Usau found the back of the net before Owen Pederson scored to restore the one-goal advantage for Winnipeg through 20 minutes.

Usau’s second of the game came 65 seconds into the third period to tie things up, but McClennon would provide the game-winning goal 86 seconds later.

Liam Hughes continued his strong play with a 24-save performance to earn the win.

Carson Lambos, Aliaksei Protas (Washington Capitals), and Daniil Stepanov each recorded a pair of assists for their respective sides. 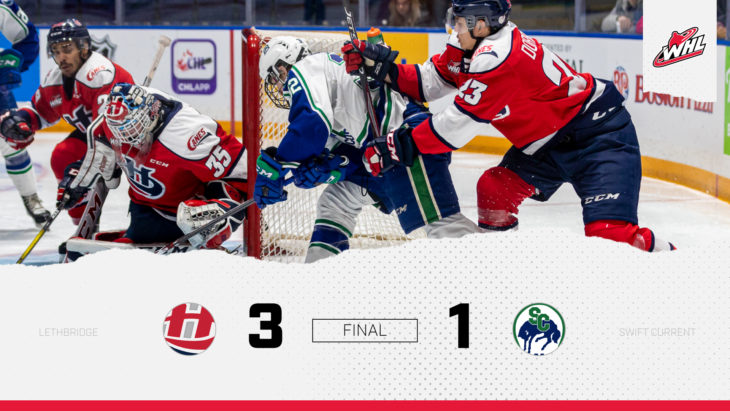 Three unanswered goals propelled the Lethbridge Hurricanes to a 3-1 win against the Swift Current Broncos Monday to sweep a home-and-home set.

Tyler Smithies had the opening goal through 20 minutes, but Logan Barlage tied up the game in the second and Justin Hall scored twice in the third to provide the difference.

Carl Tetachuk finished the game with 27 saves on 28 shots to claim the win.

The Red Deer Rebels finished their year and decade on a high note Monday, downing the Everett Silvertips by a 6-2 score.

Wyatte Wylie’s (Philadelphia Flyers) ninth goal of the season and Aidan Sutter’s first of his WHL career had the visitors rolling, but the Rebels surged in the second half of the game. Goals from Chris Douglas and Josh Tarzwell tied up the score through 40 minutes.

Both of Sorenson’s goals featured in the third as well as strikes from Davis and Chase Leslie to round out the victory.

Byron Fancy finished the game with 31 saves to earn the win. 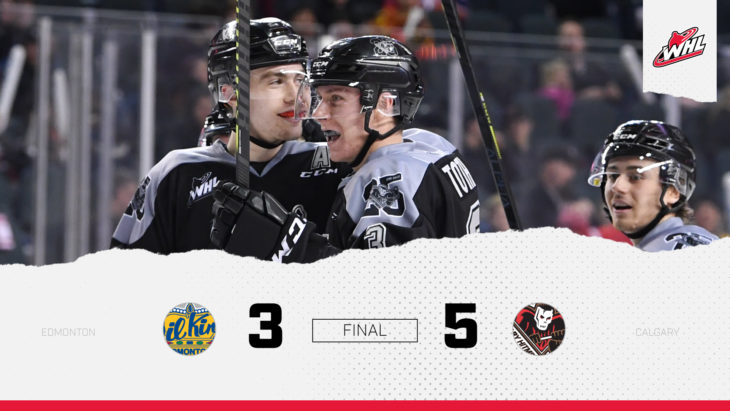 In the national spotlight Monday on Sportsnet, the Calgary Hitmen brought their A-game against the league-leading Edmonton Oil Kings to the tune of a 5-3 victory.

2020 NHL Draft prospect Jake Neighbours and Carson Focht (Vancouver Canucks) traded goals in the first. In the second, Sean Tschigerl, the first goal of Evan Toth’s WHL career, and Orca Wiesblatt’s 12th of the season featured for the Hitmen while Vladimir Alistrov and Josh Williams scored for the Oil Kings.

Jett Woo (Vancouver Canucks) provided the lone goal of the third period. Josh Prokop and James Malm each finished with a pair of assists in the win. 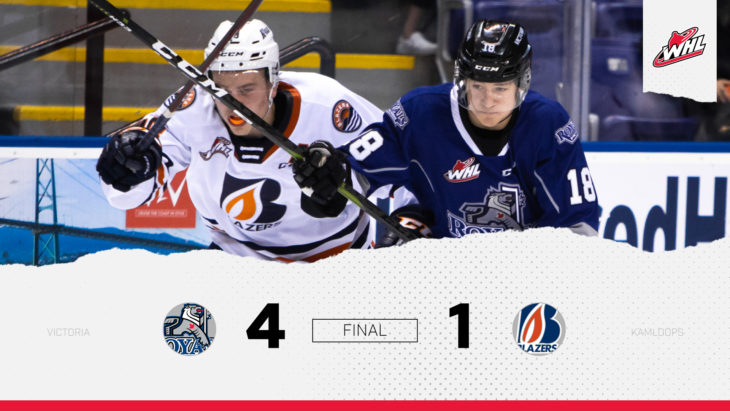 2020 NHL Draft prospect Connor Zary opened the scoring in the first period, but the Royals would take over the contest in the second and third. Tarun Fizer and Carson Miller scored in the second period, followed by strikes from Gary Haden and Fizer’s second of the night in the third.

Shane Farkas stopped 31 of 32 shots to earn the win.

Liam Kindree scored with 3.4 seconds left in overtime Monday as the Kelowna Rockets topped the visiting Prince George Cougars by a 3-2 score.

Goals from Kaedan Korczak (Vegas Golden Knights) and Mark Liwiski featured in the opening period while the Cougars responded with a strike from Cole Moberg (Chicago Blackhawks). Connor Bowie would tie up the game in the second period, which is how things would stand until extra time.